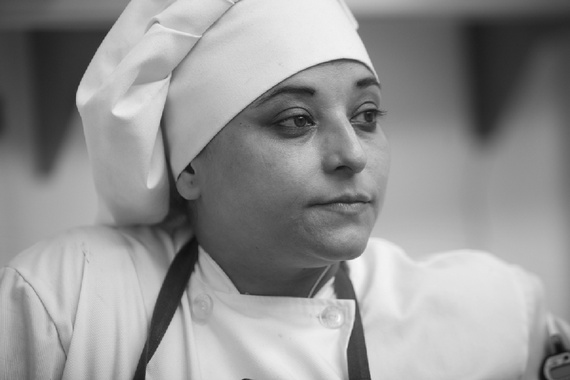 Binita Pradham is a single mother who runs a food business and raises her 4-year-old son. Photo by Barbara Reis
Workers

It Is Expensive to Be Poor

Fifty years ago, President Lyndon B. Johnson made a move that was unprecedented at the time and remains unmatched by succeeding administrations. He announced a War on Poverty, saying that its “chief weapons” would be “better schools, and better health, and better homes, and better training, and better job opportunities.”

So starting in 1964 and for almost a decade, the federal government poured at least some of its resources in the direction they should have been going all along: toward those who were most in need. Longstanding programs like Head Start, Legal Services, and the Job Corps were created. Medicaid was established. Poverty among seniors was significantly reduced by improvements in Social Security.

Johnson seemed to have established the principle that it is the responsibility of government to intervene on behalf of the disadvantaged and deprived. But there was never enough money for the fight against poverty, and Johnson found himself increasingly distracted by another and deadlier war—the one in Vietnam. Although underfunded, the War on Poverty still managed to provoke an intense backlash from conservative intellectuals and politicians.

In their view, government programs could do nothing to help the poor because poverty arises from the twisted psychology of the poor themselves. By the Reagan era, it had become a cornerstone of conservative ideology that poverty is caused not by low wages or a lack of jobs and education, but by the bad attitudes and faulty lifestyles of the poor.

Picking up on this theory, pundits and politicians have bemoaned the character failings and bad habits of the poor for at least the past 50 years. In their view, the poor are shiftless, irresponsible, and prone to addiction. They have too many children and fail to get married. So if they suffer from grievous material deprivation, if they run out of money between paychecks, if they do not always have food on their tables—then they have no one to blame but themselves.

In the 1990s, with a bipartisan attack on welfare, this kind of prejudice against the poor took a drastically misogynistic turn. Poor single mothers were identified as a key link in what was called “the cycle of poverty.” By staying at home and collecting welfare, they set a toxic example for their children, who—important policymakers came to believe—would be better off being cared for by paid child care workers or even, as Newt Gingrich proposed, in orphanages.

Welfare “reform” was the answer, and it was intended not only to end financial support for imperiled families, but also to cure the self-induced “culture of poverty” that was supposedly at the root of their misery. The original welfare reform bill—a bill, it should be recalled, which was signed by President Bill Clinton—included an allocation of $100 million for “chastity training” for low-income women.

The Great Recession should have put the victim-blaming theory of poverty to rest. In the space of only a few months, millions of people entered the ranks of the officially poor—not only laid-off blue-collar workers, but also downsized tech workers, managers, lawyers, and other once-comfortable professionals. No one could accuse these “nouveau poor” Americans of having made bad choices or bad lifestyle decisions. They were educated, hardworking, and ambitious, and now they were also poor—applying for food stamps, showing up in shelters, lining up for entry-level jobs in retail. This would have been the moment for the pundits to finally admit the truth: Poverty is not a character failing or a lack of motivation. Poverty is a shortage of money.

For most women in poverty, in both good times and bad, the shortage of money arises largely from inadequate wages. When I worked on my book, Nickel and Dimed: On (Not) Getting By in America, I took jobs as a waitress, nursing-home aide, hotel housekeeper, Wal-Mart associate, and a maid with a house-cleaning service. I did not choose these jobs because they were low-paying. I chose them because these are the entry-level jobs most readily available to women.

What I discovered is that in many ways, these jobs are a trap: They pay so little that you cannot accumulate even a couple of hundred dollars to help you make the transition to a better-paying job. They often give you no control over your work schedule, making it impossible to arrange for child care or take a second job. And in many of these jobs, even young women soon begin to experience the physical deterioration—especially knee and back problems—that can bring a painful end to their work life.

I was also dismayed to find that in some ways, it is actually more expensive to be poor than not poor. If you can’t afford the first month’s rent and security deposit you need in order to rent an apartment, you may get stuck in an overpriced residential motel. If you don’t have a kitchen or even a refrigerator and microwave, you will find yourself falling back on convenience store food, which—in addition to its nutritional deficits—is also alarmingly overpriced. If you need a loan, as most poor people eventually do, you will end up paying an interest rate many times more than what a more affluent borrower would be charged. To be poor—especially with children to support and care for—is a perpetual high-wire act.

Most private-sector employers offer no sick days, and many will fire a person who misses a day of work, even to stay home with a sick child. A nonfunctioning car can also mean lost pay and sudden expenses. A broken headlight invites a ticket, plus a fine greater than the cost of a new headlight, and possible court costs. If a creditor decides to get nasty, a court summons may be issued, often leading to an arrest warrant. No amount of training in financial literacy can prepare someone for such exigencies—or make up for an income that is impossibly low to start with. Instead of treating low-wage mothers as the struggling heroines they are, our political culture still tends to view them as miscreants and contributors to the “cycle of poverty.”

If anything, the criminalization of poverty has accelerated since the recession, with growing numbers of states drug testing applicants for temporary assistance, imposing steep fines for school truancy, and imprisoning people for debt. Such measures constitute a cruel inversion of the Johnson-era principle that it is the responsibility of government to extend a helping hand to the poor. Sadly, this has become the means by which the wealthiest country in the world manages to remain complacent in the face of alarmingly high levels of poverty: by continuing to blame poverty not on the economy or inadequate social supports, but on the poor themselves.

It’s time to revive the notion of a collective national responsibility to the poorest among us, who are disproportionately women and especially women of color. Until that happens, we need to wake up to the fact that the underpaid women who clean our homes and offices, prepare and serve our meals, and care for our elderly—earning wages that do not provide enough to live on—are the true philanthropists of our society.

Co-published by The Atlantic.