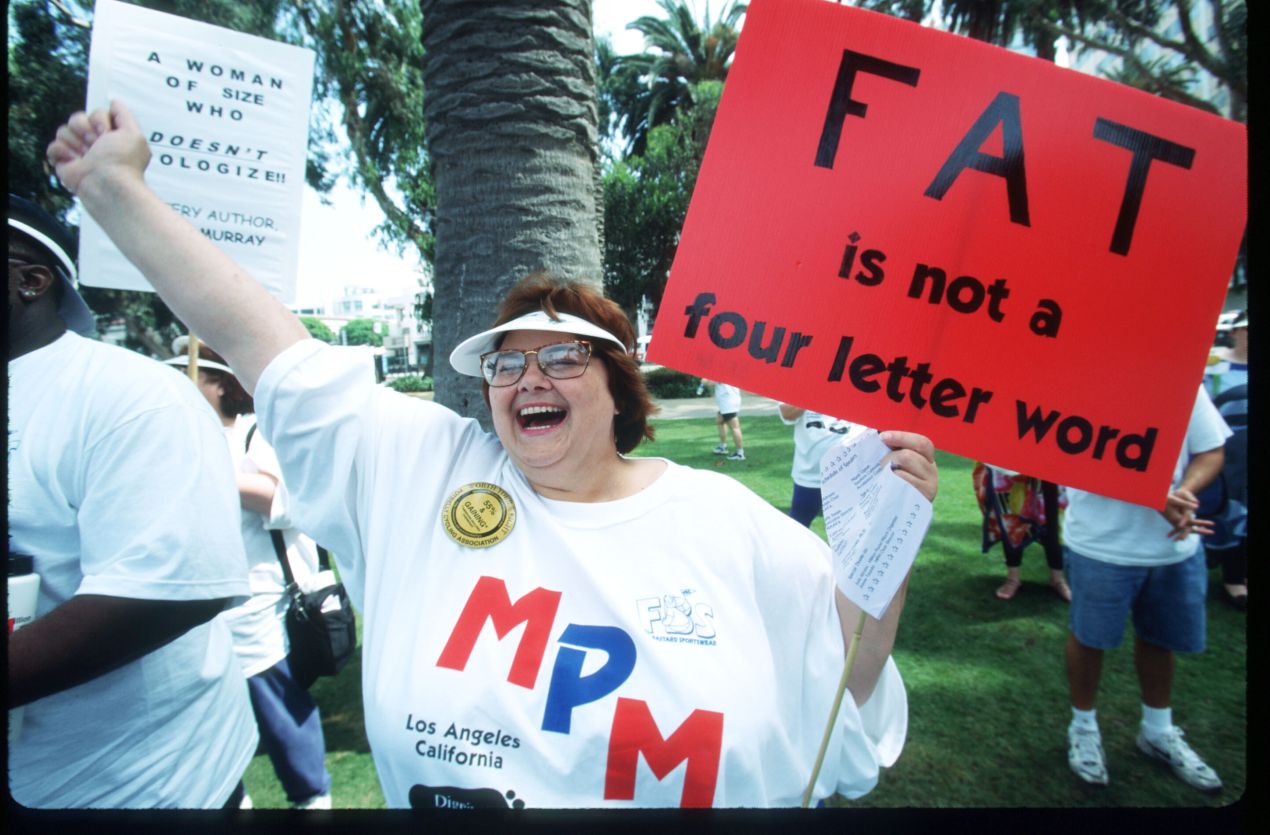 An overweight participant rallies at the Million Pound March, sponsored by the National Association to Advance Fat Acceptance. Photo by Gilles Mingasson/Liaison
Health

A few months ago, Tracy Raymond, a first-grade teacher in Palm Beach Gardens, FL, discovered that she was too fat for her school. A 50-year-old mother of two, Ms. Raymond has always carried around extra padding, but it never bothered her. “I know I’m heavier than I should be for my height, but I’m not obese,” she says. “I really don’t care.”

If the diet police has its way, she might have to start caring. Because according to her employer, her weight is a big problem—so much so that she was warned that if she didn’t lose weight and lower her cholesterol, either by participating in a wellness program or fixing the problems on her own, her insurance premiums would increase by $50 a month.

A 2013 report by ConscienHealth, a consultancy, found that 16 percent of employers require wellness program participation, including medical screenings, for access to full health benefits. Of these, 67 percent set goals for weight and/or other health indicators linked to obesity (weight, blood pressure, cholesterol, diet). But 59 percent said that their companies didn’t cover any evidence-based treatments for obesity, like fitness training, dietician, or medical weight loss clinics.

Penalizing employees for pounds is perfectly legal. Under provisions in the Affordable Care Act, 2014, employers can charge employees an extra 30 percent of the total cost (employer and employee portions) of individual or family health benefits coverage if they don’t meet specific wellness goals, including body mass index (BMI). This is up from 20 percent, which was imposed in 2006 and permitted under the Health Insurance Portability and Accountability Act regulations (HIPPAA). Prior to 2006, employees couldn’t be penalized for missing a wellness target. “You could offer them nominal incentives to engage in activities like participating in a class, but you never could penalize them for actually smoking or not losing weight, or having high blood pressure,” said Karen Pollitz, a senior fellow at the Kaiser Family Foundation, in Washington, D.C.

Although the law requires employers to give employees an alternative way to avoid the penalty if he or she can’t meet the mandated health goal, the employee might still end up spending money. For instance, the employer might set a weight loss goal that the employee still can’t meet, or suggest the worker attend a fitness class. Those who opt out would accrue some financial penalty.

“Employers,” notes Timothy S. Jost, professor emeritus at Washington and Lee University’s School of Law, “like to control the lives of their employees.” 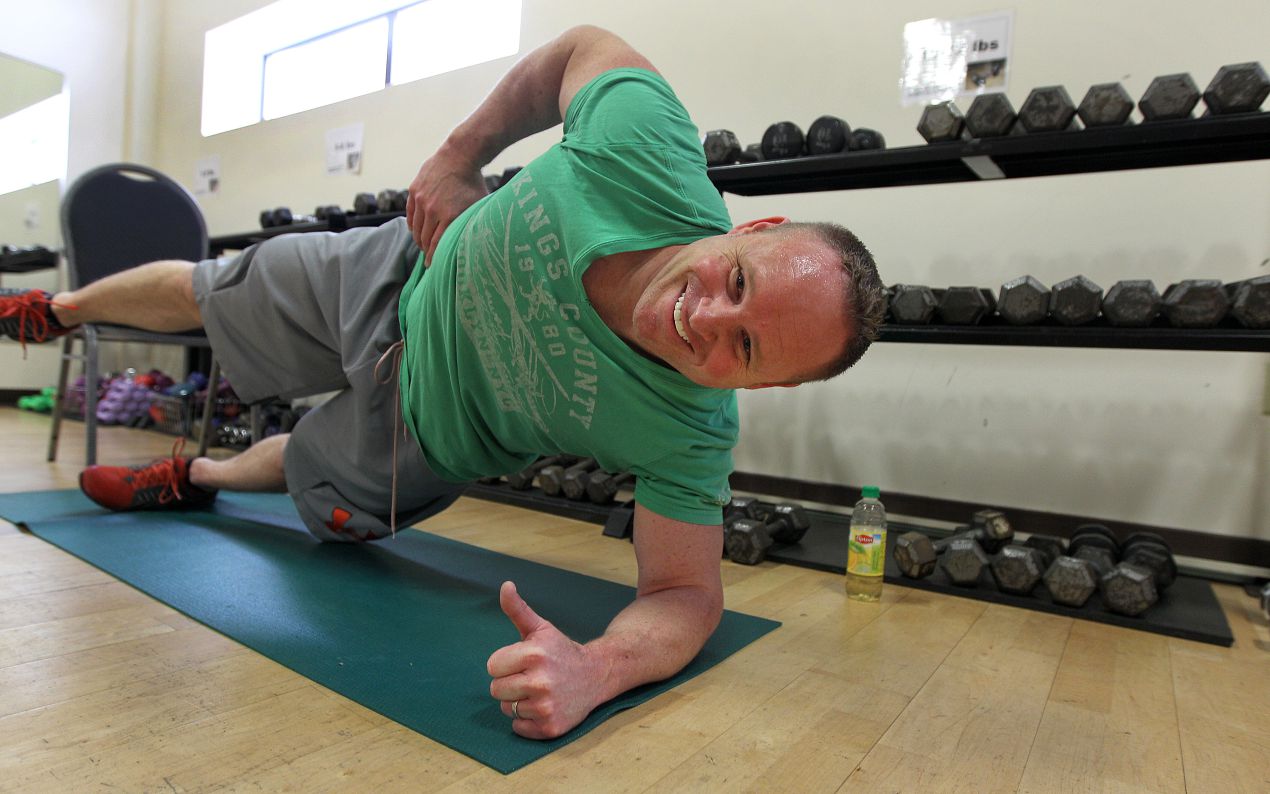 Corporate Wellness is all the rage. Photo by Pat Greenhouse/The Boston Globe via Getty Images

Cheryl Renfro, 46, worked at Hospital Corporations of America, in Nashville, until 2012. In 2004, Ms. Renfro underwent bariatric surgery and lost more than 200 pounds. Still, her BMI exceeded the acceptable limit for her company’s wellness program, and she had to provide a letter from her doctor stating that she was in good health, or else she would most likely be assigned bottom-tier insurance coverage. “You’d have to take time off from work, and pay the co-pay for the office visit,” she says. “It was a hassle.”

The underlying thesis is that companies are doing something good by helping employees get into shape—and saving themselves money in health costs.

“I absolutely do think they’re a good thing,” says Bruce Elliott, manager of compensation and benefits the Society for Human Resource Management (SHRM), in Alexandria, VA. “Depending on how your plan is structured, it can incentivize or de-incentivize you.”

According to SHRM’S 2015 Employee Benefits Survey, which was released in June, more than two-thirds of respondents from organizations that offered wellness initiatives indicated the initiatives were “somewhat effective” or “very effective” in reducing the costs of health care in 2014 (72%), 2013 (71%) and 2012 (68%).

Yet studies have turned up scant evidence proving these programs save employers money. In a March 2013 study in Health Affairs, researchers reviewed randomized controlled trials of workplace wellness programs. They found that any savings to employers were most likely the result of cost shifting to employees with higher health risks, like obesity. A November, 2014 report in the same publication noted that these programs “increase, rather than decrease employer spending on health care with no net health benefit. The programs also cause over-utilization of screening and check-ups in generally healthy working-age adult populations, put undue stress on employees, and incentivize unhealthy forms of weight-loss.”

In fact, many critics feel that what it really amounts to is thinly veiled fat discrimination.

Most wellness programs, roughly a six billion dollar a year industry, typically target exercise habits and drug and alcohol use. But those behaviors, experts point out, are changeable, whereas size is more complex. Body weight “is a physical characteristic that is much more stubborn,” says Ted Kyle, chairman of the Obesity Action Coalition, in Pittsburgh and a former executive at GSK Consumer Healthcare who worked on Alli, the anti-obesity drug. “BMI is a calculation based on two factors—height and weight. We have it drummed into us that weight is under our control. But as a matter of fact, weight is not under your control more than height is. So, how absurd would it be if an employer started setting goals for how tall you could be?”

“There are plenty of employers that are trying to do something good, but there are some that are using [wellness programs] as a tool for shifting costs to people with chronic diseases,” he continues. “A lot of these programs get corrupted by the assumption that somebody’s body size is a matter of choice, and that’s simply not so.”

Abigail C. Saguy, professor of sociology at UCLA and the author of What’s Wrong With Fat? agrees. “It gets framed as ‘incentive,’ but there’s this unquestioned assumption that if you’re fat then you’re not eating well and not exercising,” she says. Obesity, she adds, is considered a moral failing, caused by a major lack of willpower. “If that’s how you see the world, then it makes sense to say we will reward them if they start eating better and exercising. It transforms a complex issue into a simple question of responsibility and blame.”

According to Mr. Jost, wellness programs gained legal recognition under the Health Insurance Portability and Accountability Act of 1996 (HIPAA), which allowed group health plans to offer incentives to employees for participation in wellness programs for meeting certain requirements. Those who didn’t participate were penalized.

Still, questions remain as to the legality of certain aspects of wellness programs. Three percent of companies with 200 or more employees, for example, won’t let staff have health insurance at all unless they complete a health risk assessment (HRA), an intrusive questionnaire with a host of personal questions unrelated to job performance: “Do you drink alcohol? “Do you smoke?” “How often do you exercise?” “ “How many hours do you sleep at night?” “Are you happy in your marriage?”

Not surprisingly, many employees feel uncomfortable sharing that kind of personal information with their bosses.

Here’s where things get tricky. Although ObamaCare permits these penalties, under the ADA, it’s illegal to force employees to undergo medical exams or answer questions about their health—unless the questions are directly related to their job performance (itself debatable). It only allows medical inquiries and exams that are unrelated to the job if they’re voluntary and part of an employee health program.

This, in turn, begets another question: When is a wellness program voluntary?

And here’s where things get even more murky. “If it’s going to cost you thousands of dollars a year if you decline to answer—that’s not voluntary,” says Jennifer Mathis, director of programs at the Bazelon Center for Mental Health Law, in Washington. “The ADA’s requirement that wellness program medical questions or exams be voluntary means that employees cannot be charged steep financial penalties for declining to answer or be tested. I think the concern of the hour has been more that the new proposed ADA regulations take away some existing protections and force people to reveal medical info and take medical exams that are supposed to be voluntary, thus forcing people into discriminatory situations in their workplace.”

As it happens, the U.S. Equal Employment Opportunity Commission (EEOC) has filed cases under the ADA against Orion Energy Systems, in Manitowoc, Wis., for requiring an employee to submit to medical exams and inquiries that were not job-related and consistent with business necessity as part of
a so-called “wellness program,” which was not voluntary. The employee was fired when she objected to the program.

The EEOC also alleges that Flambeau, Inc., a Baraboo, Wis.-based plastics manufacturing company, violated federal law by requiring an employee to submit to medical testing and assessment in connection with a “wellness program” or face dire consequences.

In April, the EEOC issued a Notice of Proposed Rule-Making (NPRM) on the intersection of the ADA, which prohibits biometric testing that is not job-related, and the ACA, which permits employers to either reward or penalize employees based on their participation in Wellness programs that might require biometric testing. It is unclear when the final rulings should be issued, says Justine Lisser, a spokesperson for the EEOC.

In the meantime, Ms. Raymond, the first grade teacher, is not planning to complete the six weeks of mandated phone counseling with a nutritionist (time, some might argue, better spent teaching kids). Instead, she has opted to pay an extra $600 a year—or $25 per paycheck out of a salary that is not large to begin with.

“Suppose I jump through hoops—and next year I still don’t pass—are they going to drop me from coverage?” she says. “If I wanted to lose weight, I would. But I’m certainly not going to do it for people at my job who want me to do it.”

Mr. Kyle of the Obesity Action Coalition sums it up this way: “You should never go around telling people what they ought to weigh.”

Abby Ellin is an award-winning journalist, former columnist for the New York Times, and author of Teenage Waistland: A Former Fat Kid Weighs in On Living Large, Losing Weight and How Parents Can (and Can’t) Help. Her work has appeared in a range of publications, including The New York Times, Newsweek, Time, ABC News, The Daily Beast, The Village Voice, Marie Claire, More, Self, Glamour, and Spy (RIP). But her greatest claim to fame is naming “Karamel Sutra” ice cream for Ben and Jerry’s.

Co-published with the The New York Observer. 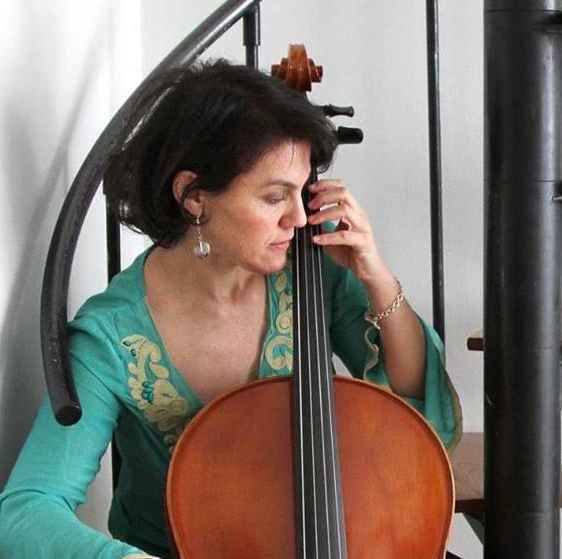