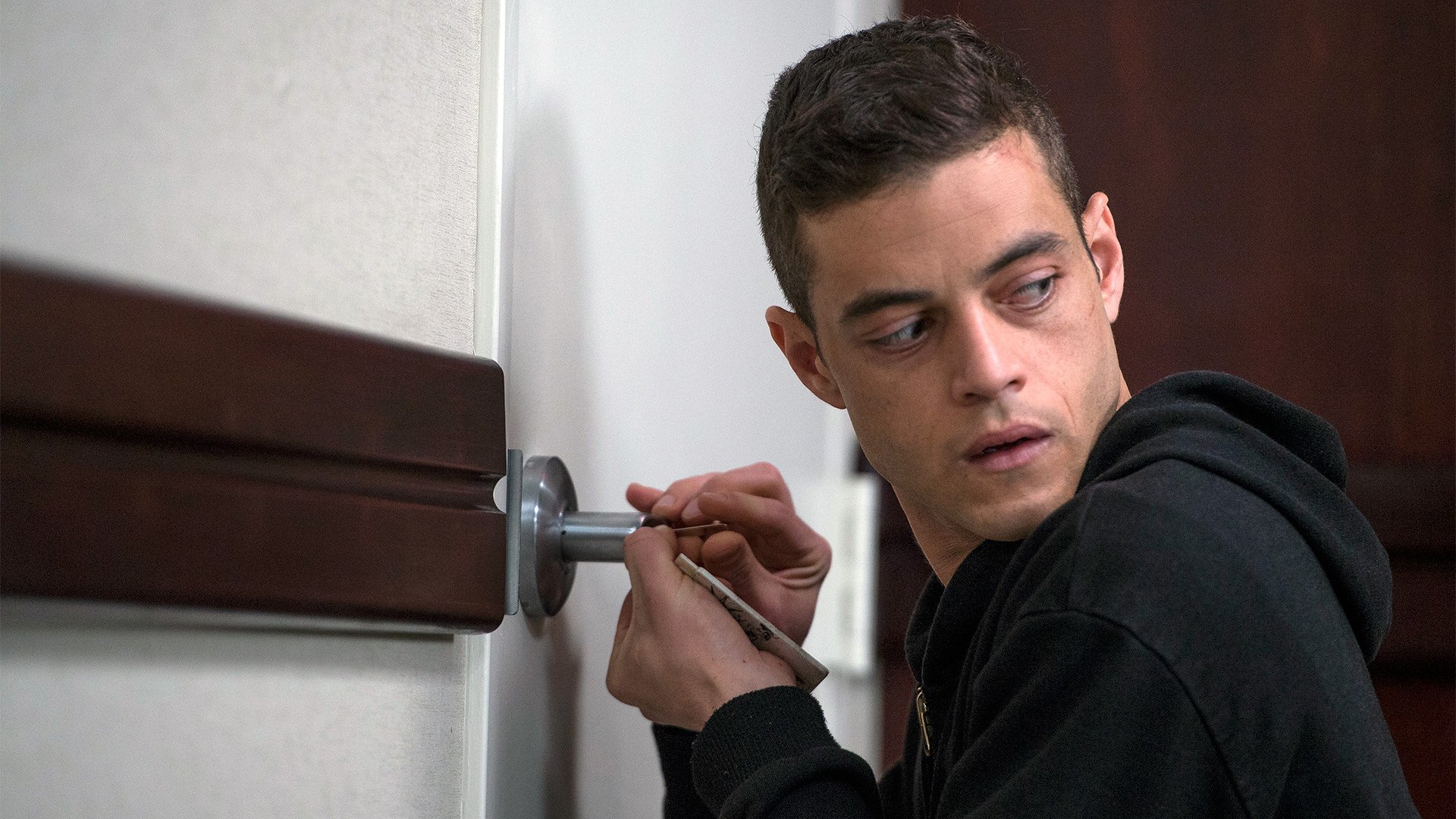 Elliot Alderson can’t make small talk even though, or perhaps because, he is a near genius. He is a beautiful hipster, in a fragile bug-eyed way (think Bushwick Egon Schiele), but has trouble finding a girlfriend. The coder spends his spare time hacking his female best friend Angela’s student debt, in the hopes of easing her monetary suffering. By day he works at cybersecurity company Allsafe; by night he works to take down companies like it with an anarchist group similar to Anonymous called fsociety. Its goal is to cancel all debt. One of fsociety’s targets is E Corp, a Bank of America–meets-Google mega-conglomerate, which also happens to be Allsafe’s big client. This is not a real-life hacker case or a brilliant play about surveillance. Rather, it’s the plot of a hot new cult cable television series on the USA Network called Mr. Robot, and the latest example of an emerging genre I have come to think of as inequality entertainment.

A few years after Occupy activists stormed Wall Street, the storyline of the 99 percent versus the 1 percent has officially entered into the mainstream, alchemized into binge TV. Take the Emmy-nominated Silicon Valley, in which the huge gap between ramen-eating, couch-surfing, low-end tech workers and their 1-percent, tech-guru overlords is the show’s main source of drama and humor. Or the 2013 $115 million Matt Damon–vehicle Elysium, in which the poor live on a hot, diseased version of earth while the wealthy live in a space station where they never get ill, and which io9 called a “futuristic version of Occupy Wall Street.” Or the chicly meandering Web (now HBO) comedy High Maintenance, in which a pot dealer traipses between clients who are often members of New York City’s fallen middle class, including, yes, one of the “hipster homeless.”

The new inequality entertainment is far from stuffy, punitive docudrama about the horrors of American debt. It is dystopian or quirkily comic rather than tiringly serious or triumphantly simpleminded. (Norma Rae this is not.) The absurd tech-titan excesses in Silicon Valley—the venture capital toga parties, the private Kid Rock concerts—are starkly contrasted to life at the lower rungs, where a desperate aspirant pitches his app to customers at the liquor store where he works. Venture firms may try to buy Silicon Valley’s hero’s company, Pied Piper, offering up to $20 million, but the show keeps reminding us how easy it is to descend from extreme tech entrepreneurial exuberance to TaskRabbit-y wage slavery. The offers for Pied Piper are retracted: Our heroes are back to penury and couch-surfing, to the antic, aggrieved world of 24/7 coding in airless rooms. 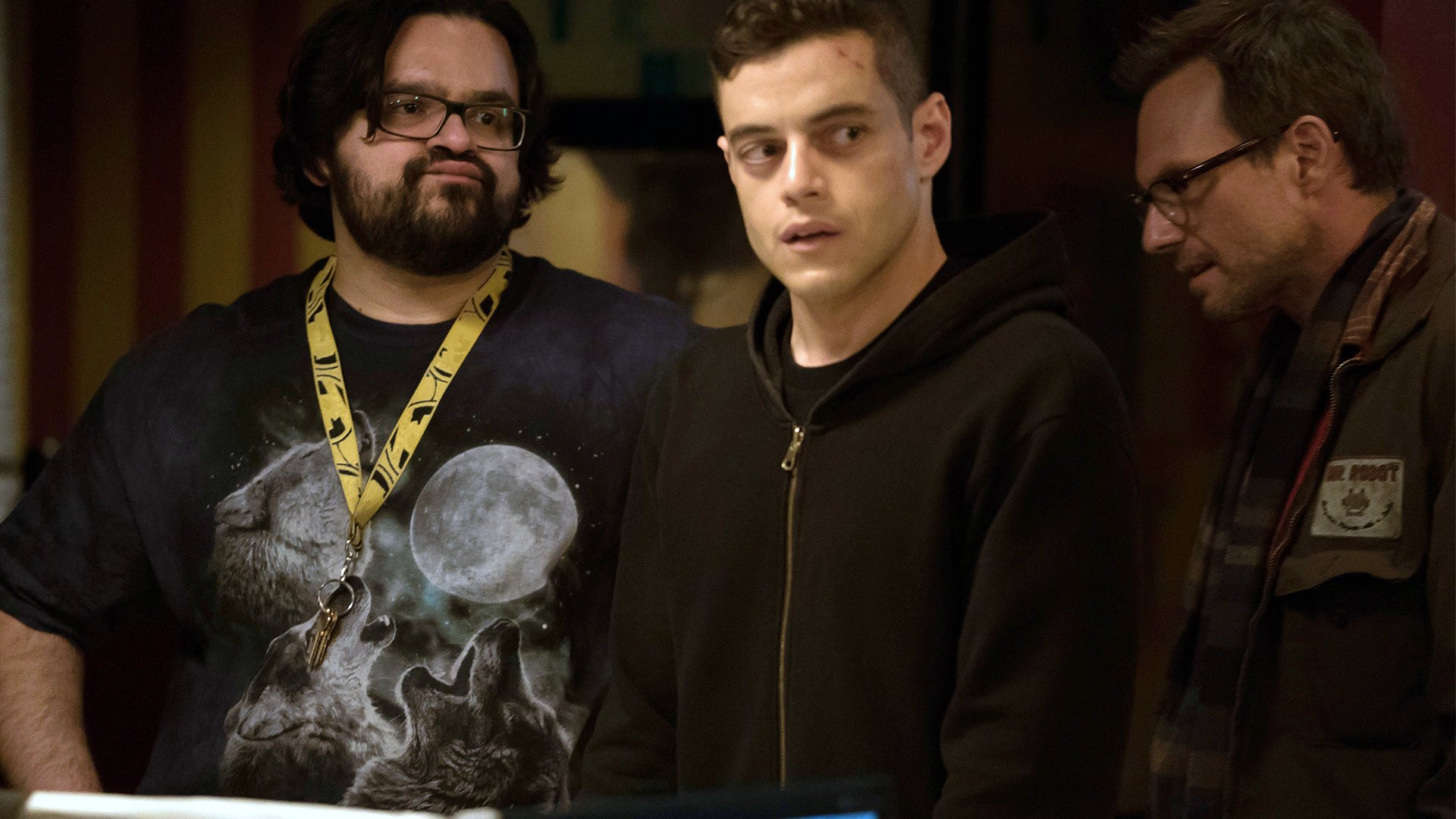 Mr. Robot in particular, signals the rise of a fresh post-Occupy portrayal of the wealth gap. No longer is the story of income inequity delivered via a well-meaning, crushingly earnest indie film by John Sayles, or in a single laugh line on Roseanne. Mr. Robot has a supercute protagonist (played by Rami Malek), a melodramatic plot, stunt casting (Christian Slater), and a cyberpunk aesthetic. While it is edgy, head-on about debt and the digital, it doesn’t say outright that it is about, say, Anonymous, the NSA, Edward Snowden, or Strike Debt. It clearly is.

The show’s creator, Sam Esmail, drew on his personal experience with student debt. (He has said that he just finished paying off his loans this year.) He has also woven the Arab Spring into the show’s unsparing binaries. (Esmail is Egyptian-American.) But it also has club scenes, cocaine scenes, and a campy, slightly dated futurism that recalls Memento or Strange Days. Our hero, Alderson, with his goblin-as-male-model looks, is given to deadpan, enraged voiceovers about the horrors of the contemporary human condition. “Our encryption is the real world,” Mr. Robot says at one point, meaning it is safer for digital activists to exchange information IRL than online. “Since when did ads infect our family albums?” it’s said at another. “Since when did one become greater than 99?”

The new inequality entertainment isn’t only about tech decadence (techadence?) or hacktivists. This summer’s brilliant new David Simon offering, Show Me a Hero, is a hybrid of old and new, bridging the divide between depressing realist films of the past and the millennial anti-debt activism of Mr. Robot. While it is set during an epic struggle over affordable housing in Yonkers in the late 1980s, Show Me a Hero displays a heightened awareness of the sharp divisions we are facing now.

Unfortunately but not surprisingly, men rule this new genre, as they do so many others. These shows and films feature a range of types—brogrammers, a pot dealer, a small-time politician—but they all have XY chromosomes. This somehow means they must violate social norms and rescue women at the same time. On Mr. Robot, Elliot invades the privacy of the women in his life in order to “save” them, by improving their credit or their dating lives. (I held my breath while he performed his acts of quasi-salvation, hoping he wouldn’t accidentally doxx these damsels in the process.)

Despite their limits, these shows do suggest that at least some minds in the world of entertainment are thinking a little bit differently about debt, about surveillance, and about start-up culture. Ideas that were once on the margins are moving into the mainstream, these shows seem to say, and at a faster clip, changing what we can expect from our distracting screen culture: Binge TV can have a conscience.

Alissa Quart is the Editor in Chief of EHRP, a journalist, and the author of three non-fiction books, Branded, Hothouse Kids, and Republic of Outsiders, as well as the poetry book Monetized.