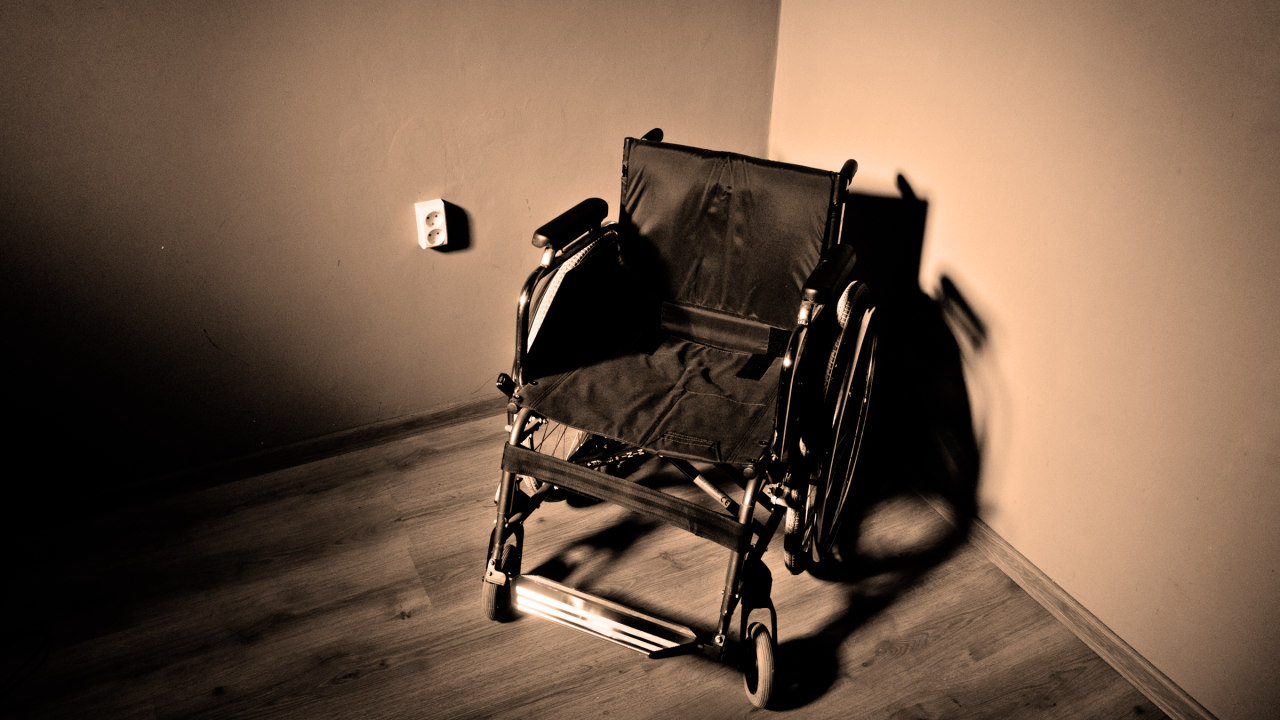 The Right to Be Loved

Anna Stubblefield was convicted of raping her disabled student. I have a problem with that.

Over the last few months I have caught sporadic comments from disabled friends about a New Jersey trial they found deeply troubling. It wasn’t until I saw the New York Times Magazine story “The Strange Case of Anna Stubblefield” that I understood what they were talking about.

On October 2, Stubblefield, an associate professor of philosophy at Rutgers-Newark and disability studies scholar, was charged with two counts of aggravated sexual assault for allegedly engaging in non-consensual sexual activity with a man the Times refers to as “D.J.,” who the jury believed was unable to consent and who Stubblefield claims is the love of her life. D.J. is now 34, has cerebral palsy, and cannot speak. The court case hinged on whether he could communicate using a controversial method called Facilitated Communication, where a helper sets up a device and provides support to a subject while they point to select pictures, words, or letters. While the method has defenders, detractors argue it can be abused. Bizarrely, however, the defense was not allowed to bring in experts to defend the technique.

Many disability activists I know acknowledge the ambiguities circling around Facilitated Communication. They have mixed opinions of Anna, noting the striking power differential in their relationship beyond the question of disability: She was a successful academic, while he lived with his mother and had never had a job. Nevertheless, what concerned them the most was that once Facilitated Communication was called into question, there were no attempts to provide D.J. with access to alternative means of communication so that he could have a voice in the trial that would determine his future.

It isn’t simply that the trial was not accommodating to his needs. My friends felt the court was suffused not only with discriminatory attitudes about disabled people in general but also with assumptions about D.J. himself, including the assumption that his mental capacities could be judged simply by looking at him. They felt D.J. was not treated like a human with desires and dreams of his own, nor as someone who might be desirable to and dreamed of by someone else. Instead he was, in the words of the New York Times, “presented by the prosecution as a demonstrative exhibit.”

I asked one of these friends, a graduate student and disability advocate who goes by Julie Equality and who attended the trial, to share with me why she found the “strange case,” for which Stubblefield now faces up to 40 years in prison, so heartbreaking. Her sentencing is scheduled for January 15.

On September 9, I went to witness the opening day of testimony in the trial of Anna Stubblefield. I went with two friends, one who has polio and uses a wheelchair and one who has cerebral palsy and uses a device called a “Lightwriter” to communicate.

I wasn’t prepared for the wave of emotions that would hit me.

Living with cerebral palsy since birth, I’ve seen and known many people with variants of the condition and other disabilities. I’ve encountered stereotypes and prejudice, yes. But I have also encountered so many positive examples of what disabled people, even “severely” disabled ones, can achieve. They can be interdependent with the right supports like home care, wheelchairs, communication devices, etcetera.

I use the term “interdependence” and not “independence” on purpose. We all know the phrase “No one is an island.” All of us, even able-bodied people, are interdependent. We all use devices for mobility, for communication.

Disabled people are more likely to live below the poverty line. We are more likely to be unemployed, to be victims of violence. We are often isolated in “special ed” classes or locked up in institutions. The general public sees disability as something to pity, partly because they may not encounter many positive examples of us even though we live in a multimedia era. There are many films and blogs about how disabled people can live full independent lives with the right support systems.

At the trial, I doubted the jury knew about all the disabled people living successful, happy, interdependent lives in communities. It occurred to me that to not know what is possible for someone to achieve puts them in a kind of jail, one made of limited expectations.

It is my feeling that D.J. is being denied his rights to live fully and to be in pursuit of the life that he’d want for himself.

At the hearing, there were many ableist assumptions on display. For example, Anna’s lawyer stated, in his opening remarks that D.J.’s mom was quoted as saying—I’m paraphrasing here—“I don’t see how anyone can love a person with a disability.” (After the trial, a juror told a journalist basically the same thing: “I was like…’You’re going to leave your husband and your kids for someone like this?’”)

If D.J. was allowed to explore the world beyond his current situation, I wonder how he would blossom. He seemed to be doing well and was supported by his family in being educated in a college class. But once it was known that he had become a sexual being, that’s when the tide turned.

I also had to wonder: If the argument is that he wasn’t able to consent to the acts of intimacy he experienced with Anna, then can’t one argue that he didn’t consent to being paraded in the court room to the jury?

That’s what I thought when D.J. came into the courtroom. I had expected him to enter the room using a wheelchair, walker, or crutches. Instead he was physically supported by his mother. He looked like a baby being guided to take his first steps. Here was a man who, a few years prior, presented at a “Society For Disability Studies” conference and had taken a college course (with the assistance of someone trained in Facilitated Communication who was not Anna, it’s important to note). D.J. was not seated in the courtroom for the trial because he was not considered a conscious person. He was presented only as an exhibit, and I mean that literally, not metaphorically.

It was stated a few times during the trial that he has to be watched because he scoots on his butt on the floor to move around. They said he might grab a banana and eat it with the peel still on. When I stand up, my legs are much more contracted than his. It looked to me like he would have more ability to walk than me. So why is he scooting and hanging on to people for mobility? Why hasn’t he been given a mobility device?

The banana thing struck me and made me think of the way I move and eat, too. Because one of my hands is weak and spastic, I’ll often bite through the whole banana so I can peel t
he skin off. That may not be how D.J. does it; I didn’t see him myself. But they painted a picture of him eating banana peels on the floor, which made him seem like an unaware animal, instead of someone who has found a unique way to adapt to his disability.

There was a similar tone when they talked about D.J. wearing Pampers. Lots of people wear them, not just babies. It has nothing to do with mental capability. Physical stereotypes were used to lead the jury to conclude things about his cognitive state, fanning the flames of ableist disgust at the idea of someone who uses diapers having sex. This disgust also assumes any able-bodied person who is attracted to a disabled person must be a pervert, which is such a limited view.

Excuse the “R” word here, because it’s considered derogatory, but a lot was made of the fact that DJ was evaluated as mild to moderately mentally retarded. Well, guess what? In my school years, I was identified as “mildly mentally retarded” on my Individual Education Plan (IEP). This happened because, like D.J., I am cognitively impaired because of my cerebral palsy and I move slowly. I have other cognitive impairments, too. For example, I have a hard time reading maps and understanding directions.

Disabled people are often considered burdens and drains on the economy. I think it is important to remember that even though disabled people are very poor statistically speaking, we also create jobs through the services we need. D.J. receives some amount of home care during the week and he gets services at an adult day program. He is not just someone’s burden. He provides employment for people. Yet, he is considered a child devoid of the dignity applied to other employers, to other adults in their thirties. I think that should change.

In their closing remarks, Anna’s lawyers mentioned that D.J. bit through the skin on one hand, so hard he had to go to the hospital, something he had never done before. And he supposedly bangs his head against stuff now. I understand that Facilitated Communication is controversial, but it seems fair to at least consider the possibility that these actions are an expression of frustration, an attempt to communicate, instead of just random.

Sitting in the courtroom I felt like the only thing separating me from being treated like D.J. is the ability I have to verbalize and write without physical aid. This made me sad for all the people who are being denied the opportunity to live to their full potential and pursue their happiness because of preconceptions and prejudice. Going to the courtroom reminded me that many able-bodied people have a limited appreciation or knowledge of disabled people, despite the incredible progress the disability rights movement has made.