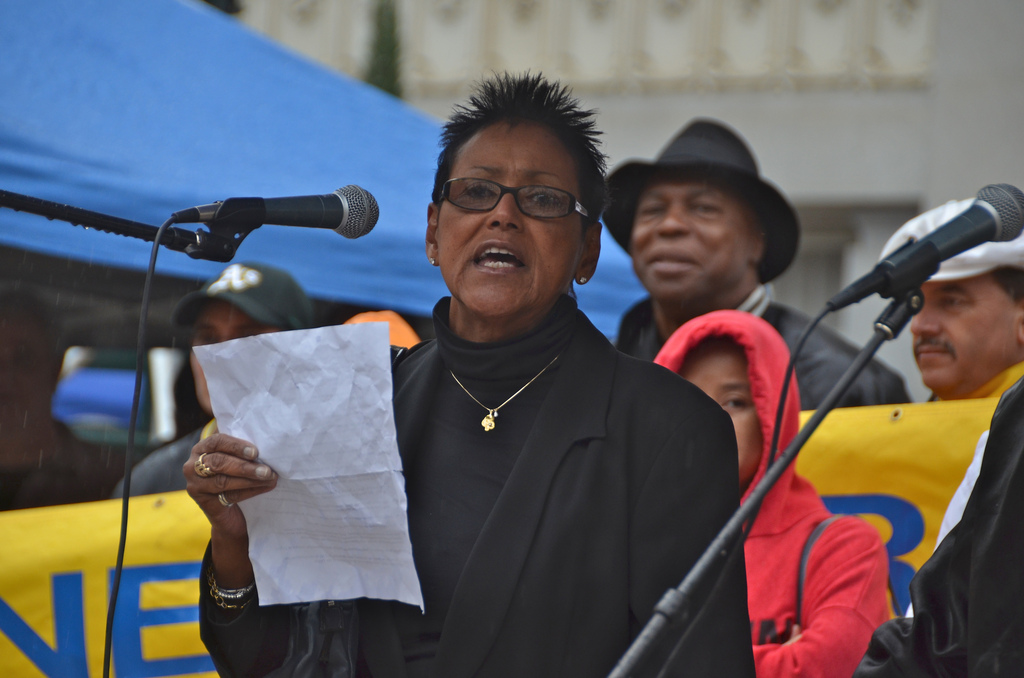 From Jail to Farm to Table

At the corner of Campbell and Seventh Streets in West Oakland, across from a giant post office, sits Oakland and the World Enterprises, Inc. In the past year, the nonprofit’s workers have transformed a long-abandoned lot into an urban farm, where forty raised beds now brim with vegetables and flowers. On a summery October morning, Kelly Carlisle, the project manager and a certified master gardener, gave me a tour, pointing out tomatoes, peppers, kale, chard, and squash. Toward the rear of the property, gerbera daisies, lavender, marigolds, and massive hot-pink roses were in glorious full bloom. As we strolled, Carlisle kept referring to what she calls “the magic of growing”—the way dirt and sun and seed become a living thing, a plant to tend and, one day, eat.

With the exception of Carlisle, everyone who farms here has spent time behind bars. Ten people are each being paid twenty dollars an hour for their part-time work, and they’re also buying into the business with sweat equity. The produce is sold to a variety of local restaurants and to the local school district. Elaine Brown, the project’s founder, has far greater ambitions, though. The farm is the first piece of what she hopes will eventually be a thriving network of businesses that are coöperatively owned and run by formerly incarcerated and, as the project’s Web site puts it, “effectively unemployable” individuals. Her long-term plan includes a grocery store, restaurant, fitness center, and tech-design firm, all nestled under five stories of affordable housing. Some coöperatives across the country hire former inmates, but this vision is unique. If successful, it will be a beacon of what local activists sometimes call “development without displacement,” an implicit rebuke to the tech-driven gentrification that is currently remaking the Bay Area.

There can be monotony to gardening—weed, water, repeat—but everyone working that morning clearly felt the spell that Carlisle had described. The farmers range in age from their twenties to their fifties. Tyan Bowens, a forty-nine-year-old man who had been with the farm since the abandoned lot was just beginning to be tamed, told me that he had spent four months prison. Standing by a row of collards, he said that, even though the work was only part time, it was making it possible for him to provide for his young daughter. “I learned the hard way that prison wasn’t for me,” he said. The farm, he added, “demonstrates that even formerly incarcerated people who have made mistakes and bad choices shouldn’t have that hanging over their heads forever.”

The lot’s location has a deeper symbolism, linking the coöperative’s past and present. During a traffic stop here, before dawn on October 28, 1967, Huey P. Newton, the co-founder of the Black Panther Party, got into a confrontation with a police officer that became violent. He was convicted of voluntary manslaughter, resulting in the Free Huey movement that made the Black Panthers internationally renowned. (The conviction was eventually overturned on appeal.) Following a stormy affair with Newton, Brown led the party from 1974 to 1977, while Newton was self-exiled in Cuba after being charged with murder in a separate case that was dismissed in 1979.

Brown and I met over dinner at Picán, an upscale soul-food restaurant in Oakland’s bustling downtown, and one of a handful of local establishments that purchases the farm’s produce. Now seventy-two, she is petite, with short, spiky hair; she wore a black jacket over a white button-down with a dramatic flared collar. After her time with the Panthers, which included two runs for political office in Oakland, she spent more than a decade living in Georgia, where she dedicated herself to the cause of juvenile justice. In 2003, she published “The Condemnation of Little B,” which explores the myth of black-male criminality through the trial of a thirteen-year-old boy who was accused of murder and sentenced to life.

The word “coöperative” tends to conjure quaint health-food stores, anarchist bicycle shops, and other bastions for white liberals, but as the scholar Jessica Gordon Nembhard documents in her 2014 book, “Collective Courage,” black coöperative economic development has a rich history, encompassing the Colored Farmers’ National Alliance and Cooperative Union, which had more than a million members in the late nineteenth century; W. E. B. Du Bois’s 1907 study, “Economic Co-operation Among Negro Americans”; and the consumer coöperatives operated and promoted by the Ladies Auxiliary of the Brotherhood of Sleeping Car Porters, which organized in the late nineteen-thirties. In “A Taste of Power,” an autobiography she published in 1992, Brown talks about wanting to launch a variety of coöperative businesses as part of the Black Panther program back in the early nineteen-seventies. But she didn’t have the idea for Oakland and the World Enterprises until September, 2013, when Keith Carson, an Alameda County Supervisor, asked her for advice about the twin problems of prisoner reëntry and recidivism.

At the time, California was about to pass a measure that would delay the point at which state agencies can ask prospective employees about their criminal histories; President Obama signed an executive action doing the same for federal agencies in early November. Brown later told me that she doesn’t believe this approach, which has been advocated, most prominently, by the Ban the Box campaign, makes much of a difference, because formerly incarcerated people have telltale gaps in their employment history and employers can still run criminal background checks. “It’s really ineffective and kind of irrelevant. That’s why he can support it in his last days of office,” she said of Obama.

She does, though, agree with Ban the Box’s essential critique: that, regardless of whether someone is a sex offender or a petty thief, once they have a record their application goes to the bottom of the proverbial heap. Traditional job-training programs, then, are of limited utility. So Brown proposed a more radical approach to Carson, telling him that the most secure solution for formerly incarcerated people would be for them to own their own businesses; then they wouldn’t have to ask anyone for a job. “Once you own your own business, it’s a wrap,” she said.

Carson hired Brown to put the proposal into action. She had some experience to draw on: the Panthers had operated free breakfast programs, health services, pest control and plumbing services, newspapers, a popular night club, and, during Brown’s tenure as leader, an innovative elementary school. She scouted for properties, just as she had once scouted for places to house free medical clinics. By late October, 2014, she was breaking ground on the farm, with then Mayor Jean Quan and other city officials in attendance.

With ribs, greens, and a martini before her, Brown wove the coöperative’s aims into a larger intellectual perspective. Most activism today, she said, was missing “a correct analysis”—an understanding of how capitalist dynamics shape our current condition. The guiding motto of our government, Brown quipped, is, “We care about you, but we won’t care for you.” If a person is poor or in prison, it is unfortunate but ultimately their fault, this ideology insists, and the state doesn’t owe them anything; it feigns empathy while willfully ignoring the broader c
ircumstances that keep people impoverished and often cause individuals to turn to crime in the first place. And it is these circumstances that Brown wants to see radically changed. Yet she was aware of how hard that process would be. “There is no way to piecemeal, fix up, or reform any of these issues we all like to look at in isolation,” she said. She saw Oakland and the World Enterprises as a humble project in service of her transformative goals: “I’m just putting my little businesses together.”

The bill had arrived, but Brown wanted to share one last tale before we left. When the farm signed its agreement with Picán, she wanted to celebrate with a photo opportunity. “About four of the workers came up here and they said they had never seen a place like this, ever,” Brown recalled, gesturing across the room. “They had never seen a place this beautiful in their lives.”

Co-published with The New Yorker.