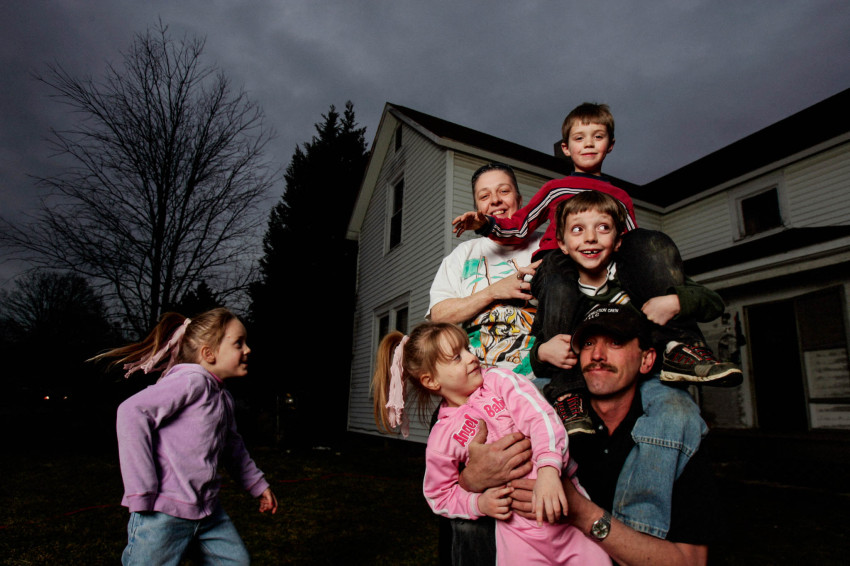 2006 - A portrait of the Sellers family in front of their home in Chauncey, Ohio. All photos by Matt Eich
Families

Lessons on Life, Love, and Connectedness

All photographs by Matt Eich

One day, while wandering a small village in southeastern Ohio, I stumbled on a rugged-looking man and his two sons cleaning up muddy dirt bikes at a car wash. Most of the folks I had encountered up until this point were incredibly distrustful of outsiders, so I was immediately drawn in by his open demeanor. He seemed just as curious about me as I was about him.

It was 2006. The recession that would have a huge impact on the lives of many in the region had not yet hit. I was 19 years old, a sophomore photojournalism major at Ohio University, and beginning to fall in love with the woman who would become my wife. Life seemed full of possibility. 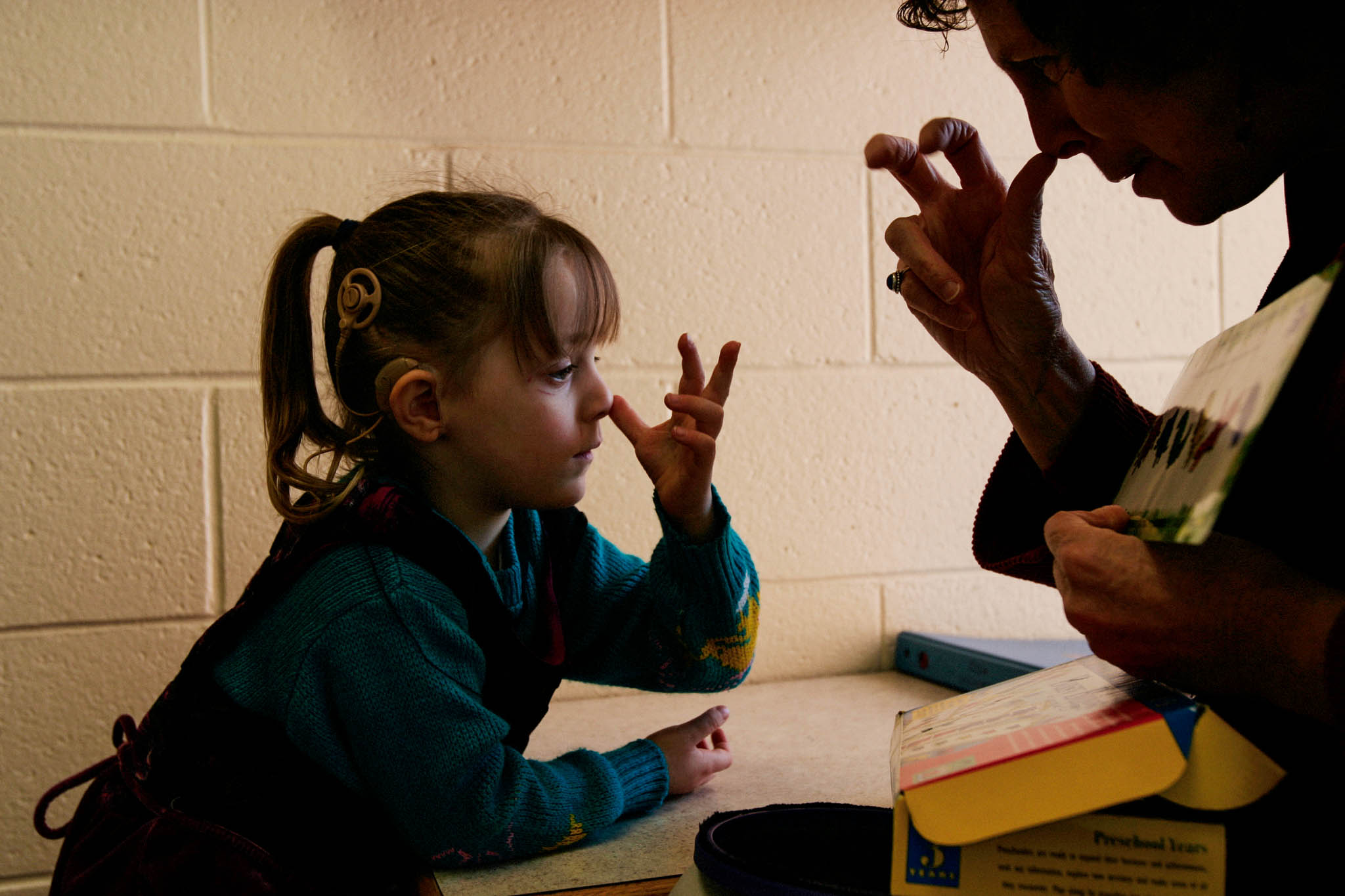 School therapist Pattie O’Brien makes the sign for “bug” with Lacey Sellers during one-on-one tutoring in 2006. O’Brien started working with the twins after they received their cochlear implants, helping to teach them sign language and develop their hearing comprehension. 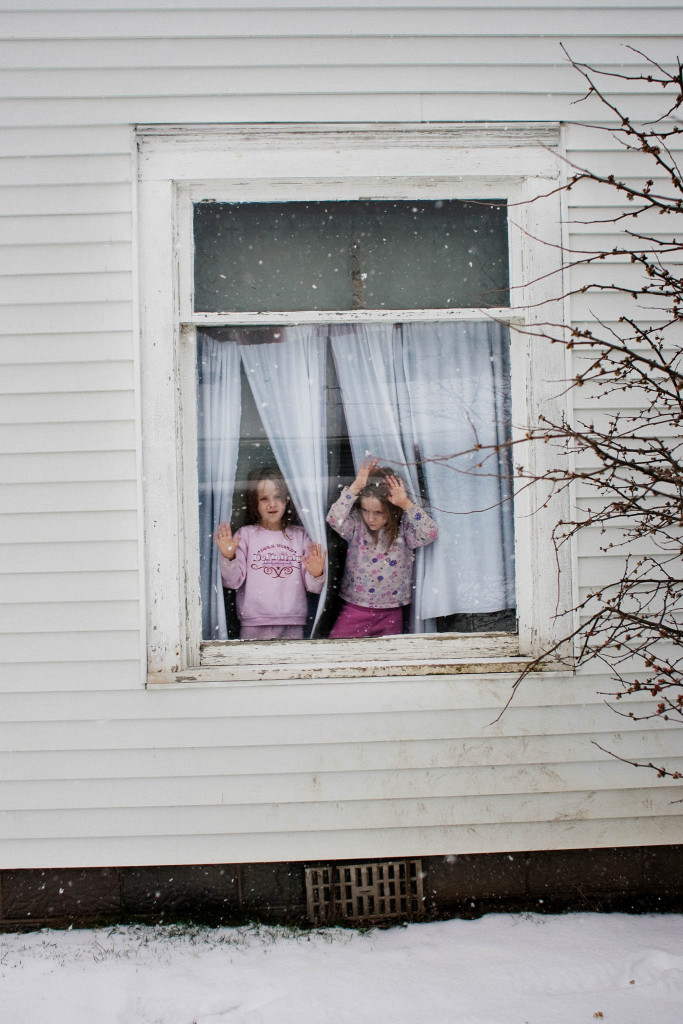 Kacey and Lacey Sellers, five, stand in the window of their family’s home in Chauncey, Ohio, in 2007. The identical twins were both born deaf.

I had to make a photo story for one of my classes, and I was struggling to meet people and explain what I was doing. I wanted to be making pictures that were intimate, from the perspective of an insider, but I was an outsider—and I didn’t have a clue how to get access. This is still one of the most difficult parts of photography for me.

We struck up a conversation and Jessie Sellers, Sr., invited me to hop in the back of his truck with his sons, Jessie Jr., six, and William, five. It didn’t occur to me that things could go anything but well. I quickly accepted the invitation, jumped in, and off we went. 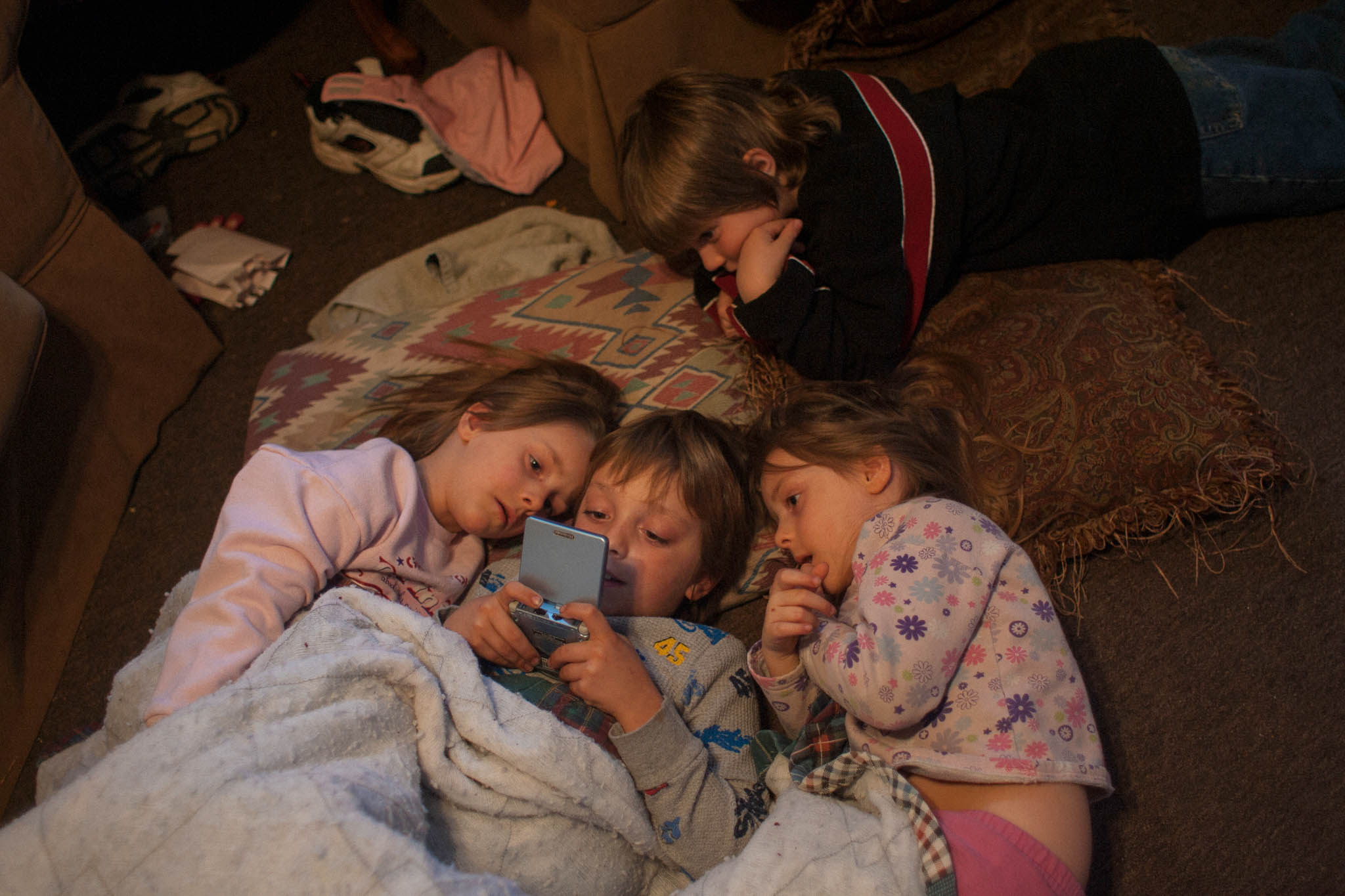 Kacey and Lacey cuddle on the living room floor next to their brother Jesse Jr. as he plays video games in their Chauncey, Ohio, home in 2007. Their brother William looks on. 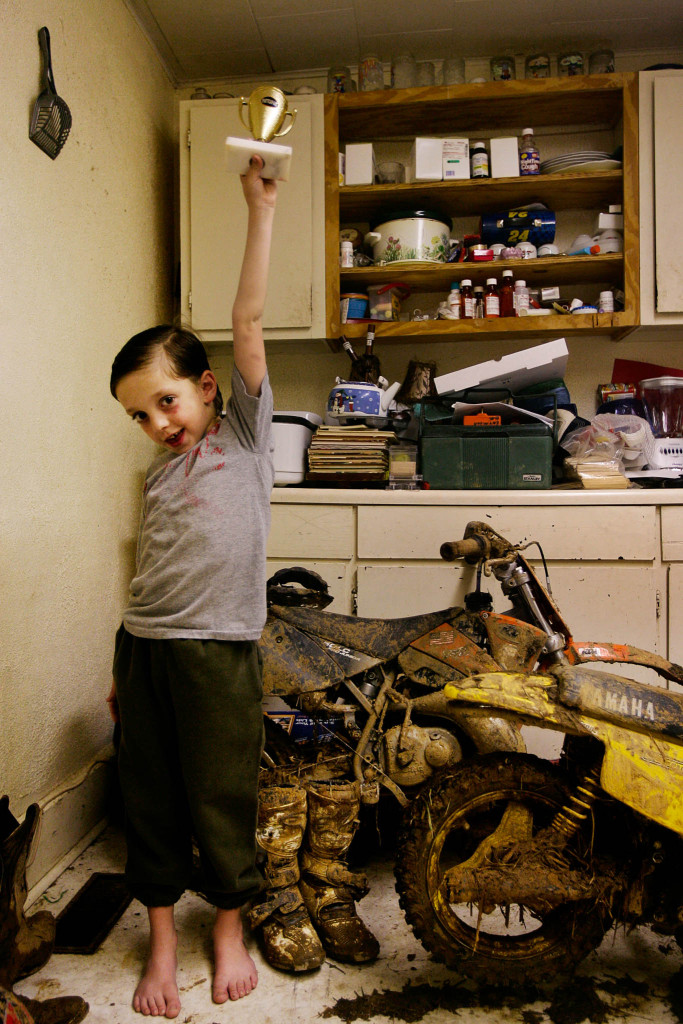 In this 2006 photo, Jessie Sellers, Jr., six, his hair still wet from a bath, stands in his kitchen holding a trophy he won during his first dirt bike competition. “It was so cold, and he wanted to quit,” Jessie Sr. said, “but I told him we needed those points and he had to finish. But he won something his first race!”

Upon our arrival at their weathered two-story house in Chauncey, Jessie introduced me to his wife, Tracy, and their identical twins Kacey and Lacey, who were four years old at the time. The twins were born deaf, and I was immediately fascinated by these two little people who were so full of life and mischief but were also cut off from the rest of the world because of their disability. I asked if I could come back to spend more time with them. Jessie and Tracy graciously agreed. 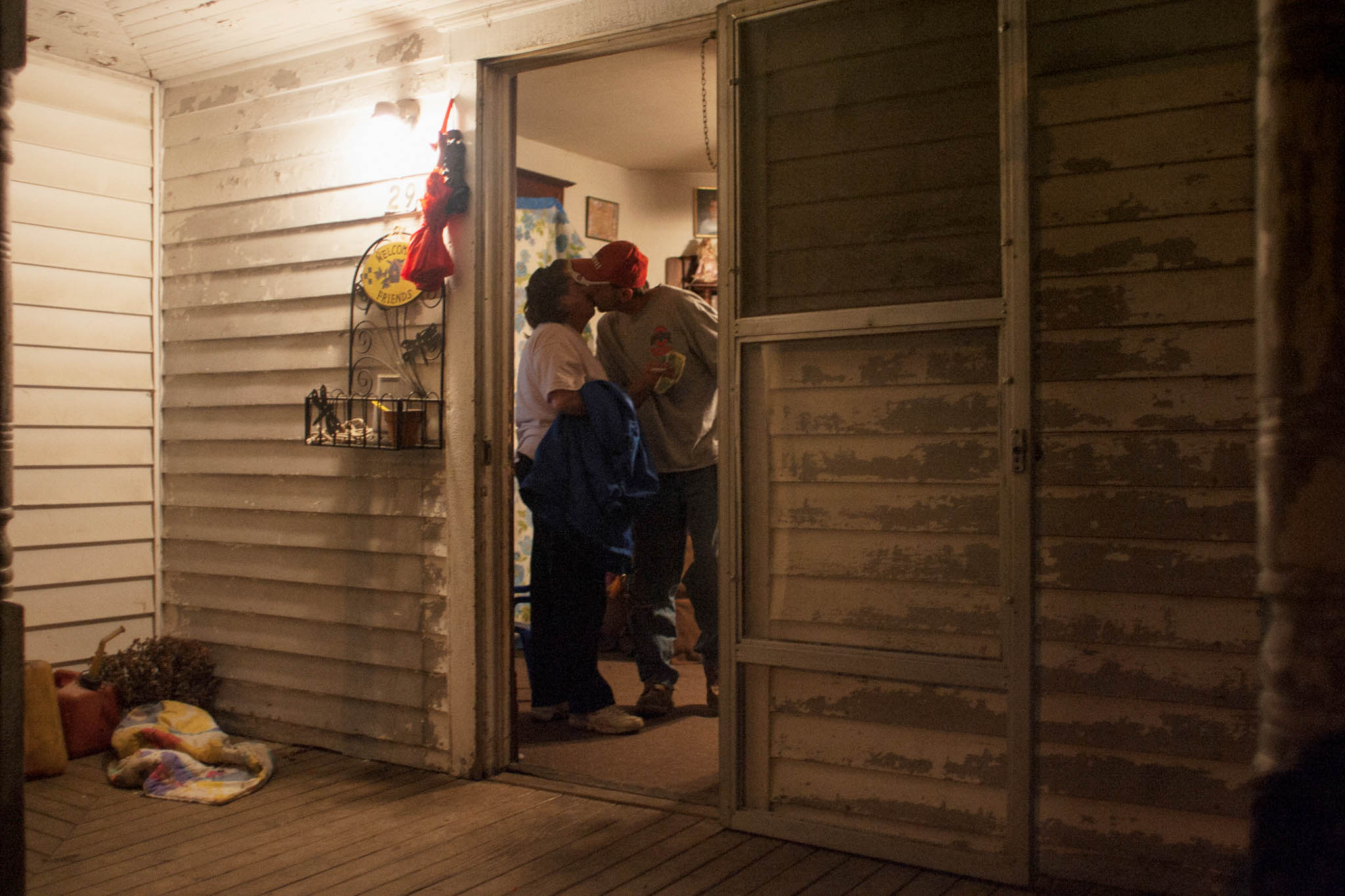 Jessie Sr. and Tracy share a kiss in the doorway of their home in Chauncey, Ohio, in 2007.

For the next few months I photographed them every chance I got. Most days, I would finish classes and drive to the Sellers’ home, where I could be present for whatever was going on. It could be dinner or bedtime, but most often I would find myself just hanging out with them, talking and listening to Jessie’s wild stories while we smoked cigarettes.

Sometimes I would skip a class so I could be there when something important was planned. I photographed them getting the kids ready in the morning, the kids at school and sporting events, and the parents struggling to keep four active children alive and cared for in a place where nothing much happens. 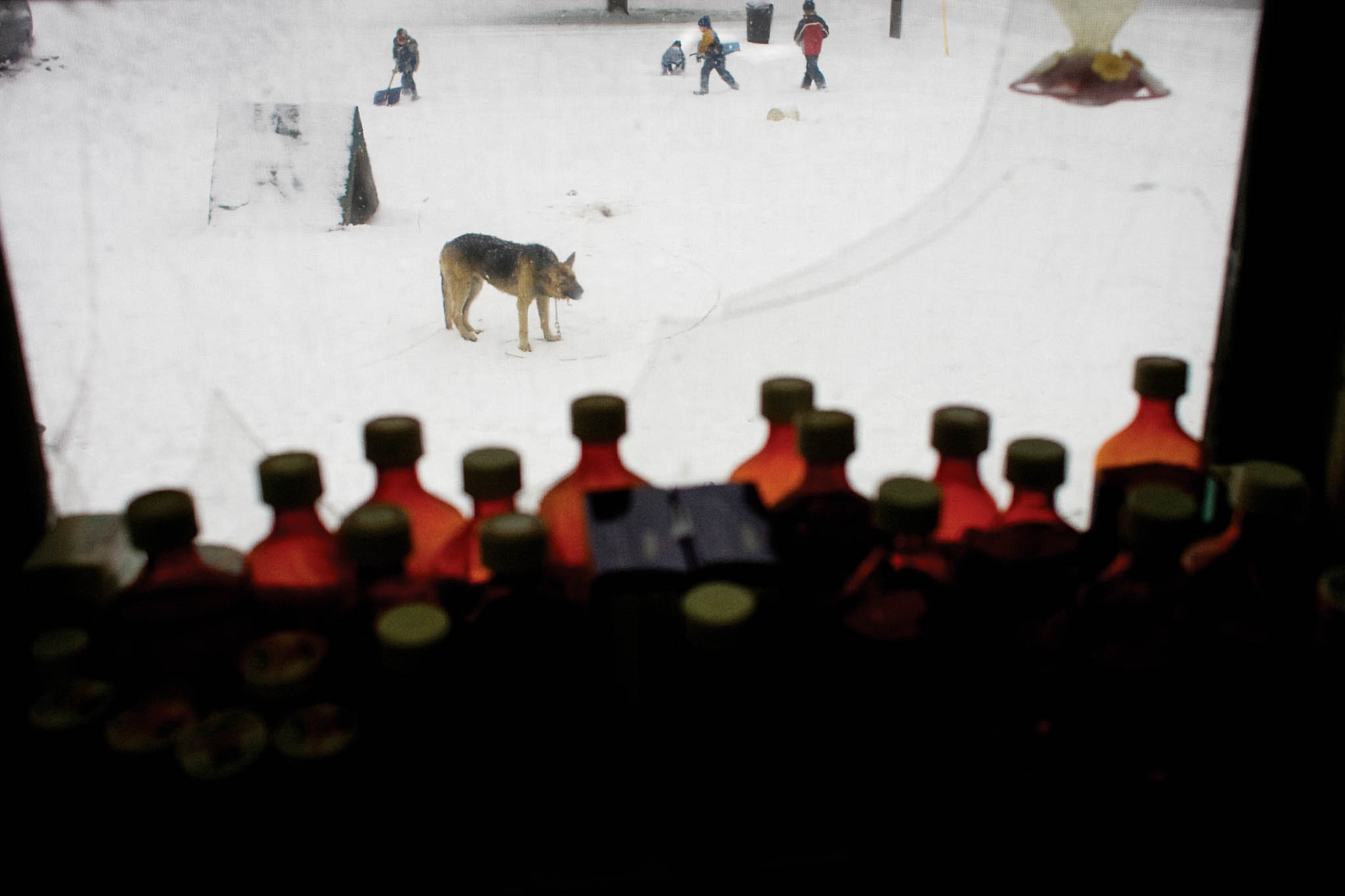 Viewed through a collection of medicine bottles lining the Sellers’ window, Hercules, the family dog, crouches to watch the children playing in the snow in 2007. The Sellers family struggles with an assortment of health problems. 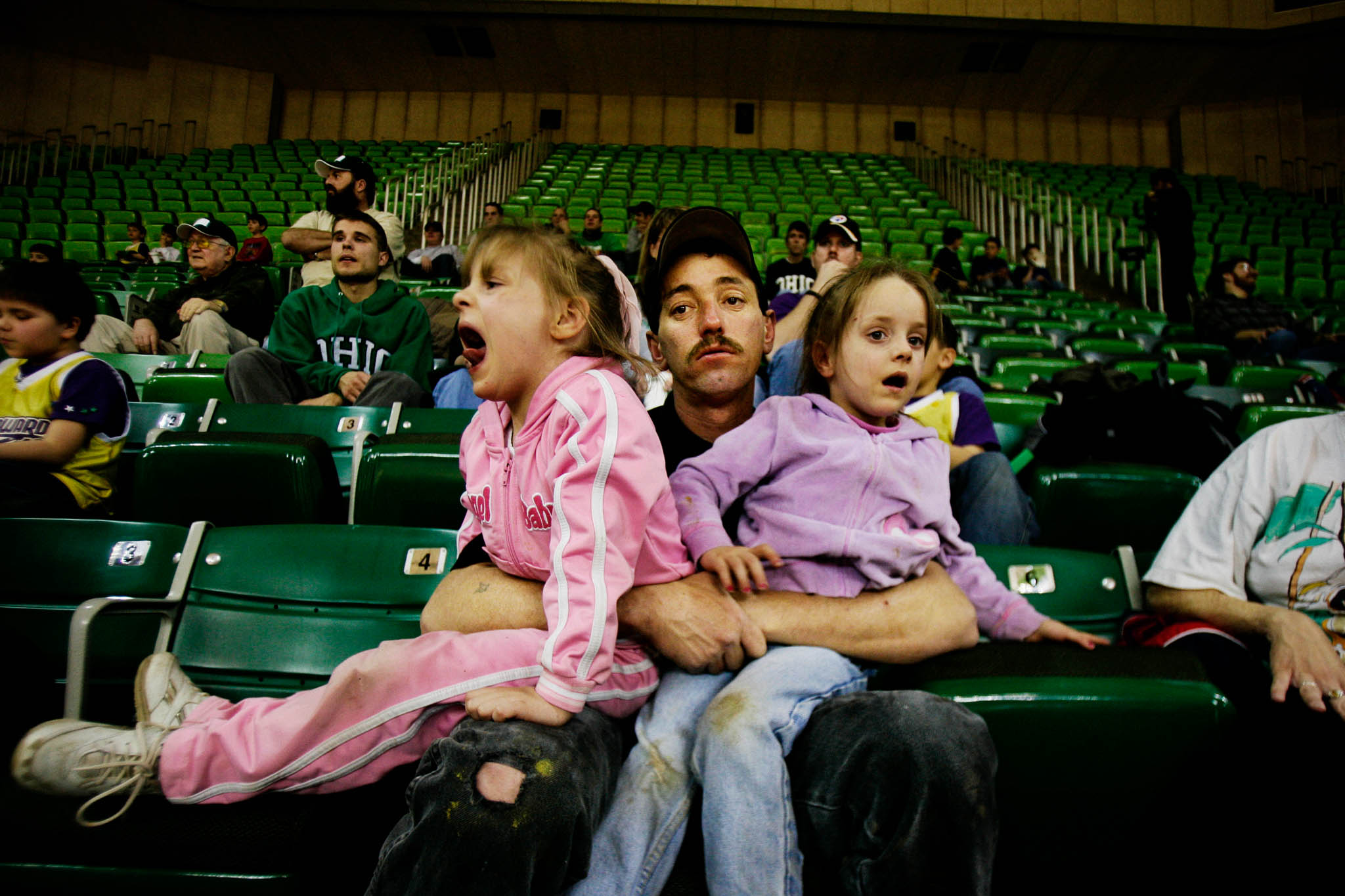 Kacey and Lacey struggle and fuss while their father holds them. Exhausted after enduring two hours of temper tantrums and escape attempts at an Ohio University basketball game, Jessie still wrestles with his daughters’ disability. “I didn’t know how to accept it” he says. “To me, it just hit me real hard. I blame everything on God. I probably shouldn’t. But they talk about how wonderful he is, and to me that’s not a very wonderful person to put me through that.”

After my class assignment concluded I kept finding my way back to the Sellers to see how they were doing. Jessie started introducing me to other people in the community, and my work about the region deepened.

A year later, when I got married, the twins were the flower girls at our wedding. Now, ten years later, they’re 14 years old. They live in a suburban neighborhood in Columbus, Ohio, and attend a school for the deaf. Their brothers are 15 and 16. Because of my family life and work, there have been long gaps when I’ve been unable to visit. Sometimes I’m gone for a few months or a few years, but whenever I return, the family welcomes me back into their life with ease. 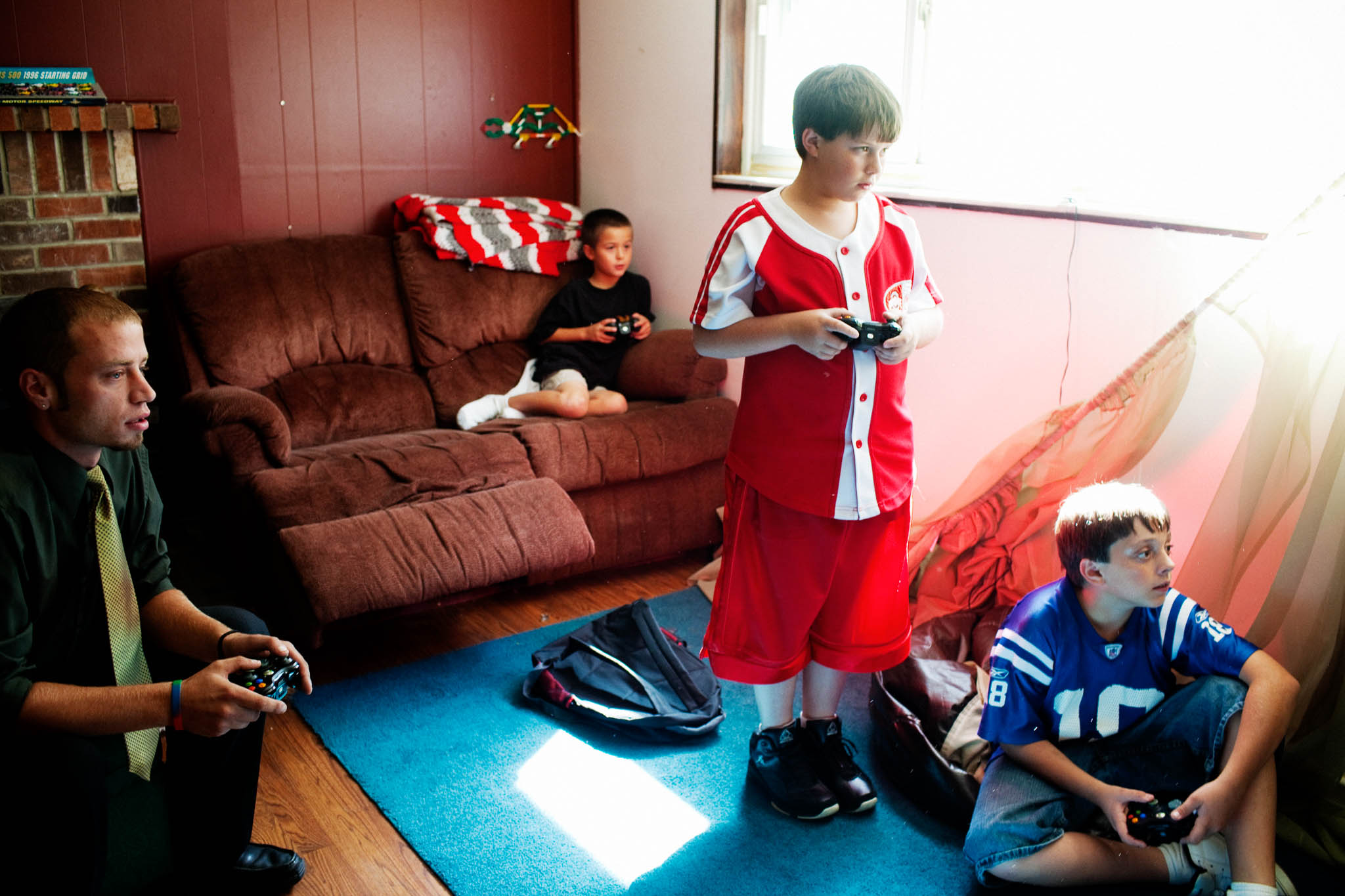 Left to right: Josh Rickman and Kyle Murray play video games with William, 10, and Jessie Sellers, Jr., 11, in Columbus, Ohio, in 2010. It was Josh’s first and only day selling Kirby vacuum cleaners. He came to practice his sales pitch but ended up playing video games with the boys. 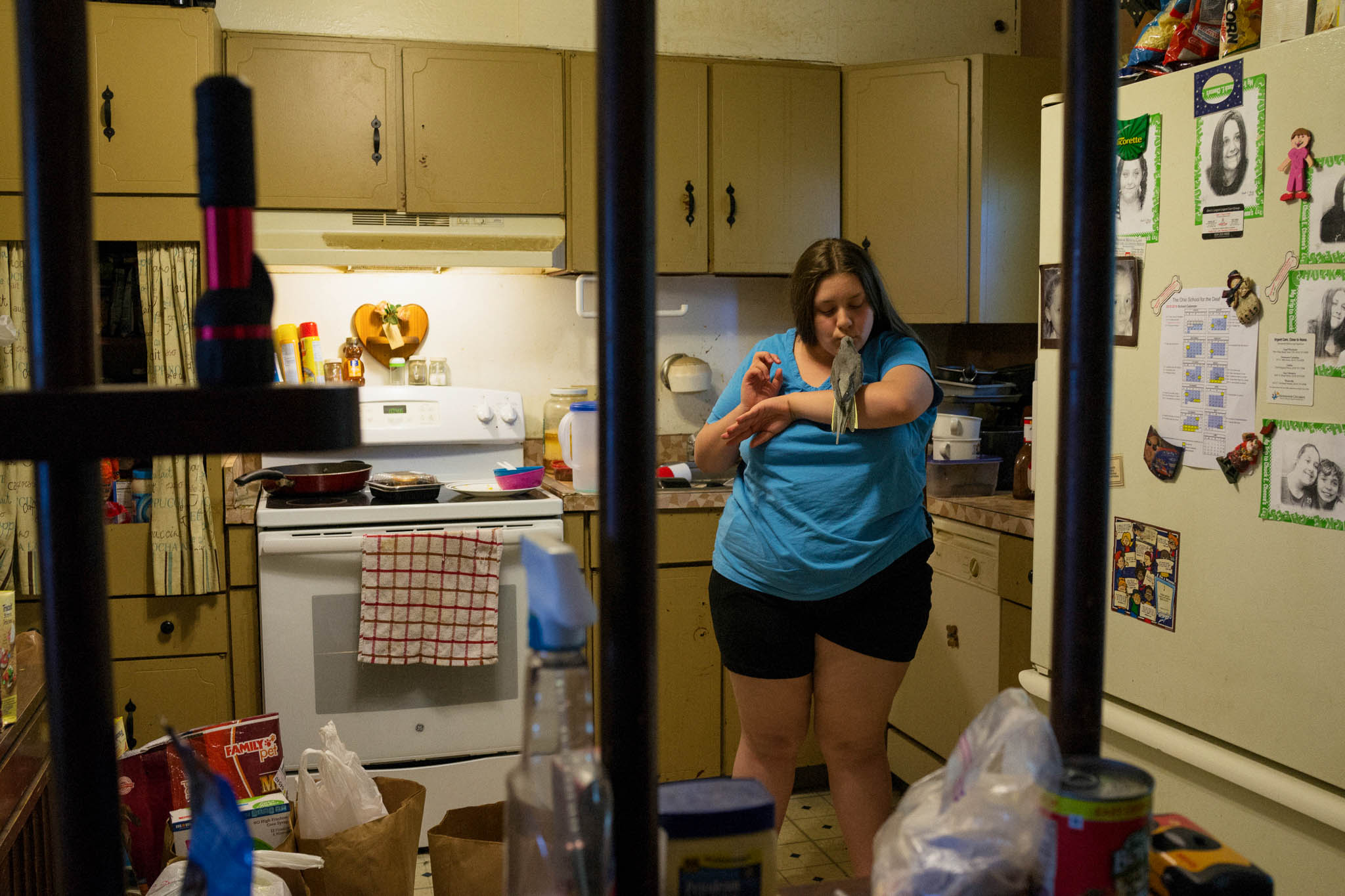 Lacey kisses the family’s pet parrot in Columbus, Ohio, in 2015.

I’m still not quite sure why they trust me, or what they gain from my presence, but I am incredibly grateful to this family for the incredible experiences, friendship, and photographs. Each time I’m with them, I learn about vulnerability, connectedness, love, and what it means to try your hardest as a parent.

In 2016, Matt Eich‘s “Carry Me Ohio” project will be released as a book by Sturm and Drang. These photographs were made possible in part by support from the Alexia Foundation, the Getty Images Grant for Editorial Photography, and the Economic Hardship Reporting Project.