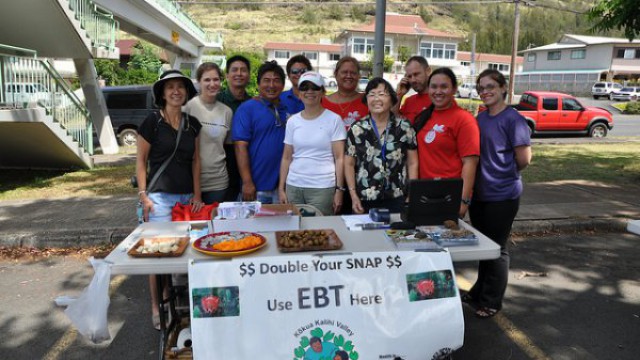 The New War on Food Stamps

Conservatives are blocking access to crucial SNAP benefits with work requirements and limits on what items people can buy.

My daughter’s eyes still show the effects of all the years we went hungry. When she can’t finish a meal, she looks at me fearfully, worried I’ll get upset because she didn’t eat everything on her plate. For most of her life, until very recently, I didn’t have enough money to buy ample, good-quality food for her. So I gravitated to what I knew for certain she would eat—things like Ritz crackers, plain pancakes, mac and cheese. I felt a biological urge to nourish my kid as best I could, even though I knew that what I could afford to buy wasn’t healthy enough.

Our worst period started in late 2013, when a temporary nationwide increase in food-stamp benefits, implemented as part of the 2009 Recovery Act, came to an end. At the same time, now that my daughter was over the age of six, I was required to work 20 hours a week in order to receive food benefits. I was in my last year of college, carrying a heavy course load, and couldn’t handle more than 10 to 15 hours a week cleaning houses. My daughter still received benefits, but I did not. Our monthly food budget suddenly dropped to around $200.

Over the past several years, the country has seen a new wave of attacks on poor people’s right to food assistance. Lawmakers across the U.S. have added more work requirements, laying a heavy burden on young people trying to attend college and parents trying to juggle jobs and childcare. In New Mexico, anyone with children above the age of six is required to do 80 hours of work-related activities a month to qualify for assistance, and the age range of the work requirement has been expanded to include everyone between 16 and 60.

Some states have imposed 90-day limits on food stamps for unemployed people without young children. This was put in place under the 1996 welfare-reform law, but federal regulations allowed states to waive the requirement in times of high unemployment. Now that unemployment rates are dropping, the law stipulates that unemployed people without children can only receive food stamps for three months during a three-year period. Since January of this year, 23 states have implemented the rule, leaving as many as 1 million of the country’s poorest people without the help they need to buy food.

Politicians are now going even further, proposing limits on what people can buy with food stamps. Federal law doesn’t grant states the ability to restrict food-stamp purchases this way, but that hasn’t stopped legislators from trying. Last year, Missouri proposed putting energy drinks, cookies, seafood, and steaks on a list of items food-stamp recipients can’t buy. Although that bill went nowhere, Wisconsin legislators have approved a bill that requires food-stamp recipients to use at least two-thirds of their monthly allotment on nutritional foods such as meat, fruit and vegetables. In New York, state Republican Senator Patty Ritchie recently introduced a bill that would limit the food people can purchase through the Supplemental Nutrition Assistance Program. “The purpose of SNAP is to promote good nutrition,” the bill reads, “but current rules allow the purchase of junk food and luxury items like high-end steaks and lobster.”

These efforts are based on patronizing misunderstandings about poor people. At least 45 million people receive food stamps in the U.S. every month, 16 million of them children. Contrary to the myth that food stamps are ineffective and foster a culture of dependency, a White House report found that SNAP benefits lifted 4.7 million people out of poverty in 2014. Meanwhile, rather than incentivizing better food choices, cuts to food stamps only further hurt people living in food deserts, where highly processed food from convenience stores is often the sole option. And far from being gluttonous, SNAP recipients are extremely frugal with their funds, since the benefits are not enough to sustain a family through an entire month. The White House report found that families who receive SNAP actually consume 10 to 25 percent fewer calories over the course of a month as they use up their benefits. The stereotype of food-stamp recipients buying “fancy” items such as seafood or steak isn’t rooted in reality. Instead, it stems from the false right-wing narrative, popularized by Ronald Reagan in the 1970s, of the welfare queen, a term that became synonymous with single, poor, often African-American women.

Still, it’s not enough just to dispel these myths. We need to stand up to the idea that food-stamp recipients shouldn’t be allowed to buy certain kinds of food. The junk foods that the New York bill lists include cookies and cake. But why would anyone deny a child a cookie, even if her family is on food stamps? When I was working my way through college, buying my daughter treats like cupcakes or candy was just as urgent a need as buying oatmeal or fresh produce. These supposed indulgences were our birthday cakes, our Easter chocolate, our stocking stuffers—the sorts of special treats that bring a smile to a child’s face. Yet I felt nothing but shame when I bought them. I’d go late at night, use the self-checkout, and duck my head as I left the store. When my daughter opened her stocking, I could take no pleasure in the delight in her eyes. Instead, there was only the nagging worry that I’d taken advantage of the system, of taxpayers’ money.

Some argue that it’s necessary to forbid certain kinds of food for people on public assistance in order to combat obesity, diabetes and other health issues. Although it is true that many poor people face health problems due to poor diets, this is an ingrained social problem that won’t be solved by draconian food-stamp rules. The fact is that low-quality food is simply easier to afford, and bad eating habits can be the result of a lifetime of socioeconomic forces. A recent study published by Psychological Science showed that children in poor households overeat by default because they haven’t learned to listen to their bodies’ signals. These children have lived a life of food insecurity; when there is food to
eat, they know, you have to eat it until it’s gone. After all, you don’t know when it will be there again.

Over the last couple of years, I’ve watched celebrities and producers of documentaries attempt to eat on the $4 to $5 daily allotment of the food-stamp budget. However well-intended, these attempts can never fully illustrate what it’s like to have only $35 a week for food. These celebrities still have a cushion; they can always opt out if they want. Their experiences show how difficult it is to survive on food stamps, but they also underscore the inherent ridiculousness of such efforts.

Work requirements for 60-year-olds, or food-stamp bills that gripe about lobster and steak are just as ridiculous. These laws have nothing to do with helping people and everything to do with further humiliating the poor. Trust me when I say no one chooses this route, yet millions of people in our communities still find themselves in circumstances that force them to go hungry. So let them eat cake. Let them eat whatever the hell they want.

Stephanie Land‘s work has been featured on Vox, DAME, Narrative.ly, Manifest Station, through the Economic Hardship Reporting Project, and as a writing fellow with the Center for Community Change. Follow her @stepville or read more at stepville.com.