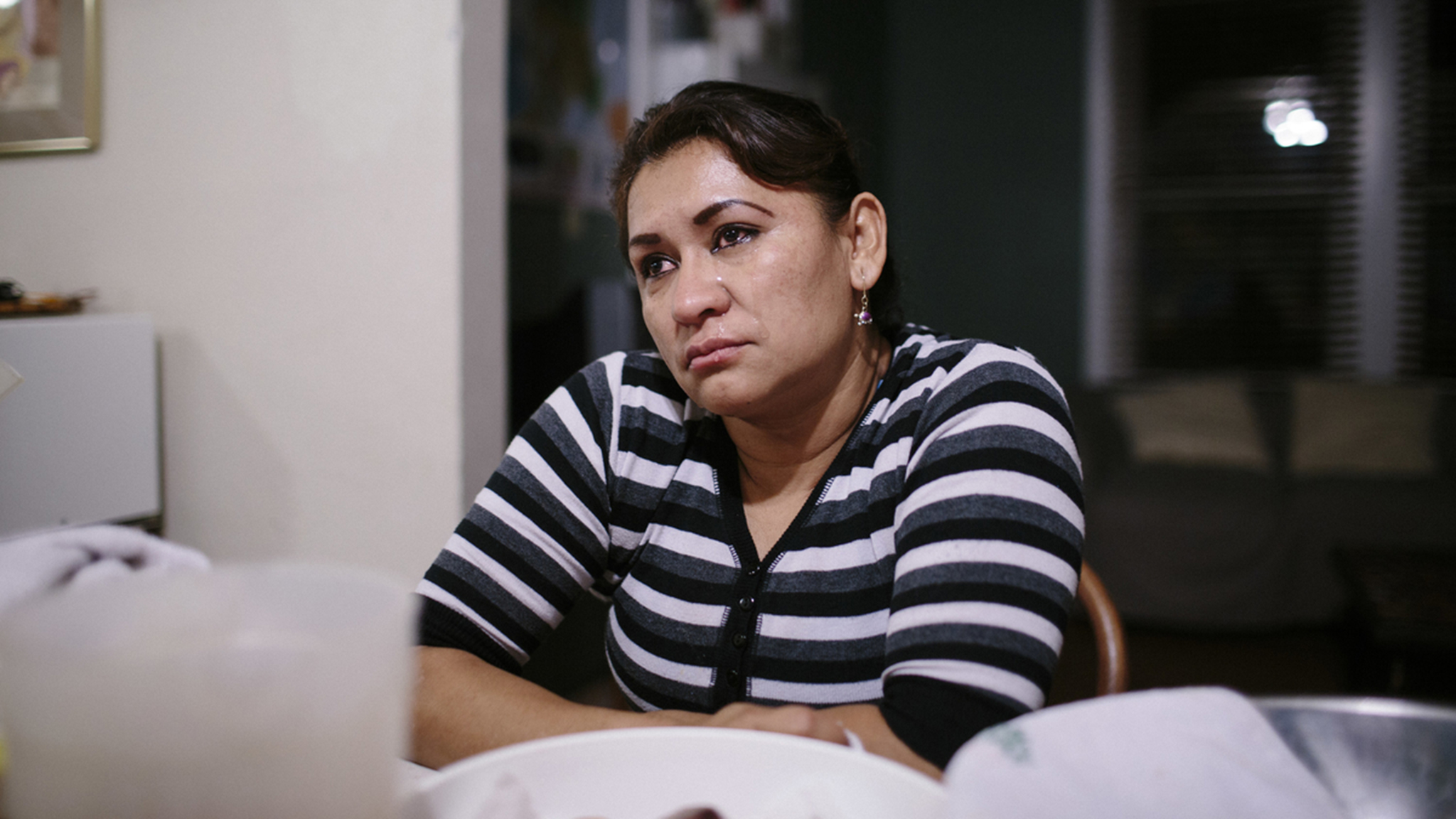 The Next Stop for Detained Immigrant Families

An unassuming building, nestled on a quiet, tree-lined block in San Antonio, Texas, has become a refuge. It’s known as the Mennonite House for its affiliation with the nearby Mennonite Church, and for roughly a year now, it has been the first place thousands of families come to after they are released from the South Texas Family Residential Center, an immigrant detention center located an hour from here in a tiny town called Dilley. The Dilley facility is the country’s largest detention center. It sits about an hour from the border between Texas and Mexico, and holds exclusively women and children. The majority of families detained there are asylum seekers from Central America who crossed over the border from Mexico after fleeing gang violence in their home countries. Some have husbands or partners already living in the U.S., others are fleeing domestic violence or abuse; almost all have made the trip on their own.

Staff from the Dilley facility deposit the families at the San Antonio bus station, a grim depot in a rough part of town. For most of the women and children, it’s their first taste of America. Volunteers, organized by the legal non-profit RAICES (Refugee and Immigrant Center for Education and Legal Services), pick up the families and bring them to the warm and raucous Mennonite House a short drive away. RAICES, which runs the facility, started as a social support group in the mid-1980s for the waves of Central Americans fleeing the civil wars and chaos in the region, and now provides legal support for immigrants in deportation proceedings.

At the Mennonite House, the newly released women and children can enjoy a hot meal or a night’s sleep before moving on to wherever they are headed next, be it Idaho or New York. Most of the women and children have family or friends elsewhere in the country and many leave the detention center with a bus or plane ticket to their final destination; sometimes they have a few days before they are scheduled to leave. The families released from Dilley have not yet been granted the right to stay in the country permanently, but they will have a chance to fight their cases in local immigration courts. There is little RAICES can do on that front. But they help the women and children get where they need to be by assisting with translation, travel coordination and other handholding. It’s a welcome contrast to detention, which detractors refer to as “baby jail,” and about which immigration activists and detainees have complained of inadequate medical care, concerns about adequate child supervision and favoring profit over human rights. 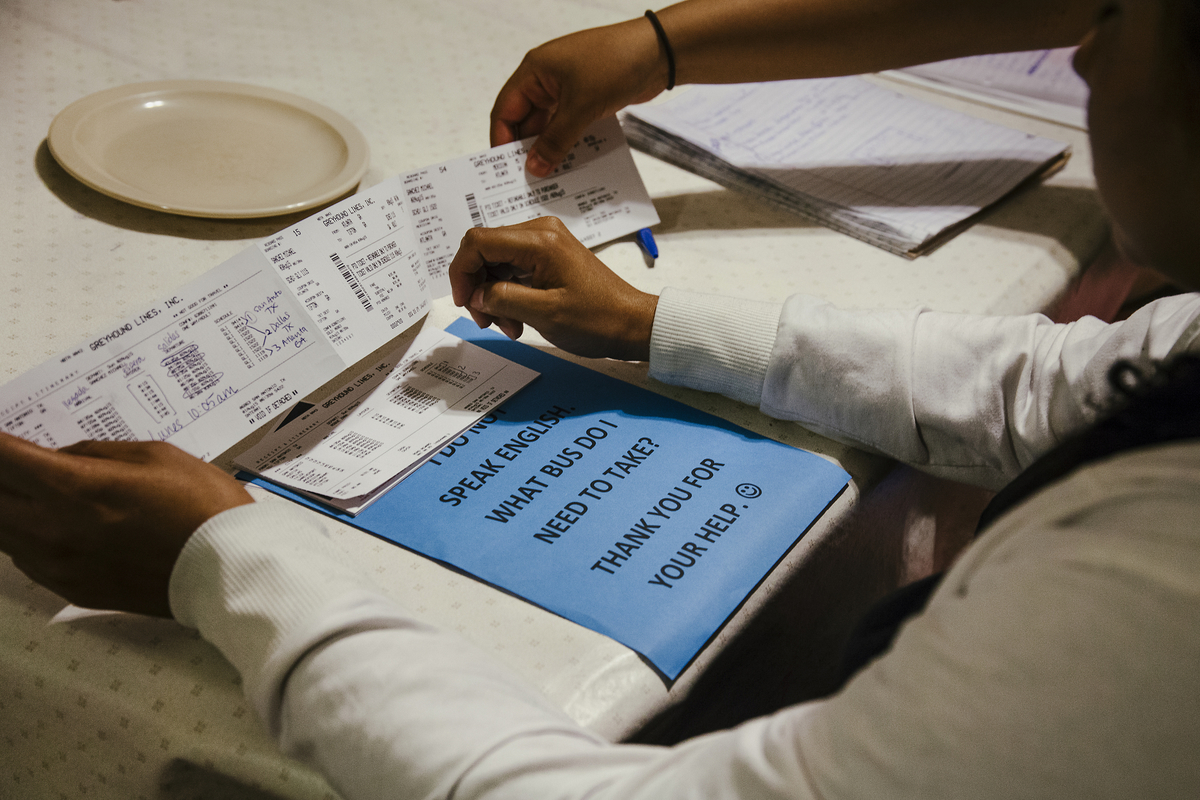 A woman released from the detention center at Dilley holds her bus ticket. Many families come to the Mennonite House for a few hours before departing to a far-flung corner of the country. 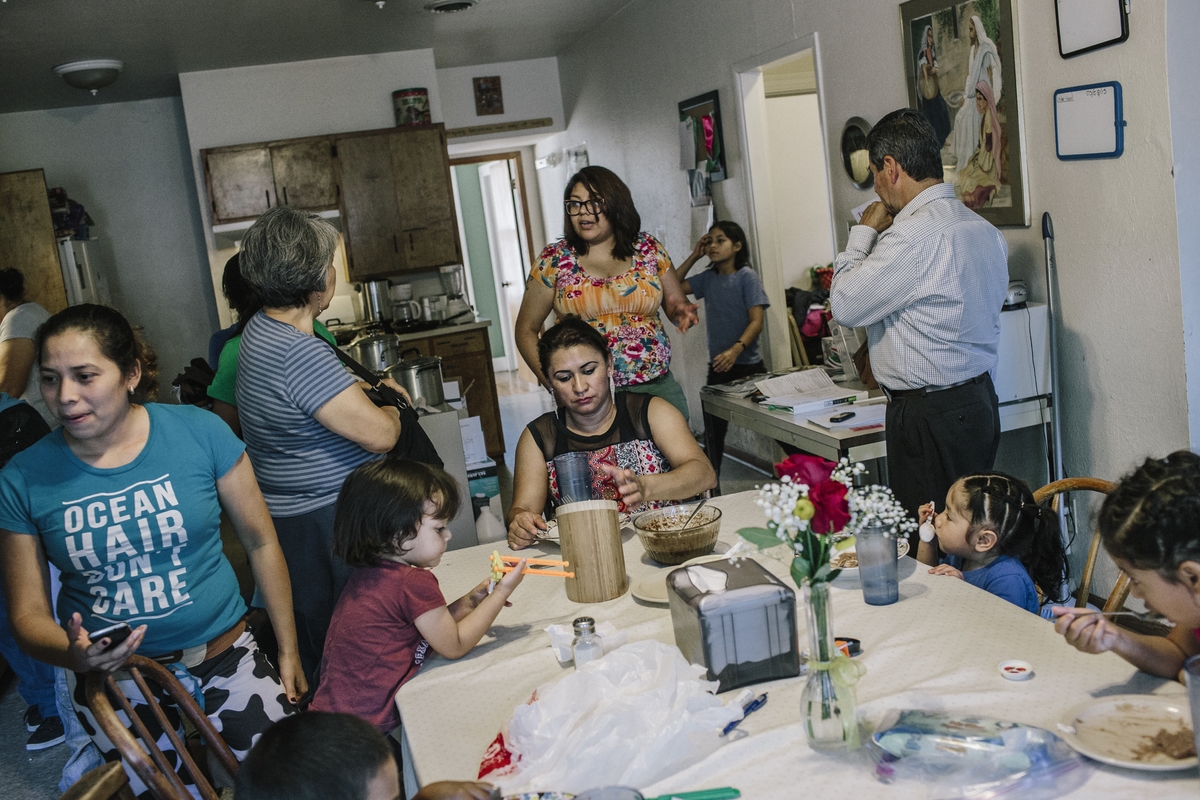 The kitchen at the Mennonite House crowded with volunteers and recently released families. Yanira López Lucas, at the head of the table, fled Guatemala with her family. López Lucas and her three children were detained at Karnes County Residential Center, and now they help oversee the Mennonite House. 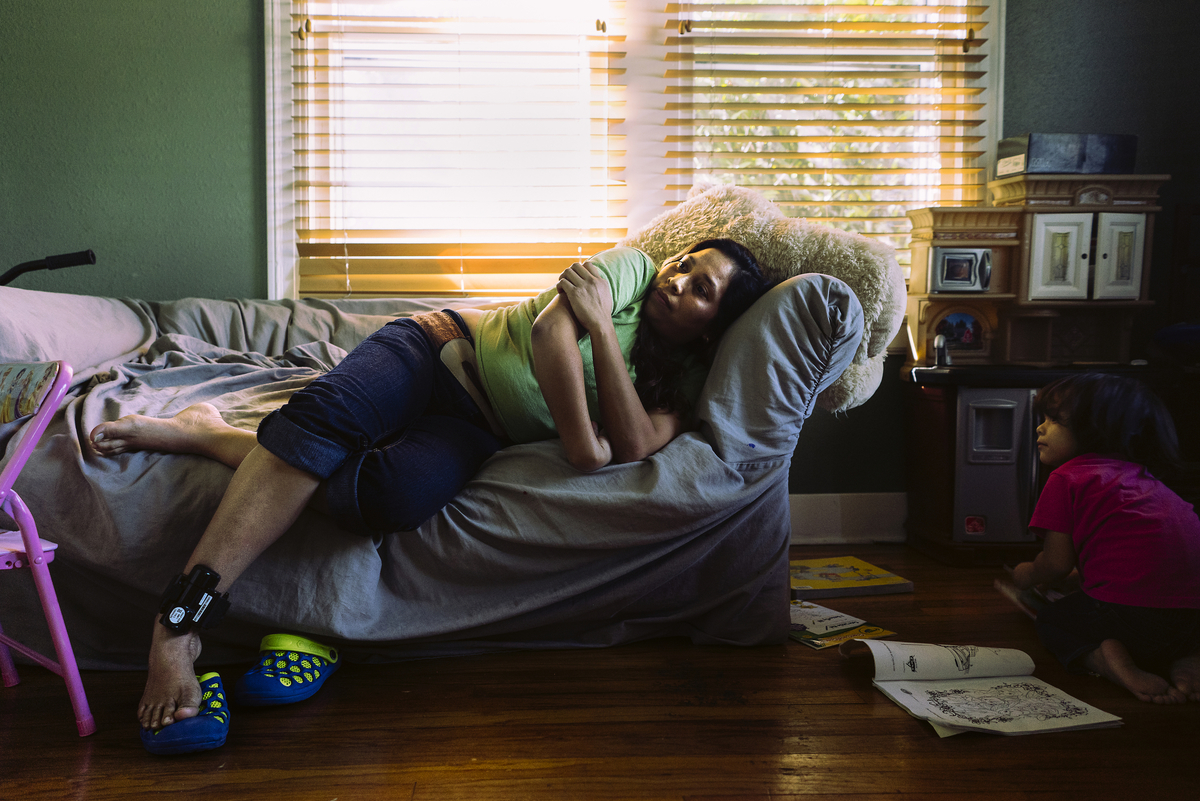 A woman and her daughter rest at the Mennonite House after being released from the detention center in Dilley.

While not all of the families detained at Dilley are legitimate asylum seekers, most have what is called a credible fear of returning to their home countries, which means their cases must be adjudicated in a legal process. Many are represented by a band of pro-bono lawyers organized by CARA, a coalition of immigration and legal groups. Many, though not all, of the women and children at the Mennonite House were granted release from detention because the CARA staff and volunteers worked to prove the families had legitimate claims on asylum. 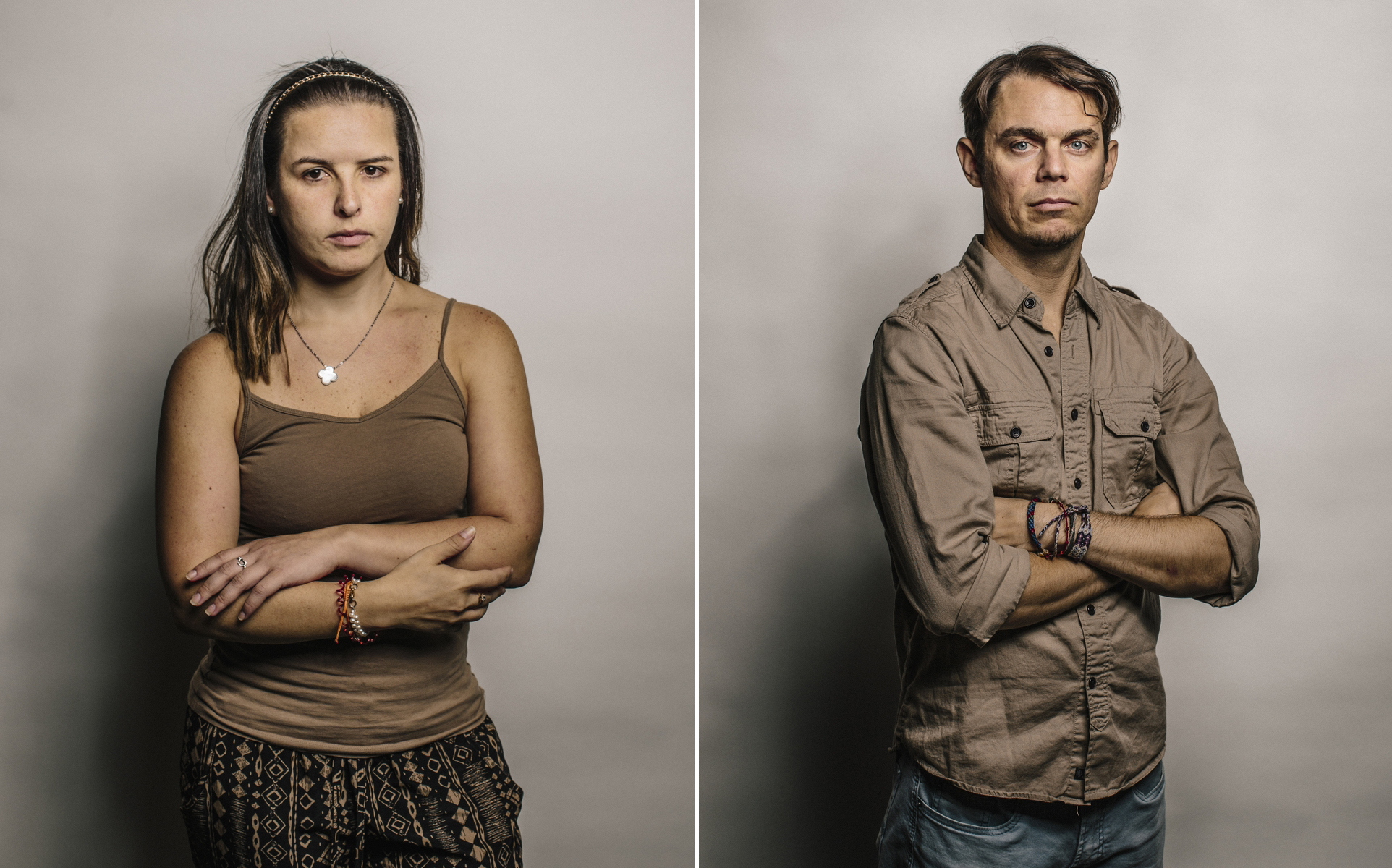 L: Isabel Saavedra was one of two full-time lawyers on the ground in Dilley, though she has since moved to a new position in Washington, D.C. Currently there are three full-time lawyers working to secure families’ releases. Each week, volunteers come from around the country to assist, but the workload is still unsustainable. R: Ian Philabaum is the project lead for the team on the ground. Among other things, he helps run trainings for the volunteers. 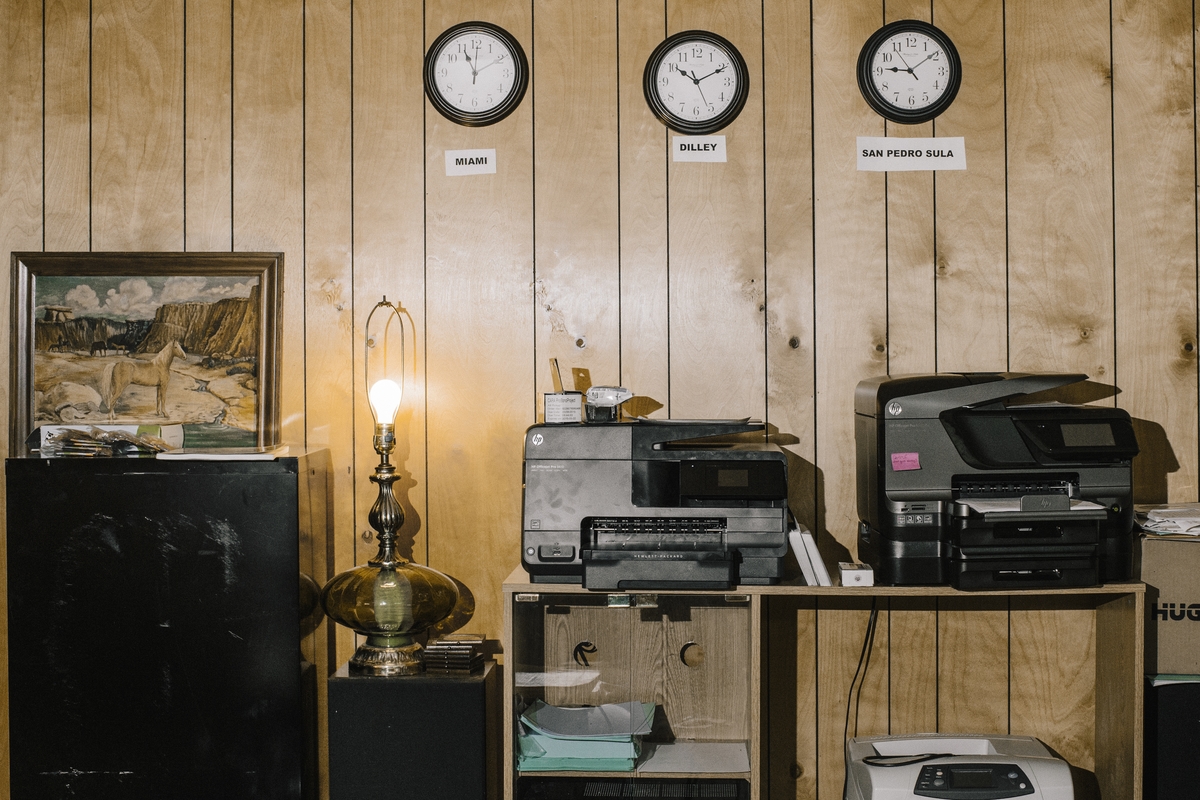 The former headquarters for the pro-bono lawyers working at the detention center. For a time, the team had to bring in everything they needed: printers, files, scanners, computers, etc., and bring it all out of the detention facility each night, though they now have space to store their equipment. 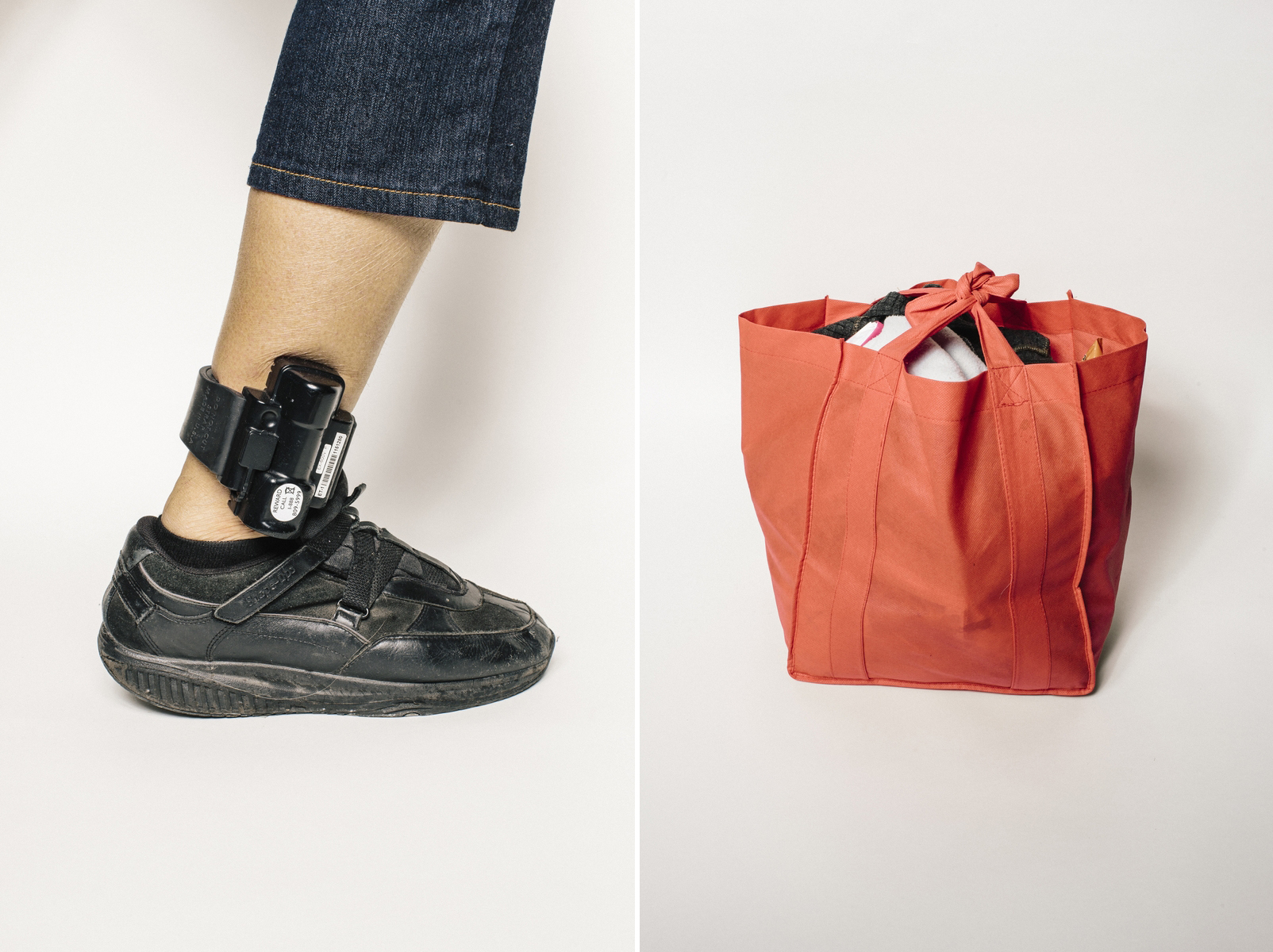 L: Women are now released with ankle monitors, which track their location via GPS. DHS argues it is necessary to ensure participation in the legal process. They must be worn at all times, and women say the bands chafe the skin. Women must plug the unit in to be charged, and some complain that they get burned as the monitor heats up during charging. Others say it brings an unwarranted stigma. R: Nearly all women leaving the facility are issued a bag similar to this one, which holds the possessions they brought into the facility. The one here belongs to a woman who was kidnapped in the state of Veracruz en route to the border. Some twenty thousand migrants are kidnapped every year while making the journey north, and abductions can earn gangs an estimated $50 million per year, according to Amnesty International and the Mexican National Human Rights Commission.

L: Yanira López Lucas with sons David, Daniel and daughter Melany. M: A room in the Mennonite House. R: After fleeing Honduras, Mirza Dalila, 21, was detained in Dilley for one month with her daughter, Valery. 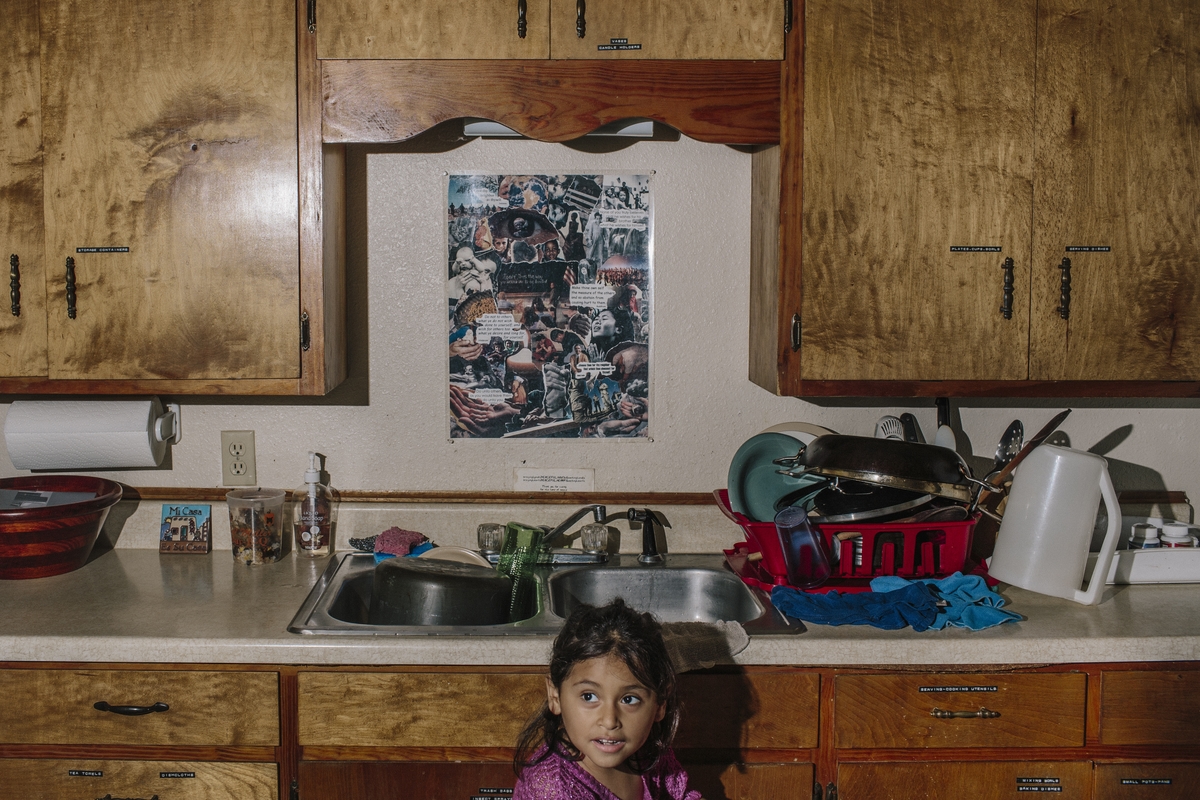 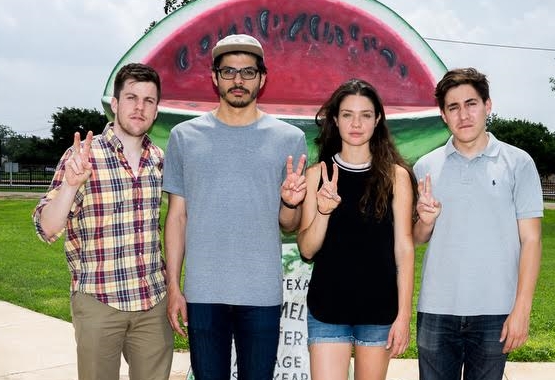