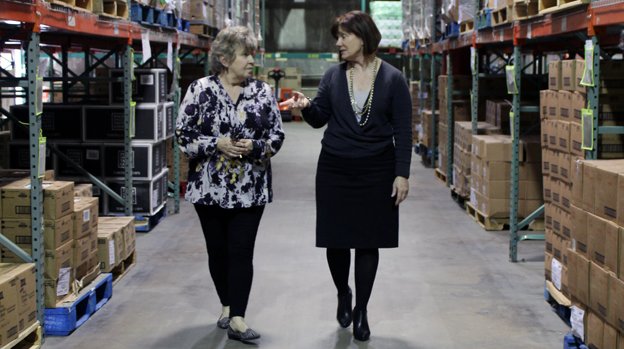 All this week, we have been reporting on the Padua Project, which is run by Catholic Charities in Fort Worth, Texas. It’s an innovative program that has a goal of getting poor people out of poverty in three years with a job, three months’ savings and off government assistance.

Yesterday we heard how Padua gives its social workers flexibility and a case load that’s small enough so they can give intensive help to their clients. Today, we hear about another aspect of Padua’s approach: collaboration with other social services organization which as we’ll hear is easier said than done.

To warn you up front: What we’re going to talk about today isn’t dramatic. It isn’t touchy-feely. You might even say it’s a bit dry. But it might be the most important aspects of actually getting things done — the gritty details of translating ideas into action. Who’s responsible for what? Who reports to whom? Who’s paying?

When Catholic Charities of Fort Worth, Texas, came up with the Padua Project, they knew right away that they needed partners. They approached several organizations. But Cindy Casey, program manager with the Padua Project who manages the different charities in the partnership, says not everyone was keen to join.

“Nobody’s going to say I don’t want to collaborate with you. They say, ‘I’ll give you the [Memorandum of Understanding] tomorrow.’ And six months later there’s no MoU. So that’s usually an indication,” Casey says.

And in the end, 10 organizations signed on. They include a JPS Health Network, the Boys and Girls Club and the Parenting Center.

But if Casey thought that bringing people together was hard, getting them to agree on something was even more difficult. A few months ago, she had an idea for what she calls a “mini-experiment.” She wanted to see whether short-term intensive help might be more effective for poor families than a more long-term approach. And since virtually every one of the 100 Padua clients uses food banks, and there’s plenty of food to distribute, she thought, what if clients could receive food once a week, instead of just once a month? And then keep the money they would normally have spent on groceries? Why not see how it works for eight weeks?

“To tell you I hit a brick wall is an understatement,” she says.

First off, clients were reluctant. Most didn’t want to use the food bank any more than they already did.

“Everybody has this perception that if someone can get something free they would jump at it. I cannot tell you what a mistake that is. There are huge dignity questions for a lot of our clients going into a food bank. They’re very uncomfortable doing it. They would say, ‘I’m stretched thin, I don’t have much, but I’m making it,'” Casey says.

But Casey persisted. “We would have to come back and say, ‘But what if you had an extra $20 a week? Is that gas money? Is that money for your kids to be able to see a movie with a friend? Is that money to put in savings?”

“ “A lot of agencies are still very competitive in that they don’t want to share their funding streams or they’re afraid that if they share data, somehow their services will be diluted.
— Marie Francis, City of Fort Worth Community Action Partners
She was able to convince clients, but then there were other hurdles.

The Tarrant Area Food Bank distributes 35 million pounds of food to 350 different agencies. Barbara Ewen, senior director of food programs, says those agencies are all independently run with their own sets of volunteers.

“We deal with 350 agencies, strong-minded, they all know what they’re doing and they all want to do it that way,” Ewen says.

Some didn’t want to try something new, others thought Padua clients were getting special treatment. Many were worried they would run out of food. That’s just not true — there’s plenty of food available, but Ewen says it’s part of the mindset that needs to change.

“Those of us who started the Food Bank movement were the greatest generation and baby boomers. I think that kind of came with a sense of scarcity. I’m not sure we have enough food and the typical sort of fears of running one of these programs,” Ewen says.

They needed to change what kind of food they ordered, when and how they were staffed. But through a delicate balance of cajoling and convincing, Casey and Ewen made it happen.

“As partners started coming on and doing it and seeing the results, I’ve been amazed at how many more are willing to do it. Yes, it’s more food to begin with, but at the end of that time, they’ve saved all those resources to do something else,” she says.

Having different charities work together is time consuming. For the Padua Partnership, it meant additional training, visits to each other’s work spaces, coming up with a common vocabulary. The tricky balancing act of navigating different agency cultures, work flows and personalities. And of course funding.

“A lot of agencies are still very competitive in that they don’t want to share their funding streams or they’re afraid that if they share data, somehow their services will be diluted,” says Marie Francis, human service coordinator with the City of Fort Worth Community Action Partners. “I think that eventually we’re all going to have to get over it because I think you only serve a client if you partner.”

And there can be giant payoffs when partner agencies share information every month, the clients they’ve seen, services provided and the amount of time spent. For example, Michelle Morgan, vice president and director of the Family Justice Center at Wenside Place, a partnership of agencies that provides services to victims of domestic violence, says it’s traumatic for her clients to have to repeat their story with each new organization they encounter.

“If I was to refer a domestic violence victim, they have to go through another intake to get to this program to get to that program. That’s just too complicated. So what we’re trying to do it streamline the process. We didn’t want the client to have to tell their story 18 different times,” Morgan says.

She says now all the Padua Partners share information using a mutual consent form. This simple piece of paper means it’s easier for the clients and it helps social workers coordinate and plan. Casey says it also helps partner agencies see all of the client’s needs.

“We’re contacting the staff we’re going to be working with, saying, ‘This is the information we have on this client. Yes, they might be coming in because they have an appendectomy, but just so you know, this is what’s going on with their personal life as well.’ When you’re dealing with something like domestic violence or severe poverty that extra information is the key to making sure you’re putting together a plan that’s going to work for that client,” Casey says.

As these organizations have been working together, they’ve been sharing best practices and co
ming up with solutions together. Staff members build personal relationships with each other — and that can lead to solutions they never knew about.

Casey talks about one client who was bleeding for months but couldn’t get medical help because she was undocumented. She mentioned it to a colleague Dawn Zieger, executive director of access and integration with JPS Health Network.

“There is a separate grant that Dawn knew about that was going to allow this woman to get medical help. It all came about because we were sitting down and having a conversation at a table saying ‘there’s a grant for that.’ I wouldn’t have known about that. This woman was able to get help. She’s now fine, she’s working. This changed her life,” Casey says.

“It’s time consuming. There’s capacity. There’s the clients you work with. There’s the fact that sometimes we don’t have funding and no matter what you’re going to do, you can’t fabricate something. It’s either there or it’s not. But having said that, I think we’re forming a safety net as much as we can,” she says.

It’s not that partner agencies don’t have their doubts about Padua, they do. How much more money does it cost? Is the program practical? Is it scalable? But for now, they’re willing to work through the tough spots to see whether it translates into better services for clients. And if you really want to help people of course, that’s what counts.