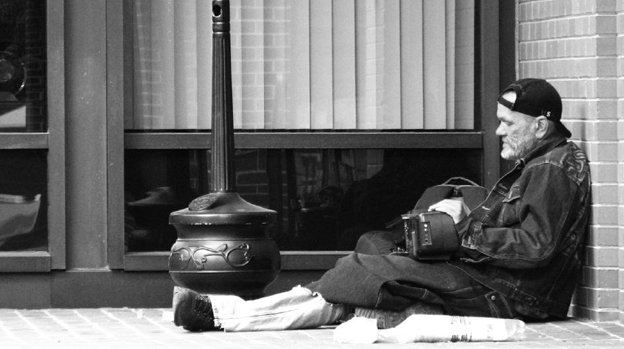 How Traditional Nonprofits Run Into Problems Trying To Tackle Poverty

There are almost 50 million people living in poverty in the United States. almost 15 percent of the population. And as long as there have been poor people, there have been others trying to help them. But it’s usually an uphill battle; it’s oftentimes hard to find any difference that all that effort makes. This week WAMU’s Kavitha Cardoza is bringing us a series focused on poverty. She spoke with Morning Edition host Matt McCleskey

Kavitha Cardoza (KC): All this week we’re looking at a program that’s trying something different with poverty. But today, I want to talk about some of the underlying challenges. We live in D.C., one of the most powerful places in the world. And it really stood out to me how rarely we get to meet poor people and hear their stories. And I say that as someone who grew up in India, where you interact with tons of poor people every day. But here, poverty is so hidden. Think of people who work minimum wage jobs — office cleaners come in overnight; if you have a maid at home, she comes in when you’re at work. And if you think of say, a McDonald’s, everyone is wearing a uniform and looks the same. We have sanitized poverty.

Matt McCleskey (MM): And people also feel so ashamed, they cover it up, right?

KC: Absolutely. So a few years ago I did a series on the 30 million adults in the U.S. who struggle with basic literacy — they can’t read a menu, a pay stub or a bus schedule. That’s when I met Shirley Ashley three miles from the U.S. Capitol.

KC: It took me several minutes, Matt, before I caught on. This wasn’t about her glasses. This was one of the ways Shirley Ashley hides the fact she can barely read.

MM: And it’s not just that she’s not trying really hard.

KC: We tend to see poverty as fixed when it’s really fluid. Of course it’s about not having enough money, but we tend to forget all the challenges that go along with that. It becomes about food and housing and transportation and healthcare. And each of those problems leads to more problems.

A few years ago I spoke with Blossom Ojukwu, who found herself in a very different financial situation when she was 12. Her father, a lawyer, was arrested for fraud. Overnight she went from living in a very comfortable middle class family to struggling. Her mother was suddenly a single parent, supporting three children.

KC: Well, think about it. The TV may be the only entertainment your family ever has; it may even be too dangerous for the children to go outside to play in some neighborhoods. The cell phone, you need a way for someone to contact you if you’re looking for a job. Or if you need to call the shelter and find out if there’s a bed available that night. Or if you need to check on your children. And the fancy sneakers? I spoke to Greg Kaufmann about that. He’s the editor of a website called Talk Poverty. He says: put yourself in a poor parent’s place.

KC: Absolutely. There are more than 14,000 in the Washington Metro region alone that are what’s known as “human services organizations.” They help with say food, shelter, healthcare. But most of them are too small to have a measurable impact; they have a budget of less than $25,000.

MM: And I guess there’s also overlap in mission too.

KC: Yes. And more important, there isn’t a lot of incentive to collaborate. During the recession a few years ago, several nonprofits were really struggling and at risk of closing down, especially those dependent on government funds. And so they were encouraged to share back-office staff like say a business manager. But I remember someone telling me it was difficult to even get nonprofits to share a printer! Part of it is each has different ideas about tackling the same problem, they want to do it their way and they all have different governance structures. And different ways of measuring success.

I spoke to Bruce McNamer, president and CEO of the Community Foundation for the National Capital Region, which works with lots of human services organizations throughout the area. He says the biggest challenge is charities compete with each other for funds.

MM: Well, Kavitha. Clearly lots of issues there about coordination. The program we’ll hear about later this week is trying to address that, right?

KC: Yes. But I do want to say there’s no easy answer. And two, we don’t know as yet. It’s a three-year program and the results aren’t in. But they’re trying something new, something creative, at the local level. And that’s what I’ll be focusing on every day this week. I went into this not knowing what the outcome would be because I really agree with something I once heard Katherine Boo say on air.

KC: Right. She wrote “Behind the Beautiful Forevers” — a book about poverty in Mumbai.

She’s covered poverty for years. And she said journalists often cover poverty by going to a nonprofit and doing a story on someone who is doing well, they’ve had challenges, now they’re fine. The story ends with everything tied up in a neat little bow. And Boo said that’s doing listeners a disservice because then they think that’s how it is. There are no relapses, no challenges, no one who doesn’t make it. And that’s just not true.

MM: Its more complicated than that. Thanks, Kavitha. I’m looking forward to the rest of your series.

Come back the rest of the week as Kavitha reports on a nonprofit that is taking a different approach to poverty.