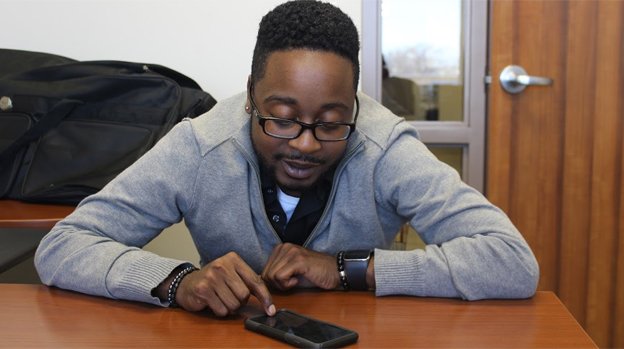 The Personal Approach to Lifting People Out of Poverty

The Padua Project in Fort Worth, Texas, is an innovative pilot antipoverty program run by Catholic Charities. Staff there work with a small group of poor people, trying to move them to the point where they can support their families, have three months of savings and get off government assistance.

One of the challenges is that social workers who help poor people typically have large caseloads of clients and lots of paperwork, often leading to burnout. The Padua Project is trying to change that with what they call “supercharged” case workers with manageable caseloads and the freedom to come up with creative solutions to problems.

Trucks barrel down a busy Fort Worth highway. It’s a sunny day in Texas and Bryan Knox, a social worker with Catholic Charities, is en route to pick up Keith Collins, a client he’s been working with for almost a year now. He says Collins reminds him of his uncle, who was also an addict.

“I want to be able to change Keith’s story because I don’t want his story to be like my uncle. My uncle is 50 some years old now and he’s still on the streets and not able to get work and not wanting to get work because he’s still suffering from that addiction,” Knox says.

Knox has been a social worker for seven years. He’s been impressed by how hard Collins has been working to turn his life around. He’s been through rehab, just earned a certificate in basic food prep and today he’s got a job interview. It’s a step up from his dishwasher position.

“You met with Keith, he’s very motivated, he seemed like he was excited to go today. I feel like this is the best way to get this taken care of, to just go ahead and pick him up,” Knox says.

I met Keith Collins the day before. And Knox is right, he was excited and motivated. When I spoke to him, Collins was looking sharp in a gray suit and tie with a briefcase. He spoke softly about his alcoholic mother and his unstable childhood — his troubled teen years — his adult life spent mostly locked up.

When Collins got to Catholic Charities, he was living on the streets, tired and troubled. Then he was enrolled in Padua. He got help with food, clothes and shelter and was doing great. Until he relapsed.

“The thing with other social service services, they only allow you to mess up one time. This program don’t. Instead of cutting me off or criticizing me, they supported me, one of my caseworkers said, ‘We in it for the run. We in this for the run.’ People like me need that. We’re not good alone,” Collins says. “We have to have a network of supportive people who believe in us. With Padua I’ve learned that if you’re not going to give up on me, why should I give up on myself?”

That’s one of the hallmarks of Padua.

Bryan Knox says in his previous job, he had 60 clients. He could only meet with them for a certain amount of time, no matter what their needs. And solutions were often dictated by funding. The word “overwhelming” comes up a lot.

Now he works with a partner. He and his colleague Kimberly Lawrence have a combined case load of 16. “So that we never have to say ‘that’s not in the scope of our work’ or ‘That sounds like a real problem. Let me give you a phone number to a place that can help you with that,’” Knox says. “Now instead we can say, ‘Let’s sit down and talk through that.’”

Then they take it a step further. They actually accompany clients to everything from medical appointments to school meetings to job interviews. It’s a win-win. Clients feel like they have someone in their corner. Case workers feel like they can follow through.

Lawrence talks about visiting a client in rehab: “On about the fifth day I’d been there, he told me, ‘You know, everyone wants to know what this program is. Because nobody has ever seen anything like this where a case manager shows up five days in a row to meet with a client.’ That’s the Padua Promise.”

It also means a sense of continuity for clients, especially when they partner with other social service agencies, says Michael Garcia, another social worker here. “A lot of times it’s not a smooth transition out of those services and so for us to be there to make it smooth to give it some stability, we’re always there, I think is critical.”

Padua case workers are paid more and given a lot of freedom to be creative. They all carry tablets, so when an agency needs a letter, they can type it up right there and clients don’t need to take any more time off work. In at least one instance, Kimberly Lawrence says they bought a car for a client, in another case it was a gym membership.

“You put $30 toward being able to build social supports, interact with other people, give yourself a physical workout and fight depression all at once. That’s a pretty big bang for the buck,” she says.

But all this support doesn’t mean that the project always works. In fact, 25 of the 100 Padua clients have dropped out. A few moved out of town, others can’t be reached. Many say they just don’t want to be part of Padua.

Knox says one reason is that Padua is a two-way street: “They wanted that better assistance but they didn’t want to put in the work. I always reference sports; you have to practice before you can actually be a championship team. And it goes the same way in life.”

Michael Garcia, another social worker here, says he felt they didn’t do a good job in the beginning explaining how intense Padua would be.

His client isn’t responding to his repeated calls, but Bryan Knox sticks with it. (Kavitha Cardoza/WAMU)
“We’re going to be part of your life intimately, we’re going to ask all these personal questions and we’re going to be in your house 3-4 times a month. And some people didn’t realize how intense this was going to be,” he says.

Kimberly Lawrence says many clients struggle to see a way to the future because they’re stuck in the past.

“One of the biggest obstacles that gets in clients’ way is grief and loss over what they had and what they no longer have. Whether that was that career or the family that fell apart or the house they used to pay a mortgage on and now they’re in a shelter. So many of our clients have their eyes turned back to the past. You have to be forward facing,” Lawrence says.

In It for the Long Run

We’ve reached Keith Collin’s apartment. Bryan Knox, the social worker is starting to look a little worried because he’s knocked a few times but no one is answering.

“I think I need to call him again.
I hear the dog, but it doesn’t look like anyone’s here. I’m going to try to call him.”

No answer. Knox calls Collins’ girlfriend. Then his cousin. Then he knocks again.

“This whole week, I was talking to him every day this week. The fact that he’s not picking up. Now, I feel like…”

Knox trails off. He slides a note into the keyhole and walks slowly back to his truck. The day has been discouraging — not at all as he’d hoped. But then Knox squares his shoulders and takes a deep breath.

That’s the Padua approach. As the social worker told Keith Collins awhile ago, they’re in it for the run.