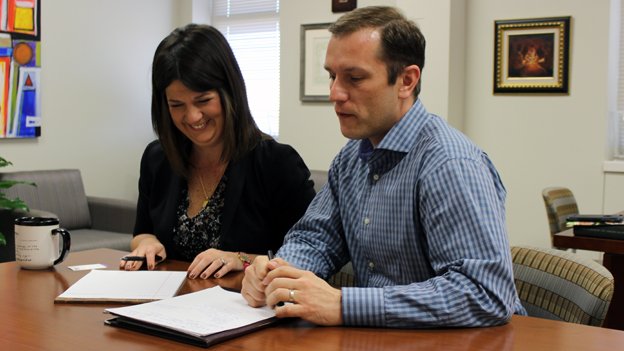 Why Fight Poverty When You Can End It?

For five decades, tens of thousands of people have fought poverty. Trillions of dollars have been spent, but poverty is a stubborn enemy. We keep fighting it, but we never seem to win.

Occasionally, someone tries something new. In the second part of a five-part series, WAMU’s Kavitha Cardoza tells us about one innovative program in Fort Worth, Texas, that may have cracked the code.

The phones never seem to stop ringing at Catholic Charities in Fort Worth, Texas. It’s a pretty large social services organization. It’s been around for more than a century, and it serves around a 100,000 people every year — most of whom are not Catholic. Typically, Heather Reynolds, the CEO of Catholic Charities Fort Worth says they give away money.

Now she says it’s about $250 a family. But really, it’s all about crisis management. People are about to be evicted, have their electricity cut off, a serious illness — pretty typical stuff folks who work with the poor deal with. Not just here, but in charities all over the country. Maybe the world.

And then one day, when she was in her mid-20s, Reynolds read an article about the head of a homeless shelter retiring. “He was quoted in the paper saying that after serving for two decades in his role, he really felt like the homeless in our community were no better off than the day he started.”

Now he was probably trying to reinforce how great the need was, how they shouldn’t give up. But for the young, ambitious Reynolds? It had the opposite effect.

“I just thought to myself, ‘That is not the legacy I want to leave.’ How can I come to work every day and try to inspire a staff, and a volunteer base, and a donor base with a message of ’20 years later, we’ll be no better off?’”

Something needed to change. And because this is Texas, it couldn’t be about tiny tweaks. Go big or go home right? So they decided they would figure out how to end poverty.

You read that right: End. Poverty. No more just crisis management from one problem to another.

For one thing, it would mean creating a program that would get to the root of whatever was making people poor. They started small: 100 clients the first year. The goal? In three years, each person will be financially self-sufficient. Each person will have three months of savings. And each person will be off government assistance.

Santoni started by looking at all the challenges charities face and then looked at how to solve them. And, no surprise, one of the biggest challenges is money.

Santoni and Reynolds bring in this big, complicated, convoluted flowchart showing the benefits and services available to poor people.

“This was put together by the House Ways and Means Committee staff. Isn’t that great?” says Santoni. “We took a printout to remind ourselves, this is part of what we’re trying to fix.”

There are almost 100 federal antipoverty programs — $1 trillion a year. That’s not counting state, local and private funds. This is where I should probably mention something that differentiates Reynolds and Santoni from many others who work in this field: They believe there is enough money available to help the poor. Just that the way you access it is all screwed up.

“If you look at this, if I’m somebody who’s in need of assistance, here’s a pot of funding I could access. This would help me pay my summer air conditioning bill possibly. That’s managed by the federal government and comes down to the city government. That would be one visit I need to make. If one of the ways I can help my family in financial crisis is getting my children on the children’s health insurance program, that is administered by the state of Texas. So I would need to go to a state office for that — different office than what I’d need to go to for here. It goes on and on and on,” says Reynolds.

Each program has very strict rules on what you can qualify for. They’re time-bound. They need different forms filled out. Not to mention the logistics involved. Say you show up with all kinds of documents, you wait your turn, and then you find you brought the wrong papers.

All of which makes for what Reynolds calls “a complicated mess.”

Catholic Charities’ new program will still access federal and state funds, but they also raised $6 million from private donors for the project, and they can be much more flexible and creative with this money.

After money, they needed a staff to do the work — a staff with a manageable case load. And they paired up case workers to make it even more manageable. Reynolds says a typical social worker in this industry would have a case load of about 100 per case manager. In this program, two social workers would share a case load of 15 to 20 clients.

But this still wasn’t enough, because Catholic Charities doesn’t do everything.

Collaborations with Other Nonprofits

They needed community partners to fill in the gaps. This is a tricky area because nonprofits are notorious for being reluctant to collaborate. Usually because it means sharing funds, but it’s also because they’re protecting their turf.

But remember: Reynolds and Santoni are thinking big. So they didn’t pull punches when they approached potential partners working in areas like healthcare, food, employment.

“Look, we’re trying this new thing. What we need, though, is not just, ‘Can you help us out when we call?’ It’s, ‘We want to share information.'”

They want to share not only information about each individual client needing help, but also about each other’s organization. If you know the nonprofit world, you know this is a tall order. But 10 charities went along. They saw this would make the process easier on clients. In other words, this project would be a true collaboration.

Are you still with me? OK, now they needed to figure out how to measure whether what they were doing was working. Santoni says the usual way,
counting the number of people helped, seemed crazy.

“Think about the logic of that. It forces you to want to serve more people, as opposed to fewer. We want to serve fewer people. We want to be out of business,” Santoni says. So they brought in independent researchers to measure progress.

Then the last thing left to do was to come up with a name. Their working title of The “Whatever It Takes” Project didn’t have quite the right ring to it. Then Reynolds thought of St. Antony of Padua, the patron saint of poverty. And that’s how the Padua Project was started.

All this week we’ll look at how this vision translated on the ground and the lessons from North Texas for everyone else.