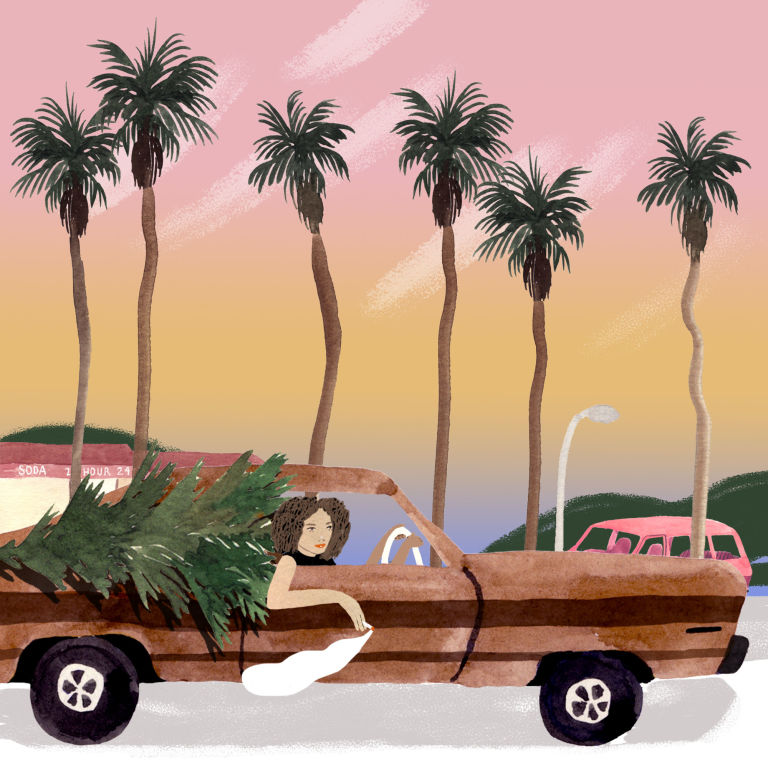 Every Year the Tree

I have a thing for Christmas trees. When my mother and I lived in a crappy apartment on Westminster Avenue when I was twelve, we had a janky-ass fake Christmas tree. It was sad as shit. It was the saddest thing you ever saw. She put it together and placed it in front of the gold-veined mirror with small mirrored shelves we called the Bar. I do not know why we called it that. Maybe we assumed other people put alcohol on it. Normally my mom just put little Hallmark figurines, and those big cocktail mugs you get from Benihana, a geisha and a sumo wrestler.

There is a bus stop on the corner of Palms and Sepulveda right near our crappy apartment. It’s a symbol of freedom — thrill and angst. I used to reach it through a hole in the fence outside. Across the street from the bus stop was a Grocery Warehouse. I’d hit up that bus stop when I was on the run from my complicated life with my mother. When I was on the run, my grandmother prayed for me. I can just imagine her kneeling before two porcelain busts, white long-haired people in robes, the man in blue she called O’ Lord. “O’ Lord, guide and protect Missy where she may be tonight.” And maybe she would try to get things back to the way they once were. “Do you remember, O’ Lord, when she would come stay with me in the summers? Do you remember the way she once cleaned her plate? She ate all the food. The meat I cooked. She slept beside me, her little chest rising and falling.”

After being on the run I wound up in Mainstream Home for Girls. Mainstream Home for Girls was next door to Palisades High School. Six girls — two to a room. And although the small house looked like a normal house, everyone knew it was a home for girls. Walking in and out of the front door was your scarlet letter. I ducked and sneaked from the back when no one was passing by. From my room in the basement, I could hear the bells at the end of each class. I could hear the football team practice. Running back and forth their stenchy, muscled bodies. One of the guys in front, he Used. Somehow, he was raised vegan in Topanga Canyon, and then there in the bathroom shooting dope, and then there on the big field, bent over in front with a tight ass, silly dark hairs above his lip. And me, I’d wave as I walked by, because he was one of the few who knew I’d been one of the Throwaways living in the home next door.

Another good thing about that intersection of Palms and Sepulveda is you could steal Christmas trees from the Grocery Warehouse parking lot. When I was finally living on my own at twenty, away from my mom and no longer in foster care, I hopped the fence and took a small one and threw it over the fence, and we stuffed it in the back of my roommate’s brown Chevy Nova. She was a Hare Krishna and didn’t give a shit about Christmas trees, she just liked the thrill of it all.

I stole throughout my youth. We stole premixed Club alcoholic beverages. Sex on the Beach, Long Island Iced Tea, all lined up in back in the corner store where my friend’s mom sold tamales. Where we bought jabón for the dogs with fleas. We stole the Club drinks and then smoked pot. It was the two Cuban girls, the one black girl, and the Mexican girl, and the two white girls who were also sisters, and me, the blackapina. The white girls were Eastern European, or from somewhere that made them hairy, and they used Jolen to bleach their moustaches. We hung in the apartment where the Mexican girl lived with her father because he was never home. There was a graffiti artist there named Baba. Big and beautiful. He was like Maverick in Top Gun was to me when I was little. Something special. I drew pictures of Africa and drank the Club drink, and smoking pot made me feel like crying, and I thought about apartheid. The Cuban sisters always got in a fight. They’d fight about clothing, how the younger one messed up the older one’s stuff. The younger one had acne and liked to get wasted and the older one always had her matte chili MAC lipstick on perfect.

At first, in the group home, Mom sent a card. One every day. One of those pastel cards with the calligraphy, To My Daughter With Love. As time passed, it would be a card a week. At one of our visitations when I was fifteen years old, she picked me up in her ugly car and drove me to Marie Callender’s, the pie shop across the street from the Pic N’ Save. “Here, poopee.” This is what she called me. This is what I hated her calling me. She handed me a bag, filled with cards. Each one marked with a different day of the week. Monday. Tuesday. Wednesday. Thursday. Two months in, I’d bailed on many of our visitations — I complained of sickness, or my period, or homework, but really I was just tired of being a disappointment.

“When are you coming home?” she’d ask.

In my twenties I left that place of stealing, that roommate with a Chevy Nova, and moved to Oakland, where I no longer stole but was just poor most of the time. I wanted a tree so bad and didn’t have a car, or even know how to drive yet, so I bought a Christmas tree at the Home Depot and pushed it home in one of those Home Depot lumber carts. I pushed it all the way down San Pablo, past the Pak N’ Save, past the casino bar where everyone bets on horses and where my play-brother threw darts and drank every day when he was “on vacation” (from sobriety), past the Bank of America where I got jacked, past the Giant Burger all the way to 53rd Street. None of my roommates were home and I was left to decorate the tree by myself. I felt lonely doing it. Because once again it felt like I was the only one who cared about this thing.

That kind of caring, that kind of hopefulness, always makes me think back to being a teenager at that home for girls. At night, all the girls in the group home lay there after lights out. My roommate Olivia, me, the two girls next door, the two girls down the hall, and the case manager (some woman who was paid to spend the night, most often a well-intentioned student of psychology. We made a point not to like her too much for the mere fact that she got a paycheck to spend time with us). First, we sat up and gossiped and giggled. Then we lay down on our backs, then facing each other, and, finally, we turned away, facing the walls, signaling it was time to sleep. We kept our talk quiet — a secret thing — about nothing too important, unless one of the girls was in love, and then she was planning A Great Escape. And because we were teenagers, this happened often.

Perhaps O’ Lord saw our late-night tears. Maybe he was present when we were last slapped by our parents. And as we lay there growing wilder, untrusting and running further away from where we came, maybe O’ Lord was there, stroking our heads at night as we dreamed of being loved. Above us were stars, the same stars for all the world, and down the block below was the highway that led anywhere, back to our mothers, or away to our lovers, or further even to the lives we wanted, and beside the highway was the ocean, unsafe and fierce and uncorrupted by the rules of this world.

I knew I met my match at 33 when my Beloved and I were driving down Sunset Boulevard in Los Angeles on our way to buy a tree and she confessed she’d always wanted a flocked tree growing up. Flocking is that incredibly environmentally unfriendly process that makes a Christmas tree appear like it’s covered in snow, and I told her that we could have one and her face lit up — so bright
— just at the idea …

“Yeah, we’re grown-ups. We can have whatever we want.”

From my room in the basement of the group home, I could hear the football team. The cards from Mom stopped altogether. The both of us — losing. Though it hurt when she asked, When are you coming home, it hurt more when she stopped asking.

During those early days with my Beloved, we had a small rough patch, and we talked about breaking it off one afternoon, but shortly after we each left for work she texted that she wanted to make it work: “Can we have Christmas together?” And I said, “Flock yeah.” And that was a nice joke. Today was our seventh year of putting up a tree in our house with coral-and-white-striped awnings over the windows. The awnings are for rain but really they just hug leaves and baby sparrows. As a kid I would’ve spun a fantasy about them. That they served as slides for elves and fairies. That they were a bridge from one safe space to the big scary world. These were the kinds of stories my mom told whenever times were difficult — she’d weave tales of small snow-filled towns in New England. Another life and time, when things were nice.

She used to give me an advent calendar every year. One year, when we couldn’t afford the calendar, she got me a tiny stocking from the 99-cent store. Every day she’d slip a note in it. A promise or some praise. Our last Christmas together, she took me, without permission, on an unsupervised overnight visitation to my grandmother’s house by the old Army base. The visit was cut short on Christmas Day when my mother yelled in my face and shook me by the shoulders. Later, my grandmother, Lola Virgie, forgave the shaking and the screaming, swiped the crumbs of the day away, and proclaimed, “Listen to your mother. She knows best.”

In this house my Beloved and I are free. The house is free of rage, and the fridge is free of beer. We are free to make love or curl up on the couch and binge-watch shows about monsters, or people like us, or shady people, or animals. We are free to argue from one room to the next oom, or to ice each other out, have big walls of silence and discontent. We can pee with the door open. We can make big pasta dinners, and grill chicken on the barbecue, and we can sleep with our dogs in the bed. We can clean the house in our chonies and play the music loud. For a couple of weeks in December it is full of cheer and smells of cedar and pine and looks the way I always imagined a house would look in winter. The little white lights twinkle on our I-flocking-love-you tree.

My Year Without Health Insurance

‘They Deserve To Be Heard’: Sick and Dying Coal Ash Cleanup Workers Fight for Their Lives