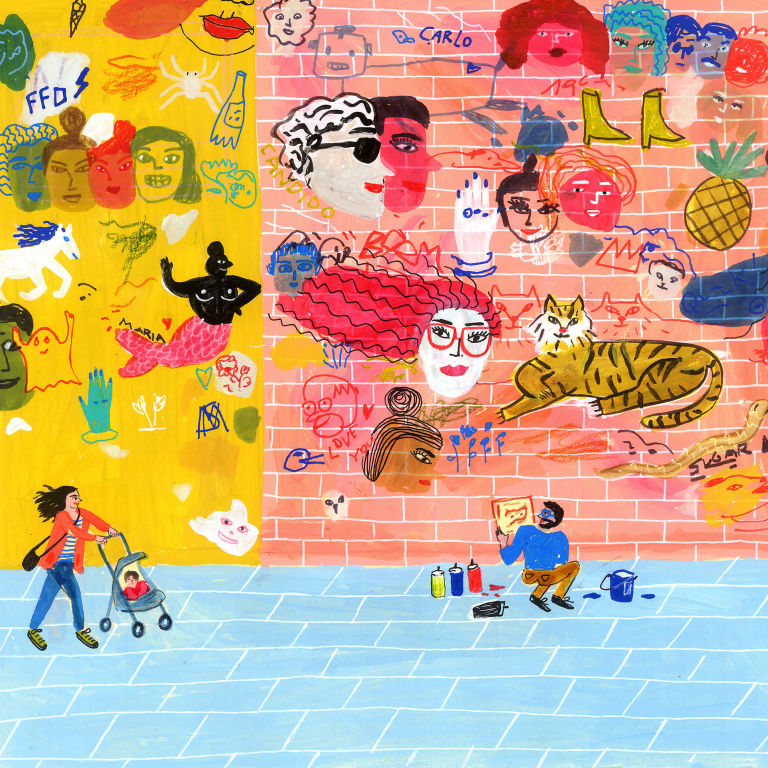 Befriending a graffiti vandal in Appalachia freed me from many things, one of which was my dreams.

I dreamed of a perfect marriage. I dreamed of a good teaching job. I lived in a poor place, the poorest county in my state, in the steamy foothills of the Appalachian Mountains. But as a graduate student, I didn’t really see the broken windows, the burned-out trailers, the drug arrests — all the evidence of struggle.

Then, midway through my English-degree program, my husband left me. We had a young son, and I didn’t know any mothers in town, especially not any solo mothers. I barely knew the town, beyond the brick gates of the university, covered with weeds that were carefully browned with poison before I could learn their names (jimsonweed, jewelweed). I didn’t understand the poverty of where I lived. I didn’t know what I was going to do.

Always I had written: stories, essays, poems. Throughout my day jobs as a high-school teacher and then as an adjunct, I had made it work; I had found the time for art. But now, I saw no way. I could summon no energy. I could find no beauty in the gray hills. I had to take a leave of absence from teaching because I had no child care. Done with coursework, I was supposed to be studying for exams, but I spent most of the time rocking the baby, who batted away the pages, who would not nap unless he was physically on my body. My days were lonely, broken with lost sleep.

Sometimes in the stroller my son would rest, so we walked. We walked places I had never been before. On the bike path that used to be a railroad, by the company town that used to house the miners, by the tornado-ravaged trailer park, by the red river. It all looked like ruin to me, if I even bothered to look at all.

It was walking by the river when I saw her: the image of a woman kneeling, a chickadee flying from her palm. It looked like she was offering the bird to me. A flurry of white wings, the woman in black and white.

It was a painting on the side of the bridge.

A three-foot-high graffiti piece, illegal — and the most beautiful thing I thought I had ever seen. A woman staring straight into me.

In the quiet by the river, my baby finally napping, I started to feel not so alone.

I began to notice more and more graffiti, down alleys, on old barns: a girl kneeling, three crows surrounding her. Her hands were handcuffed; one bird held the key.

I started to feel like these graffiti pieces were guardians, protectors.

I’m not talking about tags, which are signatures or names of graffiti artists. These were graffiti pieces, short for masterpieces. And they were masterpieces. Walking by the railroad tracks, where the highway bridge was painted with colorful tableaux six feet long, I felt like I was in the presence of something hallowed. It felt hushed and holy.

So the train tunnel rising out of the woods was a masterpiece. In a way, so was the shuttered bar, its windows bursting with goldenrod. So were the valley of ferns and rusted car parts. So was my town. And so were its people.

I felt a surge of hope, seeing these flashes of art where before I had seen only rust.

But a graffiti artist had none of these things, either.

I met a graffiti artist — for the first time — because I ran into him, painting on the street. I saw a stencil on the sidewalk: a sheet of cardboard, cut into the shape of rope. I recognized it; I had seen the image before, in a painting sprayed up on the highway bridge.

I looked up and saw the artist, holding the stencil with gloved hands. He saw me. He wasn’t panicked at being spotted. If anything, he seemed relieved. Now he wasn’t alone.

That began my first friendship with a graffiti artist. I had felt the pieces were people — and now the artist told me their stories, and I learned how to make them. The pieces were born of ingenuity and trash, used cardboard nicked from the curb or foraged through Dumpsters. The artist took me to his studio, which wasn’t a studio at all but a basement full of pieced-together parts: a taped-up cutting board, a projector held in place by a brick. The artist taught me razor blades could be reused by sharpening them, clotted paint caps revived by blowing through the clogs.

I starting writing about graffiti, and through research, met other artists online: one in New York whose graffiti was marked by desperation; grieving for a friend, she had reached for a marker and scrawled on a mattress left for the trash. An artist in the Netherlands, a solo mother like me, who expressed her sexuality through stark black and red images of women, some of them self-portraits, painted on the walls of an abandoned warehouse.

What these artists had in common was a burning calling, a desire to give art away — and no money. No professional stage.

I started showing up more, for gallery openings, for events in my own town. I met other local artists. A cartoonist/bartender/cook who drew comics about his kids. A musician who made zines about consent. Another solo mom who soldered stained-glass windows.

These were not artists who had, by conventional standards, made it. And yet they made art constantly — sometimes at “Art Night,” where we would meet at my friend the cartoonist’s house (which was right next door to my friend the screen-printer/bartender/drummer’s house) after our kids’ bedtimes, sit on the floor, and just work. Even if nobody was reading or watching or buying what we made. Even if nobody knew we made anything at all.

My new friends accepted me, and they accepted the conditions of my life: I was always tired, frequently running late, preferred to meet at a park so my kid could play and I wouldn’t have to pay for anything.

My friends accepted me as an artist, too. They didn’t just ask me: “How are you doing?” They asked: “What are you working on?” We shared drafts and dreams. A sketch my friend made on a napkin became a stencil I drew, an artist cut, and we screen-printed together to make a broadsheet.

In this acceptance, I felt respect. In letting go, I found liberation.

My town is a place of rivers and foothills, acid creeks and old coal mines, homesteads and heroin. There are ridges and hollers ravaged by injection wells. But there are also dozens of thriving farms, tiny houses, homemade cabins — I see them now — homes made of straw bale and reclaimed wood and recycled steel and whatever. I have learned “whatever works.” Every day: whatever works. I’ll write in the car, braced against the steering wheel while my son naps in his booster. I’ll write at Burger King. I’ll write in the time I steal.

My friends will paint on walls, on boxcars, on trash left by the road.

Living where I do, in a wild and often wholly forgotten place where self-sustainability, resourcefulness, and helping others are daily tenets of life, I have learned how to eat from the land. I have learned how to live off it: how to chop wood, how to dig ditches for a driveway, how to unclog a cistern, how to harvest pawpaws and black walnuts.

I have also learned how not to bother with appearances. Not to waste time on what others think, whether or not an establishment approves or even notices.

In this way, losing my marriage, losing out on a white-collar career, and letting go or being set adrift from academia as a new mother have been the best things to ever happen to my writing. By freeing me from the expectations of being professional, of being the perfect (or any) wife, my life, divergent as it has been and difficult as it sometimes is, makes space for art.

There is no room for art in perfection. There is art only in chaos, in change, in mistakes, and in eviance. These cracks in my life have let my voice be free.

Alison Stine‘s most recent book is a novel, Supervision (HarperVoyagerUK).