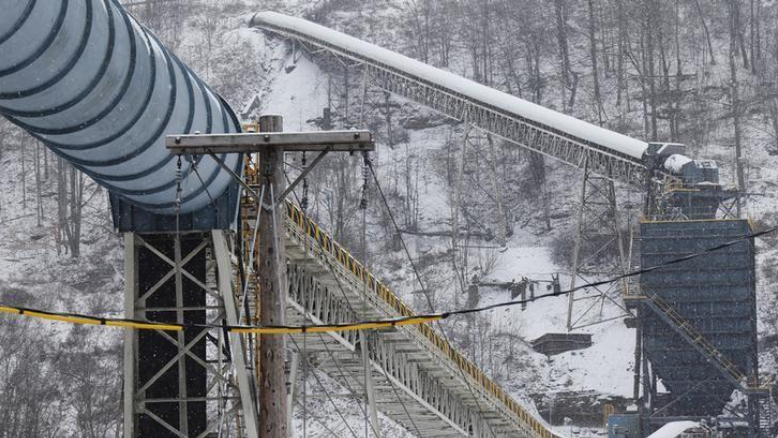 A load out line at the Century Mine carries cleaned coal to a transport area near Beallsville, Ohio, January 25, 2013. While cities such as Pittsburgh have recovered from the decline of coal and steel, rural areas such as the Ohio Valley have been largely left behind. Photo by REUTERS/Jason Cohn
Workers

I watched the mountains, what was left of them, during soccer practice. While my son tumbled on a field with other five-year-olds, I cast my eyes across the river, where the hills were a pale brown with deep gorges and no trees: foothills with flat, bulldozed tops.

Two hundred years ago, my home in rural, Southeastern Ohio contained some of the county’s largest coal deposits. Three billion tons of coal was pulled from the ground in the state mostly by hand, loaded and shipped across the country via train and canals. Towns sprung up around coal, populated by miners who shopped at company stores, who were paid by the ton, and who often only saw daylight on Sundays.

The small towns and villages of my Appalachian county were called the little cities of black diamonds. Such was the value of coal, as precious as gems. Coal paid for towns. Coal paid for schools. Coal built the Tecumseh Theater in Shawnee, the Marietta and Pittsburgh Railroad. Families would scavenge scraps out of the rocks to heat their homes. Houses, like the hundred-year-old house where my son and I live, sometimes included little washrooms on the side where a miner could clean off some of the black dust before entering the kitchen.

Coal was inevitable. A friend of mine once met a former head of Buckingham Coal and asked him how he got his start. He said when he was in fifth or sixth grade, a man from the mine had come to his school. The man had scanned the classroom, pointing out the biggest boys and asking them to stand, including the future coal company boss.

School was over for him then, he said. He was expected to report to work at the mine the next day.

That was a long time ago. As early as the 1900s, companies in Ohio looked to other sources for heat. Some mines in Southeastern Ohio closed during the Great Depression, like the Hocking Valley Coal Company – which re-opened during World War Two, only to close again for good a few years later. By 1970, Ohio’s coal production fell sharply due to a combination of factors, including regulations and scarcity of coal. Machines replaced men in the mines. Coal was replaced by cheaper alternatives, especially natural gas.

Today, according to The New York Times, there are only 50,000 jobs in coal mining. In the entire country.

Donald Trump’s promise to bring back coal jobs feels hollow in a place where coal died a generation or more ago. Those jobs are gone. Those veins are tapped. He might as well bring back the horse and buggy or the icebox.

Mine 31 closed for a simple, inarguable reason: it “basically exhausted all of its coal reserves,” a spokesperson for the mine said at the time.

The black hills have lost their diamonds.

What is a coal county like without coal? The largest town in my county has a university – which a friend who worked there as a janitor called “the golden teat” – but the other, smaller towns have few options for work. There’s healthcare and fast food, a prison, a soft drink bottling plant. There are also a lot of drugs: Ohio has the distinction of being the state with the most deaths from opioid overdoses.

“Live Like Me” someone graffitied in pink spray paint on the burned-out shell of a house near the railroad tracks in Glouster, where the mining pit closed. This house, like others, may have burned when a meth lab exploded, or simply from the winter danger of woodstoves or space heaters, trying to stay warm in a home without central heat.

To survive in Appalachia is to scramble. What may save my county and other former coal counties like it will not be empty promises, but outside companies recognizing the potential in our fertile land, our empty factories, our waiting workforce, our lower cost of life. New jobs need to come here, new clean energy technologies. Companies need to trust Appalachians to call upon the resourcefulness, self-sufficiency, ingenuity and altruism that have always guided this part of the country. Appalachia needs a new chance to do what it does best: make it work.

To believe otherwise is to believe in a dead dream, which some still do. It is to believe in white nostalgia – though some of the miners in Southeastern Ohio were Native American and African American, including slaves – the yearning for a simpler life, which was only ever simple for a few. It is the false hope of Trump, the false prophet, to call back a way of life that is dead: where the father is king, head of his household, provider and protector and pandered to by women, expected to live and possibly to die by his work in the dark and silent ground.

Alison Stine‘s most recent book is a novel, Supervision (HarperVoyagerUK).