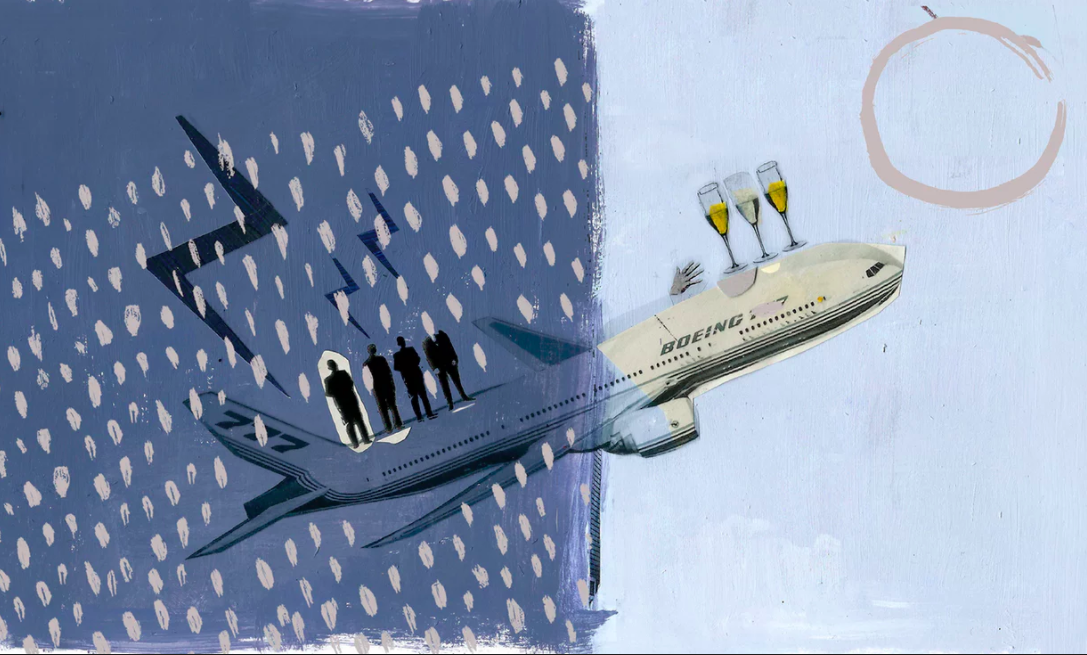 ‘If the rich continue to take the lion’s share of economic gains, unrest will spread far beyond the unfriendly skies.’ Illustration by Rosie Roberts
Inequality, Living

Air Rage: Why Does Flying Make Us so Angry? Science Says it’s About Class

A doctor is forcibly removed from a United Airlines flight, losing two teeth and gaining a concussion as he’s pulled down the aisle. A whole family with young children is dragged off by Delta. A near-riot breaks out at the Fort Lauderdale airport. Air rage may be to the 21st century what hysteria was to the 19th: a window into the sickness of our society.

Modern air travel is a perfect example of a situation in which human status is highly visible: it can be seen in everything from how the rich can pay to cut security lines to the way everyone else has to wait while those who have “earned status” board first. And then, of course, there’s the long walk through the cushy first-class cabin to a claustrophobic middle seat at the back of “torture class”.

In fact, a study of air rage and class published last year suggested that economy passengers feel the most rage when they walk through first class: it reminds them of their diminution. But first-class passengers weren’t any calmer: those subjected to the indignity of having the unwashed walk through their space, rather than boarding out of their sight though a middle door, were even angrier.

I wanted to better understand these new acts of air travel-related violence. Were they linked to our rising stress levels when we fly? Are we more likely to act out when we feel we are herded like cows in an environment we can’t control?

To do so, I spoke to Robert Sapolsky, a professor of neurology at Stanford University and the author of the just-released Behave: The Biology of Humans at Our Best and Worst. Sapolsky has studied status stress in baboons. I also spoke to Sir Michael Marmot, a British physician and scientist who found striking parallels in humans in large, long-term studies of British civil servants.

To study exactly how stress is affected by status interactions, Sapolsky observed baboons in Kenya, watching the ranking primates use to put others in their place. To measure their stress hormones, he would anesthetize the primates briefly with a dart from a blowgun. Then, he would quickly obtain a blood sample before the large, confused and likely angry animal regained consciousness.

These effects are mirrored in stress hormone responses: for the most part, those at the top have the lowest levels, except when there is instability in the ranks. In contrast, low-ranked animals are constantly flooded by stress hormones.

And in turn, these hormones affect health: lower-ranked baboons have less “good” cholesterol, higher blood pressure and impaired immune systems – all risk factors for the most common causes of death such as heart attacks, strokes, infectious diseases and some cancers.

What’s perhaps most interesting about this data is that it can’t be explained by the blame-the-victim logic often used to dismiss concern about poor people. In their natural habitat, wild baboons don’t drink, smoke, take other drugs or eat junk food – so the differences in health between higher- and lower-ranking animals cannot be caused by the bad habits of the baboon underclass.

When I ask Sapolsky about whether similar studies could be conducted on humans observed in the air – minus the blowgun – he jokes: “Anesthetic darts might be very useful, given some events on flights these days. I’d love to see this precise study done.”

Marmot’s research in the UK on civil servants – known as the Whitehall study – has found similar effects in humans.

This means that even professionals and executives who were just one rank below the top-level administrators had higher mortality rates than their bosses. And so on, down the scale.

In humans, of course, there were effects of overuse of addictive substances and poor diet – and these were more common among those who were lower in status. “We can account for about a third of the social gradient in mortality on the basis of risk behaviors, the usual suspects,” Marmot says.

However, he notes that even when factors such as childhood trauma are considered, about half the difference in death rate remains unaccounted for – other than by variation in rank. And even among smokers, the higher ranked were healthier. Just think about that: upper-class smokers are less likely to die, even when they smoke the same amount of the same carcinogens as working-class smokers.

Because this study was conducted in the UK, with its National Health Service, health differences could not be explained by varying access to treatment. Nor could they be explained by poverty, since even the lowest-ranked people in the study had jobs that paid a living wage. The gradient was linked with harm to the vast majority of those studied: unless you were the single person at the top, your health wasn’t as good as it could be if you were even higher.

In humans, then, status stress is far more dangerous to health than in baboons – even though most people do not routinely get beaten up or bitten by their bosses.

That’s because, in addition to the obvious stressors of low status such as having a precarious job and little control over your life, “there’s just endless reminders [of your status],” Sapolsky says. “Someone passes you on the street and you’re reminded of your low status by the expensiveness of their clothing. You go for a job interview and try to regulate that accent of yours that gives away your low [status] roots and you smile uncomfortably because your teeth are in lousy shape.”

This was the case when Sonja Ardoin, a clinical assistant professor at Boston University who grew up poor in rural Louisiana, felt her status acutely during her first flight when she was 21. “I had never flown,” she said. “No one in my family had ever flown.” On that first journey, she was self-conscious about how her inexperience marked her: her slowness during the security process, difficulty finding the gate, and the way she fumbled with the tray table and overhead bin.

The blight of ever-sharper class distinctions at the airport is also itself part of the spiral that increases inequality: the deregulation of airlines in 1978, which at first led to increased competition, has now produced a race to the bottom, where a lack of consumer protection laws means there’s no limit on how minimal seat sizes or legroom can get.

So, why is air rage actually worse among the upper class? Sapolsky puts this down to entitlement, but I think it could also reflect fear: fear of losing status, fear of not deserving it in the first place, fear of the people with the pitchforks.

And the latter should worry them. After all, the airport melee in Fort Lauderdale was caused by delays due to a work stoppage by a pilots’ union. If the rich continue to take the lion’s share of economic gains and create a world where there’s no middle class – only a tiny group of the wealthy and a teeming mass of poor people – unrest will spread far beyond the unfriendly skies.

As for Sonja Ardoin’s first air journey when she was 21, it contains another hidden lesson about status. During the final segment of her four-leg trip, the aircraft had a serious mechanical problem: a dramatic loss of fuel. The plane had to turn around and land precipitously. “It took a nosedive straight towards the river,” she says. “Stuff went flying. The woman next to me and I were literally praying and holding each other.” Fortunately, they did land safely.

But if they hadn’t, whether a passenger was first class or steerage probably wouldn’t have made much of a difference. When a plane goes down, everyone on it is in it together.

Outclassed: the secret life of inequality is our new partnership with The Guardian about class. Read the previous one here.