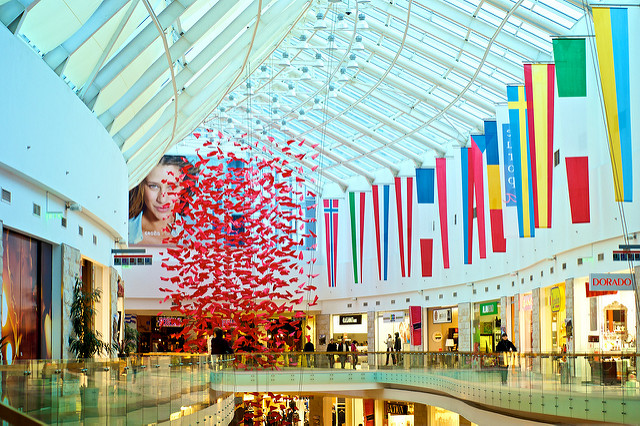 When it comes to the economy, Staten Island’s North shore is missing a big opportunity: two million tourists ride the Staten Island Ferry every year, for a free sightseeing tour of New York Harbor. But on arrival, most of the visitors hurry onto the next ferry back to Manhattan, without spending a dime.

Now, a developer is betting that outlet shopping could entice some of them to stay and drop some money into the local economy.

The $350 million, one million square foot project is slated to open in 2018. Work is already well underway with diggers and cranes now tearing up the site of a former parking lot, adjacent to the ferry terminal.

“It’s pretty exciting,” said Joe Ferrara, one of the principals of BFC Partners, the developer behind the mall. “It’s gonna reap rewards into the borough and to what historically has been a very sleepy section of Staten Island.”

According to the renderings, Empire Outlets will look a lot like a college campus with landscaping, benches and lawns for people to gather and enjoy the views.

In 2013, city planners approved BFC’s proposal, and also New York Wheel, a 600-foot observation wheel similar to the London Eye, which is now under construction nearby.

“When you combine those things together it should and can be a fantastic place for people to visit and stay,” said James Patchett, president and CEO of the New York City Economic Development Corporation.

“We have to make it a vital downtown area where people want to go and be, and then we can look at the opportunity for the next step of getting those higher quality jobs there,” Patchett said.

The project has received close to $80 million in grants from the city and state for the construction of a storm-resistant underground parking garage and for other resiliency measures.

There are risks, however, beyond coastal storms. Many malls are closing across the country as more and more shopping moves online. And while outlet centers appear to be doing better for the moment, there’s no guarantee they will continue to be spared.

Ferrara said he’s confident an outlet next to a ferry line that moves 23 million passengers every year can be successful.

“Every time we would go on vacation my wife would force me to go to an outlet mall,” he said. “And I just saw the hordes of people that would drive these centers and just spend tons and tons of money.”