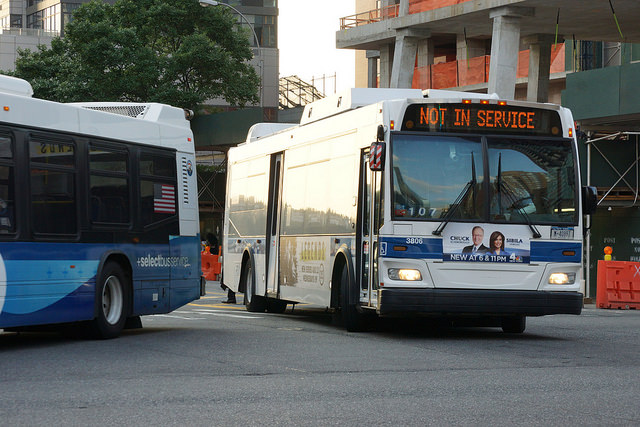 For many Staten Islanders getting to work means catching a bus to the ferry, and for residents who lives close to the ferry and should have the shortest commute, they often report that the bus is failing them.

Rosemarie Cruz, 30, lives in the Stapleton section of Staten Island near a bus that should get her to the ferry in about 10 minutes. But it’s often late and she often ends up missing the ferry by just a few minutes.

“We pay so much money for the ride,” she said on a recent morning.  “Be on time or at least get here when you say.”

Joseph Bird sits on the local Community Board’s transportation committee and films buses that skip stops and then sends the videos to the MTA. On a recent morning, he observed two buses that pulled in at the same time, and yet there were still 10 people waiting at the stop that couldn’t board because of overcrowding.

“With the potential rezoning, that’s kind of a joke if no one lives on Bay Street now and people still can’t get on buses.”

The city is considering a possible rezoning of Staten Island’s north shore that could add hundreds of new units of housing in the next couple of years.

The MTA said it has added three additional trips during the morning rush to address the crowding.

Speaking at a recent town hall meeting on Staten Island, Mayor Bill de Blasio admitted the city didn’t have a plan to address the transportation concerns.

“We’re not missing that there’s a problem here,” the mayor said. “We’re trying to figure out a solution that we can actually afford and so far we haven’t been able to find one. That’s the honest truth.”