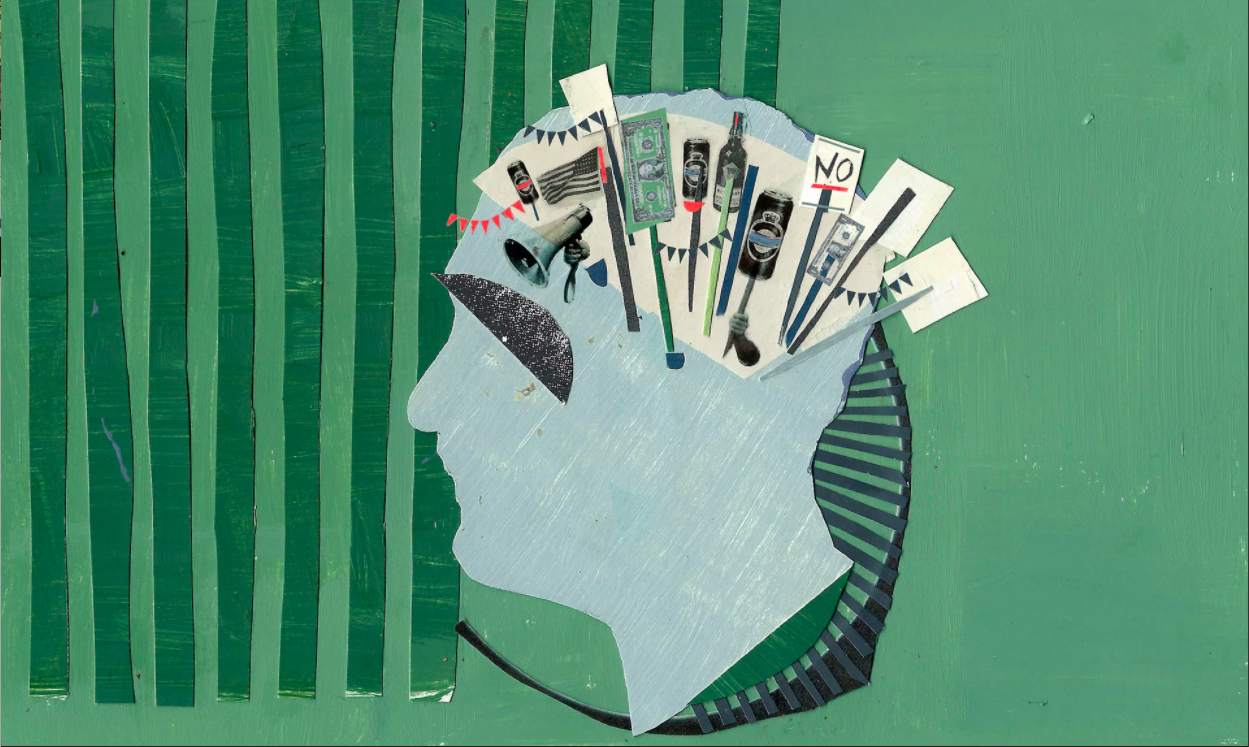 ‘The increasingly progressive messages in marketing campaigns are clearly a mercenary attempt to entice millennials.’ Illustration by Rosie Roberts
Living

“Eco-warriors” are celebrated in one video. In another, a message flashes across the screen: “We believe no matter who you are, where you’re from, who you love, or who you worship, we all belong.” Yet another ad champions the theme of girls and Stem (science, technology, engineering, and math) education and celebrates a girl-centered technology organization.

Despite all appearances, these videos are not public-service campaigns. Instead, they are advertisements for some of the most blockbuster brands around: for the car company Kia, for Airbnb, and for the phone carrier Verizon, whose ad campaign involves partnering with Girls who Code. These companies are now gesturing at liberal values through their messaging. If television is waking up politically, with shows like The Handmaid’s Tale, advertisements seem to be far ahead.

Why is this the case? For starters, advertisers are constantly looking for future markets, and younger Americans are ostensibly more liberal than their parents. Brand loyalty starts in the cradle and ends in the grave, as I wrote in my first book, Branded: The Buying and Selling of Teenagers. The increasingly progressive messages in marketing campaigns are clearly a mercenary attempt to entice millennials: they are trying to be “woke”.

The coveted demographic that has the dollars to spend on high-end products is increasingly clustered in the bluest American cities, like New York and San Francisco. In the last two decades, both capital and income have drifted there. If the Democratic party has changed, now circling around the professional classes and the very rich, the rise of Democratic consumer dollars is part of this shift, and these ads appear to be catering to it.

This all makes it seem, at least on the screen, like blue-state voters still have purchasing power – but political power and economic power are held by different groups of people. Trump-leaning rural Americans with fewer consumer dollars to spend control the polls, as the national voting system gives more power to underpopulated rural areas. And advertisers cater to richer, progressive liberals, hoping that reflecting their values will persuade them to open their wallets.

I spoke with the urbanist Richard L Florida about this. He thinks that these ads are reflecting a bifurcated country, one with different consumer tastes and different amounts to spend on said tastes: the Whole Foods shopper and the plain old grocery shopper, the “creative class” member who drives the clichéd Prius versus the equally clichéd rancher driving the pickup truck.

“Advertisers used to wonder how a spot would play in Peoria [Illinois],” says Florida. “Now they wonder how it would play in Brooklyn.” Of course Heineken would need a liberal ad, Florida says, in order to distract the buyer who’d rather be discovering a craft brewery from Michigan’s Upper Peninsula into buying a boring old big-brand beer.

The strategy doesn’t always work, as shown in the embarrassing Kendall Jenner Pepsi spot, which appropriated Black Lives Matter in the name of sugar water. But for the most part, the results are quite deft, as in the said Heineken ad, a British spot featuring a “real” transphobic lad conversing with a transgender soldier, across both beers and social differences.

According to Rob Baiocco, a creative executive at the BAM Connection who has worked on campaigns for Pringles and Starburst, all of these “issue” ads may warm the hearts of millennials, as they are intended to. But to his mind, they are also “highly suspect”. He highlighted the fakery of their woke-ness: “Companies are avidly and aggressively trying to get involved in a socially responsible space, and they are doing it horribly – they are grabbing at straws.”

“They are entering a complex conversation they have no right to be in, yet they are forcing their way in,” Baiocco says. “These creatives are trying to make their toilet paper save the world.”

“Sometimes,” he adds, “a Pringle is just a Pringle.”

Those who study commercials can also be skeptical of these precision Democratic and/or “activist” ads. “Empowering girls becomes a product unto itself. That’s commodity activism: there’s no real connection to structural change,” says Sarah Banet-Weiser, an advertising expert at the University of Southern California and author of AuthenticTM: The Politics of Ambivalence in a Brand Culture.

Banet-Weiser sees another striking omission in these goodwill ads: there is no mention of the political problem that has afflicted so many voters, namely economic inequality. Indeed, inequality is the largest driver of our national division, but it still dares not speak its name in these ads and in commodity activism. Economic inequality can only “be sold in ads or made shiny and interesting when it’s called ‘opportunity’ or female empowerment”, says Banet-Weiser. That’s because, of course, ads are ultimately manipulating us to spend, not to set our political imaginations free.

Ads with gentle anti-Trump messaging may be relatively new, but we can look to a long history of activist commercials to see what may happen next time around. Indeed, advertisers of the 1960s and 70s conquered radical cool for their own purposes. They had actors singing in perfect harmony owing to their shared passion for soda, as in the 1971 I’d Like to Buy the World a Coke spot.

That generic message of peace in the ads of the Vietnam era is now more issue-specific, however, with ads supporting undocumented workers or getting girls into technology.

There is another dark side to this: with our congresspeople refusing to even interact with us at town hall meetings, the closest we can get to having someone hear our complaints is to send a mean public tweet to the folks at American Express or Apple, or to boycott Ivanka Trump’s cl
othing line until some retail chains remove it. But these are simply companies, not the commonweal.

Since United Airlines violently abused a paying rider, the outrage at unfeeling corporations and bad customer service has grown, leading to some bitter hashtags. But wouldn’t some of this rage be better directed at our national representatives or at the jurists who made corporations people in the first place?

And yet, despite all of the limits of the woke ads – or, as some call the phenomenon, “faux woke” – and to a smaller extent, the new consumer activism, both give people like me a pathetic satisfaction. As I sit watching TV, curled on the couch in my post-election fetal position, I can believe for a moment that we exist in a different America – one where the Democratic shopper is the victor, a country that values tolerance and diversity and the education of girls like my daughter.