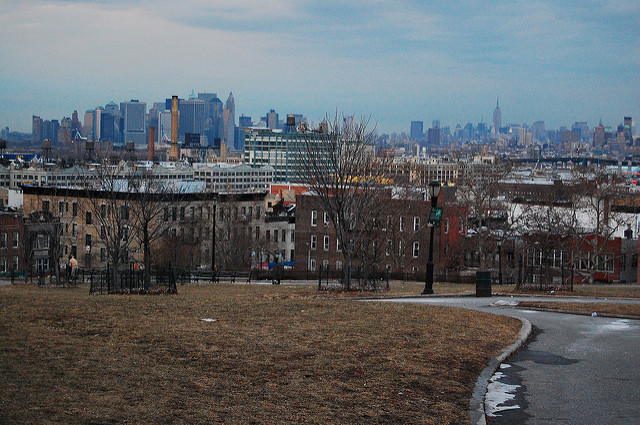 WNYC has been taking a close look at affordability in New York, one neighborhood at a time. We’re telling stories about how people make it in a city where prices for everything keep going up. Now, we’re turning our attention to Sunset Park in Brooklyn. It’s a neighborhood that’s developing fast — and how affordable it will be for residents and businesses is at stake. Here are four ways Sunset Park is changing:

1. Industry City is blowing up. Industry City is a cluster of 16 enormous industrial buildings located on the waterfront just south of Gowanus. It used to be a hub for freight and shipping, then a few years ago, developers teamed up to buy and rehab the complex. Now, it’s home to hundreds of companies — from manufacturing to media to tech. The Brooklyn Nets moved their training facility there, and there’s a fancy food court that includes what’s being billed as the world’s first avocado bar. Real estate brokers say Industry City is one reason why the residential market in Sunset Park is hotter than ever.

2. The city is investing beaucoup bucks along the waterfront.  The de Blasio Administration is pumping hundreds of millions of dollars into two city-owned properties: Bush Terminal and the Brooklyn Army Terminal. The plan is to create modern manufacturing hubs for TV, film, food and fashion. Officials say the goal is to grow jobs for people across the city, but also specifically for people in Sunset Park. For one, the mayor is promising affordable rents for clothing manufacturers who move here from the Garment Center in midtown.

3. More transportation options are coming to Sunset Park. Public ferry service has just launched from Sunset Park. And the Mayor has announced he wants to build a public streetcar that would go from Sunset Park to Astoria. The city is also considering a proposal to construct a protected bike lane along 4th Avenue. These additional transportation options would allow people in Sunset Park to commute more easily to Manhattan and other parts of the city — and make the neighborhood more appealing to new residents.

4. It’s still affordable by comparison. If you’re getting priced out of Williamsburg, Park Slope, or Fort Greene, Sunset Park is one of your more affordable options. And if you’re an investor, you can be pretty confident that property values will only go up, especially considering all the investments the city is making. But affordability is relative, and new money and new residents can price out current residents. NYU’s Furman Center listed Sunset Park among the city’s top gentrifying neighborhoods. Rents and home values are going up, even as current residents struggle to make ends meet. A quarter of Sunset Park residents pay more than 50 percent of their income on rent, and many are living in apartments that are overcrowded.

We want to hear from you, especially if you’re in Sunset Park. How are the changes in your neighborhood affecting your ability to live or work there? How do you afford New York? Let us know your strategy! Tweet at us at @byjessicagould or @pcowett with the hashtag #affordnyc.