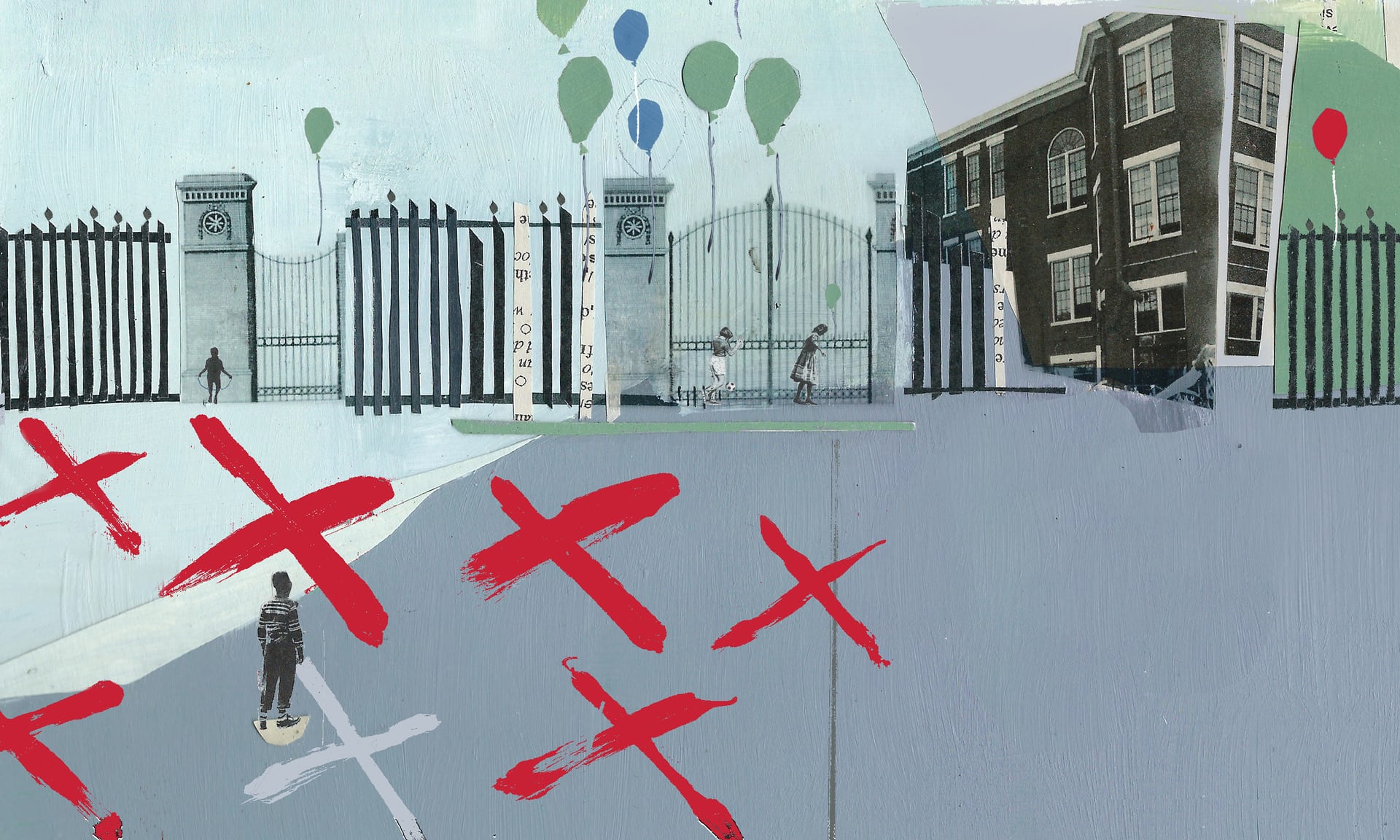 Many maintain that discussing social class or money with our children is inappropriate – nothing could be further from the truth. Illustration by Rosie Roberts
Education

How Can We Teach Our Kids About Class?

Recently, in a Maryland suburb, a high school baseball team competed against players from a wealthier suburb nearby. A mother was happily chanting for her son’s team when she heard the “cheers” of the other team, issued by both adults and kids. “They chanted: ‘Lower average income! Lower average income!’” said the mother, Jodi Jacobson. The taunts continued: “Can’t your parents afford to feed you? Can we call child protective services?” At another game, players sang “That’s all right, that’s OK! You will work for us someday!”

“It was disgusting,” Jacobson concluded. “I was astounded at the crude and cruel things said by the people in the stands”.

Echoing this episode, school bullying over social class has found an even crueler iteration in “lunch-shaming”: children being humiliated for not having enough money to pay for their public school lunches.

When parents have failed to pay, in some states children’s little arms have been stamped with the phrase “lunch money”. In others, milk cartons have been taken from their hands and their hot food dumped in the garbage in front of their classmates. The very poorest families get free lunches or discounts (if parents make less than $45,000), but other working-class households may just miss the cutoff.

Jennifer Ramo, the executive director of New Mexico Appleseed, an anti-hunger not-for-profit group that has campaigned against lunch-shaming, says such policies in some cafeterias are in place precisely because they know how embarrassing it is for the kids. They also happen to think “embarrassment is effective at getting the debts paid more quickly.” Organizations like hers have pushed through legislation, such as the Hunger-Free Students’ Bill of Rights, a ban on disgracing kids whose parents can’t pay for their school lunches.

Ramo says families who can’t pay for school lunches nevertheless don’t always apply for free or reduced lunches for all sorts of reasons – embarrassment and fear of deportation among them. As one student, Hazel Compton, told the Today Show of her inability to pay for lunch: “It just made me feel more poor.”

Lunch-shaming reflects more than the actions of individual sadists, however. It mirrors a whole system of childhood inequality in America – from the bullying children have long endured for wearing cheap, unfashionable clothes to the new low of lunch-shaming by adults; from privileged sports teams mocking their less-privileged opponents to divisions between those who can afford tutoring and those who can’t. All of these experiences can prove belittling and painful.

So how might parents – and schools – articulate these differences and costs to their children in a way that salves the wound? What do you say when one kid has elaborate after school activities, and the other can’t quite afford lunch? Are there even broader fixes?

Many maintain that discussing social class or money with our children is inappropriate. This strikes me as peculiar. After all, childhood has only become more blatantly commercialized and materialistic in the last two decades. (Just try going to a store selling fidget spinners or giant Lego kits with a kid if you want to witness the rise of pester power.) At the same time, the income inequality between their parents has widened, and kids can’t help but notice their folks are working longer and longer hours to keep up.

Learning how to have these conversations is actually the work of organizations, such as Class Action in the Boston neighborhood of Jamaica Plain. The educational not-for-profit group helps teachers and parents to talk and think about social class. Its executive director, Anne Phillips, describes its workshops and trainings as discussing “class cultures”, or social class and income, openly. Class Action’s ultimate goal is what Phillips calls “class sharing”, open discussions in workshops about “who gets paid what and why, with people acknowledging their class backgrounds and the strengths and limitations that people have”.

You might think this is just a fancy exercise for the top classes to “check their privilege”, but Phillips assures me that though they mostly work in private schools, they reach people from a range of class backgrounds within them.

Some schools have set about tackling the issue of income inequality or income difference in the schoolyard. Pre-kindergarteners at New York City’s Manhattan Country School, for instance, participate in a program where students visit others’ houses and then discuss their neighborhoods, what they have in their homes, and what kind of food they eat, as a way of starting to talk about class (and ethnic and racial) lines and differences.

As my colleague Ron Lieber, author of the The Opposite of Spoiled, wrote a few years ago, some of these children went to visit one child’s apartment where the kid host showed his classmates African instruments, and the classmates were excited to discover the area’s green taxi cabs; they also went to visit a wealthier classmate in a duplex penthouse on the Upper West Side of Manhattan.

And at the Shady Hill School in Cambridge, Massachusetts, staff developed questions to guide this work. “How do we help students understand differences, especially in a society that links value to wealth?” they asked. School families expressed concerns too – including over school benefits or potlucks being held at the richest parents’ houses.

This is the same sort of conversation I had with a mother whose child was on a nearly full scholarship at a private school (she requested she remain anonymous to protect her child’s identity). The mother can’t afford the basic things other kids have for her daughter – she couldn’t cover the expensive sweaters that composed part of daughter’s school uniform, for instance. And she sometimes misses school and parent meetings that are consistently held during the workday, and even some at night, when she can’t afford the extra babysitting.

“I tell my daughter that some people have a lot of money and have no love, and some people have no money and a lot of love,” she says. “It has forced a conversation before it would have happened otherwise, but in wealthy and unequal areas it has to happen early. You have to keep
the kid strong and confident in themselves through this.”

If we could support school curricula about social class, we might discuss the full complexity of “wealth” within the parameters of our children’s educational lives. Out of these lesson plans, we might talk more about what society values – and whether it rewards the right things. After all, a parent’s profession may not be highly remunerative, but it might reflect training or skill. Professional attainment for some of us isn’t about dollars, after all (or at least not entirely). It is about having one’s skills align with our profession. Sometimes it’s about renown. Sometimes it’s about avocation or craft.

I started to have a talk about class and money with my own six-year-old daughter this month. She asked lots of questions and I took a breath – I wanted to call Class Action to ask them what I should say next! I knew these conversations were natural, and it’s children’s job to be curious. But I won’t lie: the talks are difficult.

To start with, my daughter asked me why there were so many homeless people in our neighborhood – especially the homeless woman with the pet sparrow on her shoulder. My daughter then wanted us to give away all her snacks for the day: cheddar bunnies, lemonade. Why do we have a home and they don’t? she asked me. I explained that the people who were homeless may have had homes but have fallen out of whatever life they once led.

On the other side of the scale, she wondered why our apartment had no balcony and some of her friends’ apartments did. Were they rich? Why didn’t we have one? My answer to that question was even more convoluted than the first. (It turned out she wanted a balcony so her flowering plant would get sun.)

Money and one of its embodiments, social class, are both riveting and mysterious to children. And if we don’t challenge today’s stigma around class status, it will warp a new generation’s experience of an even more important class – the kind in which they learn. And that’s one thing we simply can’t afford.