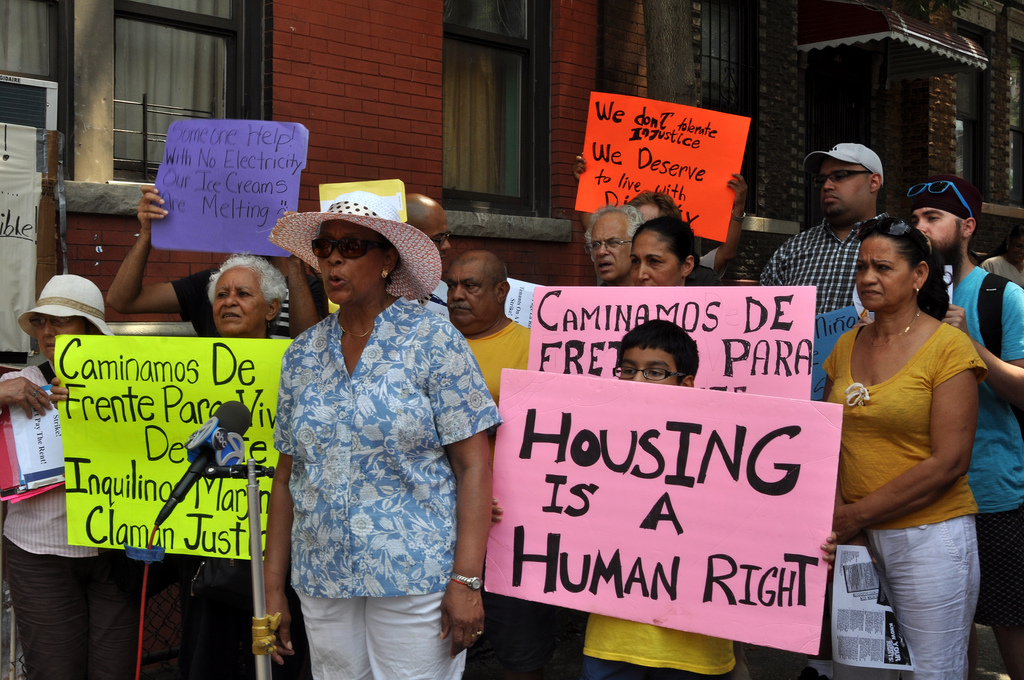 How Landlords Push Out Tenants for Profit

The state’s rent-stabilization laws are supposed to protect tenants from the pressures of the city’s real estate market, and that includes limiting annual rent increases. But housing advocates say there are ways for owners to raise rents much more, and they argue some landlords’ entire business plan depends on it.

“There’s a term we use called predatory equity,”  said Jaime Weisberg, Senior Campaign Analyst with the Association for Neighborhood and Housing Development.

Here’s how it works:

Step 1: Look for the upside.

Under stabilization, rents can only go up as much as the Rent Guidelines Board allows. And that’s kept rents at those apartments relatively low. So when predatory landlords and lenders look at stabilized buildings, Weisberg said they see dollar signs, if they can bring those rents up to market rates. “They’re going to look for hot markets,” she said. “And honestly in New York City most markets are hot.”

Weisberg said one of the tell-tale signs of predatory equity is landlords who are “over-leveraged” — meaning they are taking on more debt than the current rents support. “Because they’re not looking at the rent they’re getting, they’re looking at the rent they could get,” she said. Often, landlords in these instances will take out a larger loan in order to pay for renovations and tenant buyouts.

Step 3: Get the current tenants out.

Harassing tenants is illegal, if you can prove it. Increasing the rent when they leave isn’t. New York’s rent laws say every time tenants move out of stabilized apartments, landlords can boost the rents by about 20 percent. If the landlords renovate, they can also increase rents. Housing activists say that creates an incentive for bad landlords to push out tenants however they can. “They’ll look for all available ways to get people out,” Weisberg said. “Aggressive buyouts, dangerous construction, bringing people to court. The tactics can be soft or they can be really harsh and aggressive.”

Once the apartment is vacant and the rent exceeds $2,700 a month it can be taken out of stabilization. Weisberg said that’s the ultimate goal with predatory equity. “Then you can charge whatever you want. The tenant does not have the right to renew their lease,” she said. “They don’t have a right to all the protections they have under the rent regulation system.”

Housing advocates want changes to the state’s rent laws so landlords aren’t rewarded for emptying their apartments. ANHD wants lenders to sign on to a set of best practices. Activists are also calling for tougher penalties for predatory landlords and lenders. For example, they support a bill Attorney General Eric Schneiderman recently introduced that would make it easier to criminally prosecute landlords who harass their tenants. There’s legislation before New York City Council to create watch lists for predatory landlords and lenders.

To hear about the allegations of “predatory equity” for one group of buildings in the East Village, click on LISTEN.

Listen to The Affordability Project here.