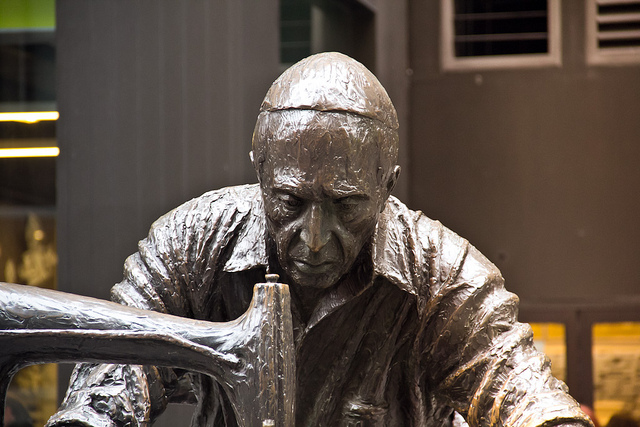 Is the Garment Center Out of Fashion?

For generations, the Garment Center has been the heart of the city’s fashion industry. But these days, it’s shrinking as companies struggle with competition overseas and high rents at home.

The de Blasio Administration wants to help — by offering manufacturers newer space, more affordable rents, longer leases, and grants — if they move to city-owned buildings in Sunset Park. They don’t have to relocate, but the city hopes the incentives will encourage manufacturers to do so. It’s part of a plan to transform the old Bush Terminal into a hub for TV, film and clothing production, and to create middle class jobs.

But the administration wants to do something else, too. It wants to change the zoning regulations in the Garment Center. Right now, certain buildings can only convert manufacturing space if they dedicate an equal amount to manufacturing on another floor. The city wants to lift that requirement.

James Patchett, president of the New York City Economic Development Corporation, says the zoning isn’t actually helping garment businesses stay in Manhattan. So the city wants to open up the area to more nonprofits, media and tech companies (and curb the explosion of hotels in Midtown).

“We feel that it’s necessary now to do something to change the course of this industry,” he said. “To us that means making a proactive conscious investment in this industry as opposed to just passively allowing the zoning restrictions that are in place in the Garment Center to continue to fail to protect these businesses.”

Building owners in Midtown support the plan saying there just aren’t enough clothing manufacturers left to fill the space they’re required to preserve. Some manufacturers that already moved to Sunset Park have said they are happy about the lower rents and modern spaces there.

Critics, however, argue that revising the zoning rules will only cause rents to spike even higher, forcing more companies to close. They add that the mayor’s incentives are only available for clothing factories to move to Sunset Park — leaving designers and specialty shops in Midtown — and that would disrupt a delicate fashion ecosystem where everyone depends on one other.

Joe Ferrara, owner of Ferrara Manufacturing, a factory on 39th Street, is president of the Garment Center Supplier Association. He says the idea of moving factories across the river is “unimaginable,” and he’d lose most of his workforce as a result.

“It completely misunderstands the complexity and sophistication of what we have here in the Garment Center,” he said. “I call it walking manufacturing. I can walk pieces and parts from one location to another in a matter of minutes and get something done. The people who are on the ground and make the clothes know how dependent on each other they are.”