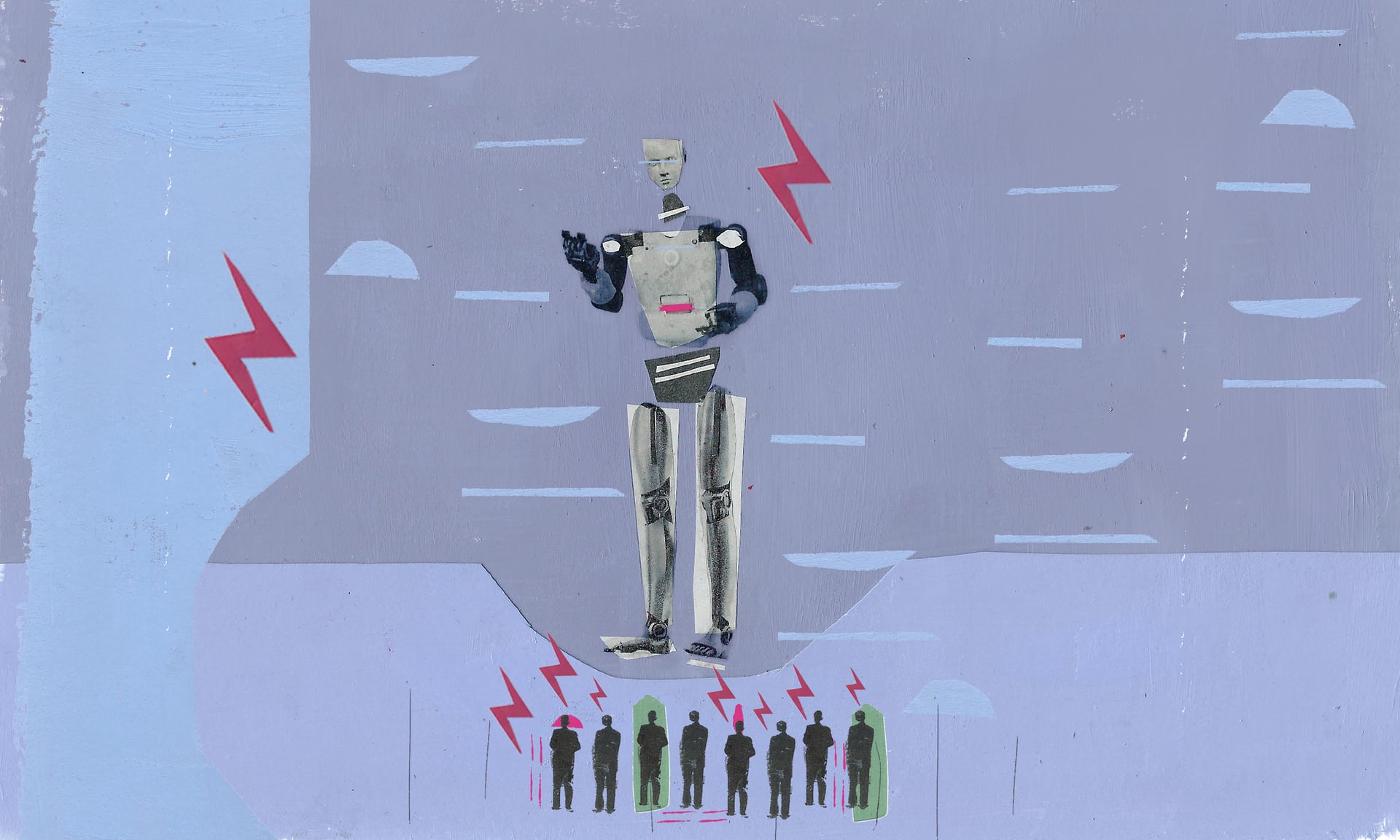 ‘We need to call automation what it is: a real threat, and a danger to critical human infrastructure’. Illustration by Rosie Roberts
Business

Automation Is a Real Threat. How Can We Slow Down the March of the Cyborgs?

We’ve heard a lot lately about how humans will suffer thanks to robots.

Recently, these dark premonitions have come from famed techno-positive-ists like Elon Musk and Bill Gates. These grandees have offered their own solutions, from a robot tax or universal basic income. But among the dire warnings and the downright sci-fi utopias (a robot for president, anyone?), the actual human pain resulting from future job loss tends to be forgotten.

Given that 38% of US jobs could be lost to automation in the next 15 years, this tendency to gloss over the enormity of this number is puzzling. And yet, most would argue that we cannot and should not slow down “progress”: that any attempt to stymy is is embarrassingly Luddite.

My question to them: why? So what if we decelerated, and established a Slow Tech movement to match our Slow Food and Slow Fashion trends? Or at the very least, what if we started to rethink who owns autonomous trucks? The effect of robotization would be profoundly different if, say, truckers possessed their own autonomous vehicles rather than a corporation controlling them all

In the meantime, we need to call automation what it is: a real threat, and a danger to critical human infrastructure.

What is “human infrastructure”? Well, infrastructure usually means electricity grids, power plants, roads, fiber optic cables and so on. Human infrastructure, on the other hand, is a phrase that lets us see that people are also, in the words of the Department of Homeland Security’s website, essential services. These things “underpin American society and serve as the backbone of our nation’s economy, security, and health”.

“Critical human infrastructure” could describe the guys in trucker-author Finn Murphy’s new memoir The Long Haul. Murphy explains to me that if long hauls become autonomous, as has been threatened in the next 10 years, his driver friends will most likely have their trucks foreclosed. With a limited education and in latter middle age, they’ll only be able work for places like Walmart – at best.

Tellingly, though, Murphy adds: “I am not going to take the Luddite perspective – driverless vehicles are going to happen. The Luddites put their wrenches in the weaving machines and they still existed. And there will still be these trucks.” (If Luddites were part of co-ops and had a stake in the automated looms that replaced them, would this have happened in the first place? Discuss.)

Murphy understands the sheer scale of what will happen to drivers like him. But the tech billionaires, cyborg jingoists, various political pundits don’t have the same empathy. They may touch on workers’ potential distress, but then they tend to launch into strangely frisson-filled discussions of a future apocalypse.

Instead of working to give robots personhood status, we should concentrate on protecting our human workers. If that means developing a more cooperative approach to ownership of autonomous trucks so millions of drivers are not left out in the literal cold, so be it. For other job categories, from nurses and legal assistants to movie ushers and cashiers, perhaps we could concoct legislation to help all strata of workers who will be displaced by our mechanical friends.

One thing is for certain: this will inevitably mean we must reduce the speed at which automation is occurring.

Indeed, given how easy automated systems like driverless vehicles may be to hack – they are quite the security challenge, as former Uber employee/hacker Charlie Miller has said – slowing down the robots might also mean slowing down a serious global calamity. (Imagine that 1973 Stephen King short story Trucks about semi-trailers gone berserk – now imagine it authored by international hackers who turned vehicles into murderers and jackknifing American security.)

There are some ideas out there that seek to slow down the march of the cyborgs. The not-for-profit organization New York Communities for Change has been agitating against automation in trucking and driving, for instance. In February, the group launched a campaign targeting Elaine Chao and the Department of Transportation, which has billions of dollars set aside to subsidize the development and spread of autonomous vehicles.

“Many truckers are very fearful,” says Zachary Lerner, the group’s Senior Director of Labor Organizing, who has been organizing drivers against the driverless vehicles. “Trucking is not the best job but it pays the most in lots of rural communities. They worry: are they going to support their families? And what will happen to all of the small towns built off the trucking economy?”

“Our demand is to freeze all the subsidies for the research on autonomous vehicle until there is a plan for workers who are going to lose their jobs,” Lerner says.

As part of this effort, NYCC regularly puts together conference calls between dozens of taxi , Uber, and Lyft drivers. They discuss how they’ve all gotten massive loans to get the cars for Uber and how they are still going to being paying off these loans when the robots come for their jobs – the robot vehicles Uber has promised within the decade.

There has also been a smattering of other workers actions against automation: last year, 4,800 nurses at five Minnesota hospitals protested against a computer determining staffing choices as well as broader healthcare questions.

And then there’s Bill Gates’s fix: to have governments tax companies that use robots to raise alternative funds. These funds would in turn help displaced human workers train for irreplaceably human jobs and to perhaps lull the swift turn to automation. In early 2017, the business press attacked him, partly for hypocrisy. As DailyWire wrote, “Bill Gates Proposes One Of The Dumbest Ideas Ever To
Fix The Economy.” But what is so wrong with Gates’ idea? He was at least trying to address the way that humans may be pushed out of the workforce by robots’ metal hands (and their owners’ hands within them).

His solution is echoed by thinkers like Martin Ford, the “futurist” author of 2015 book Rise of The Robots. Ford eschews the Luddite perspective, and sees his very own book’s title as a sign of progress. Nevertheless, he tells me that for our society to remain equitable; we must “leverage that progress on behalf of everyone”. That means, for Ford, that “if businesses use automation and get higher profits as a result we then need do something about inequality,” by taxing the capital and profits rather than labor. Which is a lot easier than taxing robots, explains Ford, because “who is going to come in and figure out what to tax: is software a robot, for example?“

In addition, there are those who see Universal Basic Income (UBI) as the panacea to the cyborg revolution. When I spoke with UBI advocate Scott Santens, he wasn’t critical of automated trucking or robotic nurses. Rather, he believes that due to them, will all need to be subsidized by a monthly basic income guarantee if we are to survive with any standard of living intact.

I think we should go further. Why not stand up for the values of humanity more directly? Why not ask why anything that will eject millions more human beings from their work is indeed “progress”?

More than a century ago, the German Romantic writer ETA Hoffman wrote, in his story “Automata”: “Yet the coldest and most unfeeling executant will always be far in advance of the most perfect machines.”

This warmth and feeling must be honored, at the very least. If we don’t at least try to make the future more equitable, most of us will be left with simply scraps.