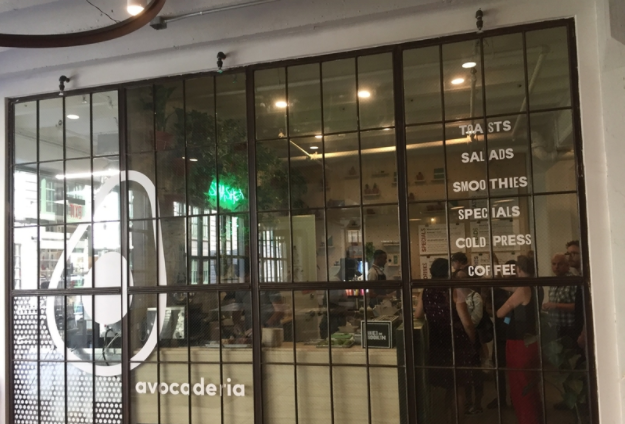 Avocaderia in the food court at Industry City in Sunset Park. Photo by Alex Vickers
Cities

Does This Avocado Toast Come With A Side of Gentrification?

Every era has its food craze. There was fro-yo, juicing and now, avocado toast.

Earlier this year, Avocaderia opened in the food court at Industry City, a sprawling manufacturing complex on the waterfront in Sunset Park in Brooklyn. It claims to be the world’s “first avocado bar” and offers five kinds of avocado toast, plus smoothies and salads. Francesco Brachetti, who co-owns the restaurant, is Italian. He said he got into avocados when he spent several years living in Mexico.

“What we wanted to create here is fast food for healthy and conscious consumers,” he said. “Avocado is in every dish. Healthy and tasty.”

And so far, Avocaderia has grabbed headlines, attracted fans and generated criticism.

“We’ve got two Italian guys who ‘discovered’ avocados in Mexico, just like they discovered my ancestors, in a community that’s largely Latino,” said Elizabeth Yeampierre, the executive director of the advocacy group UPROSE. Her group has been leading protests of Industry City, which she said is driving up rents in the neighborhood and driving out longtime residents.

In 2013, new owners led by developers Jamestown and Belvedere Capital — the same partners behind the overhaul of Chelsea Market in Manhattan — took over the six million square foot complex and kicked off massive renovations

Since then, rents in the neighborhood have increased 13.7 percent, according to Jonathan Miller, president of the appraisal firm Miller Samuel. Local housing advocates say, in a neighborhood where people have always struggled to afford their apartments, it’s getting harder.

“What we’re doing here at Industry City is taking a place that had very few jobs that was decrepit for 50 years and bringing it back to life with good-paying jobs that bring people up the economic ladder,” said CEO Andrew Kimball.

Hundreds of new businesses have moved in, from manufacturing to media to design. Industry City says over 6,500 people work there now, more than triple the number of employees when redevelopment began four years ago.

And Kimball said many of those jobs are going to local residents: The developers also built an employment center on-site. The so-called “Innovation Lab” partners with local nonprofits to offer free classes in coding, ESL, and business development. It also helps with job placement. “Developing ties to the community and pathways to jobs isn’t just community relations, it’s smart business,” Kimball said. “If we can find people who are walking or biking to work they’re more likely to stay in that job.”

Vegan chef and Sunset Park resident Daniel Lima had been out of work for three months when he got his job at Avocaderia. “It’s a great experience, close to home,” he said. “I’ve always been working in the city taking the subway, spending a lot of time on it. [Now] I have plenty time to enjoy with my wife and kids.”

But Lima said it is getting harder for his neighbors to afford their homes. He believes Industry City is part of that, but it’s also because people who’ve been priced out of other neighborhoods are moving to Sunset Park.

“The rents are getting high, no doubt about it,” he said. “A lot of people are moving away, new people coming in.”

Critics accuse Industry City of catering to that new demographic, people who can pay as much as $9.95 for avocado toast, at the expense of people who’ve lived here for years. Others say it’s a question of scale: can the complex employ enough people from the neighborhood, in jobs that pay well, so they can hang on to their homes?

Brachetti rejected the idea that the avocado bar is contributing to gentrification. He said that’s an issue of scale, too.

“We have a 500-square-feet kiosk inside a millions-of-square-feet building,” he said. “We are glad people think we have that much value but our dimension is really not enough to gentrify a neighborhood.”

He’s also trying to afford the neighborhood. He recently moved to Sunset Park, to an apartment he shares with roommates.