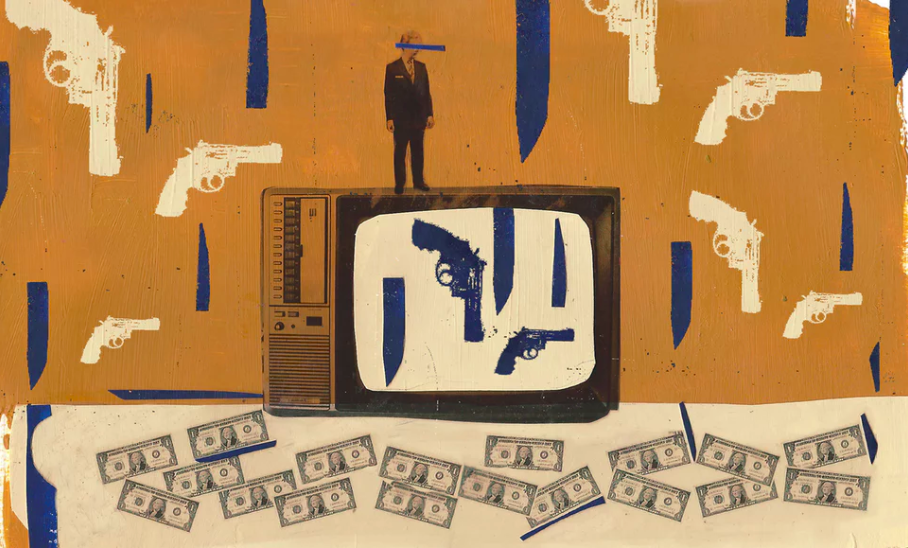 The new bad guys on TV: ‘Their crimes reflect the reality of income inequality’. Illustration by Rosie Roberts
Culture

On the new Netflix show Ozark, financial adviser Marty Byrde (Jason Bateman) is forced to launder millions of dollars in a rural red state, under threat of death from a Mexican drug cartel. In Billions, which finished its second season in May, viewers are meant to envy and respect mega–hedge-funder “Axe” (Damian Lewis), despite his evident criminality. And then there is the wildly popular Empire, about a hip-hop dynasty ruled by the ridiculously wealthy and brutal Lyon family.

Welcome to the new aspirational television, about a 1% that lives with impunity. These series center on brilliant, albeit extremely violent entrepreneurs. Our antiheroes have technical specialties they managed to turn into criminal know-how: on Ozark, money management becomes money laundering, and on Breaking Bad, high-school chemistry instruction becomes meth production.

These shows subtly argue that their protagonists have been forced to become criminals to avoid falling out of the upper-middle class. They are, after all, self-made: there aren’t even rich grandparents or parents to bail them out. And while these series are far from real, they do rest on the bedrock American reality of income inequality – the huge gap between the Axes of the world, or even the Marty Byrdes, and the “little people”.

“There is never a moment that the characters in Ozark relax about money,” Martín Zimmerman, Ozark’s executive story editor, tells me. “The reason for this is there is no social safety net in the US: once you have achieved any economic stability in this country, you live forever with a fear of falling out of it. In the show, the Byrdes can never exorcise the demon of starting out without money.”

As Zimmerman tells it, the theme of economic inequality was indeed constantly on the writers’ minds as they crafted Ozark. Though we meet him after he’s been threatened by the Mexican cartel, Byrde began working for that crime syndicate in order to maintain his family’s plush life, after his wife stayed home with the children and couldn’t get back into the workforce. This all seems a far-fetched plot point until one realizes that in truth middle class life is 30% more expensive than it was 20 years ago.

On Ozark, a rustic underclass family, the Langmores, interact frequently with the upscale on-the-lam Byrdes. Their meeting across the class divide was very important to the show’s themes, says Zimmerman. In addition, he and others scripted Marty’s wife on the show, Wendy (Laura Linney), so that she “came from a very working-class background in North Carolina”.

In Ozark, the truism that we are not as likely to do as well as our parents did in the past is front and center. The family at the show’s core “is striving not to feel unstable: they are fleeing from fear”, says Zimmerman. After all, they have plenty to start with. “They have enough money to cobble together $8m in assets to give back to the cartel while still driving a 10-year-old Camry with cloth seats,” Zimmerman adds.

This itself is aspirational for viewers who are not wealthy: even though he’s running from a murderous cartel, Byrde’s life is somehow still desirable. After all, the average top 1% family now earns 40 times what the average family in the bottom 90% earns.

The desperation with which Walter White, from Breaking Bad, Marty Byrde, and even Lucious Lyon strive to stay in the 1% or even the 5% reflects a reality principle: Americans born in the 1940s had a 90% chance of doing better economically than their parents did, but those born in the 1980s have only 50-50 odds.

There are, however, plenty of reasons for today’s antiheroes that have little to do with America’s cruel sociology. These callous binge-TV aspirants also emerged owing to trends in television production.

As Michael Z Newman and Elana Levine write in Legitimating Television, TV was originally considered a “feminine” medium, laden with ads for housework products and focused on the domestic. They argue the medium attempted to become culturally legitimate by going “masculine”, emphasizing damaged antiheroes who spend season after season doing battle with other men.

But television showrunners likening themselves to novelists, or likening a TV “writers’ room” to, say, a literary salon, doesn’t explain fully why Billions and Empire are so popular and why Ozark has been quickly renewed for a second season.

Christina Wayne, the gifted former head of programming at AMC in the era of Breaking Bad, thinks her show’s popularity had a lot to do with the recession of 2008. The show started that year but took off in 2009, at the trough of the downturn. “That was when people saw what the finance class had done to America, that the people on Wall Street were getting richer and richer,” says Wayne. “They wanted to see their heroes getting back at these people.”

In doing so, these characters may indeed be going beyond good and evil: they rob and fleece “rednecks” and “thugs”, and they then go after people who are even wealthier than they are – drug dealers, rival hedge-fund managers, et al. Ozark and the other shows, like Breaking Bad, are also revenge fantasies, says Wayne. Our series’ antiheroes may be wealthy, but they enact vendettas against the ultra-rich. In this way, they are still part of the struggling, resentful middle class too – like their audience.

Now, you may be thinking: oh, you are taking these shows too seriously, you’ve binged once too often. (And this sure as hell is the case!) Or maybe you’re thinking: what about Dallas or Falcon Crest? (The reply to that quibble is easy: the dastardly rich of those shows would never be mistaken for today’s affluent antiheroes; those families were long-running dynasties, and financial ruin never reared its head.)

Nevertheless, we root for the 1% or 5% strongmen. We don’t yearn for their downfall and then click off the remote or close the iPad screen once we realize that they are actually going to win, because we want to identify with those more privileged than us. We want to watch those people acting out and tearing the social fabric apart. Taking those liberties and being able to engage in criminal activity without punishment is, in a sense, the final privilege.

Just ask the immensely wealthy man who is now our president and appears to say and do exactly what he wants to
, regardless of the consequences: today, the ultimate luxury isn’t wealth itself. It is the ability to live unmoored from social norms, like the gods.