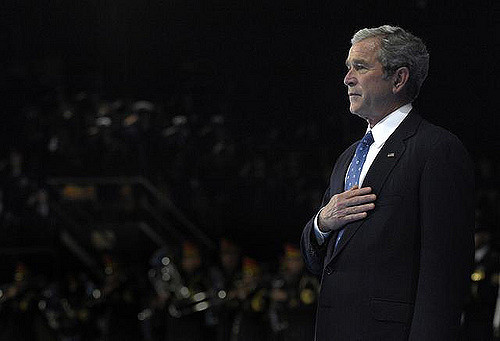 George W. Bush is Not the Resistance

Jenna Bush Hager and Barbara Bush are preparing to hit the road this week, promoting the launch of their new book, “Sisters First.” The book’s early press, and even its slim content, deliver a soft-focus homage to their father. George W. Bush’s star is on the rise, his favorability ratings the highest since he left office. Americans are now reminiscing about Bush in glowing terms, after his big, recent speech on democracy, swiping at President Trump, and the joke he cracked to Barack Obama at a post-presidential fundraiser for hurricane relief. Even Howard Wolfson, former spokesman to Hillary Clinton and a top aide to Michael R. Bloomberg, posted a picture on Instagram of himself embracing W. in New York. Caption: “Admit it. You miss him.”

A newfound love for Bush springs from a growing distaste for the current occupant of the Oval Office. And the comparison that many progressives and establishment Republicans itch to draw between Bush and Trump makes the Texan seem like Lincoln. But a more careful look at Trump and Bush’s records shouldn’t elevate Bush; it should remind us that the two presidents have more in common than they care publicly to admit.

For starters, just think about tax cuts for the extremely wealthy, suppressing the black vote and Bush’s penchant for denigrating facts and expertise. Our country’s historical amnesia be damned; the roots of Trump’s reactionary agenda were planted in W.’s West Wing.

[George W. Bush was not a good president. As a former president, he’s been exemplary.]

I visited Bush’s White House at the gloaming of his presidency, on May 29, 2008, to interview his chief political strategist, Ed Gillespie, now a candidate for governor of Virginia. Gillespie had been hired to rid the Bush legacy of Karl Rove’s political stench (CIA leaks, fired prosecutors, Jack Abramoff, “deleted” Bush White House emails and so forth). On that bright Wednesday morning, USA Today ran front-page coverage of Scott McClellan, Bush’s former friend and White House press secretary, delivering the “harshest criticism to date from a Bush insider.”

“Because of my position and my affection for the president and my belief and trust in he and his advisers, I gave them the benefit of the doubt,” McClellan said. “And looking back on it and reflecting on it now, I don’t think I should have.” McClellan faulted the Bush administration for never having shifted from campaign mode to governing mode, a failure that “almost guaranteed that the use of force would become the only feasible option [in Iraq]. In the permanent campaign era, it was all about manipulating sources of public opinion to the president’s advantage.”

So it is a touch ironic that Bush’s recent smackdown of Trump insisted that “our politics seems more vulnerable to conspiracy theories and outright fabrication.” In his recent speech, Bush claimed that bigotry “is blasphemy against the American creed,” referring to Trump’s politics. But Bush’s own Svengali, Rove, was simply more sophisticated and soft-spoken in his bigotry than Trump’s past and present cabal, Stephen K. Bannon, Stephen Miller and Sebastian Gorka.

In Bush’s post-presidential glow, it’s easy to forget that he and Rove were the crown princes of wedge issues. Having championed a historically unprecedented move to change the Constitution to bar same-sex couples from marrying, Bush and Rove then helped get 11 initiatives to ban same-sex marriage on state ballots in November 2004, the better to draw conservatives to the polls to support his reelection.

[How do you get rid of Trump? An election, not the 25th Amendment.]

While drawing conservatives to the polls, Bush, Rove and Gillespie worked diligently with Republican state legislators to put voter-restriction laws on the books, the better to keep blacks and college students away. Despite no worthy evidence of voting fraud in 2000 or 2002, John Ashcroft, Bush’s attorney general, put the issue at the top of the Justice Department’s agenda. After federal prosecutors came up with nothing for years, Bush’s White House became defensive and aggressive. In an unprecedented move, Bush had his attorney general fire seven U.S. attorneys. Ultimately, the Department of Justice’s own inspector general concluded that some of the dismissals were motivated by the fired prosecutors’ refusal to go after trumped-up voter fraud cases.

And as Trump sells his tax plan, the country should beware of deja vu. Bush’s tax cuts in 2001 and 2003 delivered the top 1 percent of earners an average tax break of more than $570,000 between 2004 and 2012. Bush b
oosted that top 1 percent’s already high after-tax income by more than 5 percent each year. To what end?  Even Bush’s chief economist on the Council of Economic Advisers, looking at the results from 2001 to 2007, found “no first-order evidence in the aggregate data that these tax cuts generated growth.” Despite Bush and Rove’s promises, the tax cuts did not demonstrably improve economic growth nor pay for themselves.

Just as they flouted sound economics, Bush administration officials espoused an anti-intellectual stance, quite eager to disparage experts and information-gathering and dispute settled facts. It was Bush and Rove who demonized climate scientists, reproductive health specialists, stem-cell researchers and Middle East experts. Referring to the war in Iraq, a top Bush aide once mocked “the reality-based community,” a code for those who dare criticized Bush’s policies — gasp! — based on facts. Bush dishonestly teed up the anti-intellectual, anti-elitist rage that became the emotional touchstone of Trumpism.

Admittedly, Bush is more of a free-trade globalist in principle than Trump. As wealthy, coastal elites in good standing with the Republican establishment, the Bush family personifies what the Trump base hates. But those contrasts are smoke and mirrors. There’s very little lifestyle or ideological difference between the Bush clan and core members of the Trump administration: Jared Kushner, Steven Mnuchin, Gary Cohn, Rex Tillerson or Betsy DeVos (whose brother, Erik Prince, founded Blackwater, the military contracting outfit the Bush administration turned to so often in Iraq and Afghanistan).

The brewing Bush nostalgia helps the public forget how Bush helped make Trump possible in the first place, even as he now wants to distance himself from Trump (and vice versa). Americans may like to forget history. But this year is showing us in real time that we are, indeed, doomed to repeat it.

Rich Benjamin is author of “Searching for Whitopia: An Improbable Journey to the Heart of White America” and contributing editor of the Economic Hardship Reporting Project.