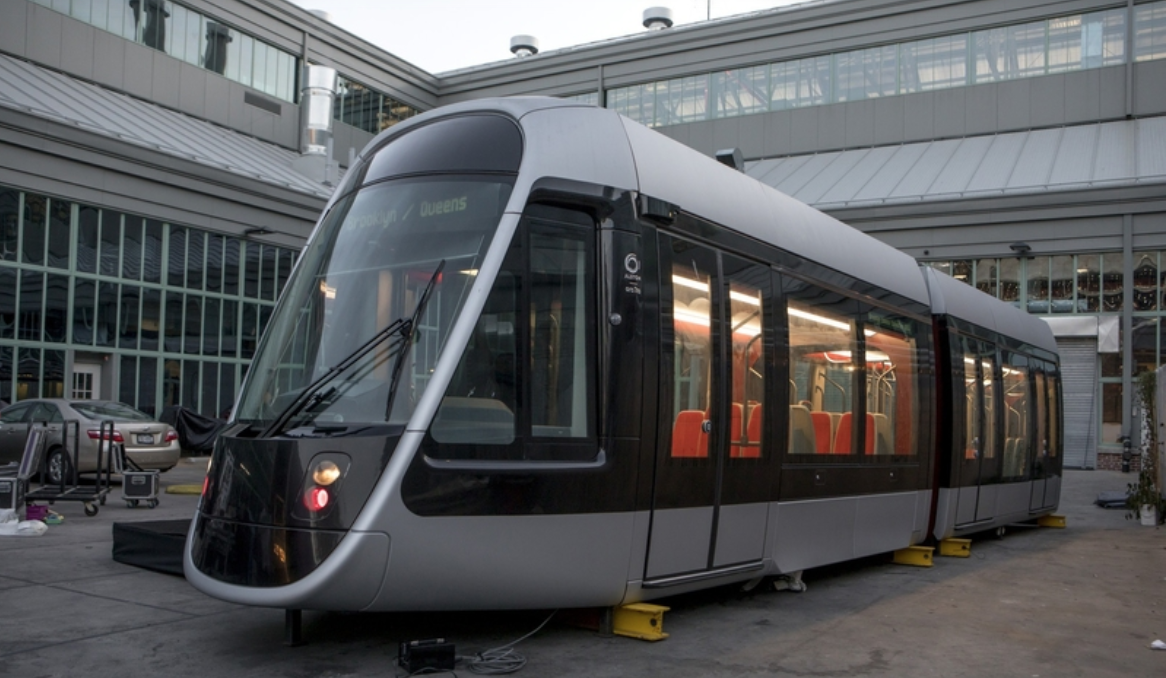 The advocacy group "Friends of the BQX" unveiled a model of the new streetcar. Photo by Gerri Hernandez
Cities

Right of Way: The Battle Over the BQX

Getting by in New York City is also about getting around and for many residents moving between Brooklyn and Queens is tough. The de Blasio administration says it wants to help by building a new streetcar to run along the waterfront from Astoria in Queens to Sunset Park in Brooklyn.

But the project, known as the Brooklyn Queens Connector or BQX, is also dividing some of the people who live in those neighborhoods. As the city moves forward with the light rail system, both sides are ramping up their campaigns for and against it.

On November 13th, the advocacy group Friends of the BQX unveiled a life-sized model of the streetcar. One person who liked what she saw was Claudia Coger, president of the Astoria Houses Tenant Association in Queens.

“It’s like a dream come true,” said Coger. She said it takes her 20 minutes to walk to the subway and it took her kids over an hour to get to school in Brooklyn. She added that wheelchair-bound seniors have trouble getting around at all and that a streetcar with curbside boarding would help.

“Living without easier access to transit means our residents have to struggle more for the opportunities that are provided to so many others,” she said.

When Mayor Bill de Blasio announced the project last year, he said the BQX would serve more than 400,000 residents, connect them to new jobs along the rapidly-developing waterfront, and generate $25 billion in economic activity. Furthermore, he said the $2.5 billion streetcar would pay for itself through what’s known as value capture.

The idea is that property values — and property taxes — will increase along the route, and the city would then use that additional revenue to pay for the project. It’s similar to what Mayor Bloomberg did to pay for the extension of the 7 train to Hudson Yards. In that instance, however, property taxes didn’t cover all the costs, and a memo that leaked out of City Hall this spring raised similar questions about whether the financing plan for the BQX would work.

Meanwhile, some residents in the neighborhoods where the BQX will operate said the city is literally banking on gentrification. “It’s going to raise taxes and it’s going to raise rents in an area that’s been somewhat affordable for folks,” said tenant activist Nehemiah Bey who lives in Sunset Park. Bey said if the city wants to improve transportation, it should fix the subway and add buses. He believes the people who really stand to gain are developers with properties along the route. “What they’re doing is creating a way to get to their businesses,” he said.

Many prominent developers are backers of the BQX and major political donors. Jed Walentas, CEO of Two Trees, is chairman of the “Friends of the BQX,” and has been a top contributor to the mayor. The BQX would connect his properties in Dumbo and Williamsburg. Both City Hall and Two Trees said the contributions have nothing to do with the project. In a statement, a spokesperson for the mayor said political donations have zero impact on the administration’s policy decisions. A spokesperson for Two Trees said the idea that contributions are driving the project is “ridiculous” and added, “We were never solicited nor made a single contribution related to or because of the BQX, and there is no evidence to suggest otherwise.”

Officials and advocates for the rail line emphasize the BQX is about connecting people who need public transit. While improving subways and buses requires working with the MTA and in some instances, tangling with the state, the city can move forward with the streetcar on its own.

And it is: Service is scheduled to be up and running in 2024.