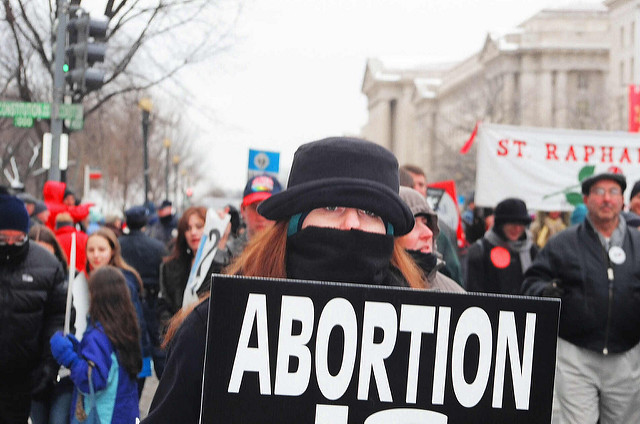 Let’s Call the Pro-Lifers What They Are: Pro-Death

Ever since the anti-abortion movement claimed the “pro-life” label in the 1970s, the battle over reproductive rights has taken an apocalyptic tone. If the anti-abortion side is pro-life, then the other side – the millions of women who rally every January to keep abortion legal and safe – must be composed of the gaunt, gray-winged handmaidens of death.

This polarizing rhetoric turns every clash between the two sides into a prelude to Armageddon, the final showdown between life and death, good and evil. When charged with caring only for life in its fetal form, the anti-abortion side hoists its mythological claim that abortion is a risk factor for breast cancer, lifelong depression and suicide. Thus they can say that they do not only save fetal lives, but the lives of the women who carry these fetuses.

On 22 January, on the 45th anniversary of the legalization of abortion, supporters of women’s rights need to go beyond refuting false claims about the dangers of abortion.

We should take back the mantle of life.

There is mounting evidence that it is not abortion, but the lack of access to abortion that is a deadly threat to women. This conclusion comes from careful state-by-state monitoring of maternal mortality, including deaths occurring at birth and around the time of birth. The less access to abortion, the greater the chance that women will die in childbirth or pregnancy.

Maternal mortality has long been considered a third world problem, almost unthinkable in a society, like ours, that spends $3.3tn a year on healthcare. So it was shocking, in the late 2000s, when public health researchers began to see an uptick in US maternal mortality, and to some even more shocking that the excess deaths were concentrated in the states imposing the highest number of restrictions on access to abortion.

Texas, for example, saw its maternal mortality rate more than double between 2010 and 2014, as the state closed more than half of its abortion clinics and severely cut funding for Planned Parenthood. Thanks to Texas and a few other states with strong “pro-life” lobbies, mostly in the south, the US now bears the ghastly distinction of having the highest maternal mortality rate of all the world’s wealthy democracies.

What does the presence or absence of abortion services have to do with the chances of a woman’s surviving pregnancy and childbirth? No one knows exactly what’s going on, but most people seem to agree that the relationship is indirect: states that make abortions hard to get also tend to be stingy about health services like prenatal and postnatal care, hence less likely to catch the escalating blood pressure or anomalous bleeding that can presage a woman’s death.

Experts on reproductive health, like Terri-Ann Thompson of IBIS Reproductive Health, a nonprofit research organization, conclude that access to abortion is a measure of a state’s commitment to women’s – and children’s – health in general.

Sometimes, though, the relationship between lack of access to abortion and maternal death is much more direct.

Take the not-at-all-hypothetical case of a woman who wants an abortion because of a pre-existing health condition, like diabetes, that could lead to problems with pregnancy, but is unable to find one. Or, as Thompson points out, to find one in time, because most states ban abortions before a specified time in the pregnancy – around 18 to 20 weeks. It can take time to assemble the funds for an abortion, say from a payday loan, or to arrange for transportation to a clinic that may be hundreds of miles away.

When the outcome is tragic, it is fair to say that the lack of abortion caused the woman’s death. But we won’t know for sure until each case of maternal mortality is scrutinized with the forensic zeal of a homicide investigation.

Also in urgent need of investigation is the fact that America’s maternal mortality crisis is disproportionately concentrated among black women, and not just because black women tend to be poorer than women of other races.

ProPublica reported in December 2017 that “black mothers who are college-educated fare worse than women of all other races who never finished high school … And black women in the wealthiest neighborhoods do worse than white, Hispanic and Asian mothers in the poorest ones.”

One conjecture is that the stress of experiencing racism, in hospitals as well as in the general society, can fatally compromise women’s health. Patrisse Cullors, a founder of Black Lives Matter, says the issue is very much on their radar, as a matter of “reproductive justice”.

Now imagine, just as a thought experiment, that the overall findings were reversed, and that access to abortion was correlated with increased maternal mortality.

The FBI would be investigating. Photos of the dead mothers would be displayed at high-profile prayer breakfasts in Washington. Republican elected officials would be demanding the immediate closure of all abortion clinics and perhaps the razing of the buildings that housed them to prevent any lingering contamination.

But the actual findings haven’t had much public impact at all, at least not so far. The anti-choice movement refuses to take responsibility for rising maternal mortality.

When we called the press office of National Right to Life, the person who picked up the phone told us that the increase in maternal mortality was due, not to a lack of access to abortion, but to inadequate health services for women, and promised that someone who was more familiar with the subject would call back. No one did. But we would still be left with the question: didn’t the anti-choice people have a moral responsibility to check on the availability of health services for pregnant and postpartum women before savagely restricting abortion?

Maybe we need to assemble a body count of the women who have died because they couldn’t get an abortion, complete with photos of them, their grieving families, and orphaned children. Maybe we should be reading their names aloud at every pro-choice gathering.

And surely the time has come to raise the charge that the “pro-life” movement is, in effect, pro-death.