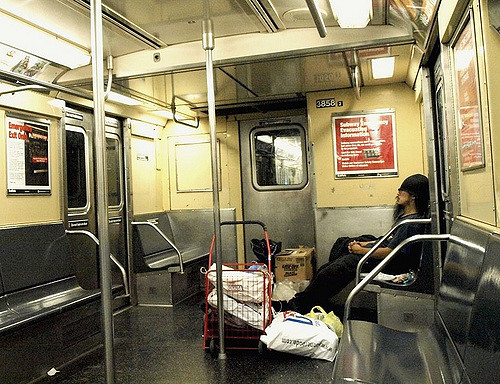 As we make our way through the coldest days of winter, it’s hard not to notice people without homes, freezing on street corners or sleeping in subway cars. The problems are clear: There are many homeless people in big cities like New York and Los Angeles, and there is still not a constitutional right to housing, no guarantee even of a bed in a shelter.

That’s why nonprofits across the country have opened “warming centers” to temporarily house some of these people, so that they don’t freeze to death. This idea is critical and certainly well-meaning. But solutions like this are part of something bigger and stranger that I call the dystopian social net. That’s the set of private, philanthropic and even entrepreneurial solutions to social problems that shouldn’t exist in the first place, problems our government should be fixing.

It seems that while our actual state falls into disrepair, we are creating a shadow one. The dystopian social safety net alleviates pain and suffering, so it is necessary in the short term. But the roots of the pain and suffering need to be addressed, and when there are shortcomings (as there will be), the government should be the safety net, not only civil society.

Consider our broken bail system. On any given day, some 450,000 Americans languish in jails without being convicted of a crime. A great majority of them simply can’t pay bail. Nonprofits like the Bronx Freedom Fund and the Bail Project have emerged to address this problem. These initiatives offer to pay bond for some of the poor people charged with crimes. Their work is fundamental. Just one night in jail can cause a person to lose his or her job, home or even custody of children.

Another inventive fix is the free repair clinics for brake lights now run by several local chapters of the Democratic Socialists of America. These chapters have been conducting these clinics because broken car lights are one of the main reasons police stop undocumented immigrants and people of color, and give them tickets — police encounters that can lead to brutality or even death.

But these programs, though wonderful and needed, shouldn’t have to exist in the first place. Of course, they should be praised and supported. But they should also be understood for what they are: temporary palliatives that we should not accept as long-term solutions. Changes in policing tactics are indeed the key.

Yet the repair clinics and bail funds and the broader shadow social net must exist because the world we exist in can seem dangerously close nowadays to a dystopia. As a character says in “Children of Men,” a science fiction novel and film about a future of worldwide infertility where a few hardy souls try to save the human race on their own: “I can’t really remember when I last had any hope and I certainly can’t remember when anyone else did either.” It can seem as if America is a ship and we are stuffing rags into its hull, but the view from steerage is that this ship is going down.

To be transparent, I run a nonprofit that supports journalists reporting on inequality. I believe that the hard work and good intentions of many nonprofit organizations are saving America’s soul. Some of our group’s reporters might stay on welfare or food stamps if we didn’t underwrite their efforts, given the diminished status of news gathering today. Our organization shouldn’t need to exist. But it is very necessary.

As we embark on a new year, we should consider the tragedy of the dystopian social net and be thankful for its existence — for now.

Alissa Quart is the executive editor of the Economic Hardship Reporting Project and the author of the forthcoming book “Squeezed: Why Our Families Can’t Afford America.”