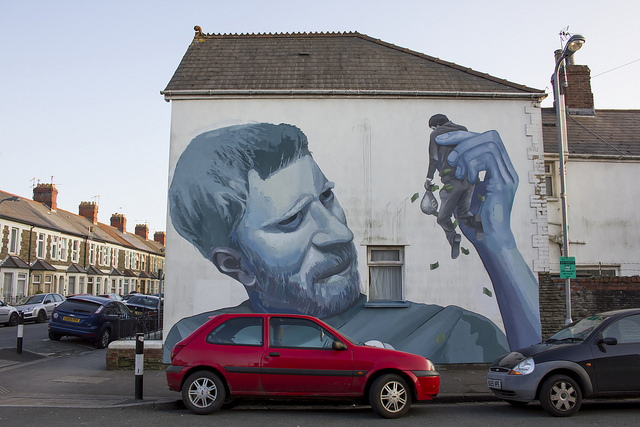 If Americans Don’t Like the Word ‘Inequality’, Would ‘Fairness’ Be Better?

Just in time for last week’s convening of the most powerful and elite in Davos, Oxfam released a disturbing report that 82% of wealth that generated last year went to the richest 1%. Meanwhile, one in five children in rich countries still live in poverty, according to Unicef.

Welcome to the sickeningly unequal distribution of wealth.

These are shameful signs of a society dangerously out of whack. Nevertheless, there’s a battle – and denial over – how we should describe this problem. In some quarters, the word “inequality” itself is rebuked as the culprit. Scholars have even studied why inequality as a concept sometimes fails to shock or even trouble people.

For instance, a Yale psychology paper called ‘Why people prefer unequal societies’ put it like this: “When fairness and equality clash, people prefer fair inequality over unfair equality.” What this means is that people are fine with inequality if they feel they have a chance to win, and if the system that creates it is “fair” in some way.

Among conservatives, it can even seem as if “inequality” has become the new “liberal”. Using the “I-word” to describe some of the striking and widening gaps between the richest and the poorest in America is rare in rightwing circles. As Mitt Romney put it disparagingly when he ran for president, inequality is “about envy. I think it’s about class warfare.”

Conservatives tend to reach for other terms. Bona fide right publications like the National Review prefer to talk about the need for equality of “opportunity” instead, as does Hillbilly It boy JD Vance. Conservative writer Kathryn Jean Lopez, in one essay for the magazine, chirruped that “being grateful for any and all opportunities may be the place to start”. Of course, words like “disparity” or “opportunity” emphasize access, while not getting at what is preventing that access – usually the lack of money or education, family or racial privilege.

Of course, the results and the rhetoric of the 2016 elections would indicate some Republicans are pretty angry about income inequality, although they don’t often acknowledge that it’s the cause for their pain. They certainly don’t want to call it by its name.

So how can we rebrand “inequality” so it gets talked about?

George Lakoff, a Berkeley cognitive science and linguistics professor, explained that “‘inequality’ has a problem because people aren’t equal.’” In other words, people are not the same and if we are opposing inequality, it would seem that we are arguing for its opposite, everyone being equal. This can sound great in the abstract but we each live out our lives bearing different strengths and weaknesses that are simply not always equivalent.

Lakoff went on to suggest strategies to spread the idea of inequality without mentioning the word, as a more effective way to talk about it with the public.Lakoff concluded that we should instead promote “fairness”.

In many of the states where Trump won in 2016, “the word ‘inequality’ itself doesn’t resonate,” Nobel Prize-winning economist Joseph Stiglitz told me. Instead, it might be better to do that basic writing class exercise: show, don’t tell. “You have to show people how disparity is undermining the functioning of the economy, how we all will suffer if we don’t have a labor force that is healthy, well-fed and well-educated,” says Stiglitz.

And then there’s the issue that some slivers of the public don’t even seem to mind the existence of inequality in the first place. Some even think that those who benefit from our unequal society are more deserving – they are actually harder workers. For instance, a Pew Research Center study found that since 2014, conservative attitudes toward both success and inequality have changed: the percentage of Republicans who believe a person is wealthy primarily due to Herculean labor had risen from 54% to 66%.

And again, some of the problem is simply branding or creating effective narratives around inequality. Progressives can lag behind their conservative brethren in the branding department. (What other good lingo have the left or the Democrats come up with recently, save for the “1% v the 99%” formula that came out of the Occupy movement?)

But if we believe, as I do, that inequality is the main issue of our time, we must try. For instance, we could better tie the notion of profits to ideas of earning and of fair distribution of pay for work, Lakoff says.

And perhaps there are other words that we might emphasize, instead of “inequality” or its not-quite-synonym, “fairness.” We could use more common-sense phrases to diagnose our broad-based societal ailment, like “fair share” or “honest pay.” We could also refer to our increasing lack of “security.” After all, “security” once meant safe and comfortable workplaces, long career tracks and safety nets that no longer exist. If that word doesn’t work, how about “stability”?

My colleague Barbara Ehrenreich told me that she reframes inequality in a different way. She turns it around, so it’s about the general public’s inability to “afford the rich, who drive up costs for everyone and require huge amounts of cash to sustain their lifestyles.”

No matter how we name and dissect inequality, we must keep explaining the larger downside of such concentrated extreme wealth. Stiglitz thinks that the best tack in hammering the problem of inequality home is to reveal to Americans that their “secure middle-class style of life is being pushed out of reach”.

Another strategy, Stiglitz suggests, is to tailor messages about inequality to different populations. Some parts of the electorate, like committed members of religious groups, for instance, may respond to a moral argument against economic disparity rather than, say, a political or an emotional or a practical one.

Today, some Americans’ understanding of inequality is
occluded by the image of the deserving, self-made member of the economic elite. This supposedly heroic, sweaty-browed entrepreneur bears a FitBit and his disruptions of the status quo leads to handsome – and deserving – rewards. But let’s push this mythic beast to the side.

What we need to do instead is to expose that beloved Trump word, “merit-based”, as being neither “stable” nor “fair”, and point out again and again how privilege is almost always already encoded in the first place for those who obtain such economic success.

And the next time that we hear words like “inequality” blotted out in our public discourse, we should start to reach for new language and frameworks to describe it. We will first need to use that other “i-word”: imagination.