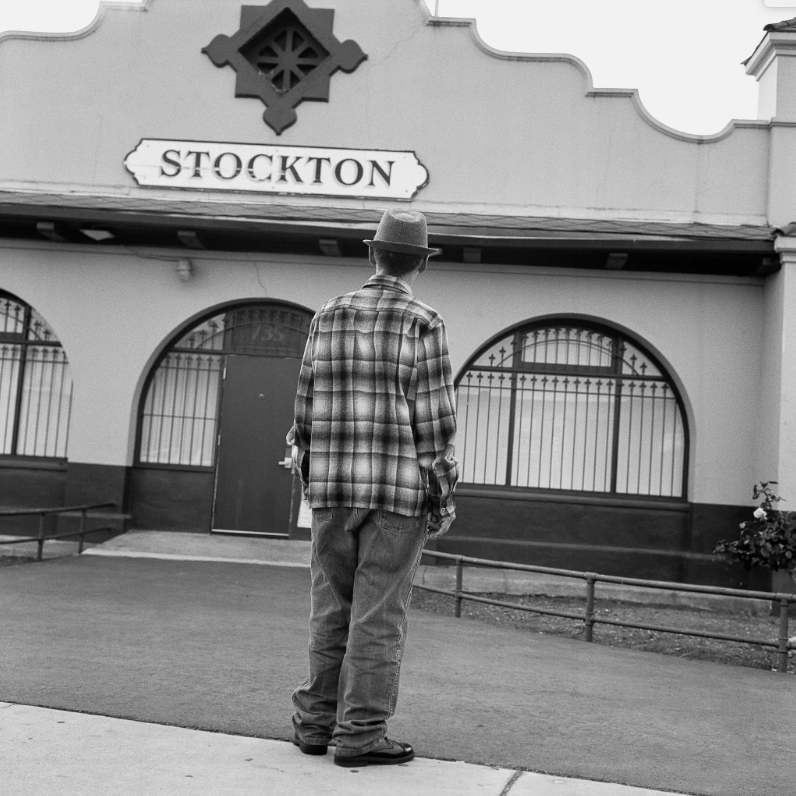 A man recently released from prison stopped to look at this old closed train station, where ex-offenders used to arrive after their release. Photo by Joseph Rodriguez for The New York Times
Criminal Justice

STOCKTON, Calif. — In California, known for decades as one of the nation’s most avid jailers, the trajectory of law and order is shifting. Through litigation, legislation and a series of ballot initiatives, the state’s prison population has dropped 25 percent over the past decade.

The photographer Joseph Rodriguez has been documenting crime and punishment in California for years and recently focused his gaze on the migration home, in Stockton — a barren outpost in California’s Central Valley. 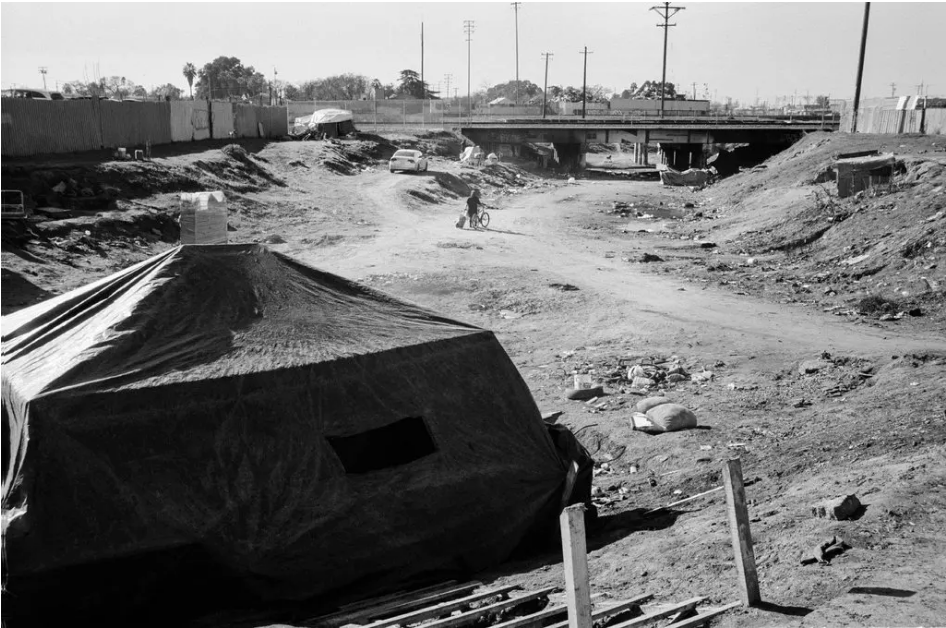 Many ex-felons without a familial support system wind up homeless. Some of them live in this encampment called the Trenches. Photo by Joseph Rodriguez for The New York Times

The roughly 600,000 men and women who leave incarceration nationwide each year are the long tail of the nation’s prison boom. Finding housing tops the list of challenges they face, followed by getting and keeping a job. These practical barriers are compounded by internal obstacles. Researchers report high rates of post-traumatic stress disorder, as well as histories of abuse and neglect among prisoners. These early wounds are compounded by the violence, humiliation and bone-deep isolation of the prison experience.

“It’s a lot of work to unravel the garbage I created,” said Jesse De La Cruz, who spent three decades in and out of California prisons. Former prisoners, he said, are expected to “change everything they’ve done all their lives in three months. It doesn’t work that way.” 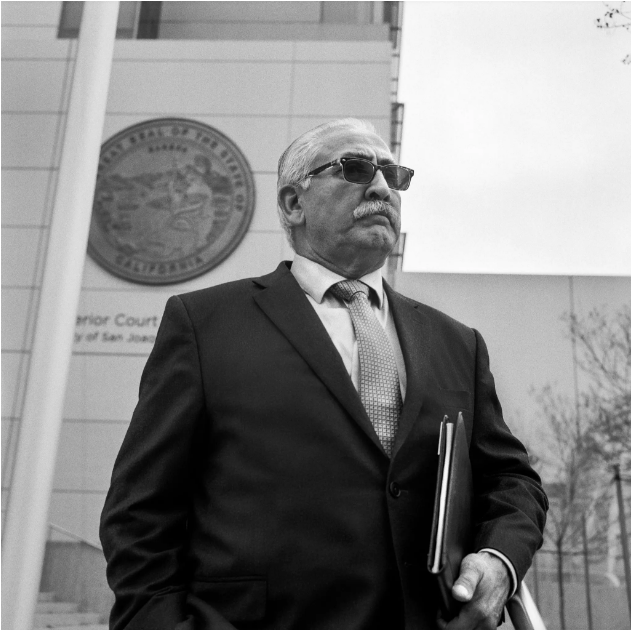 Jesse De La Cruz spent nearly three decades in and out of prison and now holds a doctorate in education. He has testified as an expert witness in hundreds of gang-related court cases and facilitates gang awareness workshops in schools. Photo by Joseph Rodriguez for The New York Times

David Eng was fortunate in this regard. He was sentenced to 17 years to life for second-degree murder for stabbing to death a man who he said had beaten and sexually assaulted his sister. After 28 years, he left prison with the support of a handful of family members and friends. A brother in Stockton offered him a place to stay. A year and half later, he has a car, a new wife and a job helping other returning prisoners get on their feet at Fathers and Families, a Stockton nonprofit.

Mr. Eng is part of a wave of newly released lifers pouring out of California’s prisons — nearly 4,500 since Gov. Jerry Brown took office in 2011, compared with a handful a decade earlier.

Mr. Eng, who had six parole board hearings before being approved to walk out, keeps a black binder documenting the effort to gain parole. Plastic sleeves protect certificates from the American Bible Academy, anger management classes and workshops on “pro-social values”; abstinence contracts; relapse prevention plans; a high school equivalency diploma; letters of apology; and letters of support. 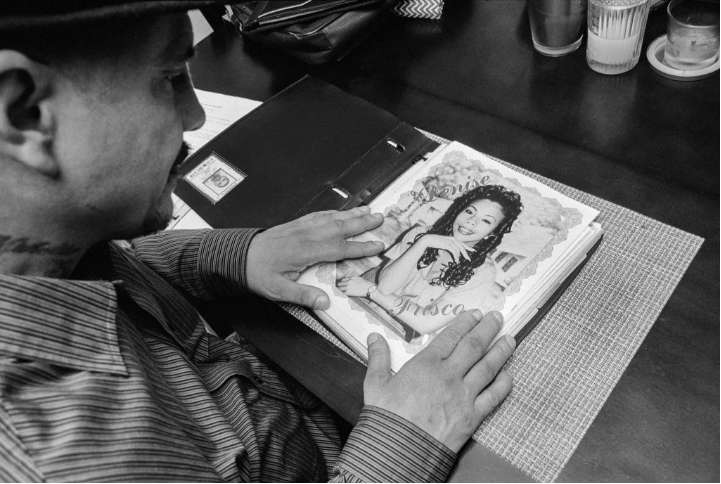 Mr. Eng with an old photo of his twin sister, Denise Eng. They were convicted for the same murder, and she is serving a life sentence. Photo by Joseph Rodriguez for The New York Times

Mr. Eng described a childhood marked by drugs and neglect. At 5 years old, he said, he witnessed his mother’s murder. This kind of early trauma is widespread behind bars, according to Daniel Silva, 60, who spent 39 years in California’s prison system. Mr. Silva was still locked up when he began to develop the curriculum for the Self-Awareness and Recovery program, which runs healing circles inside several California prisons. 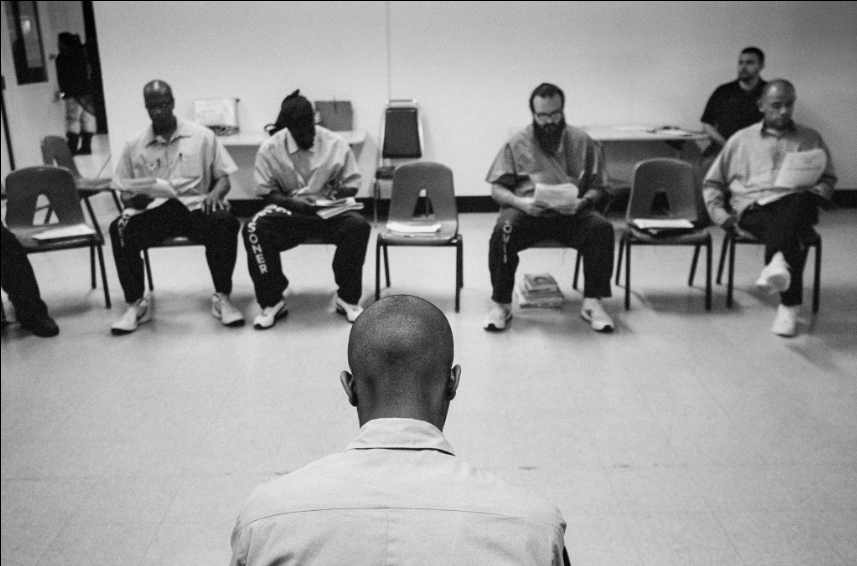 During a workshop called Self-Awareness and Recovery at the California Medical Facility, a state prison in Vacaville, inmates discuss the traumas that affected them as children and teenagers. The facility is designed to help meet the medical, psychiatric and dental health care needs of male felons serving long-term and life sentences. 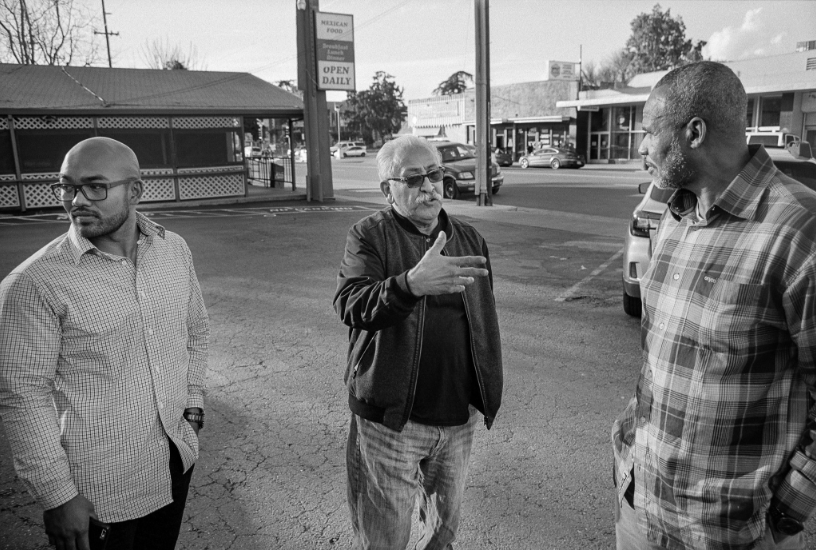 Jesse De La Cruz, center, was a teenager when he became addicted to heroin and joined street gangs in his Mexican-American barrio in California. This led him to spend three decades cycling in and out of California prisons. Mr. De La Cruz is now in his 22nd year of recovery, holds a doctorate in education and runs gang-awareness workshops in schools. He also has testified as an expert in hundreds of gang-related court cases nationwide. Here, he talks in a Stockton parking lot with lifers who had just been released from prison. 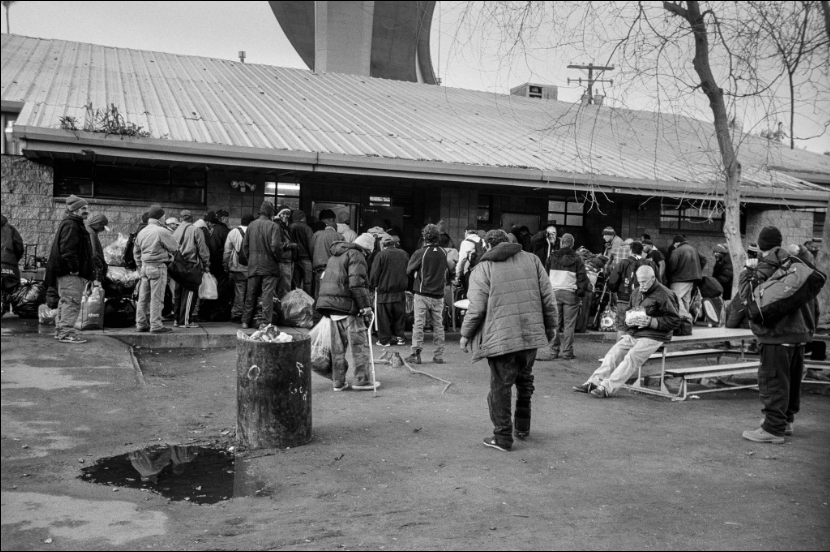 Men line up early to get a bed for the night at the Stockton Shelter for the Homeless. Prisoners who are unable to rely on family support often find themselves without housing upon their release. 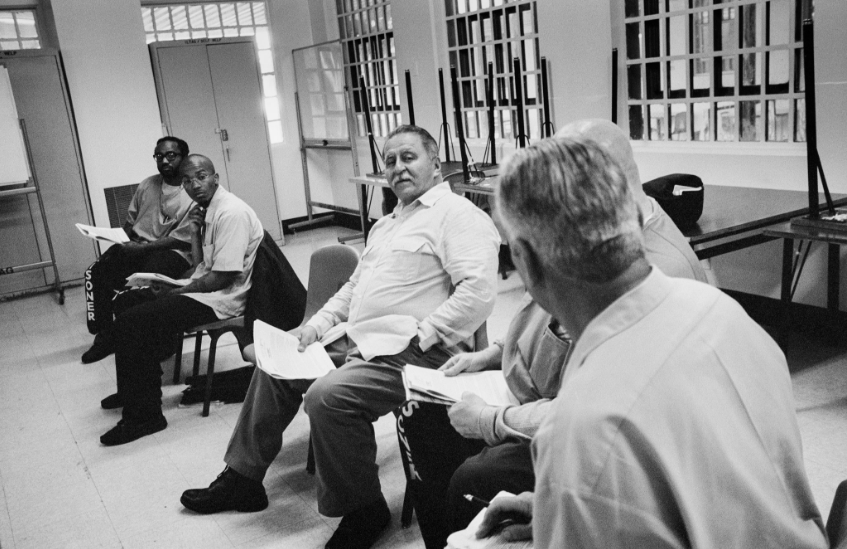 Daniel Silva, center, who spent 39 years in prison, leads a weekly workshop with the Anti-Recidivism Coalition at the California Medical Facility. Mr. Silva, 60, was released in 2015 and is now off parole. He developed the curriculum for the Self-Awareness and Recovery program while he was still in prison. 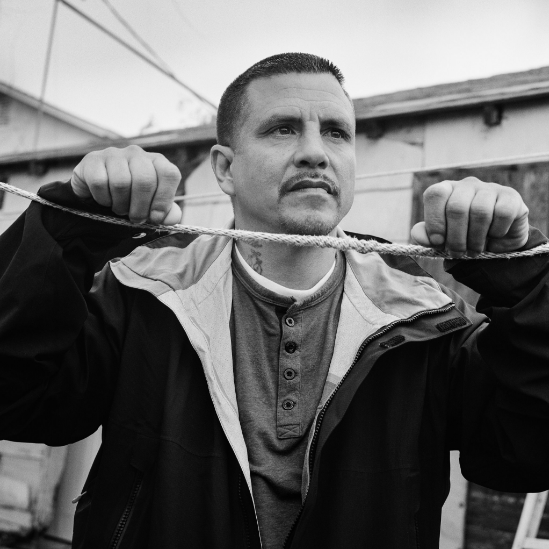 David Eng, 53, went through six parole board hearings before finally winning release. He was paroled in 2016 after serving 28 years for second-degree murder. His twin sister, Denise, was sentenced for the same murder and is still in prison. 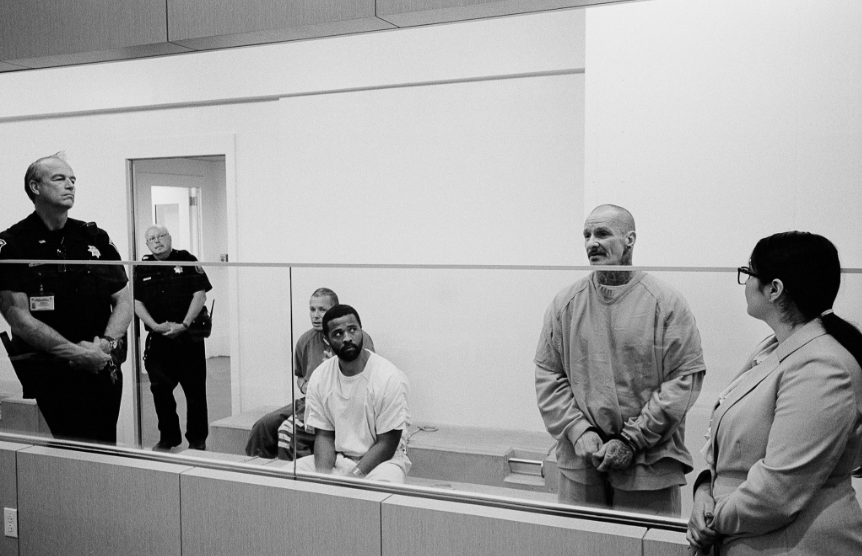 A parolee who has been re-arrested addresses a judge at the San Joaquin County Parole Re-entry Court in Stockton. 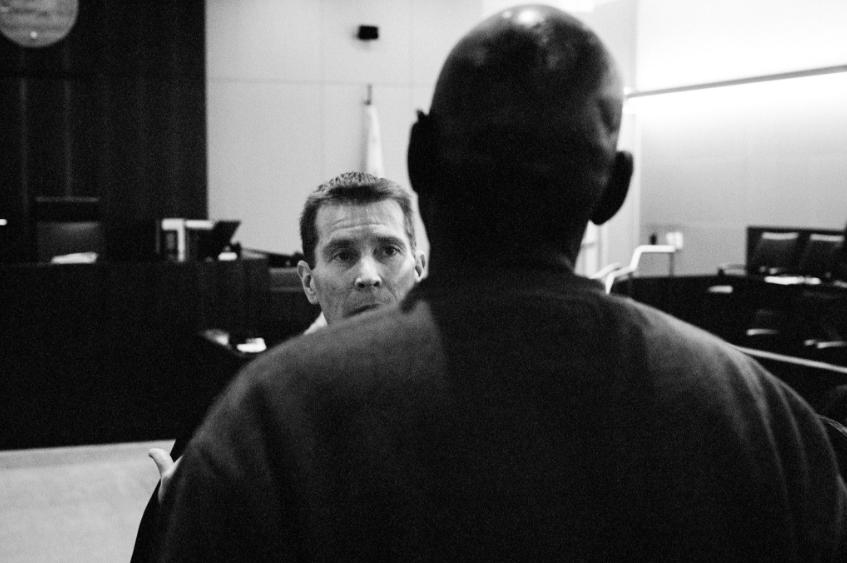 Judge Brett H. Morgan of the Parole Re-entry Court comes down off the bench to speak to a man on probation about his recovery. An important aspect of Judge Morgan’s work is to follow up with all offenders who go through his court. 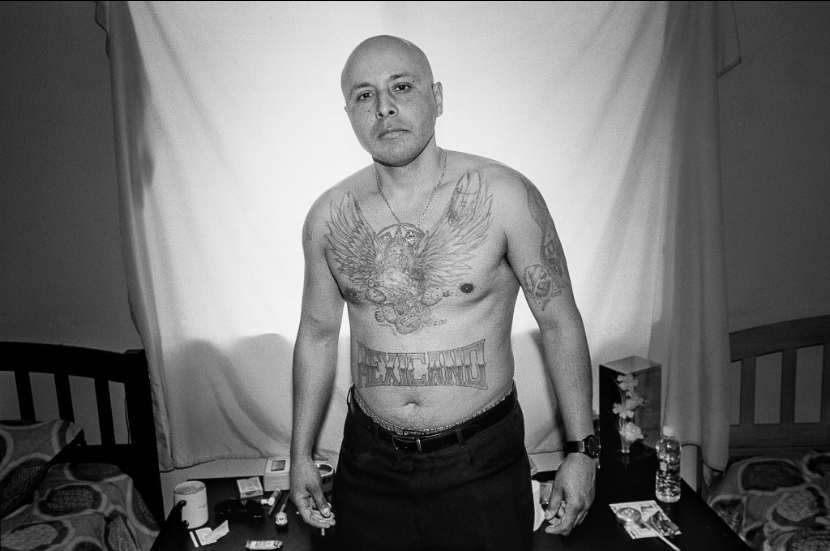 Henry Ortiz, 36, is an ex-gang member and a two striker who was paroled in November. When he was released, he did not have a Social Security number, a driver’s license or a place to live. Although he was originally from Stockton, the victim’s family denied his return there as a condition of his parole. 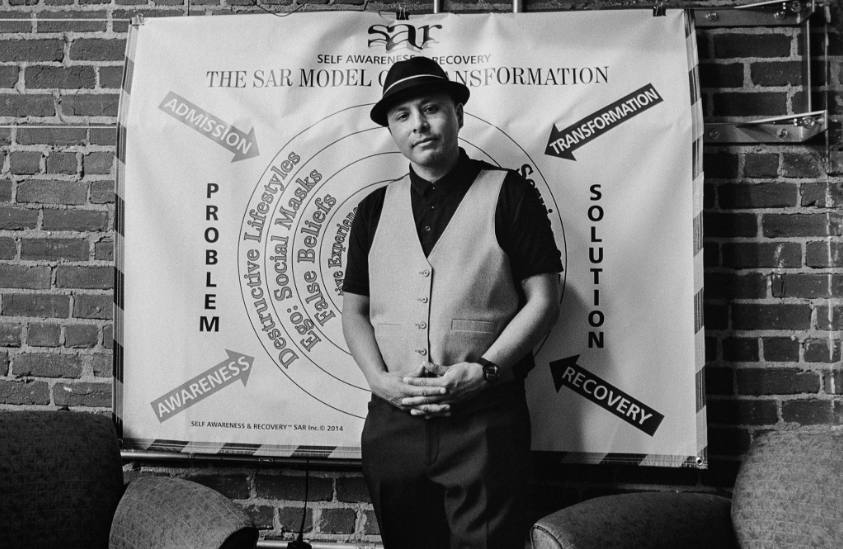 Mr. Ortiz moved to Sacramento, where he found transitional housing and works with Self-Awareness and Recovery workshops in schools, juvenile halls and prisons in Northern California. 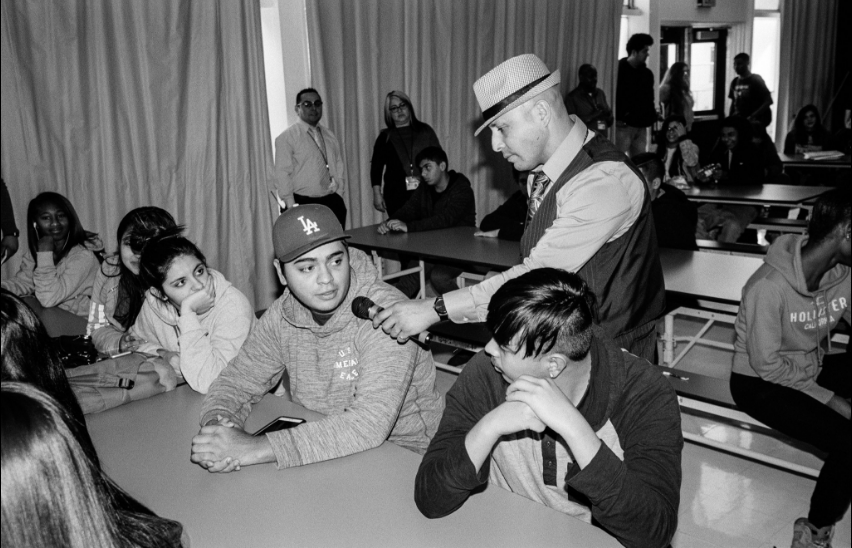 At the Yolo High School in West Sacramento, Mr. Ortiz speaks with students about their concerns with the challenges they face growing up in neighborhoods with gangs and crime. 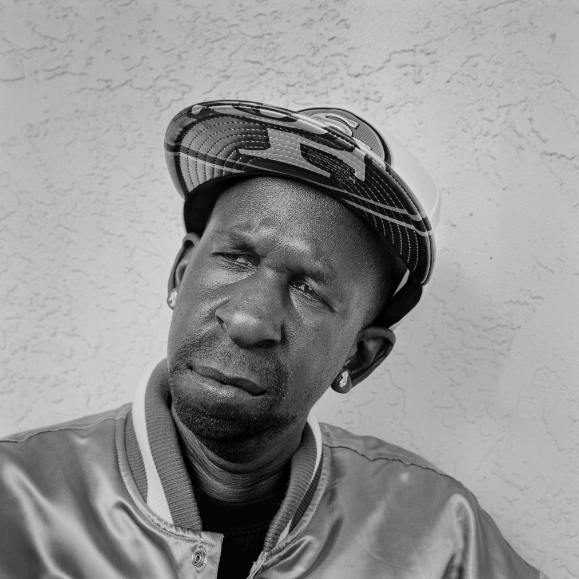 Alfred Hill, 32, came out of prison in 2016 and went to the organization Friends Outside to find a job. He says: “My motivation this time is different. I have four children and my baby mama to support.” 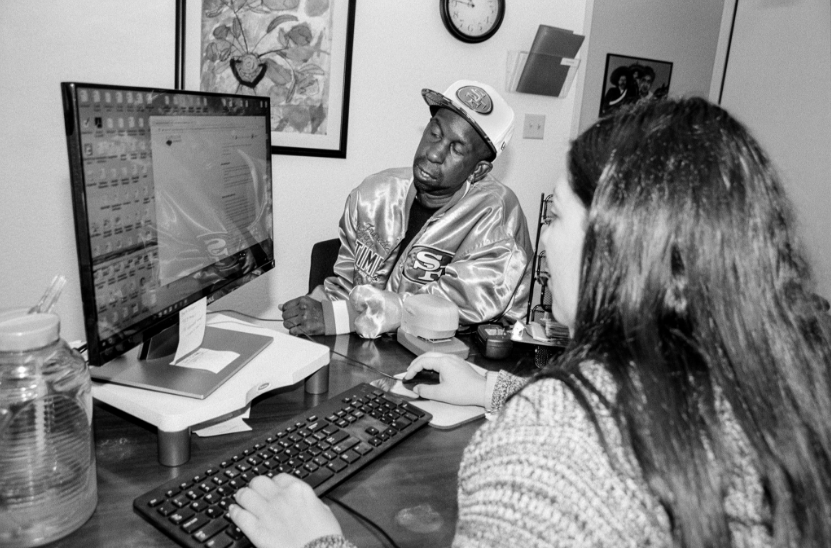 Mr. Hill meets with Melanie Tellez, a case manager at Friends Outside, to find him employment, and ends up with work in a warehouse. Friends Outside has over 55 years of experience working inside institutions and with families and children of incarcerated individuals. 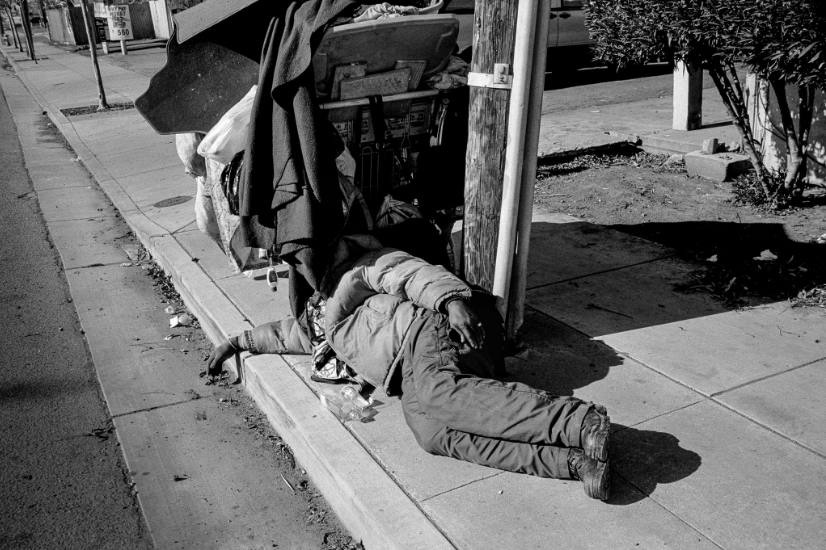 According to the Census Bureau, nearly one in four people in Stockton live below the poverty line. Many ex-felons who are released without a familial support system are at high risk for homelessness. 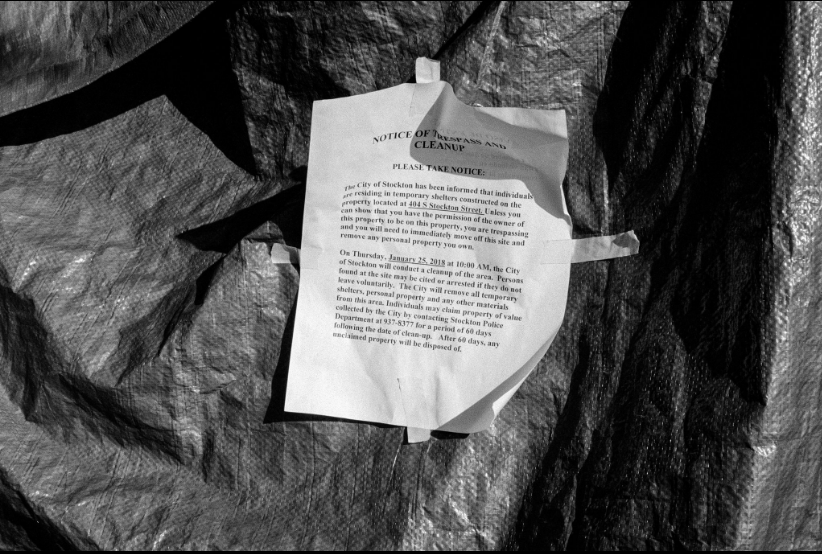 In Stockton, homeless people often receive a “Notice of Trespass and Cleanup” from the city taped on the tents at their encampments. The notice declares that they have just a few days to pack up and move out.

Mr. Silva was waiting for a moving van when we spoke; three years out and newly off parole, he was headed for a new apartment, the first in his lifetime with his name on the lease. He attributed his own trajectory through a series of foster homes, group homes and juvenile halls — and eventually, he said, to prison for a crime he did not commit — to an absent father and an abusive, alcoholic stepfather. Addressing these early wounds, he said, is the key to successful re-entry to society. “You can get a person a job, get them into school, but if they’re not at peace, they’re not going to succeed.”

This same insight drives the San Joaquin County Parole Re-entry Court, which operates under the fatherly eye of Judge Richard Vlavianos of State Superior Court. Judge Vlavianos and his colleague Brett H. Morgan, who is also a Superior Court judge, and a team of case managers convene once a week in the downtown Stockton courthouse. In a three-hour session that can include tears and applause, they offer a safety net of drug treatment, accountability, housing and individual and family counseling that keeps most of the parolees who come before them out of prison as well as off the streets. 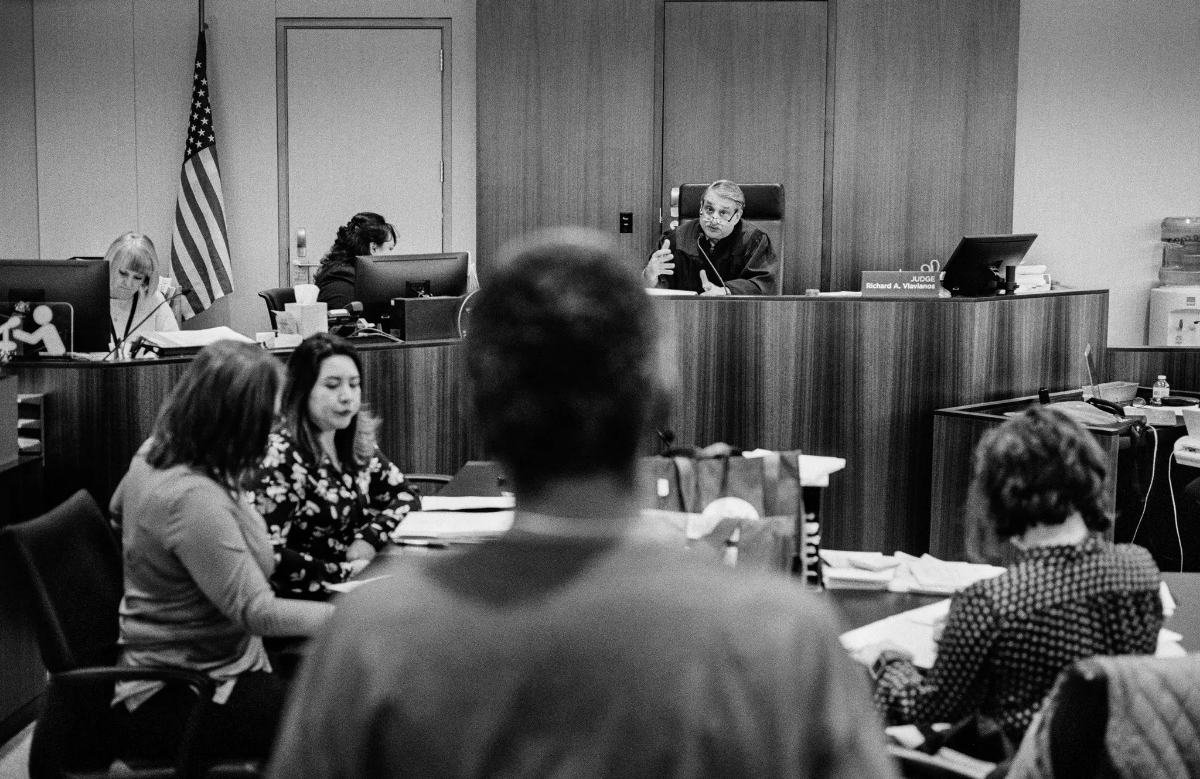 Judge Richard A. Vlavianos and colleagues with the San Joaquin County Parole Re-entry Court work to offer a safety net of drug treatment, housing and counseling that keeps most of the parolees who come before them out of prison as well as off the streets. Joseph Rodriguez for The New York Times

“You’re trying to develop trust,” explained Judge Vlavianos, who routinely descends from the bench to dispense handshakes, hugs and the occasional skeptical raised eyebrow. “If they think it’s us against them, we’ll never get anywhere.”

Results are typically measured in terms of recidivism, defined as a return to prison within the first three years out. Those who manage to stay free past this milestone — roughly half — are considered success stories.

There is some logic to this form of accounting: The longer you are out, the more likely you are to stay out. Mr. Rodriguez’s portraits reveal a deeper measure. Prison leaves a lasting mark.

Joseph Rodriguez is a photojournalist whose latest book is “Spanish Harlem: El Barrio in the ’80s.”

Nell Bernstein is the author, most recently, of “Burning Down the House: The End of Juvenile Prison.”