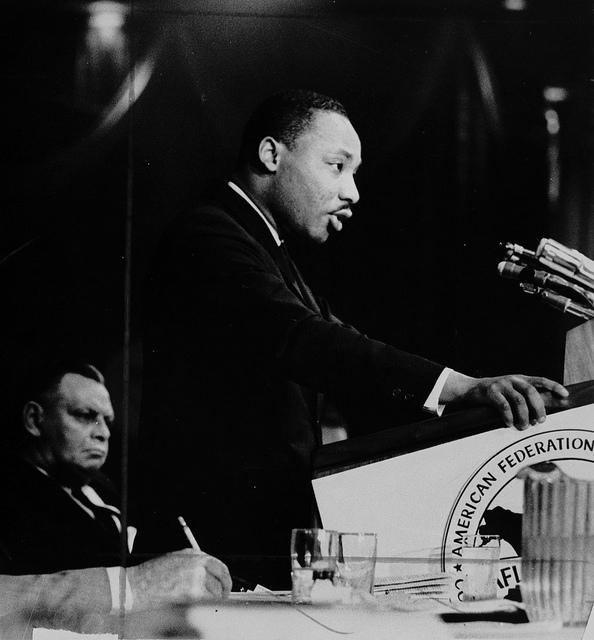 When Martin Luther King, Jr. boarded his fateful flight from Atlanta to Memphis April 3, 1968, he was feeling isolated, menaced, and tired. Many of his supporters were turning on him.

King was flying to Memphis for a demonstration with the city’s striking sanitation workers—his third visit to the city in as many weeks—who faced a litany of indignities, including earning just $1.80 an hour while toiling under deadly and degrading conditions. (For instance, they were not given time or space to wash their hands before lunch.)

The strike was meant as an opening salvo for King’s Poor People’s Campaign. That summer, he planned to lead a “multiracial army” of struggling people in Washington to place “the problems of the poor at the seat of government of the wealthiest nation in the history of mankind,” King wrote. The campaign included comprehensive anti-poverty policy proposals for Congress and President Johnson to act on.

His shift towards advocating on behalf of the poor had sparked a hemorrhaging of financial support from powerful white quarters. Dissent among his own black ranks grew. The mainstream press issued stinging criticism. Yet King’s focus on economic inequality at the time of his murder at 39 years-old could not have been more on point. On the 50th anniversary of his death, the gap between rich and poor in this country has reached a crisis level.

Serving as a spiritual, conciliatory voice against Bull Connor’s racist brutality was one thing; pivoting into an unbossed and caustic activist against poverty and the Vietnam War quite another. Many Establishment whites complained that King’s two newest priorities—poverty and Vietnam—muddied his purpose as a nonviolent spokesman for racial reconciliation, turning him into a “rabble rouser.”

His rich backers wondered what business the feel-good oracle of nonviolence had to peddle expansive anti-poverty legislation or to meddle in military affairs. Without family and only aides by his side, King boarded his flight, eyewitnesses report, determined, lonely, and with doom etched on his face.

A day after arriving in Memphis, King was shot and killed by James Earl Ray, a white supremacist born into harrowing poverty himself. All these years later, the reverend’s dark premonitions about labor prove accurate. A system that exploited workers in the late 1960s drastically worsened, even as America’s breadwinners would become more female, more brown, more productive at work.

The statistics around our nation’s economic inequality are staggering. The bottom half of the population, 160 million people, own the same amount of wealth as the nation’s three richest people. It takes an ordinary American worker one year to earn what a CEO can earn in a day. And the share of the nation’s income going to the middle class—the middle 60 percent of households—has fallen to a historic low since 1967 (the first year that the Census Bureau began releasing income-share data). The middle class has never received a smaller share of the country’s wealth since the late 1960s.

Meanwhile, housing, food, healthcare, and education costs soar. But the minimum wage has fallen since 1968 (using inflation-adjusted dollars). Little wonder, if you work full-time at today’s minimum wage, taking no vacation, you can earn $15,080 annually. Contrary to popular belief, the average minimum wage worker is not a teenage boy slinging hotdogs part-time at the beach. Two-thirds of the minimum-wage work force are women, with a median age of 32, many supporting families.

But statistics tell us only so much. The inequality crisis shows itself in the toxic look of things. The Trump administration is, in many ways, the ugly manifestation of King’s fears on the eve of his death.

Take, for instance, this year’s State of the Union address, a truly grim spectacle. As Trump’s cabinet full of millionaires and two billionaires applauded—alongside his daughter and son-in-law, shadowy, unaccountable “advisors” angling to gobble more wealth—the president spent 30 minutes crowing about his tax cuts. The camera panned to capture the sneering, contented faces of Mike Pence, Paul Ryan, and the GOP leadership: millionaire white men cheering his empty platitudes about hard work and the working class, even as they plundered the collective treasury to enrich their cronies. I don’t know a dystopian novelist who could have produced such an effect.

Wealth gaps pre-date Trump and are partly the result of globalization, technological change, and the rising power and lucrativeness of high finance. But don’t dismiss this crisis as inevitable historical change nor applauded as just the talent and effort of the super-rich. Rather, the crisis is a cancer of inheritance, dodgy business practices, and the rich’s lopsided influence on law-making.

This administration’s corrupt dealings with moneyed interests and its unchecked handouts to wealthy individuals—mostly in the form of tax cuts and crooked business deals—inflict massive harm on working people. There are a nauseating number of examples. Corporate interests host events at Trump-owned properties. Trump children fly around the world, on the taxpayer’s dime, in pursuit of real-estate and licensing deals. Current and former cabinet officials are caught for outrageous misuse of public money for personal purposes.

Americans are bombarded with talk about tax cuts and tariffs, but none of the actions that could meaningfully lessen inequality in this country are on the president’s or Congress’ agenda, such as high-tech job training, raising the federal minimum wage, implementing debt-free college, or reforming Citizens United.

Even well-informed, ethical folks are caught up in this swirling inequality shitstorm. Never will I forget that morning in early February 2006 when, groggy, I picked up my cell phone to urgent news. King’s widow, Coretta Scott, had passed away. Bill, a white corporate lawyer and friend of the King family, wanted to know if I cared to be one of his guests to her funeral in Atlanta. Days later, I arrived to his sprawling Upper West Side mansionette and we took off in his chauffeur-driven SUV. Then we boarded the private jet.

Upon arrival, our party sat no more than ten pews behind Jimmy Carter, George H.W. Bush, Bill and Hillary Clinton, and George W. Bush, who all huddled together. Then-Senator Barack Obama was somewhere on site.

When King died, the FBI was spying on him and high-level leaders were not taking his calls. President Johnson declined to attend his funeral. But four U.S. presidents attended his widow’s funeral, alongside a bevy of financial, corporate, and legal elites who swooped in, paid their respects, and bailed on the eight-hour service by lunch time.

The event highlighted just how much the Civil Rights icons morphed: He ricocheted from an aggressive and isolated activist against inequality back to his early symbolism as a stirring racial healer.

King understood clearly the violence haunting black men still and the voter suppression in our communities. Meanwhile, he could not have predicted the billionaire grifter bonanza debasing the republic. He could not precisely foresee the stiff headwinds blocking this country’s flight toward a more perfect union, the grip of inequality. Income and wealth gaps are drastically worse, at red alert, on the fiftieth anniversary of his death.

Rich Benjamin is the author of Searching Whitopia: An Improbable Journey to the Heart of White America.