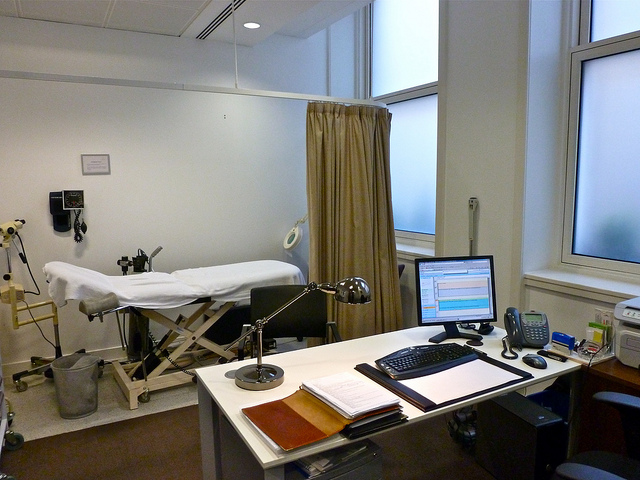 Women have gotten more vocal about their sexuality, their experiences of sexual harassment, their feelings about their bodies — but the horror of routine pelvic exams remains seriously under-discussed. On a website called For Women’s Eyes Only, someone describes finding pelvic exams so “humiliating, degrading, and painful” that she has to prime herself with a Xanax to get through one without a panic attack. Some women simply refuse to submit to these exams — especially if they lack the means to search out a doctor with whom they feel even marginally comfortable. Most of us just tell ourselves that our fears are childish remnants of an archaic modesty. We suck it up, spread our legs, and attempt to achieve an out-of-body experience.

But our dread is not entirely irrational. Statistics on sexual abuse by doctors are inherently sketchy, if only because most victims are too shocked or traumatized to say anything about what went on the examination room. But a 2016 study by the Atlanta Journal-Constitution found that 2,400 American doctors have been publicly sanctioned for abuse. I, for one, have endured at least three medical assaults — including one by a gynecologist who saw fit to manipulate my clitoris (a distinctly unpleasurable experience) and, bizarrely, one by a woman doctor (in apparent retaliation for all the questions I was asking her). But I have never spoken of these incidents and would find it painful, years later, to describe them more fully.

Clearly, the medical profession has a reckoning coming.

What makes medical, and especially gynecological, procedures susceptible to misuse by predators is that they often so closely resemble real sexual interactions. Consider the standard gynecological exam, which women are expected to undergo annually: It consists of breast palpation, vaginal penetration, and often a rectal examination. These are shockingly intimate procedures. If a person were to come up to you on the street and offer to perform them, you would scream for help. But if that person represents himself as a licensed physician, backed up by years of scientifically based training, and you encounter him in a sterile-looking professional office, you would assume that whatever he does, however unpleasant, is done entirely for your own good.

This is why Larry Nassar, the longtime USA Gymnastics national-team doctor, was able to get away for so long with the sexual abuse of the young female gymnasts entrusted to his care. As one of his more than 135 victims stated: “I just told myself it was normal, that he knows what he’s doing and don’t be a baby.” Another serial molester of girls, Donn Ketcham, was a doctor working at an American evangelical mission in Bangladesh in the 1980s. He told the young daughters of missionaries that his “exams” were necessary for their health. If a twelve-year-old questioned him about what he was “feeling for,” he would reply, “Just checking.” Although the exams were medically unnecessary, since breast and cervical cancers rarely occur in children, he performed them on one girl almost daily.

Obviously, fiends like Nassar and Ketcham need to be apprehended and punished. But what about the ordinary noncriminal doctor going about his or her business? American women are usually expected to undergo annual pelvic exams twice as often as women in other advanced countries. In addition, a woman may have to put her feet up in the stirrups because she needs a prescription for birth-control pills, or because she fears STDs, or simply because she is there. One evening, when I had been briefly hospitalized for some cardiac symptoms and was comfortably reading in the hospital bed, a young male identifying himself as a resident showed up and announced he had to do a breast and pelvic exam. For cardiac symptoms?

Certainly there are times when a pelvic exam may be useful or necessary — if, for example, you are experiencing pelvic pain or unusual discharges or bleeding. But routine exams, performed yearly on asymptomatic women, are an entirely different matter.

The first indication that they are being performed far too often came from studies done in 2011 by Dr. Carolyn Westhoff at the Columbia University School of Medicine, who told an interviewer that some of her colleagues asked, “Carolyn, are you trying to put us all out of business?”

Three years later, the American College of Physicians, which represents internists, strongly urged that doctors stop performing routine gynecological exams on symptom-free patients. Most recently, the prestigious United States Preventive Services Task Force declared that there is not enough evidence to either justify or discourage routine pelvic exams. Even the American College of Obstetricians and Gynecologists, which has the most to lose in this debate, has begun to waver.

There is a word for a medical procedure that is performed repeatedly but with no verifiable beneficial effect on the patient — ritual. This is the word that nineteenth- and twentieth-century anthropologists applied to the healing practices of indigenous peoples, which often involved drumming, dancing, chanting, and the manipulation of sacred objects such as animal teeth and feathers. To distinguish these activities from the medical procedures of “real” — meaning Western — doctors, anthropologists called the indigenous healing practices “rituals,” meaning that they were more of a performance than anything a “civilized” person would recognize as medical care. Today, we have to acknowledge that the routine pelvic exam is not a serious, evidence-based medical intervention; it is, in the full pejorative sense, a ritual.

Some influential doctors have taken to defending ritual for its own sake, as an essential part of the doctor-patient relationship, and especially when that ritual includes intimate touching. Stanford’s Dr. Abraham Verghese has said:

His repetition of the word submit is telling — because what does the ritual of the gynecological exam convey to the patient? When the doctor is male, the ritual exam reenacts male domination and female submission. When the doctor is white or — as is usually the case — of a more privileged class than the patient, the ritual reinforces his or her social superiority. These, I would submit to you, are messages we do not need to hear.

Yes, we have to continue to fight for greater access to health care, especially for the underpaid and underserved parts of the
population that often have to go without prenatal care, dental care, and medical support for chronic conditions. What no one needs, though, are procedures that exist only to flatter the egos or excite the libidos of the practitioners. The time has come to get up out of the stirrups and say no.

Barbara Ehrenreich is the founder of the Economic Hardship Reporting Project and her latest book is Natural Causes: An Epidemic of Wellness, the Certainty of Dying, and Killing Ourselves to Live Longer.