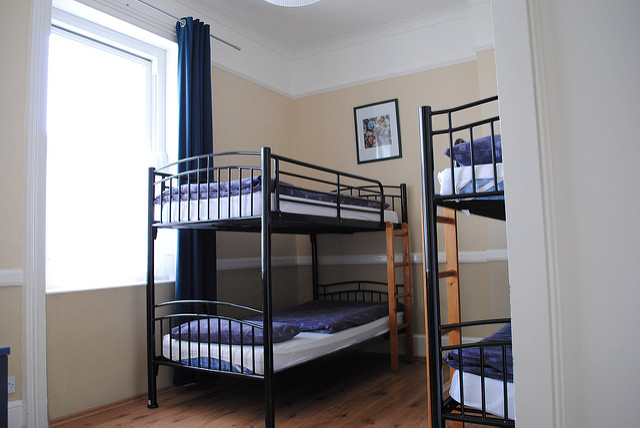 My friends had grown tired of my guest room invasions after I moved back from Portland, Oregon to L.A. last year. These friends had homes full of kids, after all. That fall I’d found a foothold onto the city through seasonal work composing tweets and Instagram posts during football games for the Los Angeles Coliseum, but the cost of frequent Motel 6 stays had outstripped my income, leading me to venture into the very cheapest Airbnb rentals, what for most visitors to the site is a no-scroll zone.

Take my visit to “Alex” and his $25-per night listing for a shared room in an “awesome place, best location in LA.” In truth, Alex’s operation—12 beds squished into three squat rooms with a gas odor in the kitchen—was in a neighborhood where gentrification was still simply a tall tale. I’d told myself that my circumstances were still not as bad as this. I decided to crash in this pop-up hostel for three nights and escape with only about $75 exiting my bank account.

My main complaint with the place was with the host, “Alex,” who didn’t make even a cameo appearance during my stay. I wanted to ask him about the broken seat that sat upon a toilet crammed into the single restroom’s corner, like a long division remainder. Then there was the woman who punched in the code on my room’s door knob on the very first night and strolled right in. It wasn’t a matter of my privacy being invaded; do the shared living long enough and there will be unrequested adventures in nudity. (The Europeans handle that part of it best.) The gas smell though was a concern.

Alex’s rates were low—less than an entrée at many L.A. restaurants—but he was clearly making out. As were many hosts of his ilk, absentee or not. A study of Airbnb company’s impact on New York City—commissioned by the threatened hotel industry—showed that in all 72 of the city’s predominantly black neighborhoods, hosts are five times more likely to be white. “In those neighborhoods, the Airbnb host population is 74 percent white, while the white resident population is only 14 percent,” according to the report. “White Airbnb hosts in black neighborhoods earned an estimated $160 million, compared to only $48 million for black hosts—a 530 percent disparity.

But was all of this the estimated $30-billion-plus company’s intended purpose?

“Airbnb helps to democratize travel by helping everyday people travel to places they might have missed, including places they otherwise could not afford,” Airbnb spokesman Charlie Urbancic explained via email. “We’re also democratizing capitalism by helping ordinary people use their home—normally their biggest expense—to help pay for things like food, rent, and their children’s education.”

The worlds of work, shelter, and travel have merged, forming transitory housing conditions born of the gig economy. A squint-to-see-it precariat moving about the ever-more expensive cities of America. I was far from alone in my predicament. Sometimes the results are unabashedly horrifying, like the normalized way that parking lots are turning into places for the formerly middle class to live in their cars. Defining homelessness has become a more dicey proposition than ever. The flowering of communities around couch-surfingshows this just as certainly as organic farming’s “wwoofer” phenomenon. This story, in other words, is not about homelessness, but a weightless way of living for people without money that’s transforming renters, hosts and neighborhoods. The average rent for a 1-bedroom apartment in Los Angeles is $2077. In Oregon six months prior, I’d split monthly payments of less than half that. Renting an apartment in California’s less brutally expensive Central Valley became a viability.

But no one can take a meaningful meeting, look their podcast producer in the eye, or press well-connected flesh while in Fresno or Bakersfield. Might as well be in Oregon.

Despite the illusory host and funky, cramped quarters, Alex’s reasonable price of $25 spurred a return visit. But this time when I punched in my room code and swung open the door I was overpowered by the aroma of spunk. Not mere semen. As any parent of teen boys will testify, spunk is an extremely specific smell. There was clothing in piles on the floor. The room was dark, I backed away. It was no place to exist even for a night.

The next door was to the room in which I first stayed and whose code I remembered. No one, no suitcases inside. The bottom bunk bed I’d slept in last time, however, had been broken. Smashed, not at a box spring, which of course the cheap furniture never had, but at its metal bottom.

One of the upper bunks was actually made—and only the faintest scent of semen. My body was spent, so I sighed and claimed the wobbly bed. But one of my new transient neighbors, a twentysomething South Asian woman spoke of an even cheaper option. “You know?” she asked as though about to drop privileged data, “there are $17 Airbnbs. I’m going to try one.” Not me, I told her. Sounds like an invitation to be feasted on by bedbugs. And those words were sincere. Alex ultimately tapped out on the Airbnb game. Turns out that a guest caught the place understaffed and reportedly got assigned a bed encased in a blood-stained sheet. She posted a graphically detailed review, then people stopped booking Alex’s “awesome place.”

Soon enough, I was dragging my rolling suitcase to $17-Airbnb in a clean and welcoming four-bedroom house about nine miles away. Though the couch wasn’t quite long enough for my 6-foot frame, the place had me from the jump. The spacious home had a crazy-quilt quality. The hosts, Jordan and his girlfriend Kalani, struggling film aspirants, drank tequila and smoked cannabis with me. No fake names. No fake nothin’.

That $17 Airbnb, which now costs $19 per night, became the place where I continue to live. The couple invited me to stay indefinitely in my own room for the bargain rate of $100 per week. Whether this was a sign that either travel or capitalism has been further democratized is an open question. What’s undeniable is that, for at least the coming nights, I have found a home.

Donnell Alexander contributes to The Nation, Capital and Main and Rolling Stone, among other media outlets. He is the author of Ghetto Celebri
ty: Searching for My Father in Me.