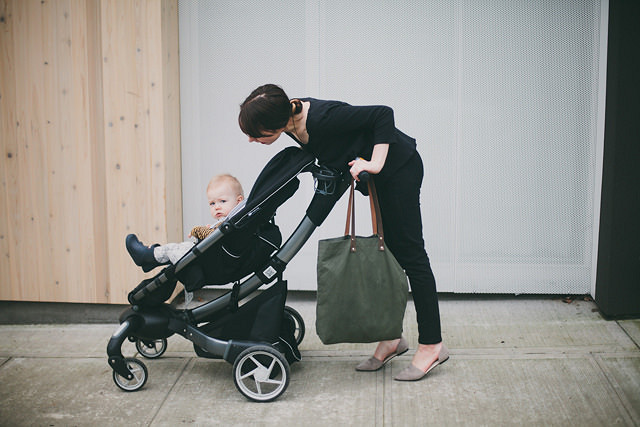 Editor’s Note: This piece is adapted from Alissa Quart’s new book, out Tuesday, Squeezed: Why Our Families Can’t Afford America.

Mothers suffer in the workplace. That fact is by now so painfully familiar it even has a name, the motherhood penalty. Scholars and parents have both found that employers are less likely to hire women with children than men or childless women. One study found that mothers were likely to be offered salaries at $11,000 less yearly than their qualified-but–child-free peers and $13,000 less than fathers. A new study from the usually Edenic-seeming Denmark showed that, even there, women’s gross earnings dropped substantially after their first child and that mothers ultimately earned 20 percent less than men.

What is that, you may ask? It’s a concept gestured at by philosophers and psychologists and, yes, actual mothers: It’s basically that parenting helps us as workers rather than simply hurting us. Yes, having a child squeezes our time and our budgets, distorting our earning power and professional trajectories. But in my many interviews with mothers and fathers for my new book, Squeezed: Why Our Families Can’t Afford America, parents’ personal narratives showed me again and again that their caregiving roles were a double-edged (plastic and play) sword.

Seven years ago, when I first had my daughter, I explored the science behind this issue. I was looking to reframe motherhood and child rearing for myself: I had somehow come to think of motherhood, which was a personal blessing to me, as a professional retreat and burden, and that I would have to try to excel in my work in spite of it. But a cache of my friends and interview subjects told me that their work improved after their maternity. This achievement was not necessarily as rewarded, recognized, or well-paid as it should have been, though.

They reported that fundamental workplace skills like listening, reasoning, leadership, and scheduling had enhanced their labor rather than detracted from it. They even learned management skills from taming their toddlers. And a number told me they used their working hours better than they had before they had children, with improved concentration.

There are broader findings than my anecdotal ones that support the idea of a motherhood advantage. A Federal Reserve Bank of St. Louis survey found that mothers were more productive in their jobs than women without children, a discovery obtained by surveying 10,000 academics. And some anthropologists have researched primate moms and found them to be nurturing but also ambitious, fighting for their and their youngs’ survival, managing their own desires as well as their passion for their offspring.

Sara Ruddick, a philosopher and mother, argued in her book Maternal Thinking: Towards a Politics of Peace that motherhood involves distinct and highly desirable ways of thinking. Parenting is a discipline. It demands flexible thinking in relationship to children, whose brains Ruddick termed “open structures.” What if being able to manage and lead minds so different from our grown-up minds is in fact valuable, not just in a personal or familial way but also in a professional sense? What if you can take the flexible thinking you use in raising a kid into your work? In a global marketplace, after all, a wide range of minds and personalities confronts us. Ruddick wrote that we could privilege the intellectual skills a mother finds in parenting. All of this means that “maternal people” have cognitive capacities and understandings of virtue that have broader applications than just to their mothering.

If we were to embrace the sometimes surprising new “capabilities” that parenting gives us, we might see our mother selves as more than milk-stained wretches, and for that matter, our father beings as more than mere squelched figures of fun. Parenting makes us better, in so many regards. Lisa Baraitser, a professor of psychosocial theory at Birkbeck, University of London, and author of the book Maternal Encounters: The Ethics of Interruption, has written of the mother’s unique perspective and her values of “interdependence, flexibility, relatedness, receptivity … preservative love,” values she says we should enshrine.

But how can we convince those who are still sure that hiring parents—and mothers in particular—crimps their business’s success or their productivity? I recently asked anthropologist Sarah Hrdy, who studies primate mothers, how to get people to understand that “mom brain” is not a disability of sorts but a kind of focus that can be helpful.

“Many anecdotal accounts from women indicate they are more organized after their babies are born and they go back to work. They may well be—but not necessarily because they are biologically more efficient—but because they have to be,” Hrdy, a professor emeritus of anthropology at the University of California–Davis, and the author of Mother Nature: Maternal Instincts and How They Shape the Human Species told me. “That said, there is much evidence to suggest that women are physiologically more durable than men and use their energy more efficiently, especially perhaps when pregnant.”

She points to studies by the late Craig Kinsley on the science of all of this. Kinsley found that the result of motherhood “is a different and in some ways better brain—or at least one capable of juggling the challenges of everyday life while maintaining a laserlike focus on the baby.” And there are other studies like a 2010 report by neuroscientist Pilyoung Kim and colleagues, “The Plasticity of Human Maternal Brain: Longitudinal Changes in Brain Anatomy During the Early Postpartum Period,” that found real increases in mothers’ gray matter on the weeks and months after they give birth. Hrdy is waiting for more conclusive evidence, she says, before she can come down in a full-throated way for what she terms, in a phrase befitting Wonder Woman, “postpartum superefficiency.”

Of course, we needn’t have absolute evidence of the superiority of mothers to see the professional value of maternity. In many ways, it just makes sense. The novelist Toni Morrison pointed to a motherhood advantage when she said that “there was something so valuable about what happened when one became a mother.” It was “liberating because the demands that children make are not the demands of a normal ‘other.’ The children’s demands on me were things that nobody else ever asked me to do. To be a good manager. To have a sense of humor.” In other words, the unusual requests and thinking of kids tend to demand different skills from us—like wit—than we have needed or developed before, many of which can help us be better workers.

Still, for the “motherhood advantage” to become widely effective as an idea, one that could gain women greater recognition of their abilities and perhaps counter employers’ biases, it first has to be widely understood. Knowledge of the motherhood capacity must reach all those mother workers rejected and shamed by the labor marketplace (some of whom may be currently slumping with stigma or self-hatred) and their employers and co-workers.

So spread the word. Exhort the possibility of a “motherhood advantage” to your friends. Talk about your kids on the job, put their pictures on your desk, and certainly don’t hush your voice to a whisper when you take a break to chat with the school nurse about their pulled front tooth. And be sure to hold your motherly head high as you leave at 5:30 to relieve the sitter each day. After all, your progeny may indirectly be giving your colleagues or your bosses the gift of your improved work, a gift we all need to recognize, and then reward.

Alissa Quart is the executive editor of the Economic Hardship Reporting Project. She is the author of three nonfiction books—Branded, Hothouse Kids, and Republic of Outsiders—and the poetry book Monetized. She also writes the Outclassed column for the Guardian.