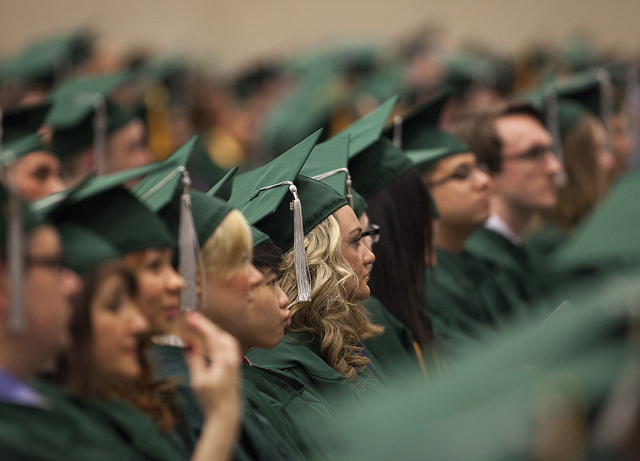 Do You Have Student Debt? There’s a Reality TV Show For That

Do you have student debt? What would you do to make it disappear?

In Paid Off, a new game show that promises to do just that for at least one lucky winner, we see three young people compete to get their loans paid off. The show’s host and creator, Michael Torpey, a comedian and actor, has created a formula for his TruTV program. For every trivia question the contestants answer correctly, the show pays off an increment of their student loans. If a contestant does particularly well, he or she might pay off their entire debt – which, for the contestants in the first episode, is as much as $40,000.

Paid Off may be a mere TV game show, but it also wants to be something more socially useful – an angry satire using goofy entertainment as a vehicle for political dissent. The show shifts abruptly from Benny Hill-type physical humor of punching holes in a fake wall to a losing contestant being instructed to go over to a red phone onstage and call their congressperson to complain about the scourge of student debt.

The loans hanging over these young people’s heads have sadly stymied their ability to achieve the modest milestones of American middle-class adulthood: buying a car, getting married, making a down payment on a house. They’re far from alone.

Paid Off enters the fray at a time when Americans are $1.5 trillion in student debt – and our head of state is a man whose name formerly adorned a for-profit college, Trump University, responsible for some of that debt. Last month, secretary of education Betsy DeVos stopped sharing information about fraud against student borrowers with law enforcement agencies – enraging New York’s Attorney General, who tweeted, “We use that info to prosecute crimes and fraud against student borrowers. Now we can’t. This should be front-page news.”

The national nightmare of student debt – and the impunity of the colleges and private lenders who profit from it – are the targets of Torpey’s 16-episode show. The show came “from personal experience,” Torpey told me.

His wife owed $40,000 when the two met. In contrast, Torpey himself “was able to go to school and not worry about debt”; his parents paid for four years of Colgate University and he “was able to make what I wanted of my college experience…I was able to be a theater major, a ridiculous decision.”

During his early relationship with his now-wife, Torpey began to notice how their lives differed because of the presence or absence of student debt and how anxious her debt made his wife – the “invisible burden, how every decision that you make all day” is influenced by it. After he booked a well-paying Hanes commercial, and they got engaged, Torpey decided to take the underwear money and wipe her debt out with a single check. (His wife is now a psychotherapist and the family lives in Queens, New York.)

Paid Off joins a growing ecology of films and TV shows about debt. After the collapse of the credit economy in 2008 and its aftermath, debt became a frequent theme in popular culture, says Annie McClanahan, a professor of English at the University of California, Irvine and the author of the book Dead Pledges: Debt, Crisis, and Twenty-First Century Culture.

“The difference between a ‘credit aesthetic’ and a ‘debt aesthetic’ is that credit depends on certainty and credibility,” McClanahan told me. Books and films and TV shows about credit tend to be more realistic. “Whether we are ‘reading’ an IOU or reading a novel, the fiction of credit is real insofar as we (and other people) believe in it,” McClanahan explains.

“But debt – especially when we can’t be sure it will be repaid – has none of that certainty or credibility attached to it.” For that reason, popular culture about debt is less realist: “horror is one obvious example; comedy is another.” In this regard, says McClanahan, the tone of Paid Off fits a madcap comedic debt aesthetic of uneasy wit.

Indeed, when life became a game show idea for the 38-year-old Torpey, he wanted to make something that was both “controversial and provocative” and “fun.” He was inspired in part by the famous episode of Last Week Tonight, the news-comedy show hosted by John Oliver, in which Oliver bought $15 million of medical debt and forgave it.

The debt episode of Last Week Tonight “was very manic and also manically optimistic,” says McClanahan, “offering a kind of populist version of ‘irrational exuberance’ alongside its fantasy that pennies-on-the-dollar debt buy-back just might be a real solution.”

In post-recession shows from Sneaky Pete to Breaking Bad, personal debt is a frequent theme or plot device, functioning as a kind of aggressive structuring absence. The book and film The Hunger Games is the Rosetta Stone of what I think of as “the debt aesthetic”; “like me, they don’t like to let debts go unpaid,” the heroine, Katniss, says in the novel. The Hunger Games was followed by a whole subgenre of grim sci-fi films like Elysium. (There’s also a broader category of shows and films that I have elsewhere called “inequality entertainment.”)

Both the humor and the horror of debt are usually part of these sorts of films. And why not? After all, when the source of our desperation or our resentment is alchemized into trippily comedic TV, how could it not be, well, tonally weird?

Torpey hopes that, by “laughing at the tragedy,” his avowedly “satirical” show will “galvanize people.” He says its audience is people in their late 20s and early 30s, the “same people who are delaying these big life decisions over their debt.”

McClanahan sees Paid Off as a show in the vein of “comic resignation” – a kind of “30-minute shrug emoji.” She added: “[It] is probably the way a lot of young people feel about their student debt these days – not hopeless, quite, but perhaps only because they had so little hope to begin with.”

The notion of college as an “investment” – a widely-held American totem that rationalizes, and enables, the staggering cost of American college – is punctured early in the show. One contestant deep in student debt says he’s still a restaurant server. Another, an anthropology major, admits that not only is she not working anywhere near that field but that she doesn’t even want to be asked game show questions on the subject.

“We need a shift,” Torpey told me. “We need more empathizing and no more blaming.” He hopes that a change in cultural attitudes could also lead to a “conversation about forgiving loans,” and the economic benefits of forgiveness.

And, in case you missed it when you were distracted by Paid Off’s muscular contestant punching holes in a fake wall for cash prizes, there is an even broader message Torpey hopes people will take away from his show: “You went to school at a time when the system was set up wrong.”

Alissa Quart is the author of Squeezed: Why Our Families Can’t Afford America.