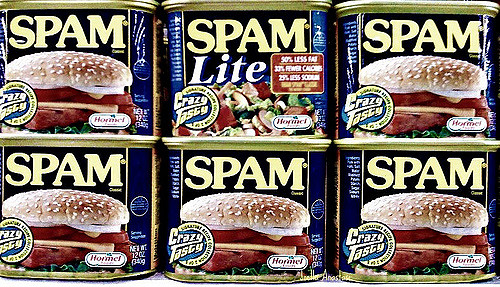 The Food of my Youth

When you are always on the run, from the bill collectors or the Man, or people in suits checking up on you, you need foods with a long shelf life. When the lights went out in our apartment and so did the electric stove, we lived on saltines with peanut butter and beans from a can. We ate like miners. There was a certain pride to be had in eating like men who were prospecting for gold, because the prospect of a better future is what had brought my family here to northern California. Later, in the early ’80s, Ma’s pursuit of higher education plopped us in our small apartment in Los Angeles along the 405 freeway.

Meanwhile, my grandmother’s garage back in Seaside was lined with MREs—Meals Ready to Eat. I fingered those army-colored cans and felt safe. Their sturdiness, the security my Filipino grandfather gave us by earning them when he was in the US Army. He’d brought us from the hungry jungle to a decent house in a small town by the ocean.

Growing up, I drank powdered milk and ate Spam, Vienna sausages, “new potatoes” (small, peeled potatoes in a can), and rice with butter, salt, and pepper. The vegetables were jaundiced, green beans made salty and chewy in chicken stock, or sweet, thick creamed corn.

For dessert, we had Halo-halo, an array of tropical sweet beans and chewy strips of orange jackfruit served over ice, with sweetened condensed milk, a Filipino treat—the most complicated act of love. To get the ingredients, we had to go to a special Filipino market, but once we had them, they would last on the shelf all year long.

We did our best to get enough food. We tried to get in front of the hunger by eating casseroles, greasy noodle dishes, and white bread covered in that sweetened condensed milk. Or SOS—“shit on a shingle,” toasted white bread with white gravy—ground beef when we could afford it, a block of Velveeta cheese in the freezer, and a plate with softened butter on the table.

We ate quickly and with our hands. Raised plates to our mouths and made a trowel out of chopsticks. We lived as people without money do, with a sense of impending doom that everything as we knew it could end at any time. Despite the end-time anxiety, we ate as often as possible. Ma and I left my Lola’s house for Los Angeles so she could go to college. When we ran out of money one Christmas, we ate the free, sticky vegetarian treats handed out after dancing with the Hari Krishnas.

We ate at people’s homes in the evening before reciting the rosary, in soup kitchens, outside churches—sometimes after playing musical chairs around a cake, it was called the cake walk… a game played at street fairs. And we drank coffee at all hours to quell our appetites. Not real coffee but the International Delights kind, a powdered sugary drink. I’d say that this felt like junk or that I felt like I had a strong stomach, or that it felt like decades of poverty running through my veins, but I don’t have much else to compare it to. I knew other kids in our apartment building who walked around with a sandwich baggie filled with Kool-Aid crystals, we’d lick our fingers and dip them in, suck the pink, purple, blue, powder off, all of us a gaggle of dyed tongues. It wasn’t until later that I felt ashamed of the things I put in my body.

When I was fifteen, I was taken out of Ma’s care. There was abuse and there was resistance and there was a single parent trying her best, but her best wasn’t the same as Department of Children and Family Services’ best. I walked into my first group home. After scavenging through a bin of donated clothes, worn T-shirts with summer-camp slogans of places I’d never been, I encountered in the kitchen a new world of locked refrigerators with dated food in plastic containers. On the doors was affixed a detailed meal plan:

It was lonely there, but at least I didn’t have to worry about going hungry. I didn’t like to eat food prepared by other people—I was afraid I would taste their emotions—so I learned to cook the food provided by the county. It was largely frozen, prepared in bulk. Salad was a sturdy iceberg with sliced carrot slaw; the ground beef came in a fat tube. The group home kitchen, with all its canned food, and dates on plastic containers, resembled a bunker in the Midwest, as if we were all preparing for the apocalypse.

Only, for us, the explosions had already happened. The places we’d called home had been lit up and burned to the ground, with nothing left save for the blackened foundations of our past. We kids were screaming for love, for touch, for home. But we found ourselves in limbo, guarding our hearts, biding our time before the Unknown, waiting to see where we would end up. In that place of permanent temporariness, food was the only thing we had some control over; the rest was all court dates and social workers and group therapy and anger management.

It was there that I became a numbered girl. No longer Melissa, or Missy, or Missy Ann, or a girl who preferred the name Randy or Andy, but a girl with a case number, a file, a social worker, and a court date.

Hunting season didn’t begin when I became a numbered girl. Hunting season began way back in the sixties when my family bought property in the US, and earned paychecks. Then again when we moved to LA in the eighties and I tested as a gifted child in my class, when I began competing against the Joneses’ child, competing and surpassing, being noticed. It was at this time that I started hearing about “deadbeat dads” on talk shows, and getting called to the front of the class for lunch tickets. Just me and sometimes one other poor child. This is when the lights were cut off; this is when the collectors started calling.

Or, to my child’s mind, that’s how it seemed—not coincidence, but some grand conspiracy. I felt that my classmates—girls with names like Cindy and Sara with bright shiny shoes, whose daddies owned the businesses Ma and I begged at—were all in on some secret my family wasn’t privy to. I’d look longingly at my white friends’ granola, brown rice, and multigrain bread. Trips to the grocery store were always loaded with feelings of shame and desire. Fresh produce was the most extravagant, exotic thing on the shelves, even though it was my people that had picked it in the Central Valley. I feared I would taste the sweat and tears of a cousin or the impatient plucking of a woman who wanted to get home to watch soap operas.

Even though the food of my youth was largely county food, I also had my fill of food in foster care. Dry chicken dinners. Water. Salad. Three-course meals. Yet it tasted hollow, as if it had a hole in it or was seasoned with longing. Longing was not a feeling I could afford to have.

This has been the cruel irony of America to me: it is the place of dreams, yet to long for anything in this country is to be an object of shame and repulsion. Because our fathers who joined the military were half-lost to the violence they were sent to commit in other countries, or to the women they sought comfort from, or men, or to the booze or drugs, or to the new and unburdened lives… because of all that, army brats like me stood beside our then-single mothers in line at the supermarkets, arguing with the cashier about the high cost of our groceries. And when the Man handed over our food stamps, we were called moochers, a drain on our country. It’s no different now—worse even, as those people on the Hill try to pass a bill that would make people earn their food stamps. Tacking on work requirements—implying that foster kids are too lazy to pay for their own food, that mothers like mine, whose husbands went off to serve and never came back quite the same, are just not trying hard enough to make ends meet.

I don’t know how I got so lucky to be here today. Most likely, it has everything to do with the help I got along the way: treatment through Medi-Cal from the county, my Ma’s food stamps, the affordable housing, the books—all those books (from libraries and teachers and charities and every saved penny from my paychecks). The generosity and kindness and mercy of everyday people. Today, I get to live like there’s time. I long. I plan. I have the pleasure of walking to the farmer’s market and inhaling the bright scent of the peaches and plums. Like a mama hen, I pluck produce and jam, olive oil, hummus. I turn brown eggs over up beside my ear and listen to their yolks. I let the juice from fresh fruit break open in my mouth. I tell my wife that I’m cooking L-O-V-E for dinner.

But sometimes, I feel that familiar feeling—as though I’m under attack. It’s that same threat that pervaded my childhood, from a small but powerful group of people demanding tax cuts for themselves and taking away what little everyone else has. They are The Hunters. When I hear about millions of people losing access to food stamps, and children no longer able to eat those free lunches I had the luxury of hating; when I hear about a young man, not unlike all the young men I knew, getting shot in the street, or when there’s talk of a wall being built, or when my media stream fills with the sound of children crying out for their parents, that distinct wail that only a broken-hearted child can make… it’s then that I reach for the food of my youth. Corned-beef hash. Spam. Fried Bologna sandwiches. It’s a conversation I’ve been having in my head with America, the one where I’m told I’m bad and I believe it, just long enough that I have to prepare for the end of the world.

Melissa Chadburn is a contributing editor for the Economic Hardship Reporting Projectand an editor-at-large for Dame Magazine. Her first novel, A Tiny Upward Shove, is forthcoming. (February 2018)