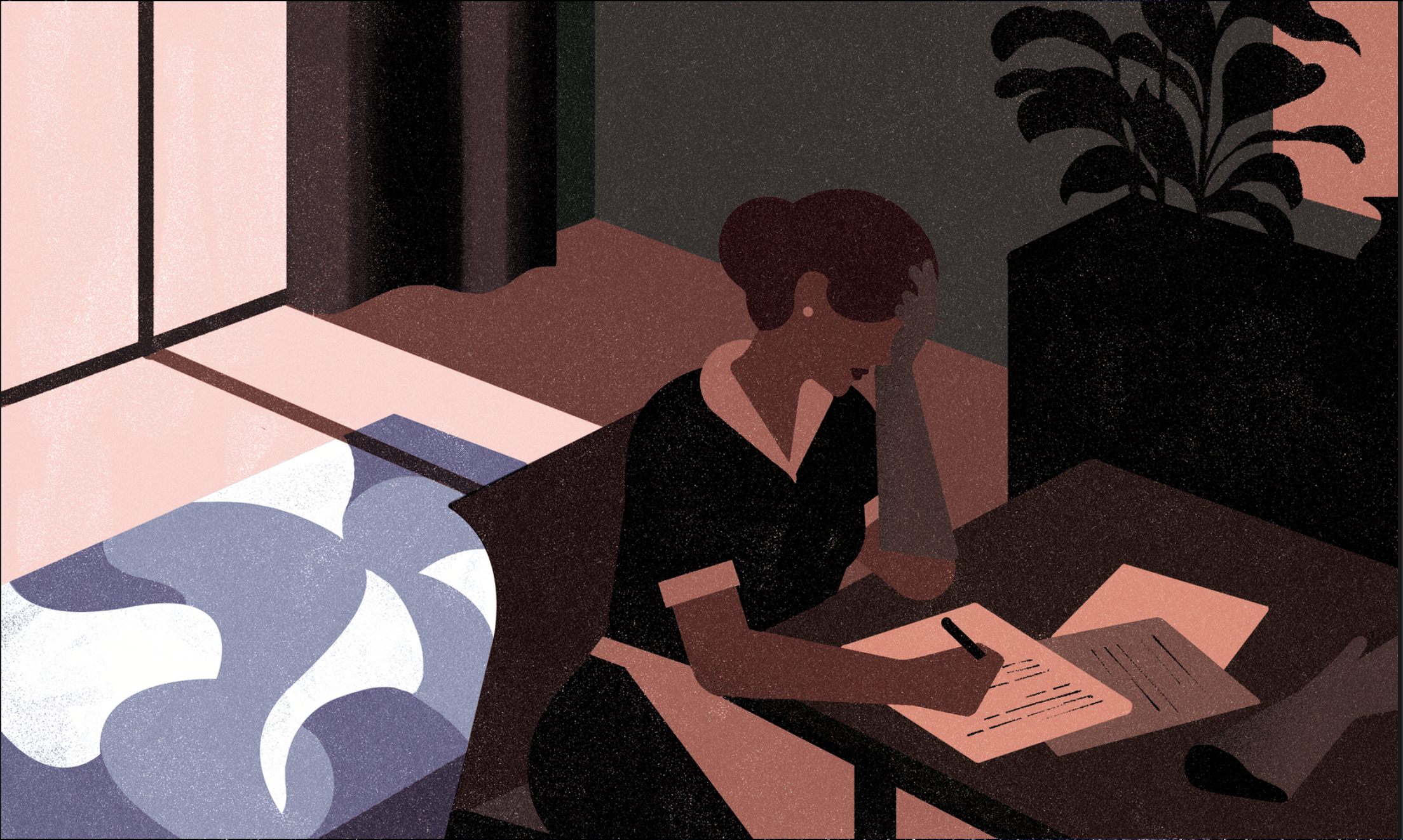 ‘That fear of being singled out never left me; I wore it like a weighted vest.’ Illustration by Andrea Mongia for the Guardian
Inequality

Why I Came Out as Being Poor

For nearly a decade, I thought it was obvious that I was poor.

Cashiers saw me and knew, without asking, that I’d pay for my groceries with food stamps. My car was always the oldest in the parking lot when I brought my daughter to ballet classes – the family there by scholarship, by the good graces of the owners. I sat on the entryway benches with all the other moms, listening to them complain about their husbands working so much. “I’m practically a single mom,” they’d say, exasperated. I clenched my jaw and stared at the floor.

Every Friday afternoon my kindergartener’s backpack was filled with free food for the weekend. The local parent-teacher association always had an in-depth discussion over what to include. I didn’t tell them that I knew, firsthand, that the granola bars were inedible; I didn’t want to make the other parents uncomfortable knowing there was a “food bag” recipient in the room.

That fear of being singled out never left me; I wore it like a weighted vest. I felt the stigma of poverty every hour, even in my own home, but I never admitted to friends how desperate my situation was.

I stared potential landlords down with a seven-year-old standing next to me and a baby on my hip, asking to apply for a tiny studio apartment I could barely afford. I spoke to a dozen secretaries at local churches, asking if they had funds to help me pay for childcare. I went hungry and bounced checks to order pizza for dinner.

Struggling to take care of my daughter on my own, I needed whatever government assistance I qualified for – a few hundred bucks a month in food stamps, free school lunches, childcare vouchers and coupons for milk and cheese – while I simultaneously worked as a maid, juggling 10 clients between going to class to put myself through college. Very few of my friends knew. They didn’t know the work I put into finding these resources – hours on the phone, standing in line, handing over thick packets to prove my need.

These food stamps, coupons and vouchers were not resources the public deemed vital to my survival. They were handouts, donations – alms. We call aid programs “entitlements” but, for those who depend on them, they feel less like rights and more like privileges given, or yanked away, at the caprices of a cold and unsympathetic state. The hours I spent applying for food stamps, Medicaid and childcare vouchers became akin to begging.

When I saw the letter of acceptance for Snap – the Supplemental Nutrition Assistance Program, popularly known as food stamps – it was a moment of gratitude, and brief catharsis and relief. Still, I knew it wasn’t a socially acceptable means to feed my family with. I saw the memes friends posted, chastising people on welfare.

One friend who worked as a grocery store clerk (paid $7.25 an hour and unchanged since 2009) took it upon herself to list the junk food people bought with their Electronic Benefits Transfer (EBT) cards, the debit cards used to pay with food stamps: “Funyuns? On food stamps? Really?”

During this time, the government proposed legislation limiting who qualified for government assistanceand attempted, in the process, to further stigmatize those already using benefits. We were accused of buying junk food, lobsters, steaks.

Meanwhile, another acquaintance shared a letter to the editor written by a man proclaiming that people on food stamps should be sterilized and given bags of beans, rice and powdered milk.

Eventually, I made my way out of poverty.

After I sank deep into debt to get a bachelor’s degree in English, I stubbornly held myself accountable to it. Maybe because I felt obtaining a higher education was a privilege I couldn’t afford, and that the debt affected not only my future, but my daughters.

This hindsight made me work harder than ever, late into the night, from home and with a baby sleeping on my lap. Gone were the days of cleaning houses. I put my degree to as much work as possible as a freelance writer. Even if it meant filling content for a local events calendar, technically I was getting paid to write words. These gigs gradually grew into ones with paychecks bigger than I’d had in years. I carried myself like a professional, even stood a little taller.

Cashiers didn’t assume I would pay with food stamps as much anymore, but those days burned bright in my memory. I began to think that, maybe if I wrote pieces about the battles people in poverty face, it would cause others to share their stories.

The prospect of publicly admitting my economic struggle to make ends meet meant gnawing on my fingernails the morning an article was published. By disclosing that I needed government assistance, I thought I’d open myself up to scrutiny in every social interaction. Now it felt as if there was a “welfare” label hanging over me, flashing like a neon sign. Would my friends judge me for joining them for lunch? If they saw me out on a rare dinner date? Would I be chastised for wasting money on a babysitter? I felt like what most people considered self-care was, for me, indulgent and even selfish.

Seeing my words – “I’m on food stamps” – out there for everyone to read made me sink a little into the floor. “Serves you right for getting an English degree,” one commenter remarked. But he just read this in a nationally respected publication, I thought. Still, the comments perpetuated the feeling that I was undeserving of most things, even a college education.

Most people don’t see themselves as sitting on that bottom rung as a defense mechanism. The more they blame poor people for their poverty, the further they feel from being in the same place. Even the working poor who qualify for food, childcare and housing benefits don’t see themselves as such. Pull yourself up by your bootstraps! They see their situation as temporary.

This creates a boundary around what people will do, how much they are willing to swallow their pride, to ask for help. Some might borrow money from family, or ask to move their wife and children into an apartment over their parents’ garage. Others will ask friends for donations or their church congregations for offerings. But some, like me, didn’t have this cushion under them, and I think it’s hard for people to realize how much that invisible place to land is a huge privilege when you find yourself falling into depths you weren’t able to plan for.

The system is designed not to wean people off public assistance but to trap them instead, a phenomenon called the “benefits cliff” or “welfare cliff”. I was told several times that $100 a month too much in wages kept me from receiving five times that in benefits. There aren’t any gray areas – you either qualify or you don’t.

In working your way off government assistance, the safety net disappears. A 2014 report from the Illinois Policy Institute discovered a higher earned income “would have to be approximately triple before [a] single parent can make up the difference”. The system is designed to keep minimum-wage workers who are just under full-time status barely afloat. A 50 cent an hour raise could mean a loss of childcare funds, and families who thought they were moving their way up the ladder can find themselves once again falling to the ground. In some states, welfare recipients aren’t allowed to save money – even a couple thousand in the bank disqualifies you.

Most legislators and average voters don’t see what a huge gap those on assistance must successfully soar across in order to get to the other side. This is not laziness. It’s the consequence of being set up to fail. But as I began writing candidly about my life, I tried to show people that anyone could find themselves in a situation where safety net programs became their last option.

Anyone could get laid off; anyone could have their hours cut, and feel their stomach lurch as they watch their wages drop; anyone could encounter a medical emergency that clears their life’s savings in a matter of weeks and leaves them with punishing debt.

After publishing that first article, a surprising amount of comments and messages came from others who admitted to the same feeling of living life over a great chasm with only a wobbly suspension bridge to keep you from falling. They admitted to the same head-spinning fear of any movement, any upset, any wrong step could plunge one’s foot between the slats of the bridge.

For people in poverty, every day is like that. Yet they are expected to live this way while being told to work harder. What they need to hear instead is: “It’s okay to sit down for a second, you deserve some rest.”

Stephanie Land is the author of Maid: Hard Work, Low Pay, and a Mother’s Will to Survive, out in January 2019.