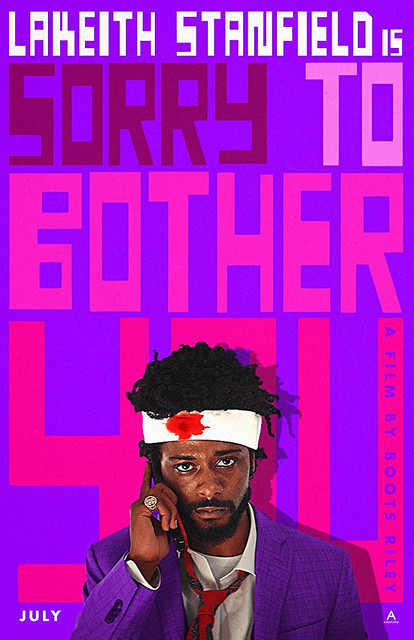 Hysterical surrealism? A pop culture for our age of economic insecurity

Critics – and people at dinner parties – like to remark how dystopian television shows such as The Handmaid’s Tale or Black Mirror offer the sharpest reflections of our grim times.

I think there is a genre that better fits our age of Trump and Brexit, of debt and overwork, of limited healthcare and housing. It’s a sort of madcap pop that seeks to represent inequality through exuberant weirdness. I call it “hysterical surrealism”.

Sorry to Bother You is a scathing dark comedy set in contemporary Oakland. The movie’s protagonist, Cassius “Cash” Green (Lakeith Stanfield), is broke and living in the garage of his uncle, himself facing foreclosure and debt. Besides his beautiful artist girlfriend, Detroit, there isn’t much joy in Cash’s life. Unemployed and rudderless, seeking escape, Cash watches ads on television for Worry Free, a cross between debtors’ prison and Amazon – voluntary slavery that takes advantage of people’s indigence, paying their bills, food and lodging in exchange for a lifetime work contract. Cash considers their pitch, but chooses to resolve his poverty in a more conventional way, as a telemarketer.

When he starts cold-calling for the company RegalView, Cash, who is black, discovers he has a strange gift: he can do a “white voice”. This Caucasian inflection helps him “powercall” all the better, allowing him to pay off his debts and rise in the ranks and arrive with surreal speed in mysterious offices and a mansion, both full of extreme wealth and decadence. Meanwhile, he disappoints and alienates Detroit, and gets to know more than he wants about Worry Free, which turns out to be one of the telemarketing company’s biggest customers.

Cash’s telemarketing white voice is supplied by another actor (David Cross), to an otherworldly effect. When Cash works as a caller, we see him magically crash into the living rooms or bathrooms of the strangers he is calling across the country, in madcap sequences.

Cash’s girlfriend’s performance art involves her half-naked in sunglasses pelted with balloons full of sheep’s blood. When Cash is hit on the head and bloodied by a protester’s Coke can, this painful incident quickly turns into a hallucinatory viral video. The film’s shooting style is also irrationally exuberant: the cinematographer pushed “the color saturation and the contrast”, he has said.

The film’s director, Boots Riley, is a black self-proclaimed communist and headliner for the long-lived Oakland radical hip-hop act the Coup (sample lyric: “Spread around the wealth as if it were a vicious rumor”). What courses through Sorry to Bother You is a fear of bottoming out and of the actuality of a failed society. Yet the result manifests in a kind of exhilaration. Sorry to Bother You seems to say: When you have nothing left to lose, you might as well take a leap.

The register is manic horror-comedy rather than depressively dystopian. I’ve noticed the same tone in other works, including contemporary poetry about inequality and market ruin. Consider this verse from poet Randall Mann: “I’m paid to multitask, / scramble the life / out of fun: / Monday I will ask you – / every dash a loaded gun.” And this, from poet Camille Guthrie: “Ah me! I find myself middle-aged divorced lost / In the forest dark of my failures mortgage / & slack breasts.”

There’s also a whole subgenre of foreclosure art. Edgar Martins’ photography series This Is Not a House features horror-movie-like images of houses abandoned after the 2008 recession. The Portuguese photographer depicts suburban dwellings at their most uncanny. Their wood floors are strewn with leaves – the outside turned in, the world turned upside down. One photo shows a stop sign in a cul-de-sac, long fallen down: perhaps, as the picture suggests, there is no stopping our destruction by capital.

The strange beauty of oxidized walls is punk and also queasily romantic, or gothic. Sure, it may be grotesque slumming, but these images allow us to see time’s passage, sped up. They act as premonition of future calamity – a memento-mori-style reminder of how quickly our buildings and landscapes can come to resemble the ruins of antiquity.

This same uncomfortable quality sometimes shows up in John Oliver’s Last Week Tonight. In one episode, Oliver creates a company called Central Asset Recovery Professionals (Carp, after the bottom-feeding fish and perhaps also a play on Tarp, the bank rescue program) to buy $14.9m worth of medical debt. It costs under $60,000. Then, with a histrionic backdrop replete with an enormous red button, confetti and strobe lights, Oliver forgives the debt.

“Essentially, student debt is like HPV,” Oliver tells viewers in an episode on student debt. “If you go to college, you’re almost certainly going to get it. And if you do, it will follow you for the rest of your life.” He takes lenders to task for their unsavory practices, casting these monetary predators as creatures from the deep. The game show Paid Off, in which contestants vie to have their student loans paid, takes a similar, harshly satirical tack.

Roughly 80% of Americans are in debt; US households now owe a collective $13.15tn in debt (including $931bn in credit card debt). Most of these people have done nothing wrong: they have simply lived and sought educations. Rather than a sign of fecklessness or individual moral failure, our collective debt is a cloud over all of us – and a natural corollary of American income inequality, which is among the worst in the world.

Living with debt and economic insecurity is living on the edge. One can either be buoyed by the manic intensity of existing on literally borrowed time or ground down and depressed by one’s debt. Much of today’s debt culture chooses the former. (You can add the many seasons of Breaking Bad as a precursor to these hysterical comedy-horror shows about money, or Zadie Smith’s 2012 novel NW, where Smith writes of her main character’s “unpaid, growing debt. Along with a feeling of resentment: what was the purpose of preparing for a life never intended for her?”)

Indeed, living through our age, I can’t help thinking back on my favorite novels, which almost always circulate around economic instability. Any classic you read as a teenager, or because you were forced to do so in literature class, may well be on the list of the debt-centered or destitution-driven: Vanity Fair, Madame Bovary, Crime and Punishment, the play The Cherry Orchard – and my most beloved novel, Edith Wharton’s The House of Mirth. The heroine Lily Bart’s initial “credit” is her beauty. By the end of the novel she descends into poverty. She packs her few gowns and writes a check to pay back her last debt, then takes an overdose of her favorite drug, laudanum, to ease her shame, and dies. “She lay very still, waiting with a sensuous pleasure for the first effects of the soporific. She knew in advance what form they would take …”

Of course, money is not simply money in these works. As Margaret Atwood has written, throughout literature, borrowing and lending are metaphors, describing our indebtedness to other humans or even to God.

But today’s hysterical surrealist culture about inequality is different from these classics, partially because debt-laden characters are entirely ordinary and don’t fit the old debt-as-sin trope – they aren’t the gamblers, “fallen women”, or entitled orchard owners we might have encountered in cultural productions of the past. Now almost everyone owes.

But we aren’t simply trapped in an overdetermined bleak dystopia where we know that terrible things can happen. Instead, we are in a giddy, chaotic, surrealist, pop nightmare where anything can happen.

Sorry to Bother You ends with its most extreme surrealist moment yet. Those on the bottom rung are literally turned into workhorses by a special potion proffered by the corporate 1%. (The horse-men are a displacement of the real non-humans taking over our jobs: robots.)

In contrast to Handmaiden-ish television shows and films of the dystopian genre, however, Sorry to Bother You ends with a surprisingly optimistic notion: that all this dehumanization might be overturned through solidarity among workers.

Creditors, bankers and college administrators have turned Americans into an economically squeezed people without free will, an army of automatons shackled by our invisible financial burdens. Yet some of us are starting to fight back – through worker organizations, or by voting for candidates aligned with the precarious classes, which include most of us. Some of us have even engaged in student debt strikes.

If the storylines of these new cultural offerings provide any instruction, it is that we can’t retreat.