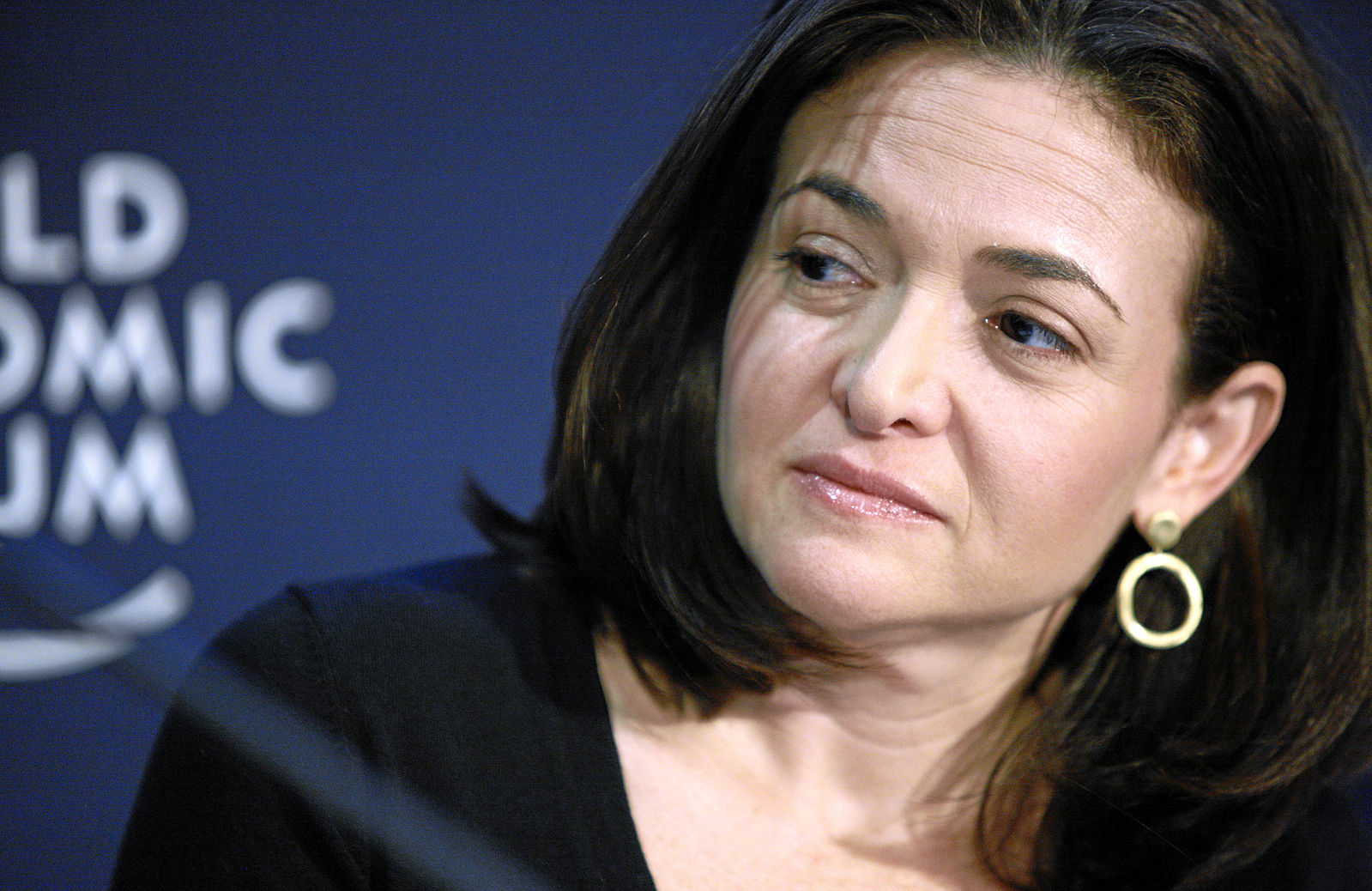 Corporate-Feminist Self-Help Was Always A Scam

Last week, Facebook COO Sheryl Sandberg was revealed in an exposé in the New York Times to be the kind of scheming, amoral corporate defender that we’re used to seeing mainly as a movie villain. The explosive piece detailing the social-media behemoth’s role in disseminating actual fake news in the run-up to the 2016 presidential election included the revelation that Sandberg had covered for the firm as it, among other ethical offenses, employed a Republican opposition-research that used the time-honored anti-Semitic dog whistle “George Soros” as a way to undermine efforts to hold Facebook accountable. The breaking news led some to wonder: How could this be the same woman who wrote 2013’s corporate-feminist manifesto Lean In, who referred to herself as a “pom-pom girl for feminism” and saw herself as the leader of a “social movement” devoted to helping women assert their worth in a corporate culture that’s never made allowances for the realities of women’s lives?

But the connection between Sandberg the concealer and Sandberg the corporate feminist is no accident. There is a clear link between the bestseller that hectored women to demand more from and for themselves in the workplace and the Facebook executive who ignored warnings about disinformation campaigns infiltrating the network, put people’s information at risk, and then complained about being criticized. Indeed, Sandberg could even be said to embody a type: the gender traitor who works tirelessly on behalf of systems built to exclude, marginalize, and imperil other women. Though the term was coined in The Handmaid’s Tale as Gilead’s justification for the exile and punishment of queer women, the contemporary gender traitor is ultimately faithful not to her fellow women, but to her class status and her fellow corporate titans. At the pinnacle of America’s elite, Sandberg has thrived—but, make no mistake, she herself is a handmaiden.

Sandberg isn’t the only bestselling writer whose malfeasance has recently come to light and, in the process, underlined the connection between motivational advice and questionable real-world politics and professional behavior. The outpouring of news surrounding Brett Kavanaugh’s confirmation hearing and Christine Blasey Ford’s accusations against him in September included revelations about Yale Law School professor Amy Chua, author of the controversial 2011 parenting tome Battle Hymn of the Tiger Mother. Chua, along with her husband, allegedly advised female students interested in clerking for Kavanaugh to be as alluring as possible, and told potential male clerks that Kavanaugh preferred pretty female clerks.

Both Chua and Sandberg are enthusiastic members of the legal and corporate mega-elite, but the advice in their books was directed at the same ordinary, ambitious women they were willing to sacrifice in their private and professional activities. One fomented self-doubt in female professionals: “I continue to be alarmed not just at how we as women fail to put ourselves forward, but also at how we fail to notice and correct for this gap,” chastised Lean In. The other planted the seeds of self-loathing in mothers: “A lot of people wonder how Chinese parents raise such stereotypically successful kids. They wonder what these parents do to produce so many math whizzes and music prodigies,” wrote Chua. “Well, I can tell them, because I’ve done it.”

But both books said little about the very possible consequences of following their advice—nothing about the way that leaning into hostile workplaces brands women “troublemakers” and gets them fired, nothing about the fact that Tiger Mothering their children without Chua’s social and financial advantages was more likely to result in angry, resentful kids than in piano prodigies. And yet these architects of female self-doubt masquerading as self-help have not simply sold women a lie, but put them in actual danger, whether it’s compromising the security of political dissidents, or serving the political and personal interests of a compromised Supreme Court judge.

This class of gender traitor is faithful to success itself without acknowledging that success in a country with such limited class mobility isn’t generally the result of speaking up in the conference room or making your kids do hours of math drills every night so much as it is the product of wealth, skin color, access, and a slew of related advantages. They tell their female readers that success requires working within corporate or political structures rather than making attempts to change them. (The goal of childhood “success” that Tiger Mother trafficked in had everything to do with mastery of musical instruments or math, but little to do with self-actualization and the psychological toll of forced “enrichment” of kids, a subject on which I’ve also written.) There is no systemic critique in their books or most of the books like theirs: in fact, these sorts of popular works are anti-systemic critique. But that’s exactly what we need.

Both Sandberg and Chua made themselves household names by, intentionally or not, exploiting the fact that so many Americans are like dogs chasing their tails, unable to figure out why they can’t pay their bills (wages are stagnating) or why their kids aren’t getting into good colleges (they may well be blocked by an unholy percentage of legacy admittees).  Needless to say, these particular obstacles don’t afflict Sandberg-esque purveyors of advice. Chua attended and teaches at Yale Law School, as does her husband (their daughter also attended); Sandberg graduated from Harvard. Their children are always a
lready ahead of others.

“I believe that if more women lean in, we can change the power structure of our world and expand opportunities,” wrote Sandberg. Of course, she didn’t offer a convincing outline of how that might happen. Her book and Chua’s align with the sort of ideological content that has tainted self-help books aimed at women for generations: The genre, from Dr. Laura to Goop to the many books promising happiness or well-being, often simplify, muddle, or just elide the realities of parenting and work and relationships.

Thirty years ago, in For Her Own Good: Two Centuries of the Experts’ Advice to Women, Barbara Ehrenreich and Deirdre English wrote of the insidious power of self-help advice, “The relationship between women and the experts was not unlike conventional relationships between women and men. The experts wooed their female constituency, promising the “right” and scientific way to live…. It was never an equal relationship, for the experts’ authority rested on the denial or destruction of women’s autonomous sources of knowledge: the old networks of skill-sharing, the accumulated lore of generations of mothers…” Such books, which ranged from dour and self-serious to perky pabulum, were the output of what Ehrenreich and English called “a masculinist society, dressed up as objective truth.”

The dozens of women I interviewed about their families and finances over the last few years in the course of writing about economic precarity didn’t identify with lean-in ladies or Tiger Mothers. Rather, the story unfolding in millions of households as you read this is the end of the dream of the middle class among those who’d been promised that financial and personal success was available to anyone who worked hard for it. When some of the women I spoke to tried to “lean in,” they in fact “leaned over” into joblessness, far from patrimonial capitalism. When working-class icon Dolly Parton was asked in a 2014 Billboard interview, what she thought of Sandberg’s book, she responded: “I’ve leaned over. I’ve leaned forward. I don’t know what ‘leaned in’ is.” The half-employed lawyers consumed with resentment as they tottered under their student-loan bills, the workers experiencing pregnancy discrimination, the retail workers forced to work shifts that made seeing their kids every day impossible—they were leaning over.

The self-focused exhortations of Lean In and Battle Hymn of The Tiger Mother were not unaware of the truth of American life: Anyone who has reached the upper echelons of business and academia certainly know the game, for women, is rigged. And Sandberg and Chua may well believe their own propaganda, despite occasionally issuing attempt mild corrections and mea culpas, as when a recently widowed Sandberg admitted to having overlooked the challenges of single motherhood. And a she-devil’s advocate might ask: Aren’t these women just two canny self-promoters in a system already gone mad long ago? Isn’t Facebook itself a far bigger problem?

These things are true. What sticks with me, though, is that while Chua and Sandberg knew exactly where real power resided in America, they filled millions of women’s heads with the idea that they could easily get a greater share of that power and security if they simply tried harder—and if they didn’t succeed, well, it was their own fault. The responsibility for our survival in this country is laid at our own feet. We might also question the atmosphere of acceptance that greeted this sort of one-percent feminism, and that softened the ground for the rise of this sort of unsavory advice-mongering.

What we need most, of course, is an understanding that individual success and transformative cultural, social, and economic change are not the same thing. I’m still waiting for that kind of self-help book—let’s call it What To Expect When You’re Expecting Revolution.

Alissa Quart is the executive editor of the Economic Hardship Reporting Project and co-founder of its present incarnation. She is the author of the recent book Squeezed: Why Our Families Can’t Afford America (Ecco/HarperCollins) and four other books, including Branded, Hothouse Kids, and the poetry book Monetized.