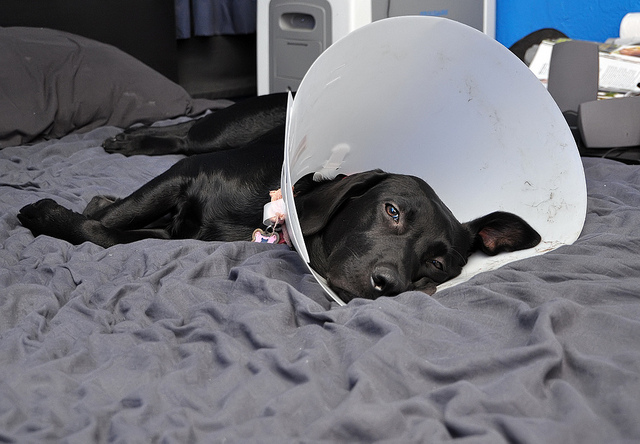 The Worst Part of Being Poor: Watching your Dog Die When You Can’t Afford to Help

A few years ago, my sister Marylin’s peekapoo – a playful and affectionate dog named Oreo – went to the vet for minor bleeding in her mouth. Any issue involving blood is always of concern, but Oreo was only eight and in otherwise good health so it wasn’t alarming. Maybe she had eaten something that had irritated her digestive system, we had assumed.

The vet prescribed Rimadyl, an anti-inflammatory medication often prescribed for arthritis and other conditions.

Within a few hours, Oreo’s condition only worsened. She couldn’t eat, and was obviously in distress. From there, things got alarming. She became disoriented, unable to stand or walk without falling. Then hemorrhaging started. Yet the cause of her sudden decline proved a mystery.

We called local vets, hunting for one that could see her right away. That’s when we discovered a cruel fact of life for pet owners of modest means. If you can’t hand over a bunch of cash immediately, you often have no way to get your pet the medical care they need. Even in the worst emergencies.

Like most animal lovers, I think you can’t put price tags on the lives of our beloved four-legged friends. Unfortunately, that’s exactly what being a poor pet owner forces you to do. My state, Pennsylvania, ranks among the most expensive for emergency veterinary medicine. If your pet has ever eaten something they shouldn’t (and whose pet hasn’t?) consider yourself lucky if it didn’t cost you a fortune. The average cost of “foreign body ingestion”, a common pet emergency, is often more than $1,500.

The American Veterinary Medical Association suggests that financially challenged pet owners talk to their veterinarian about payment plans or deferred payments, look into low-cost clinics, and check for charities that might be able to help – all of which we did, to no avail.

I’ve heard plenty of comments along the lines of: “If you’re poor, you shouldn’t get a pet.” One person in a local Facebook group – in a discussion where someone was asking about affordable vet services in the area – chimed in with his opinion that if you cannot dedicate at least $1,000 a year for vet care, you shouldn’t get a pet. Pets are yet another thing that are used by people as an excuse to poor-shame, essentially telling indigent people that they aren’t worthy of the companionship of a loving pet.

The harsh reality is, veterinary care is a business, and just like any other business, its clients must provide that revenue. But even pet owners who have the best-laid plans initially – perhaps even with a dedicated savings account for vet expenses – can run into unplanned circumstances. They can lose their jobs, experience a sudden medical crisis or any other troubled situation affecting their ability to afford vet care.

In the case of my sister, despite her poverty she was determined to have a dog and to save her when she was ill. We started by calling a few vets who had treated Oreo, thinking they’d be the most understanding. Each one explained that we would need to pay the full cost of the visit upfront, plus any necessary treatment, which they estimated to be a minimum of several hundred dollars.

Like most low-income and working-class people who live in Pennsylvania coal country, my sister and her husband live paycheck to paycheck. At that time, Marylin had been recently forced to leave her job as a cashier due to breathing difficulties (she’s now facing a double lung transplant) and her husband worked at a local furniture store.

For many months, they barely had enough to cover their bills. Coming up with hundreds of dollars on the spot proved impossible. Credit cards are also a rarity in our family due to shaky credit, no credit history or lack of sufficient income, so putting this on plastic wasn’t an option.

All this meant Oreo suffered into a second day. At this point, she was lying on the kitchen floor, wailing. It was agonizing for the whole family. My niece, Crystal, sobbed as she lay on the floor next to Oreo, trying in vain to comfort her. In despair, my sister begged the vets’ offices, and even offered to let them garnish her husband’s paychecks.

As a Hail Mary, they rushed Oreo to one local vet’s office, hoping that seeing the dog’s distress would move the staff to waive their normal payment policies given the dire situation. As Oreo bled heavily all over the waiting room floor, the staff informed my sister that they couldn’t do anything unless she could bring someone who could get approved for a credit line of at least $1,000.

Oreo, clinging to life at this point, entered the third day of suffering. She would look at you in desperation, like she was pleading with you for help. Growing increasingly listless, she barely even had the strength to whimper.

We expanded our search for a vet and called every one of them within an hour of my sister’s home, our panic growing. We weren’t even sure if Oreo would survive a car trip that long but we were determined to try.

The only emergency vet hospital within 45 minutes of us demands payment immediately when you walk in the door – before they’ll even take your pet back to the exam room – so that wasn’t an option. The immediate “just to get in the door” payment is $150, but they warn you that even just an initial round of tests could easily run you several hundred dollars or more. They can’t even give you an estimate for the total treatment cost until they do an evaluation and tests.

By this time, we had faced the ghastly reality that Oreo was probably too far gone to be saved, so we also reluctantly contemplated the idea of putting her out of her misery, despite her relatively young age and our desire to save her. However, even for euthanasia, all of the local vet offices require immediate payment at the time of service. Costs vary, but euthanasia typically can run to $200 or more.

As it approached day four, we finally found a vet more than a half-hour away who agreed to examine Oreo. They weren’t sure if there was anything they’d be able to do for her at that point, but at least they were willing to give it a try. But right after we spoke to that compassionate vet, Oreo passed away in Crystal’s arms. It was a heartbreaking end to an excruciating few days.

This spring, I had had a disheartening case of deja vu as my mother’s beloved pomeranian, Mitzi, faced health issues we couldn’t afford to treat. At 13, Mitzi had been plagued by an assortment of health problems (including food allergies) for years, but we’d been able to keep those mostly under control with a combination of treatments and a diet that we cobbled together as my mother’s budget allowed. Her only form of income was a meager social security check, but every available penny she had would go to Mitzi’s food and care.

But when Mitzi started having seizures and other signs of potential neurological maladies, I was struck by dread because I knew where this was heading. The vet informed us that the diagnostic tests alone could easily cost close to a thousand dollars. And if anything showed up, the expenses would escalate from there. Even if she could afford the tests, my mother realized it was pointless to have them done because realistically there was no way she would be able to afford any necessary treatment.

My mother is a widow whose serious health issues – including advanced Parkinson’s disease – leave her unable to leave home except for doctor’s appointments, so Mitzi served as her constant companion and a source of comfort. Still, Mom reluctantly accepted the inevitable and tried to prepare herself that Mitzi’s death was near.

Wanting to avoid a repeat of Oreo’s slow, painful death, we vowed that when it became apparent that Mitzi was in pain or her quality of life was declining, we would have her put to sleep humanely. Even that cost was beyond what my mother could scrape together at the time, but fortunately I was able to put aside enough to cover the basic costs of euthanasia.

A few weeks later, after Mitzi had a particularly bad night in which she suffered a series of seizures, I took Mitzi to the emergency vet hospital in the middle of the night to have her euthanized. It was still emotionally tough, but at least we knew she hadn’t suffered unnecessarily due to financial factors.

What can be done in other cases like Oreo’s or Mitzi’s?

Organizations like the Connecticut-based not-for-profit organization Pet Assistance can be one answer. They provide help, often in the form of advice and referrals, to longtime pet owners facing unexpected bills for emergency vet care.

Some Humane Society locations and other pet organizations offer “wellness clinics” providing free or low-cost vaccinations, spay/neuter assistance and other routine services, but these are available only in certain areas and generally don’t cover extensive procedures or emergency care.

But those options aside, why do so few veterinarians offer sliding scales to pet owners in need? Why don’t the many well-funded animal-friendly organizations establish a source of funds to help indigent pet owners cover their animals’ medical costs?

Without more available resources to help desperate pet owners, given the current state of wage stagnation more and more animals will be suffering and dying, needlessly.

Co-published with The Guardian and The Bark.