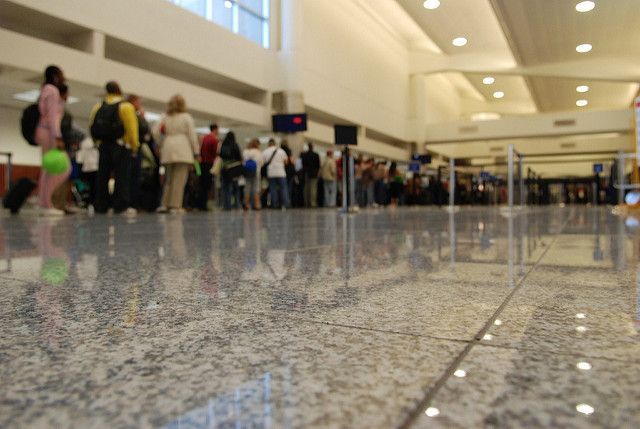 Last week, in a meeting with Democratic leaders, President Trump called the government shutdown a “strike.” This was an enigmatic use of a hallowed term, although it might have simply been Mr. Trump’s confusion about the “blue flu” epidemic afflicting employees of the Transportation Security Administration, who are working without pay and registering their protest by calling in sick, and in some cases quitting outright.

In contrast to a strike, blue flu — a condition that has also been known to afflict police officers — is a quiet form of protest, with no stated principles or claim for public attention or sympathy. At the end of the day, each worker goes home and calculates his or her ability to go another week or two — or months or years, as the president has threatened — without a paycheck and acts accordingly.

Since T.S.A. agents, who are among the most visible of the affected workers, make do on a starting wage of about $23,000 a year (with the possibility of going up to about $43,000), these can be hair-raising calculations: Skip the children’s dentist appointments and pay the electric company? Or try to get an extension on the utility bill and go without getting the car fixed?

The question is what comes next. With no end in sight for the shutdown, should the T.S.A. workers continue this passive-aggressive form of protest? Or is there something more they can do, something that would turn their plight into a stand not just against the shutdown but also against the arbitrary and insulting way American workers are so often treated in general?

T. S.A. workers should use last year’s teachers’ strikes as a model. They were called not by the leadership of the teachers’ unions but by the rank and file. It was a new kind of labor activism, starting at the bottom and depending heavily on community support. By sticking together and creating their own communication system, the teachers succeeded in sending a powerful message of solidarity and strength.

A strike by T.S.A. agents, as federal workers, would be illegal, as was the wave of public-sector strikes in the 1960s and ’70s. But this time is different, said Michael M. Oswalt, an associate professor of law at Northern Illinois University College of Law, who studies federal labor relations. “A strike over involuntary work would raise not just novel legal issues but important and unprecedented questions about the value of public service and middle-class employment in our country,” he said.

The moral foundation for a strike is unquestionably firm. The federal government has broken its contract with its employees — locking some of them out of their workplaces and expecting others to work for the mere promise of eventual pay. An even more profound principle is also at stake, namely the ban on slavery and involuntary servitude embodied in the 13th Amendment to the Constitution.

So what holds federal workers and their unions back from taking more dramatic and collective action?

Partly, it is the ghost of Patco. In 1981, the Professional Air Traffic Controllers Organization struck over wages and working conditions, prompting President Ronald Reagan to fire 11,000 highly skilled workers, replacing them with military personnel. Patco was destroyed and unions in general retreated into a defensive crouch. Who wants to risk something like that again?

It is also the unions themselves, which now hang back in fear of draining their treasuries and losing whatever influence they still have. In the case of the government shutdown, the relevant unions are focusing on bringing lawsuits against the federal government for, in effect, forcing employees to work without pay. But these suits would probably turn out to be a kind of stealth operation, something to read about years from now, once the courts decide.

This is a moment of tremendous opportunity. An unpopular president has arbitrarily plunged nearly a million families into financial jeopardy and in some cases poverty. If airport workers, for example, declare a strike, they can expect to attract fervent community support. Even travelers who have a hard time believing that the key to air safety lies in their shoes or laptop are likely to listen to the federal inspectors who have been picketing major airports with signs asking: “Was your airplane properly repaired and inspected today? The F.A.A. does not know!”

Whether rank-and-file action by T.S.A. workers and other federal employees would have the power of last year’s teachers’ strikes remains to be seen. How long would the public support it? And what about the business community, which depends so heavily on the smooth transfer of corporate travelers from one airport to another?

All we know is that the shutdown continues without a break in sight. Government employees will continue to triage their bills. Food stamp recipients will remain in doubt over whether they will be able to eat in March. Government contractors will go wringing their hands.

During his televised address last week, Mr. Trump countered these anxieties with a faux fear very far from people’s everyday concerns: the fear of murderers, rapists and drug pushers pouring in from south of the border. At some point, we’re going to have to reckon with our real problems, including the ones created by the president himself.

The time has come for a genuine, old-fashioned strike, one with picket lines, chants, quickened pulses and the power to reignite the traditional fighting spirit of American labor.

Ms. Ehrenreich is the author of “Nickel and Dimed” and the founder of the Economic Hardship Reporting Project. Mr. Stevenson is a former labor organizer.