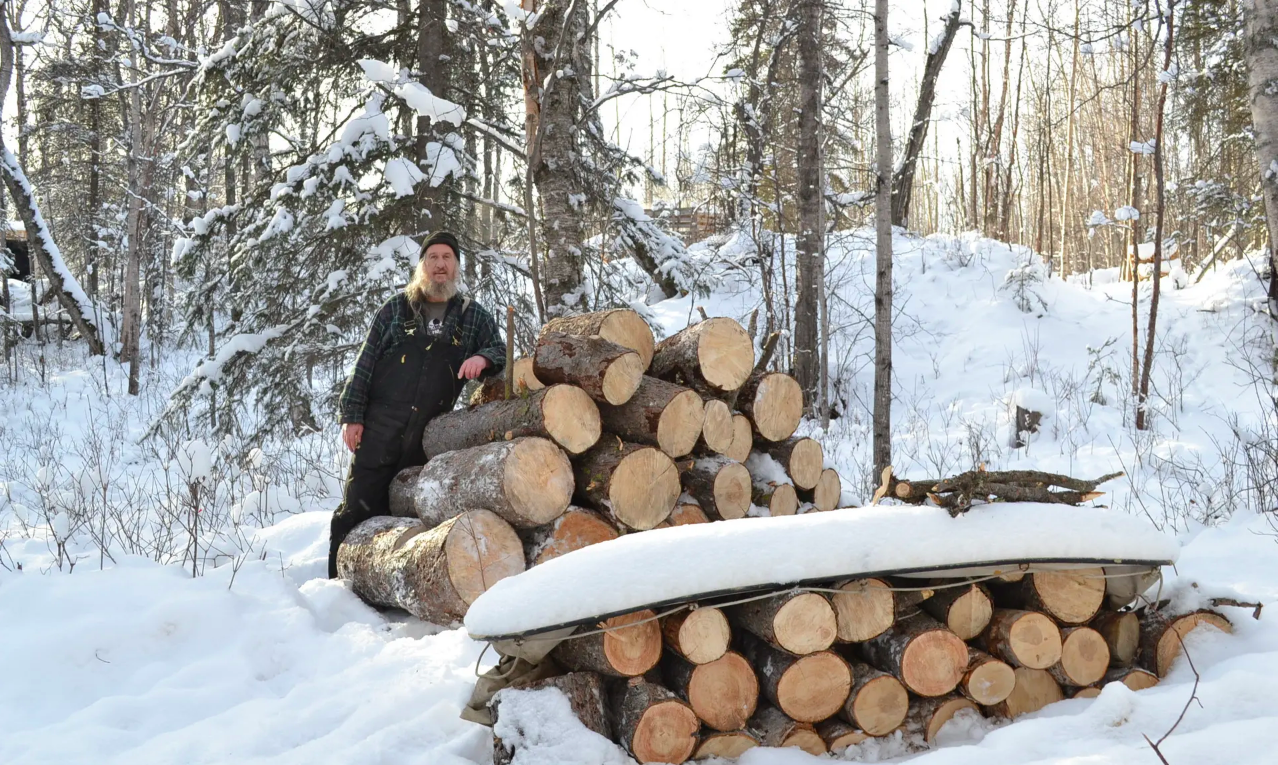 Joe Ford with a pile of wood he chopped. Photo by Joe Ford/Guardian
Housing, Living

Why I Chose to Live House-Free in Alaska

I am a 64-year-old navy veteran of the Vietnam era and houseless in the tundra, somewhere around 65 degrees north latitude. I have been scrambling around these parts since 2013, inhabiting a variety of iterations, from riverbank tent camps to cabins, buses and RVs and occasionally at fancy lodges when I have worked caretaking gigs. I live like this in protest of our consumer society. I find it more fulfilling, more authentic, less stress – on the planet and on my brain.

Feckless? Maybe. Shiftless? Probably. Irresponsible? Absolutely! But homeless? I beg to differ. Homeless implies an individual moral failure, which may indeed aptly describe one part of my character. Houseless is simply lacking a permanent three-dimensional structure.

If you have a place to gather your thoughts and lay your head at the end of the day, how is that not a home? My accommodations are substandard if a house is used as a metric. But my tent keeps me and my bedroll out of most elements in the spring, summer and as far into the fall as I can take it. I find sturdier shelter when the water I soak my false teeth in overnight freezes and I have to chisel them free before I can eat breakfast. Right now, I have a bus with a wood-burning stove in it on loan for the winter, so I’m out of the elements until spring.

This ain’t no city slickin’, shopping cart, panhandling kind of houseless. No dumpsters to dine at, no citizens to hassle for donations, no cops to dodge when you need to pee. Most days I see more wildlife than humans. I spend more time traversing dirt than pavement, more paths and game trails than roads and sidewalks. I hear more of nature’s notes than the white noise of civilization, and I can pretty much pee anywhere.

If you’re not a moron, community members are not averse to doing you favors, giving you rides or putting you to work – labor can be a barter commodity. And most of these hillbillies are packing heat anyway, so it would behoove one not to be too stupid.

In general, stupidity out here in the frozen north usually carries severe consequences: campfires in a dry forest on a windy day easily get out of control; sloppy chainsaw, axe or knife work you could lose a finger or cut into an artery and bleed out; carelessness near rivers or ice could drown you; drinking water from a polluted creek will leave you very sick. Pick berries to eat oblivious to your surroundings and you could get eaten yourself (bears like berries too).

People with a penchant for stumbling around drunk and stoned and sleeping it off curbside in the middle of the afternoon probably won’t succeed out here. Discoveries of frozen houseless people regularly make local news headlines. If these folks can’t make in an urban setting with services right around the corner, living in the woods miles from any help is not an option. 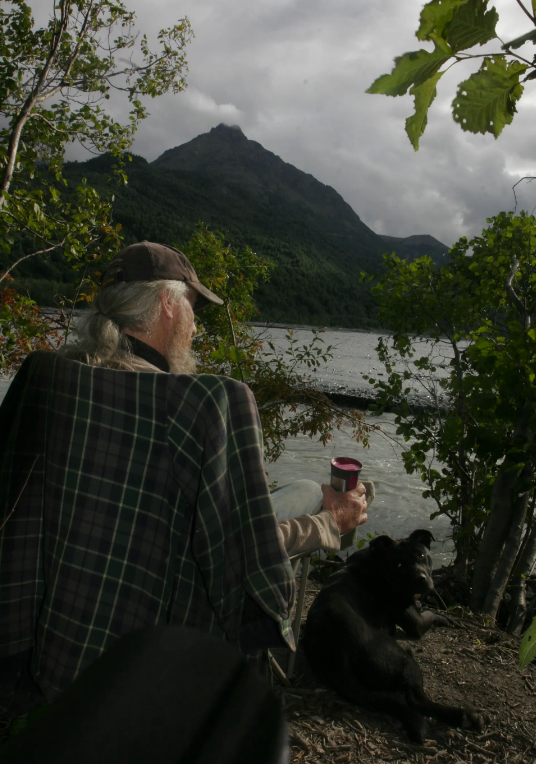 ‘I’m gonna watch a river for a while.’ Photo by Joe Ford/Guardian

I’m vague about my location. I don’t want a flock of freakin’ hobos descending on the area like an invasive species only to discover, when the weather gets real, they weren’t prepared and start dropping like the flies do on cold autumn evenings.

Hunting and gathering play a large role in the procurement of sustenance at my location. The activities reduce the degree of reliance on injected, processed, wrapped-in-plastic, crammed-into-coolers, industrialized food. We have meat on the hoof out here and I have no qualms about harvesting the resource sustainably. Plus, it’s organic. This ain’t a trophy hunt, this is food! 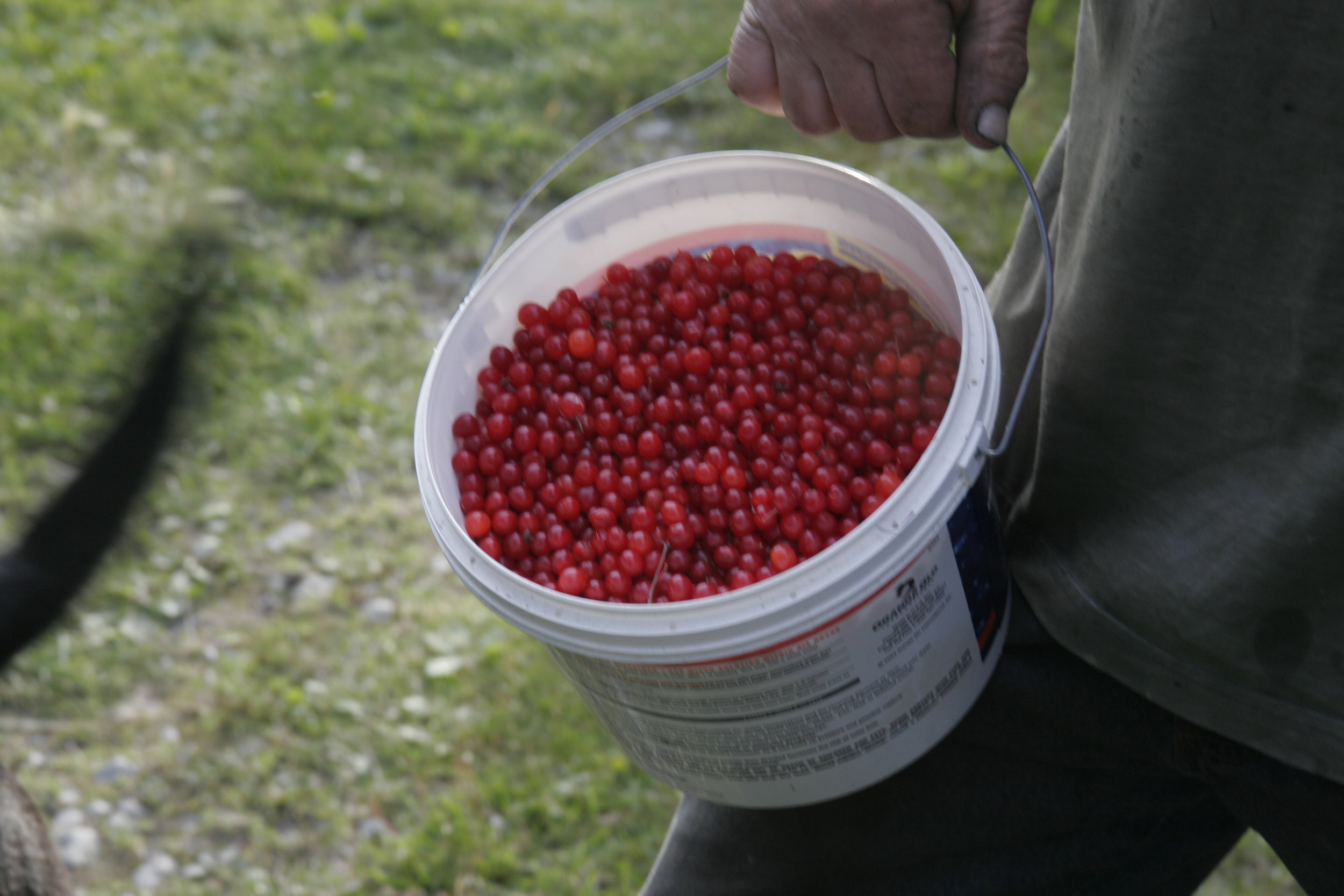 I do still have to rely on some factory food. On my monthly ride on public transportation to the local food bank 30 miles away, I’ll pick up rice, pasta, cereal and milk, some canned goods, fruit, veggies, maybe some soup plus peanut butter and welfare cheese (I hate how much I love that stuff!). I get fruit juice, too. If I add sugar and yeast to the juice it will ferment into a fairly stout libation in a matter of weeks.

All in all, though, I prefer a campfire-roasted porcupine that I killed and butchered (recently, one who had smacked my dog with his tail, embedding 15 quills in the mutt’s snout), slathered with highbush cranberry ketchup, foraged chickweed salad with mushrooms on the side, a hot cup of stinging nettle tea to wash it down and a handful of wild blueberries for dessert.

Bugs, sticks, sand and assorted forest floor debris sometimes makes it into my vittles but, as the family I encountered in my travels through Canada some years back said when I pointed out that their kid was eating dirt: “It’s clean dirt.” And the bugs are protein! Anyway, I get to devour the feast creekside watching fish sex. No, it’s not the latest Netflix series, it’s actual salmon spawning in the water 10ft from my tent.

My living room floor gets a fresh gold carpet when fall colors take over and the tree branches go bare. Daylight starts fading fast closing in on the autumnal equinox and stays in decline till winter solstice, bottoming out at around five and a half hours here. So, I use rechargeable LEDs (a gift from a friend) to read and write by and a headlamp for more active endeavors like ice fishing or splitting firewood.

My toilet is a hollow cottonwood stump and I bathe with a kettle of hot creek water. Some places along the highway offer showers but they cost money and contribute to ecocide, so I clean my crotch in the creek occasionally. But personal hygiene is not a priority. I have dirt under my fingernails, belly button lint, maybe some toejam. I often smell like wood smoke from my campfires. My cologne: eau de burnt alder. Instead of washing my clothing – layers come cheap from thrift shops – I air it out, hanging it on a tree branch for a snowstorm or two, then turn it inside out and put it back into rotation.

Cabin fever will kick in if you don’t get out and move around, especially in the winter. I have a 10-year-old laptop and a mile hike to the library gets me some wifi and a battery charge. That and a tinny rechargeable battery-operated radio capable of pulling in the nearest NPR signal which, like picking politicians, is the least of the worst, rounds out my engagement with the madness and spiritual corrosion of capitalism and the society it spawns. 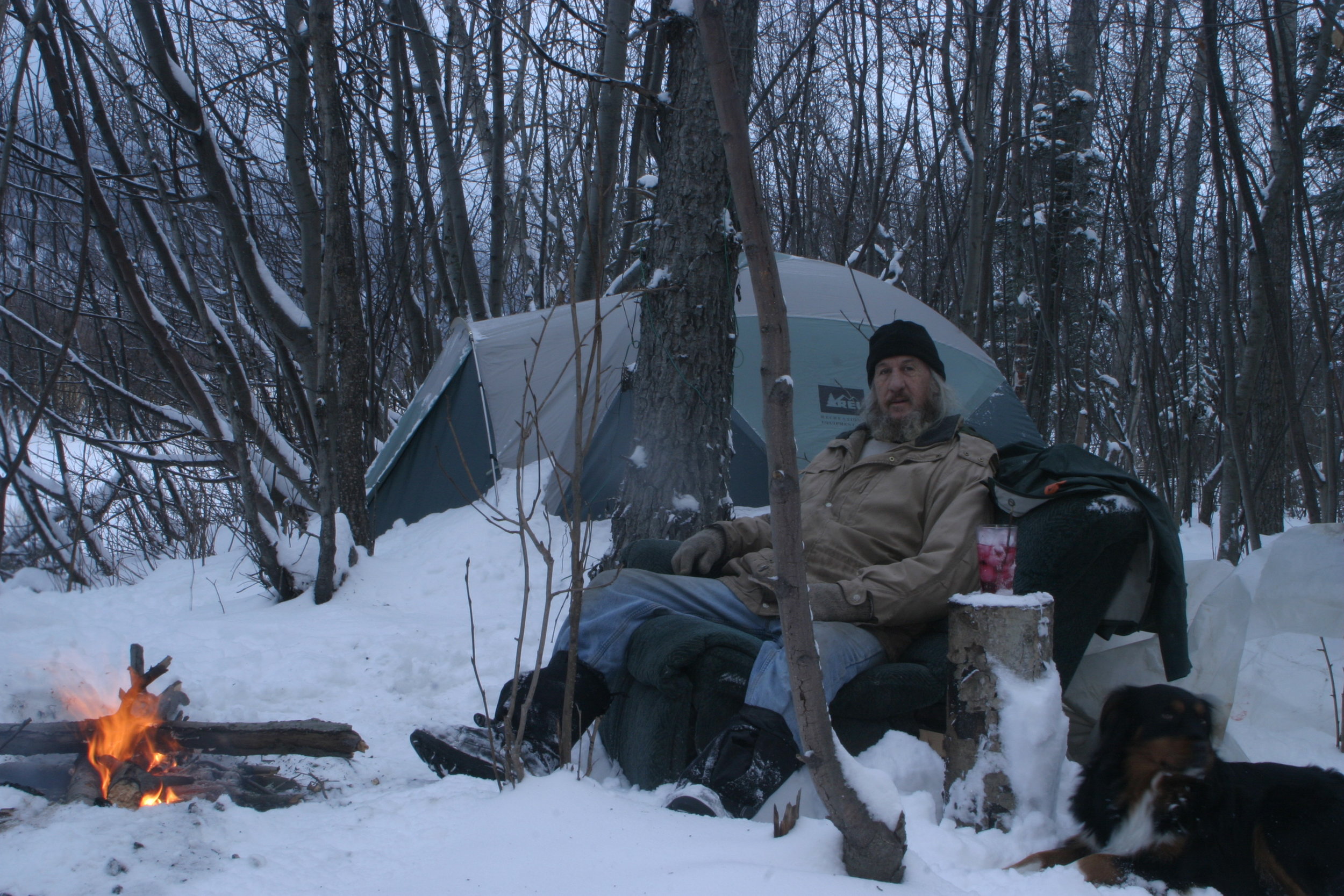 I also go hiking, snowshoeing, ice skating or cross-country skiing under a big moon. I can fall back into a snowbank with some home-grown and a pint o’ Schnapp’s and watch the northern lights or just get lost in the night sky.

Poverty can be a rough row to hoe. It has forced me to seriously compromise the lifestyle and the values I was raised to expect from my perch in a lilywhite midwestern suburb. During my lifelong descent of the economic ladder, which I attribute to my “don’t care” attitude, I got a closeup view of all the unfairness, malfeasance and destructive aspects of “the system”. I was indoctrinated into it, and have gone from struggling to fit in to rejecting the game entirely and looking for alternatives.

As a result, my carbon footprint has shrunk. My presence on this planet leaves little trace, which is how I feel it should be. While that’s pleasing to me, I also understand my withdrawal is meaningless in the grand scheme. The world needs systemic change. In my solitude and self-imposed isolation on the side of a mountain in an undisclosed location, I find it all mildly amusing.

Living on the edge of the fringe makes for an interesting experience. A bumper sticker on a four-wheeler that roared past me, destroying my zen and and shattering the stillness of the forest path I was traveling read: “If you’re not living on the edge you’re taking up too much space.” I smirk and can’t help but agree.