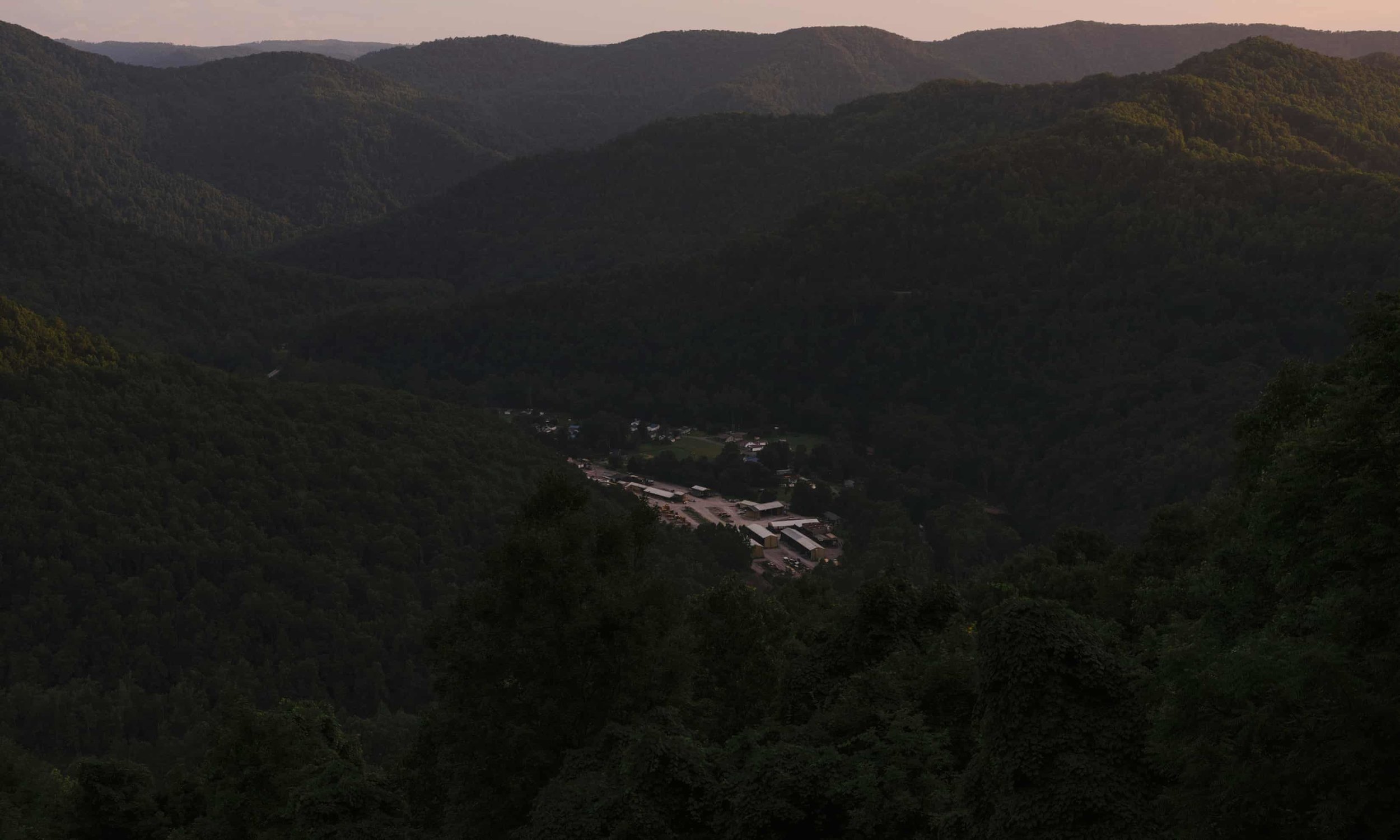 A Fierce Desire to Stay: Looking at West Virginia Through Its People’s Eyes

To render a humane portrait of West Virginia and its people is to promise disappointment. The poet Muriel Rukeyser knew this as early as 1938, interrupting her own matter-of-fact description of West Virginia’s plainness from The Book of the Dead to question her readers’ expectations: “What do you want – a cliff over a city? A foreland sloped to sea and overgrown with roses?”

If you look at Webster county on a map, you’ll see more than 500 square miles of forest nestled between rivers and mountains, and leaving the county requires a long crossing of one or the other. The county seat, Webster Springs, has just under 700 residents. The county is overwhelmingly white, and the per-capita income is just $12,284. This makes Webster county, with a median household income of $21,055, the fourth poorest county in West Virginia; 31% of residents are below the poverty line, including 40% of the county’s children. 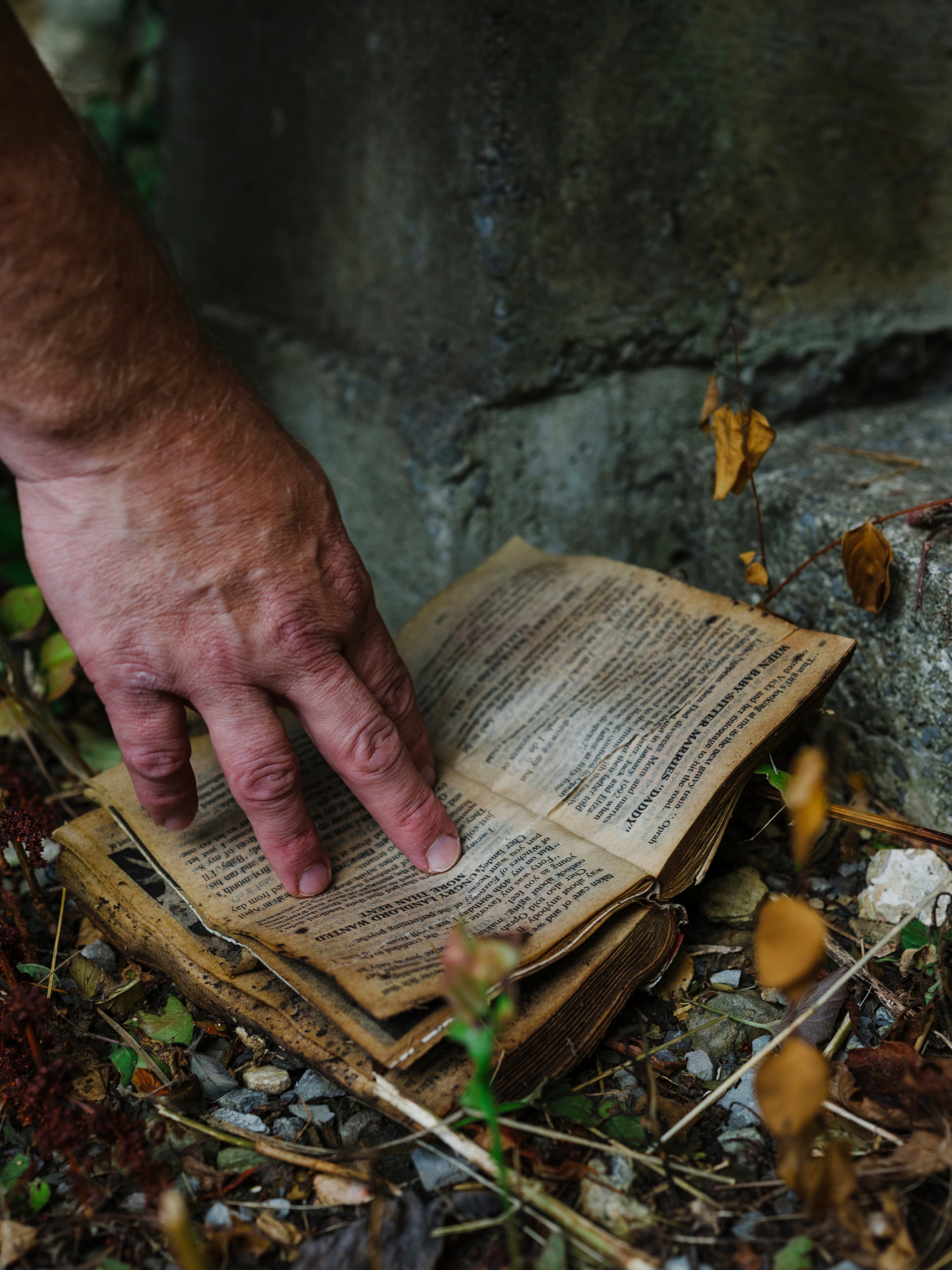 The county’s most important link to the mining industry, a surface mine owned by Arch Coal, closed in 2012 and with it went 150 jobs. Timber, however, has long been the county’s primary economic force. Over 93% of the county is forest and timber companies own more than half of all private land, providing in return seasonal employment at five area sawmills. Much of the timber harvested in Webster county is destined to become high-end furniture, the kind that mill workers and loggers can’t afford.

“They have no idea of the men and machinery, the sweat and labor, the diesel fumes and distance involved,” Van Gundy writes, imagining the consumers of Webster county’s bounty.

Timber is cleaner than coalmining, but most communities in West Virginia have faced struggles connected to the totalizing nature of the extraction economy.

They are also attempting to go against the problem of image-making in the state, which is often about capturing the idea of West Virginia rather than its complexities. The most widely circulated version of the state is one that looks like it deserves to face its own oblivion, for its politics or economy or outdated modes of existence. But what if it doesn’t look like that at all? What if it looks like ordinary things, like young love and fair weather, like clean countertops at a crowded diner? 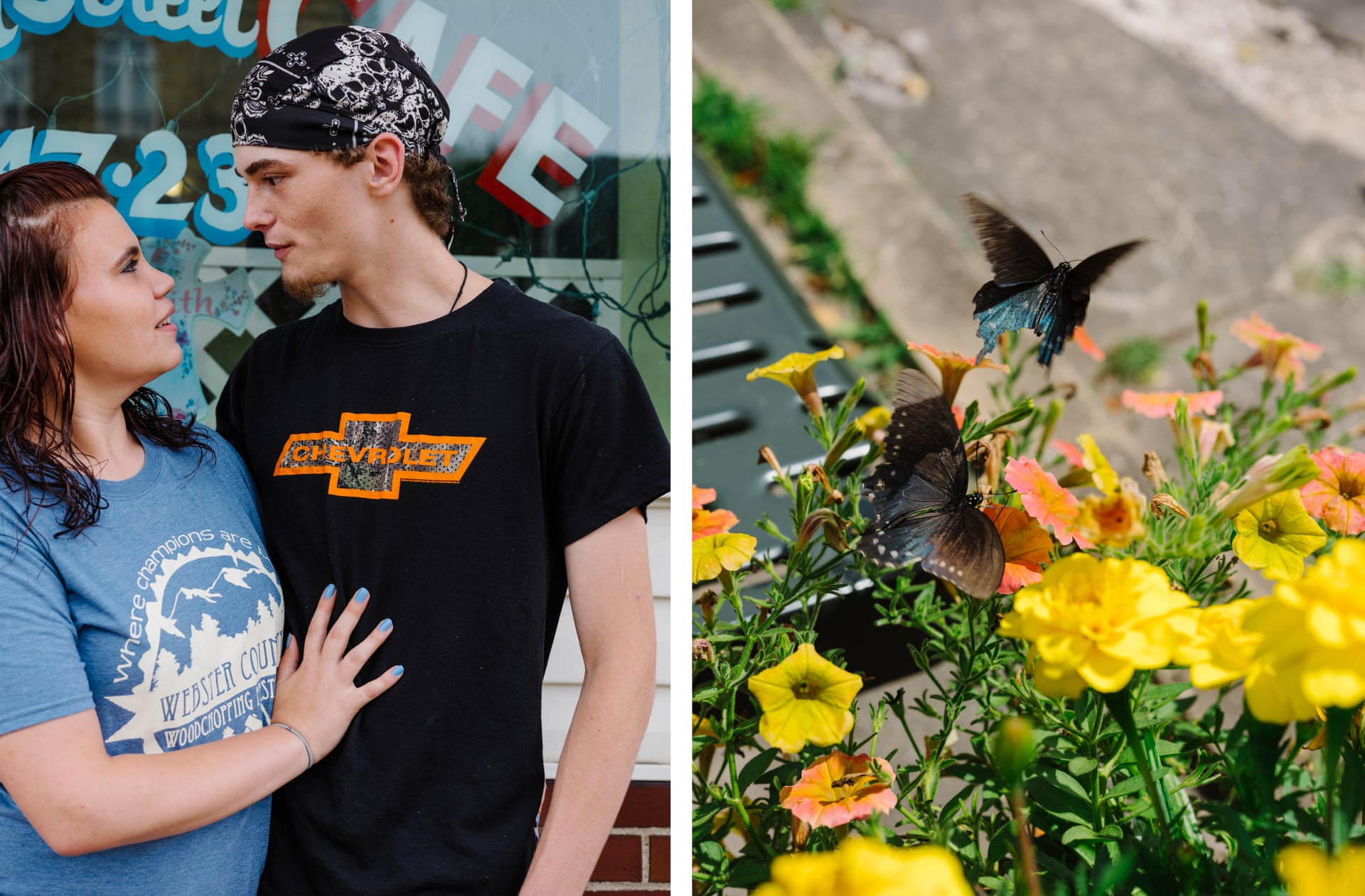 There’s a habit to simply go bleak, however, as places like Webster county depend on boom-bust industries not just for jobs, but for tax revenue that funds municipal services like schools and roads. And with a population that’s been shrinking since the 1960s, the tax base created by property owners and small businesses is currently not enough to sustain basic government functions.

In 2016, Webster county found itself $1.48m in debt to its regional jail authority, a sum that reflects the collision of old and new realities. Communities financially depleted by population loss and the decline of industry are now facing the devouring health crisis of opioid addiction. Claiming more than 20% of all fentanyl deaths in the entire state, arrests are up and elected magistrates favor harsher drug sentences. 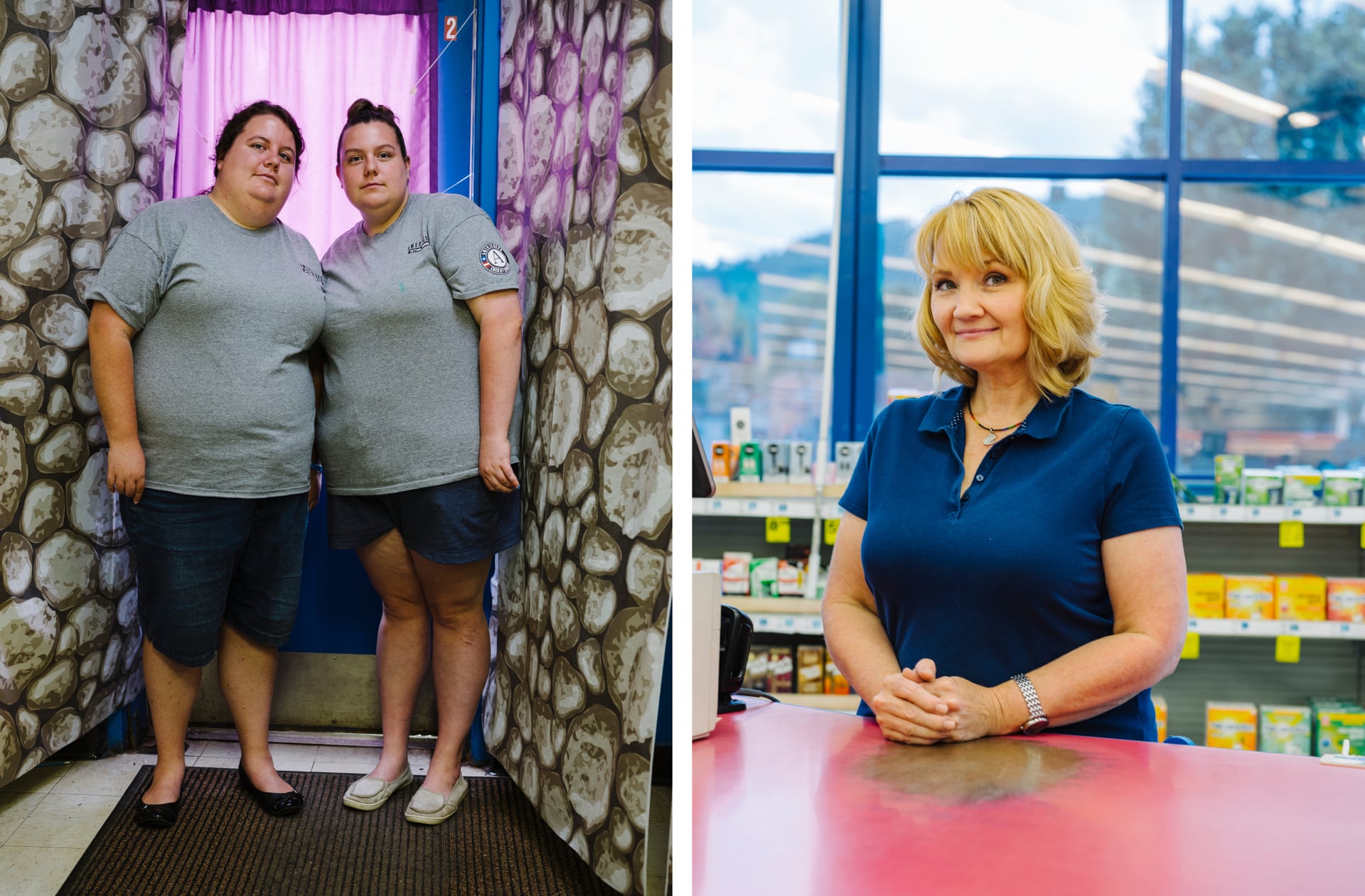 For more than 70 years, West Virginians have experienced both the economic push to leave and, for many, a fierce desire to stay. West Virginia is currently the only state shrinking from both natural population decline – there are more deaths than births – and out migration. The presumed fates of people who live in places such as Webster county become anchored to abstract debates about who and where is worth saving.

What if, instead, images of West Virginia make it look like a place where people live? Not trapped in limbo, their fates sealed, but a place where roofs get repaired and wind chimes hung, a place that looks like other communities which, perhaps, are not so often visually consumed with implicit despair in mind.

In 1900, the Webster Echo celebrated its community as “rich in everything that goes to make a people happy and comfortable”. Eich’s photographs are piercing because they move against the grain to dignify people who still imagine that could be true. This West Virginia looks like a place where, instead of running out, life goes on. 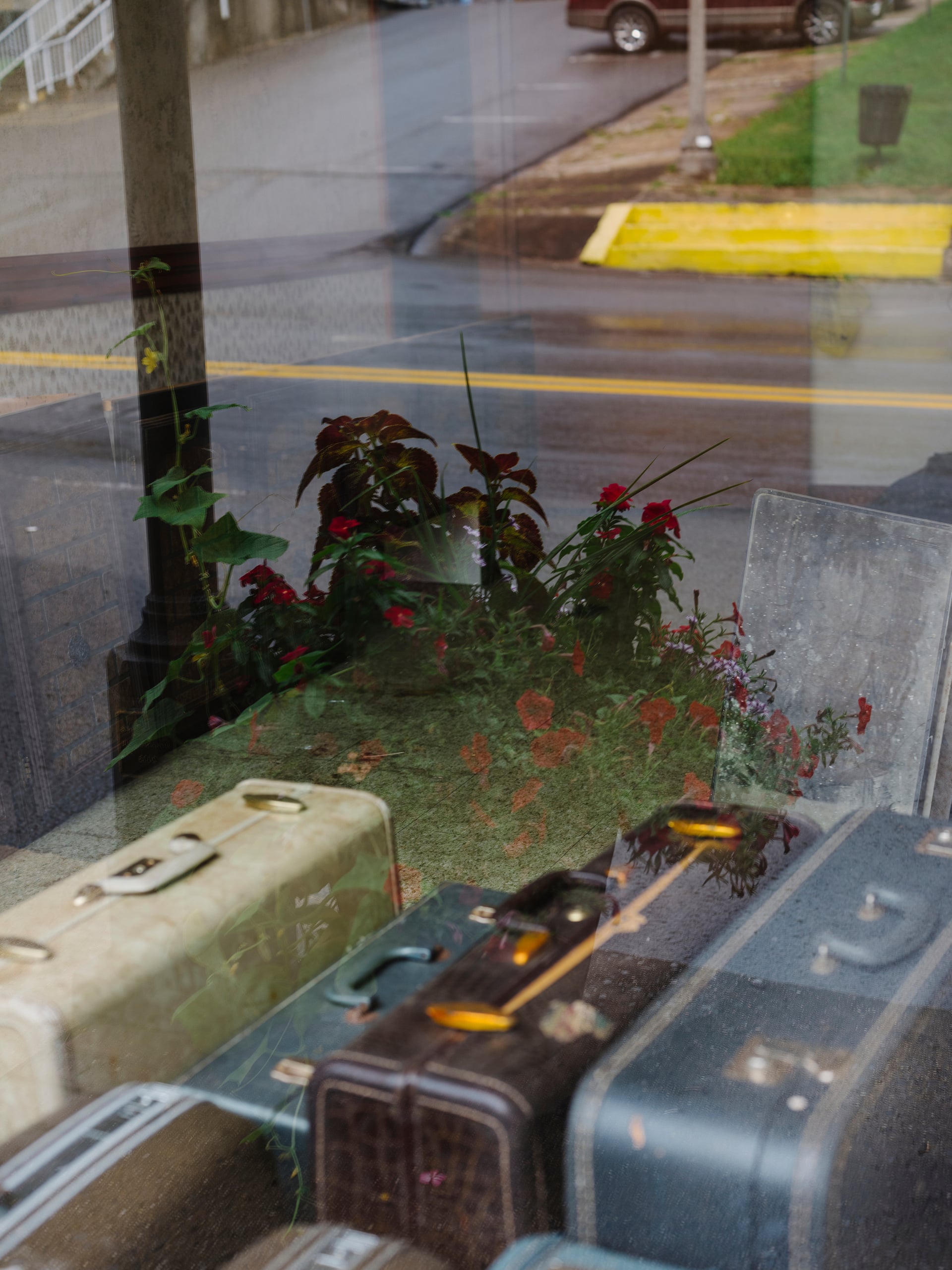 Reflections in a storefront in Webster Springs, West Virginia.

Half of the story

I didn’t grow up here.

Only been here a couple of months but I don’t care if I never go back. It looks like there’s nothing to do here.

I fix up people’s fishing and hunting camps — carpentry and electrical and that — enough to have something to do, enough to get by. I live in that camper trailer over there. People are real friendly, but they’ll leave you alone, you know?

The people I ran with lived on drama, died for it. Drama and drugs. Of course, any drug you can get anywhere, you can get in Webster Springs, but I mostly stay here: up the river where nobody bothers me.

Sometimes at this time of year, a little mist will hang over the river, and the dust from the road will hang in the air, and the feeling sneaks up on you that there isn’t any world beyond the mouth of this hollow. 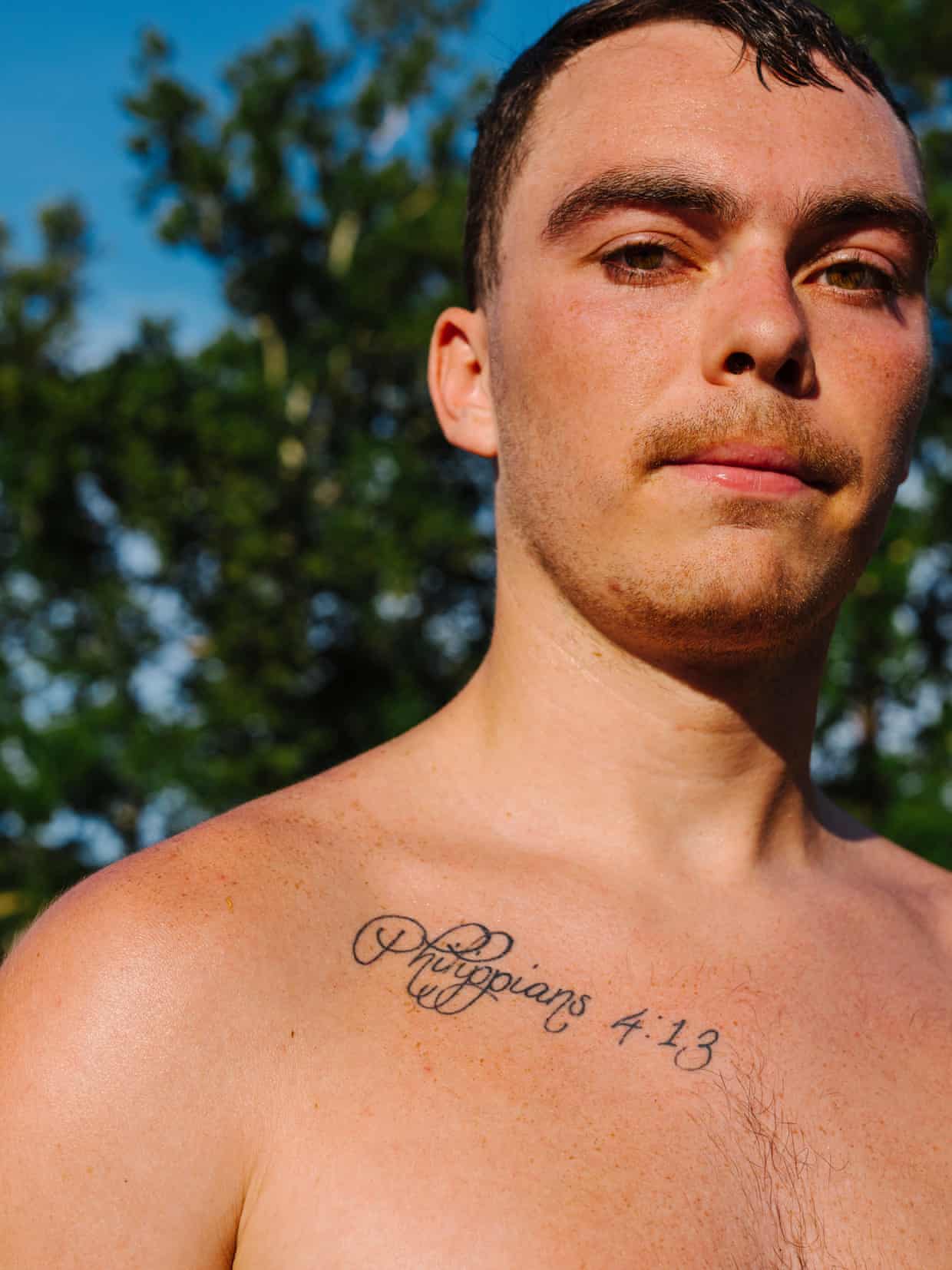 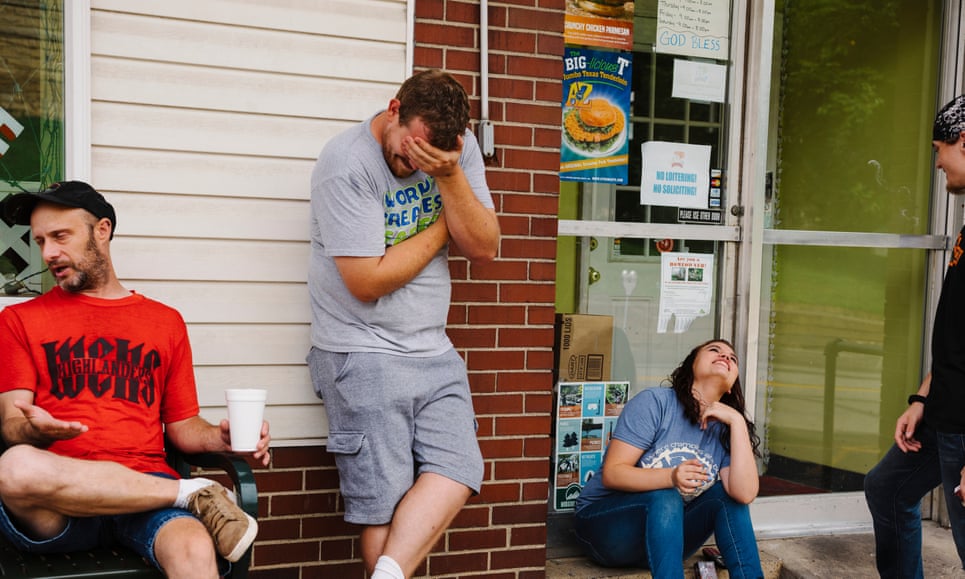 Outside of the Main Street Cafe, Webster Springs, West Virginia. 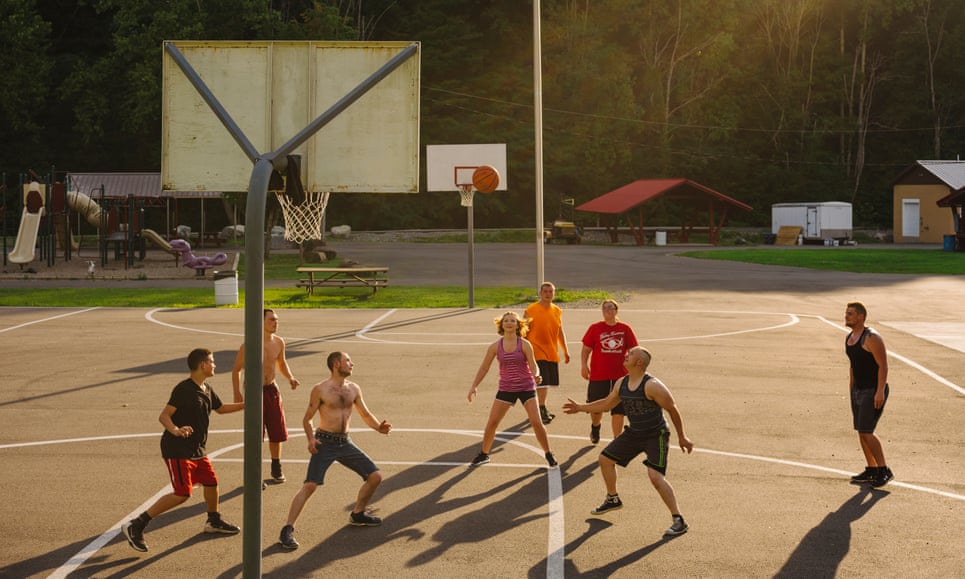 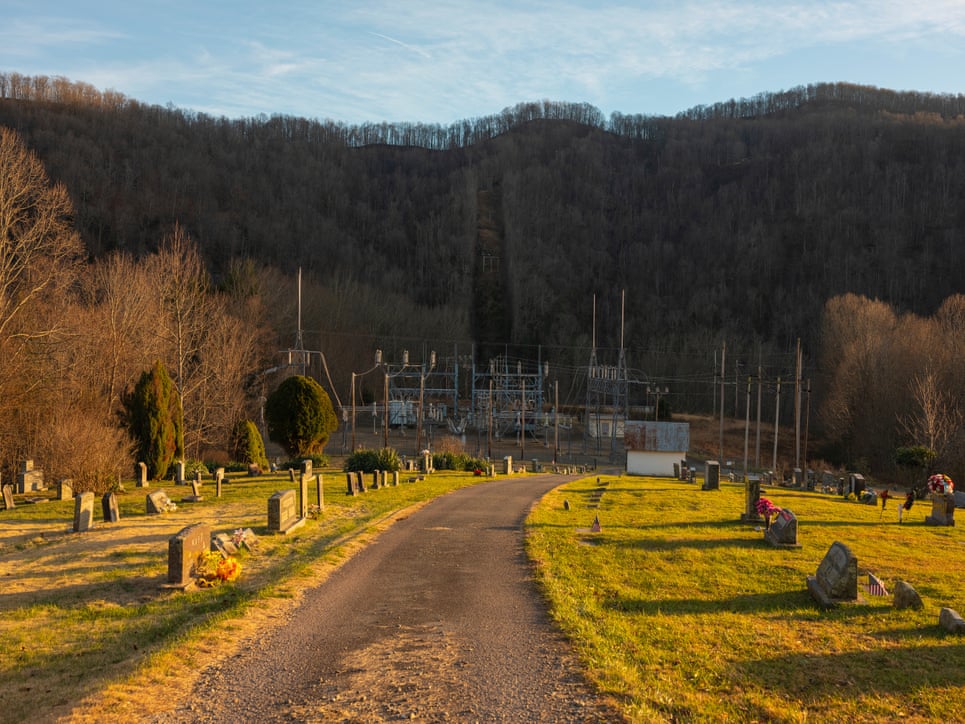 in subsea strata and mountain hillsides

to a richer, sharper smell: incense

burned on an ancient, animal altar.

slow to dissipate, almost an entity

to yellow smoke and snow-

Praise the sweat inside the scent—

sweetness of the human animal,

salt of its labor: blood

smell in the mineral 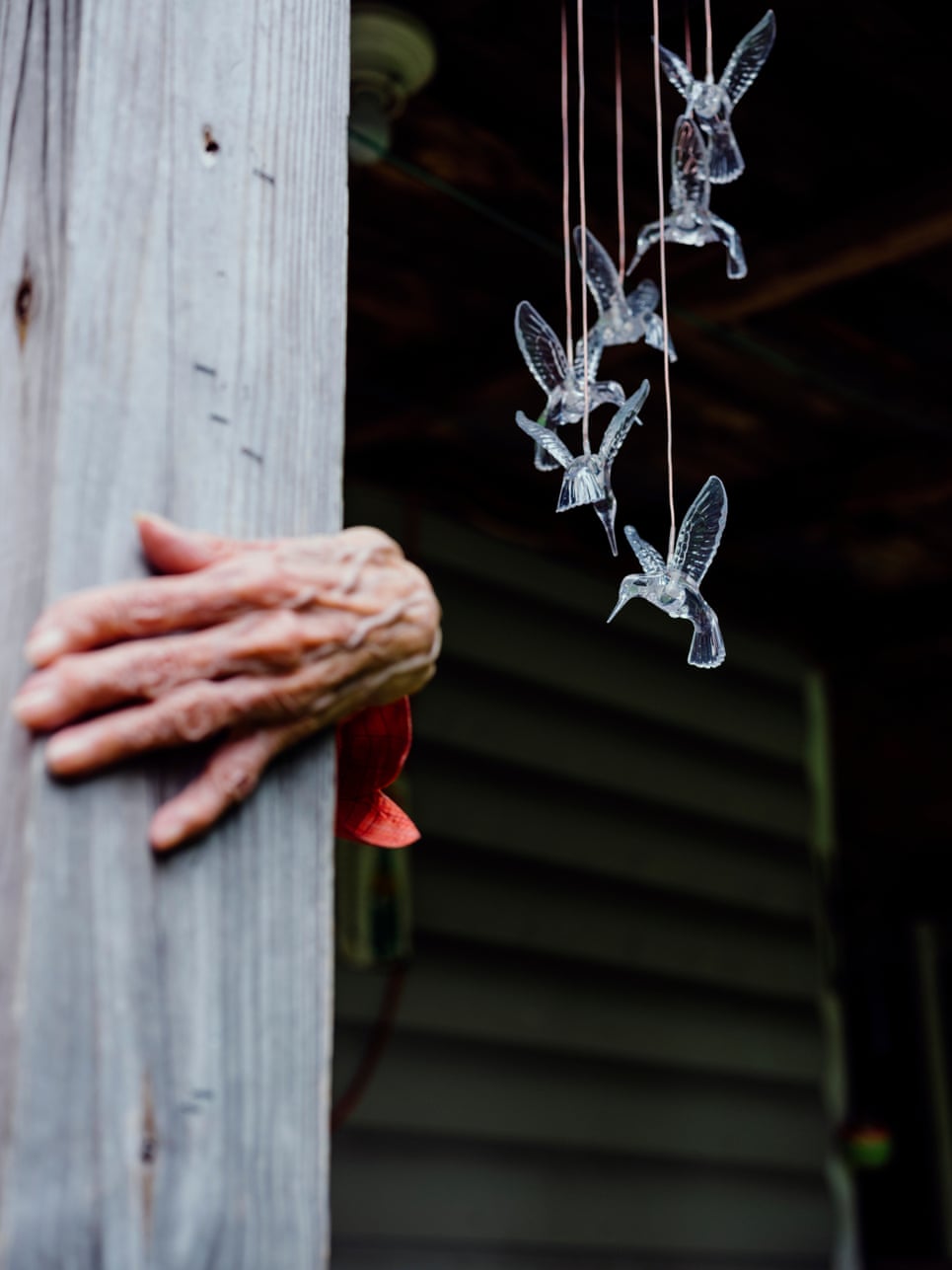 An elderly woman holds onto a post for support on the porch outside her home in Webster county, West Virginia. 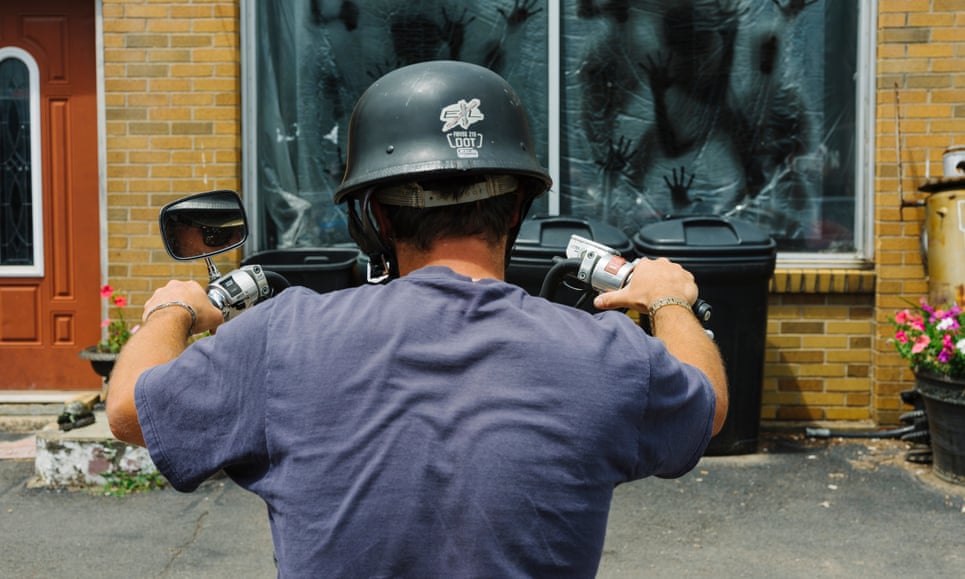 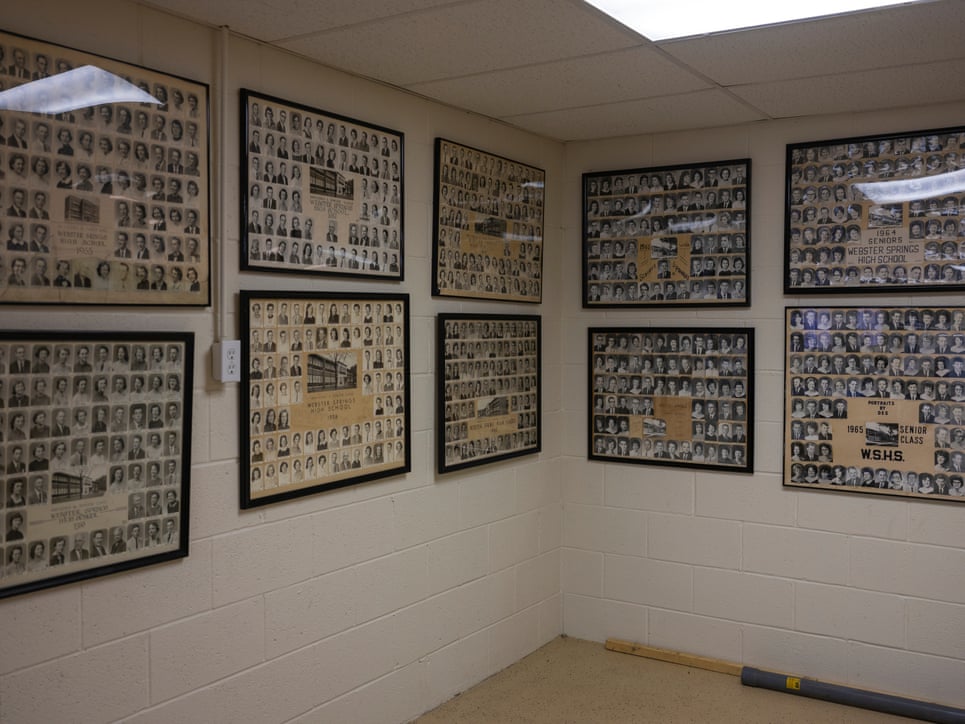 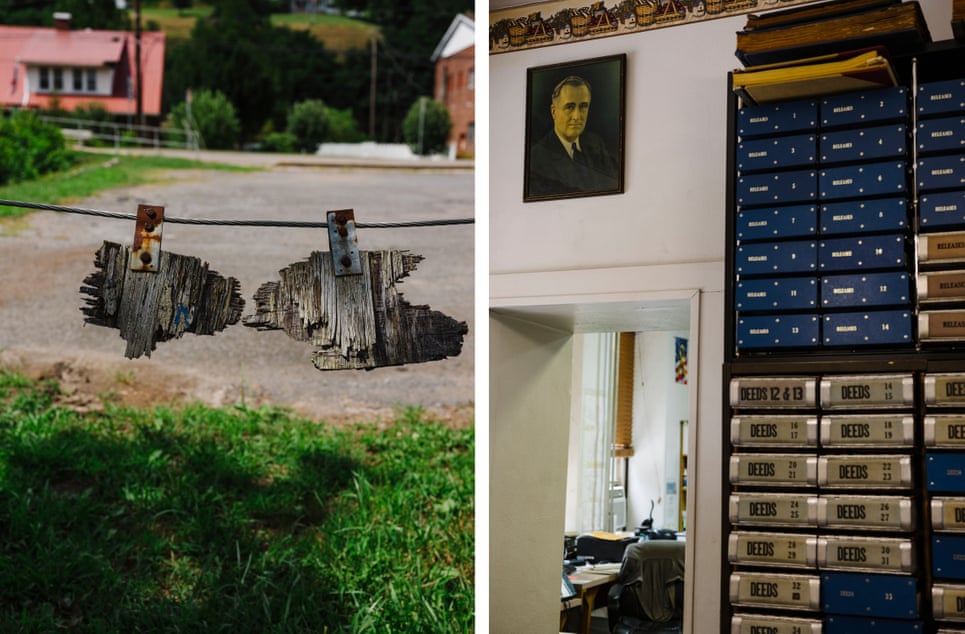 Please. Don’t allow any strangers to lie
on this ridge, or any backhoes to dig
into this ground. I need you

to make a shovel-opened,
shoulder-pried grave for me when I go.
Box me, don’t burn me: store me away

in a hillside I know like the bones
Dig down to a clay floor so water won’t get in
too easy: while I want to die

quickly, I want my body to linger as long as it can,
at least a century between box and bare bones.
There is no way you can bury me

without entering the earth yourself. You need to know
that worms-eye view – feel the blade of the spade slicing
through roots of unknowable plants, see the rectangle

of trapped sky from the bottom of my grave.
Make certain it’s safe enough, deep enough,
square enough to hold my eternity.

Once I’m packaged and lowered,
the preacher has intoned his boilerplate,
and you have heaped your plate with fried chicken

and pie, shovel me covered. After you do this
there is nothing I will not do for you. I believe
in the body, not its resurrection. 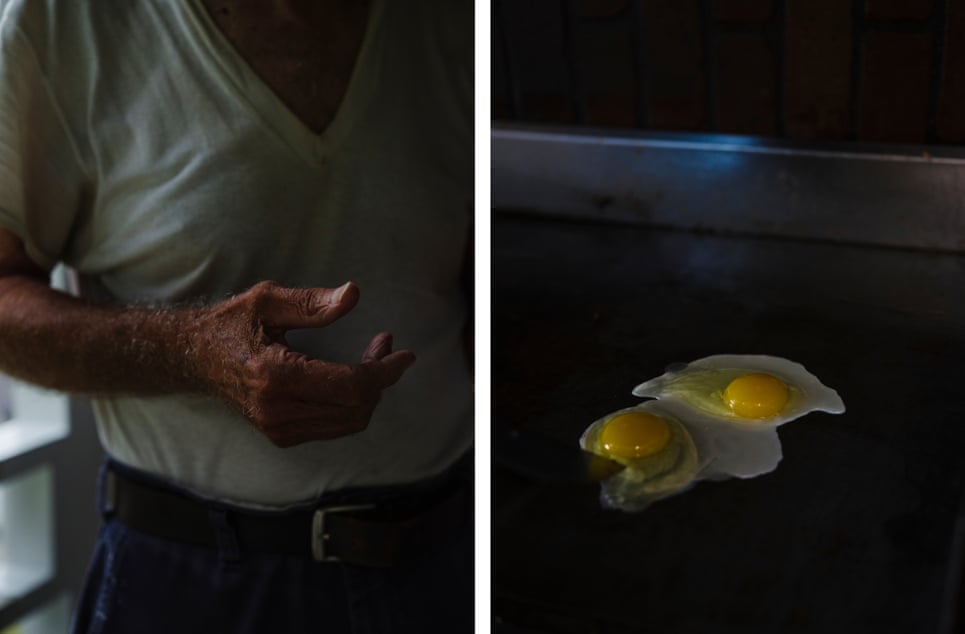 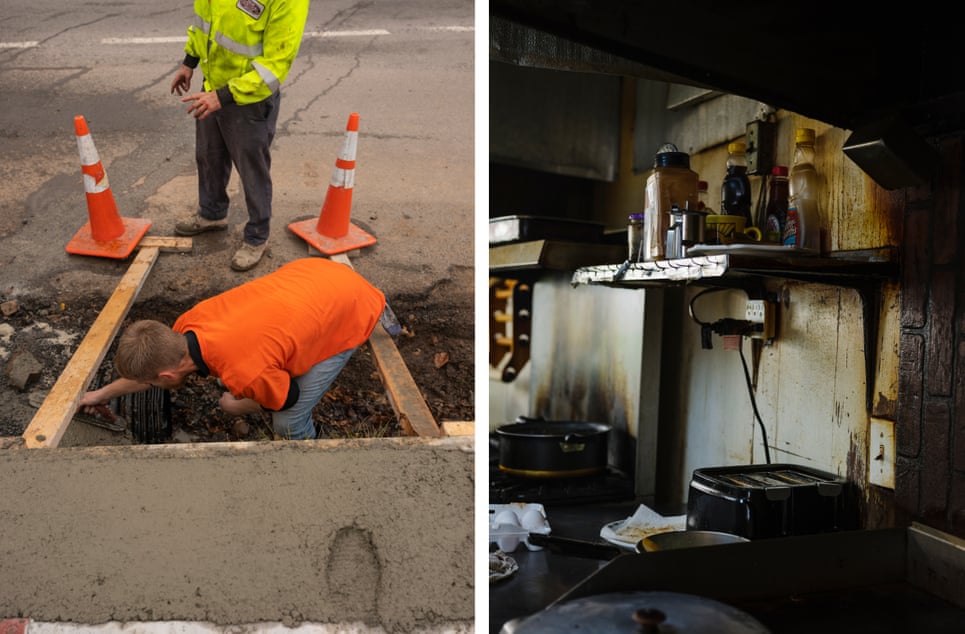 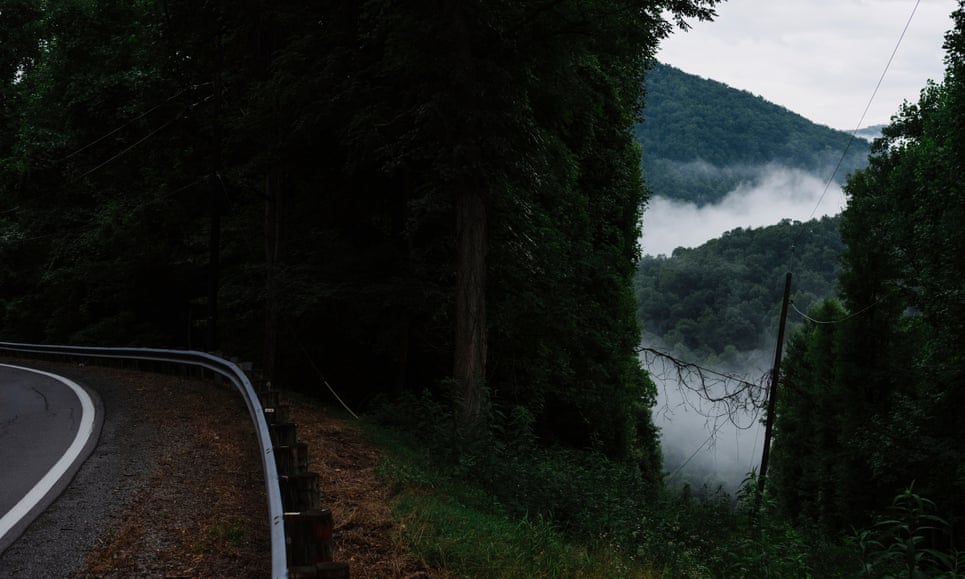 The Personal History of Everyday Objects

Somewhere in a showroom in San Francisco or Seattle, a young couple
picks out their first nice dining room suite. They have no idea
of the men and machinery, the sweat and labor, the diesel fumes
and distance involved in placing this table in front of them to buy.

Jake-brakes judder a semi-truck to a stop at the only light in the county:
another load of hardwood headed to High Point
to be made into high-end furniture and shipped
all over the globe.

A white haired woman with a walker uses every second
to clear the crosswalk, allows the truck to turn left
over the mountain bound for Summersville, Beckley,
points South.

It’s a ritual repeated many times a day as the best timber in the eastern US — cut
into boards right here in Webster County, West Virginia by men
who’ve spent generations in the logging woods and lumber mills —seeks out
its higher purpose.

The couple walks around the table a final time before deciding, trusting
it will match their hardwood floors, some of which
have come from the self-same hillsides
as the wood for the table.

They know it will look good spread with the Thanksgiving dinners
and everyday breakfasts they imagine preparing
with the four hands between them
for the family they do not yet have. 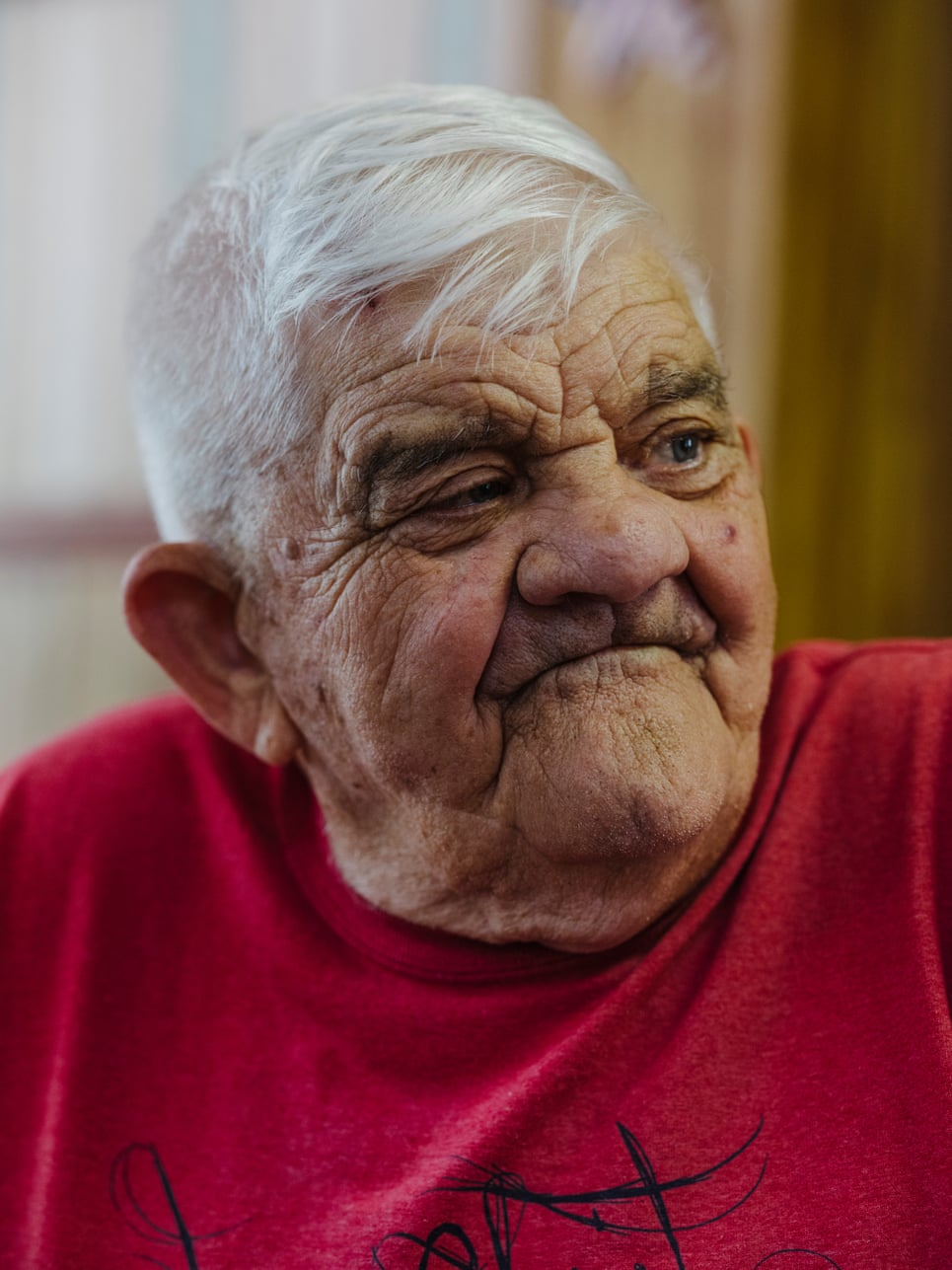 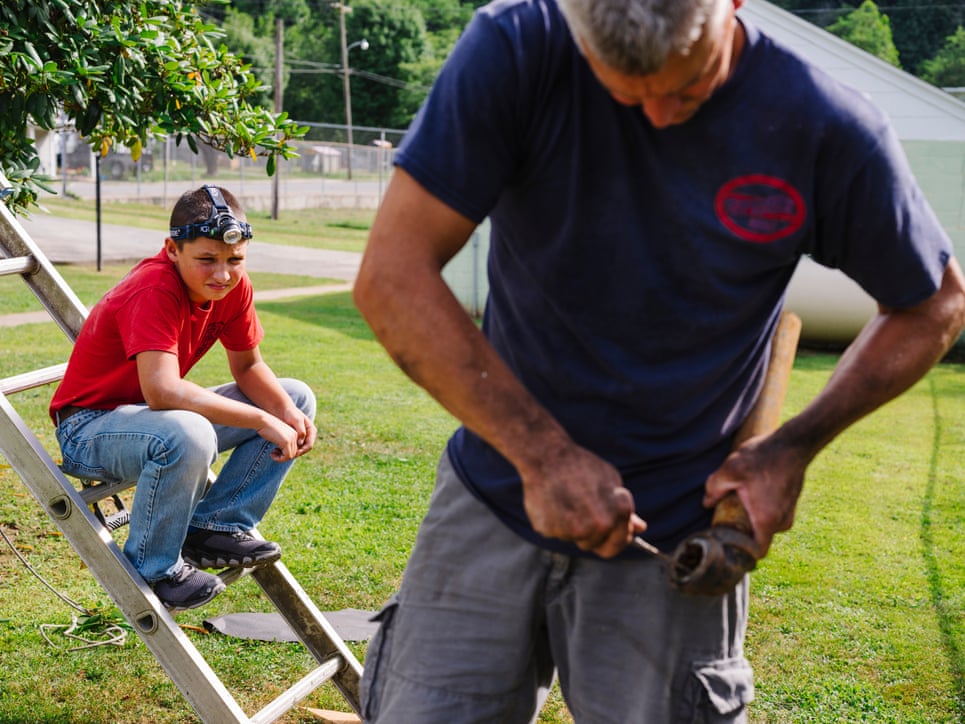 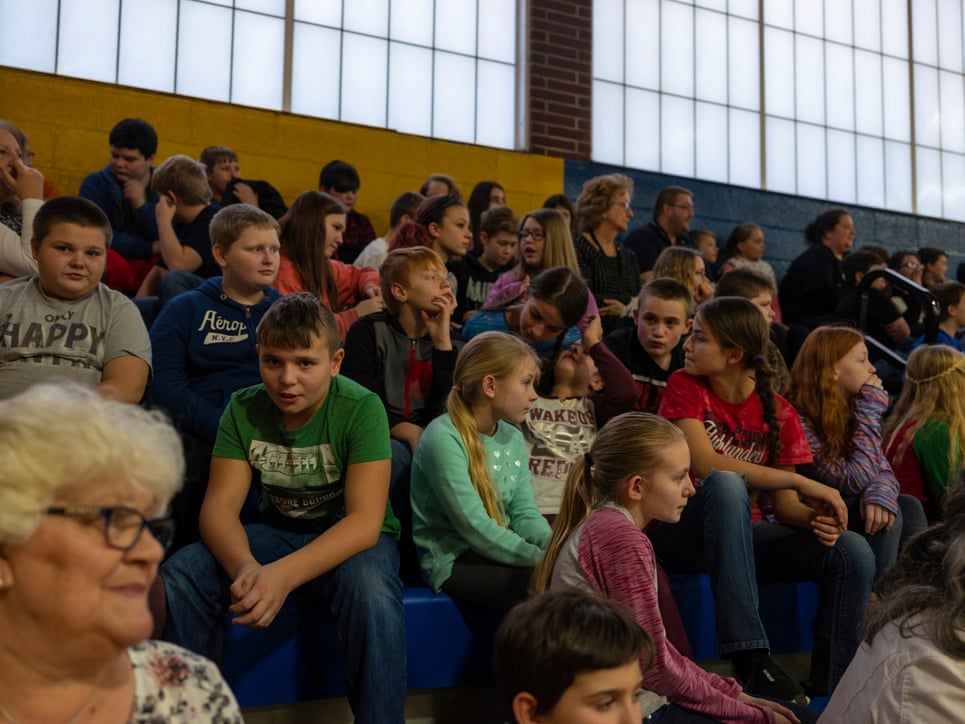 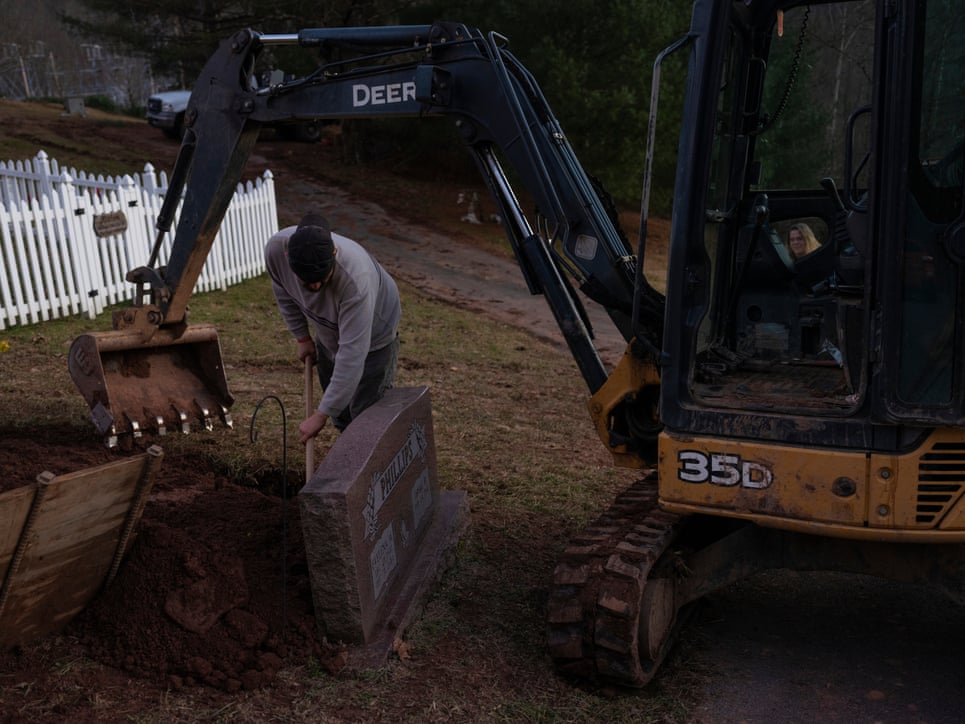 Jeff Hines fills a grave in a cemetery near Webster Springs, West Virginia.

On the Night of the Fire

the Oakland Hotel, the town’s last, abandoned
for a decade, proved the fire marshal right
by burning to the ground.

Embers winged in air, ash
drifting back to earth
as far away as the courthouse steps
and Elk River Road.

Green leaves curled
into brown on oaks
halfway up the hillside.

People wandered from
their homes, drawn
to the light, until half the town
watched in pajamas and sweat
pants.

Dogs barked for hours
and hours afterward
just in case we
missed the message. 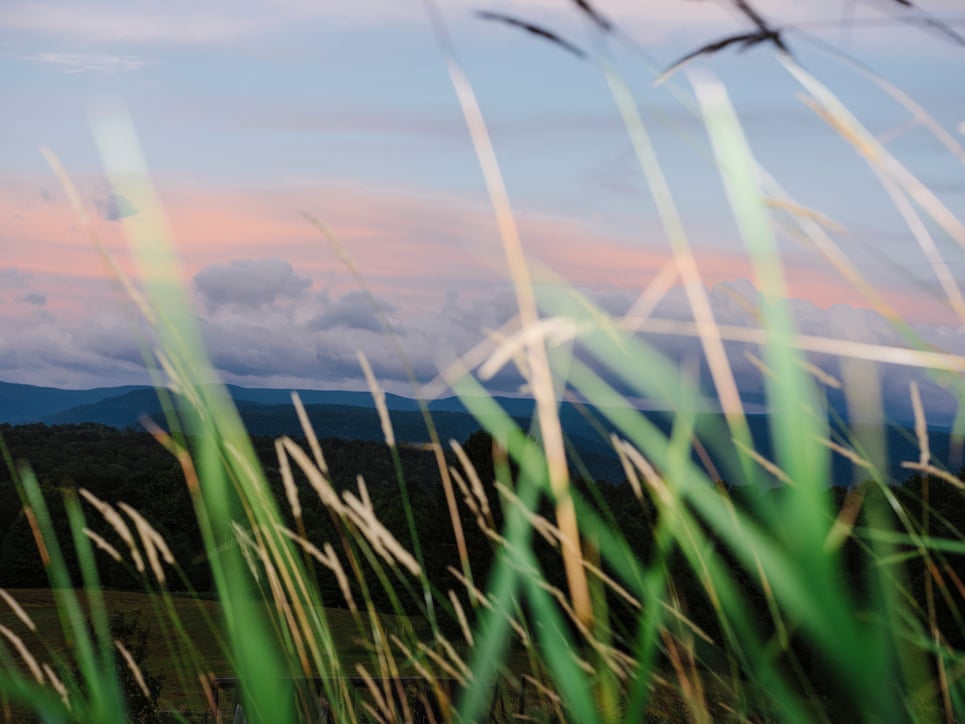 Elizabeth Catte is a public historian and writer who currently lives in the Shenandoah valley, Virginia.

Matt Eich is a photographic essayist and portrait photographer born and based in Virginia.

Doug Van Gundy is a poet and musician from Elkins, West Virginia.