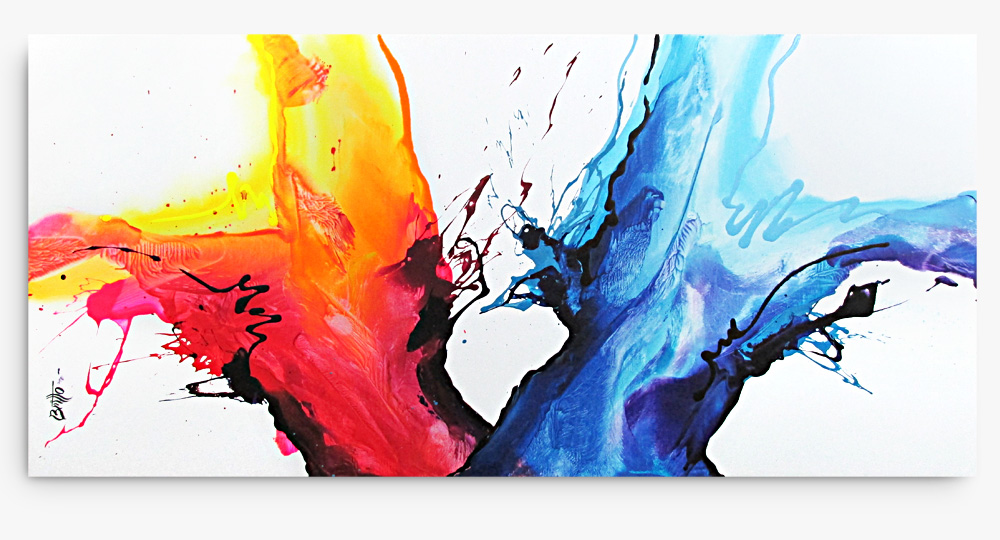 Let’s Push the Language of Journalism Past Its Limits

TWO YEARS INTO Donald Trump’s presidency, journalists and pundits seem hard-pressed for new, effective ways to describe each fresh outrage. That may be because we’ve reached the limits of journalism’s typical lingo and genres—of the blaring 24-hour news cycle, in which news outlets endlessly refresh their coverage of a worsening incident, framed by “BREAKING NEWS” chyrons that repeat our president’s racist Twitter commentary. No matter what Trump says, and no matter what we write, the results are often the same—indignation or repulsion from the resistance, a shrug or smirk or dismissal from the cult of Donald. The recent mass shooting in El Paso led to coverage of the use of the word “invasion” by both Trump and the killer to characterize immigration; this language seeps into our imaginations, and defines public debate. When words and traditional genres fail us, what other techniques might journalists deploy to break through the thicket of bigoted remarks and familiar stories of misery?

So here’s a modest proposal: let’s take the forms we use to the brink. And let’s also reach for unexpected genres, and fresh modes of expression (and if we are going to use the written word utilize unexpected language). Let’s turn to activist and reported poetry, create tweetstorms as journalism and protest, assemble more unedited audio clips of utter societal cruelty—children crying when removed from their parents. We could even project information onto buildings.

Without new forms, we can get stuck in certain frameworks; as linguist George Lakoff has warned, when one political party becomes trapped in another party’s field of reference, the former can act as stenographers—or worse, publicists—for the latter’s worldview.

Unadulterated expression—such as the recent video clips of kids whose parents were arrested by ICE in Mississippi, or audio posted by ProPublica of children crying for their undocumented parents—can loosen the grip that Trump clichés and critiques place on news coverage. The rawness of such recordings places them, in some sense, beyond language; helps them maneuver around audience apathy; and repels accusations of “fake news.”

If we are going to use the written word,  we need to be more imaginative about the modes we are using. What about poetry? Don’t laugh. Compared to news coverage, you might think of poetry as marginal, or ineffective, or obscure. But Danez Smith’s videos of their poems about race and gender, which have been viewed hundreds of thousands of times on YouTube, are anything but.  Student and immigrant activist also Jose Bello made waves with his poem, “Dear America,” which he read in front of the Kern County Board of Supervisors in Bakersfield, California, shortly before his arrest by ICE. 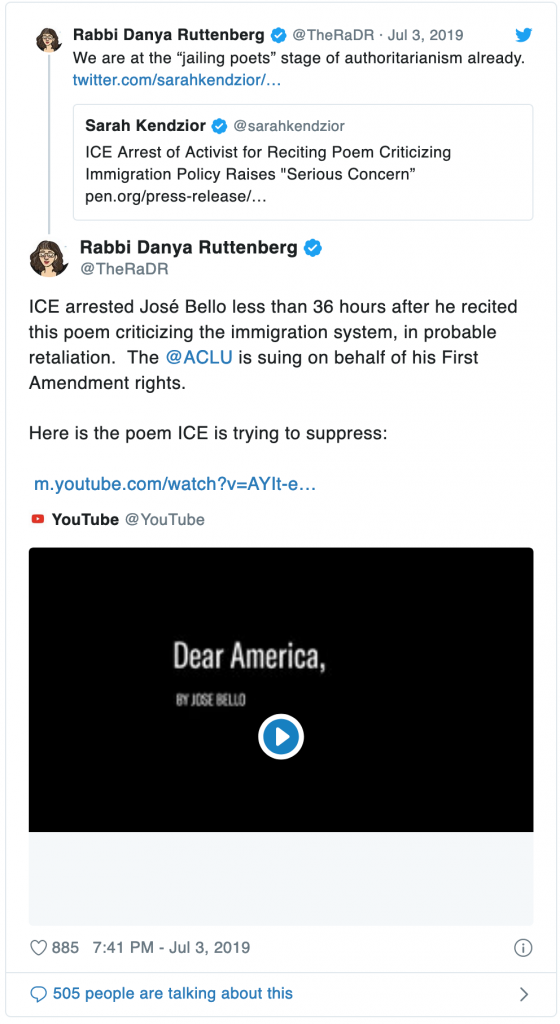 I am also thinking of “documentary poetry,” which is reported poetry based on interviews, newspaper accounts, or oral histories. In one such project, taxi drivers and waiters collaborate on poems with titles such as “Instruction Manual” that come directly from language used by their customers and bosses, and clarify the struggle of the American working class in a way that today’s supposedly sunny employment numbers never do. And, given recent revision of poet Emma Lazarus’s “The New Colossus” by Ken Cuccinelli, acting director of US Citizenship and Immigration Services, in a radio interview (“Give me your tired and your poor who can stand on their own two feet and who will not become a public charge”), we might also consider revising classic poems in the positive, to make contemporary political expressions.

We could also try to reproduce the power of some recent, unintentional news ventures, such as the tweetstorm that sprouted organically in response to a US Army tweet exhorting veterans to share their military experience on social media. Thousands did, creating a horrifying list-poem of mutilation, PTSD, familial alcoholism, abuse, and the damages inflicted on our “enemies” and their children—a virtual mile of human catastrophe. The tweetstorm forced the suffering of veterans back into people’s minds, nearly two decades after the beginning of the war in Afghanistan. Unconventional expressions of dissent can blow up unexpectedly, communicating a world of suffering and history far better than a conventional news story could.

Some media makers are also gaining traction by effectively going “Banksy” on the news—using protest signs, physical theater, light-shows, emojis, and billboards, among other things, to export their concerns. Their materials are not printed pages or binary code but rather the sides of buildings or the walls of subway stations. Artist and activist Robin Bell has projected protest messages on the side of the Trump International Hotel and the FBI and a Washington, DC courthouse, among other buildings. While his illuminated words aren’t exactly journalistic—the word “shithole” is projected—might journalists use this same technique for more measured information distribution and expression? The artist Jenny Holzer has made such work from documents obtained through records requests and pertaining to detention and interrogation. New York artist Jonathan Allen “edits” the subway posters for Hollywood and TV fare—Pretty Little Liars, say—turning them into disturbing and hilarious images of Trump and Vladimir Putin. For now, he’s doing this in bluer-than-blue Brooklyn. But this sort of subversive signage could just as well tout reported information, and could emblazon hotels and bus stops around the country.

The Far Right understands this kind of nouveau messaging is part of what cuts through the informational kudzu. A gun-shop billboard ad in Murphy, North Carolina, featured a photo of the “squad”—Reps. Alexandria Ocasio-Cortez, Ilhan Omar, Ayanna Pressley, and Rashida Tlaib—with an overheated reference to the “4 Horsemen” of the biblical apocalypse, then dubbing them, less biblically, “idiots.” This was inciting and dopey. It did, however, get me thinking of what could happen if journalists and others started renting billboards, especially in Red States, using this signage to get true news further out there. At the Economic Hardship Reporting Project, the organization I run, we have supported some of these methods, from assigning poets to create reported documentary poetry to underwriting a film that used FOIA-ed footage, from police dashboard cameras, of undocumented people being dragged from their cars. We have been investigating launching billboards in 2020. I’ve also written a collection of poetry, Thoughts and Prayers, which contains a number of reported poems, and which is out this month. (A poem from Thoughts and Prayers follows.)

One could argue that quirky techniques like using billboards or projectors may seem too small-fry, or just another cool way to preach to the converted. Given our current rhetorical depletion, however, what else can we do? If we stay in our traditional journalistic lanes, we will continue to be twisted up in our own outrage, regurgitating the terrible phrases of those in power, perhaps unintentionally making them only more powerful.

This poem is a filtered version of interviews with more than two dozen women I spoke to at abortion clinics, counseling service offices, and pregnancy centers in Mississippi, Indiana, and New York. It also refers to short films and features on this topic that I have worked on—“The Last Clinic,” “Reconception,” and “Jackson,”—as well as many articles I have reported and written. I think of it as a meta- text around this reporting.

When we type “abortion”

autofill writes, I am pregnant.

I am pregnant in

Spanish. I am having

a baby and have no

insurance. I’m scared of having

a baby. What trimester am I

in. What trimester is abortion illegal?

Google says: I need your love.

I need an abortion.

I am pregnant can I eat shrimp?

Am I having a miscarriage?

I need help paying for abortion.

Not ready to have this baby.

God will punish, old ones

say in unison. They sing,

with a Santa beard and a long gun

enters a clinic in Indiana.

too near Women’s Health,

In a place like this, in America, a long gun.

Women afraid of dying while

they are trying to find their life.

On a normal day, women aged

at daycares, at the hospitals

at night. Today, they learn

the truth. That the polite

The door clicks when it locks.

Hungry to talk. No words.

She’s got a cold from

The doctor talks through

the procedure. The someone

holding her hand, not

From a Baptist town, her mother

full of God. So she lied,

got on the bus here. Drove

money for the hooker

motel, then the overnight

God cared or was it the care

One girl was a sturdy teenager,

with a broken ballpoint.

Another, redheaded, the hottest

number at the Bingo Hall in

“What about your boyfriend?”

She answers, “He stopped

talking to me. All he wanted

With her own body, hurtling.

if she was pregnant.

One was doing this for

The soldier said she was

doing this so I can fight

Plan A: the untrustworthy

an apple mini pie, some orange

drink. She lay down on

her side. So many

She slid inside the office

a counter lady, was led into

She was put to sleep

and woke up to saltines,

in gowns, a cultic circle.

Her friend called it

words and then the surprise

A mandala of succor and suffering.

Dark blood could mean anything.

It gets sloppy when you are trying to find love.

A glass of water, a small

flower in your hair.

poems about abortion and feelings

Support. Poems about abortion from

a baby’s point of view.

We can say: The birth

We can say: The birth

These choices are always field

This feeling won’t forget them.

This feeling won’t forget you.

Alissa Quart is the author of a forthcoming poetry book, Thoughts and Prayers, and her non-fiction book, Squeezed, is just out in paperback. She is the Executive Director of the Economic Hardship Reporting Project.