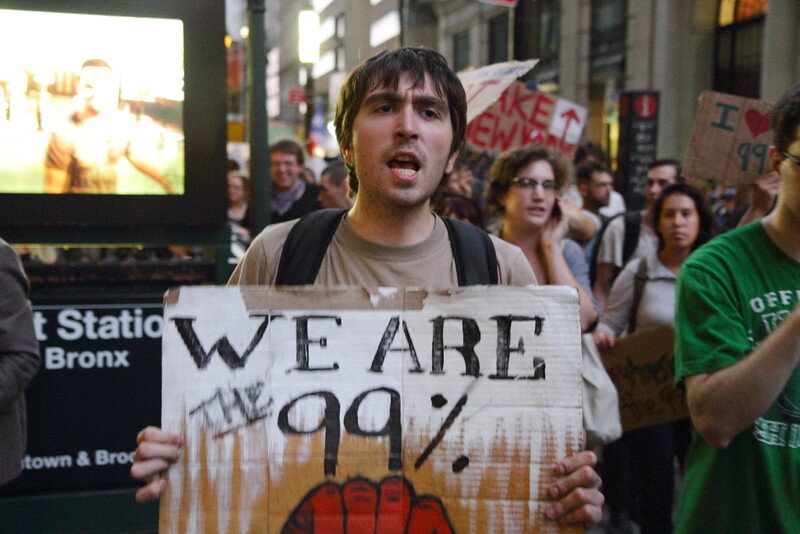 In late 2010 and early 2011, huge uprisings kicked off around the world, including the Arab Spring and the European Indignados movement. Occupy Wall Street was premised on the hope that something similar could happen in New York City, the epicenter of the greedy financial sector that had recently crashed the global economy. Surely New Yorkers had lots to be angry about.

On the morning of September 17, when I left Brooklyn for lower Manhattan, I didn’t bother bringing a tent. I assumed the police would clear us out by the end of the day and I would go home when dusk fell.

I was wrong. Occupiers managed to stay the night.

That first day of Occupy Wall Street was unlike any protest I had ever attended. Instead of marching and shouting, we settled down in Zuccotti Park, broke into small groups and had discussions.

Most of the people in the circle were in their early-20s, but there were older people too. None of us felt represented by the people holding public office. We all agreed that massive, systemic change was required.

Occupy was never my ideal protest. It could be messy and frustrating at times, but I also knew my perfect social movement would never appear. The conversations I had that first afternoon, sitting in a circle with random strangers, convinced me to stick it out. I quickly became so invested in the occupation that I asked my partner, the musician Jeff Mangum, to come sing for our fellow protesters in hopes it might raise their spirits.

Today we take for granted that social movements exist, but Occupy emerged at a moment when public demonstrations were practically nonexistent. Just seeing people out in the streets was exciting. Even better, the protesters were talking about inequality, using the frame of the 1% and the 99% to highlight glaring economic injustice.

If nothing else, Occupy forced a conversation about class and capitalism in America. Now we talk about how billionaires shouldn’t exist and the need for universal public health care, as opposed to profit-driven health care. We talk about the fact that our economy is broken, and name socialism as a possible and increasingly popular alternative (among younger people, at least). A decade ago, such ideas were basically taboo.

But Occupy did more than “change the conversation,” as the cliché goes. Today I see Occupy’s influence all over. Former occupiers are working to transform the system from inside and out.

Here are four areas where Occupy’s ongoing legacy is at work:

I never would have guessed that Occupy Wall Street, given its staunchly outsider stance, would help breathe new life into electoral politics. These days people often connect Occupy to Senator Bernie Sanders’ 2016 and 2020 presidential campaigns, but few likely realize just how direct a line it is. For example, Sanders’ 2020 senior adviser Winnie Wong, national organizing director Claire Sandberg, California grassroots director Melissa Byrne, national field director Becca Rast, and deputy national field director Nick Martin were all on the ground for Occupy, in one city or another, in 2011.

Beyond the Sanders campaign, lots of Zuccotti Park regulars are currently engaged in electoral work in various capacities, including Nelini Stamp, now the director of strategy at the Working Families Party, and Leah Hunt-Hendrix of Way to Win, a women-founded progressive donor and political strategy hub. There’s also Jonathan Smucker, who went from being a core member of Occupy’s ad hoc press team to the political director of Pennsylvania Stands Up, which supports insurgent candidates in his home state.

Former Occupiers aren’t just working behind the scenes; they have and are running for office all over the country. Law professor Zephyr Teachout blazed the trail, first in 2014, when she enlisted folks she met in the movement to help her run for New York governor (a worthy attempt to oust centrist incumbent Andrew Cuomo), and then, in 2016, when she sought a congressional seat (which she also didn’t win). Jillian Johnson, also at the vanguard of this trend, was more successful. A brilliant, radical, black, queer woman who played a prominent role in Occupy Durham, she just won her second term on Durham’s city council and is currently mayor pro tempore.

Looking ahead to 2020, Doyle Canning, a longtime activist and Occupy participant, is challenging a 33-year incumbent, seemingly awash in corporate campaign cash, in Oregon’s 4th congressional district. In Philadelphia, Nikil Saval (one of my co-editors for five issues of an Occupy-focused newspaper published in collaboration with the literary magazine n+1) has officially launched a bid for a state legislature seat, earning the early support of local activists and union organizers.

In Brooklyn, Sandy Nurse is running against an incumbent she believes doesn’t serve her community’s interest. A fixture of Occupy Wall Street’s direct action working group, she told Teen Vogue she never would have imagined herself running for office in 2011, when she was 26 years old. A self-described “military brat” of African and Irish descent, Nurse said her upbringing shaped her distrust of the state: “For me, my experience of government was always through violence and total exploitation of other people’s lands and resources.”

But over the past eight years she has been focused on the intersection of economic, environmental, and racial justice at the neighborhood level, working closely with youth (the biggest demographic in her district) and getting to know local elected officials in the process. “Working at the micro scale really allowed me to see that it does matter who is in those seats. It matters that they show up,” Nurse said. Her mounting frustration at the amount of time and energy regular citizens have to expend pressuring their representatives to do the right thing motivated her to run. Especially with climate change coming, Nurse said, “we don’t have time to convince anybody.” Better to elect people who are ready to fight. “You don’t have to convince me. I’m like, ‘Let’s go, let’s go do this.’”

In June, Sanders and representatives Alexandria Ocasio-Cortez, Ilhan Omar, and Pramila Jayapal held a press conference outside the Senate and announced the College for All Act of 2019, which, if passed and signed into law, would cancel all student debt and make public college free.

They shared the podium with members of the Debt Collective, an offshoot of Occupy Wall Street I cofounded. Our group put student debt cancellation on the national radar when we launched a groundbreaking student debt strike. The strike began with 15 former students who had attended for-profit colleges and bravely refused to pay their federal loans. That led to a larger campaign that has helped secure over a billion dollars in debt relief for tens of thousands of people, and has been said to rankle Donald Trump’s billionaire secretary of education, Betsy DeVos.

The Debt Collective has also made progress on the issue of medical debt abolition. In 2012, we launched something called the Rolling Jubilee, which involved buying portfolios of medical debt on the secondary debt market (where it is sold for pennies on the dollar), just like debt collectors do. But instead of collecting on the debts, we erased them. Ultimately, we wiped out over $15 million in predatory medical debt this way. In September, we were overjoyed when Sanders proposed eliminating all $81 billion of medical debt currently in collections using a mechanism similar to the one we devised.

When we first raised the idea of debt resistance and debt cancellation at Occupy, we were mocked. We’ve come a long way: Thousands of people have had their loans erased; our efforts have influenced the 2020 Democratic primary; and we’re planning an even bigger campaign to ensure full student debt relief and free college become not just proposals but realities. Remember this: If the federal government ends up canceling your student loans, you’ll have Occupy to thank for it.

Sara Blazevic, 26, draws a direct line between Occupy Wall Street and the Sunrise Movement, the youth-led environmental organization she cofounded and now helps lead as managing director. Last year the group put the Green New Deal (GND) on the political map by embracing bold and visionary tactics. Sunrise engages in civil disobedience to push Democrats to promote solutions that actually match the scale of the climate crisis (it didn’t hurt when AOC dropped by their sit-in at House Speaker Nancy Pelosi’s office to offer her support) and backs political candidates who are already onboard with the cause. They call this dual approach building “people power” and “political power.”

Blazevic grew up in Manhattan, and had just left for her first semester at Swarthmore College when Occupy erupted. She recalled sitting glued to the livestream, and visited Occupy Wall Street during her October break. Blazevic eventually became involved in Occupy Philadelphia and the Occupy group on her campus.

“Occupy gave me this sense of limitless possibility around scale and decentralization, and this sense that it is really possible for social movements to go viral in this way and to penetrate everyone’s lives and consciousness,” Blazevic told Teen Vogue. It also showed her that people want to be part of a cause and feel that they are part of something meaningful.

Blazevic had her criticisms of Occupy too. The movement’s lack of concrete demands and radical openness (which wasn’t always effective, and could be downright chaotic) made her crave a more disciplined, strategic form of organizing. But now that Sunrise has gone through its own viral moment and is strategizing for the year ahead, she and her collaborators find themselves thinking about Occupy more and more. No matter who wins the White House in 2020, Sunrise knows there will need to be a nationwide popular revolt. The masses will need to take to the streets demanding a GND or it will never happen. Blazevic, for one, thinks there’s something still to be learned from Occupy’s simplicity and how it galvanized all kinds of people to take action.

For me, Occupy’s greatest lesson was not an answer but a question: What is democracy? Partly inspired by my experience at Occupy, I made a documentary with that query as a title and am writing a book on the same theme. As part of the process I interviewed all kinds of people, including famous philosophers, young refugees, factory workers, and middle school students.

While I think the turn toward electoral politics is a positive and necessary development, Occupy fervently, and correctly, insisted that democracy has to be about much more than voting every couple of years. We need to bring democracy into all sorts of areas of our lives: communities, schools, workplaces, and our personal relationships. As an old feminist slogan goes, “Democracy in the home, democracy in the country!”

No one person can answer what is democracy on their own. We have to wrestle with it collectively. That’s what struck me that first morning in Zuccotti Park as I sat talking with a small group of people. Eight years on, almost everyone I got to know through Occupy is still learning, experimenting, and organizing. What excites me today is how many more people are now part of the conversation.

Astra Taylor is the author of Democracy May Not Exist, But We’ll Miss It When It’s Gone and a Puffin Foundation/Economic Hardship Reporting Project fellow.