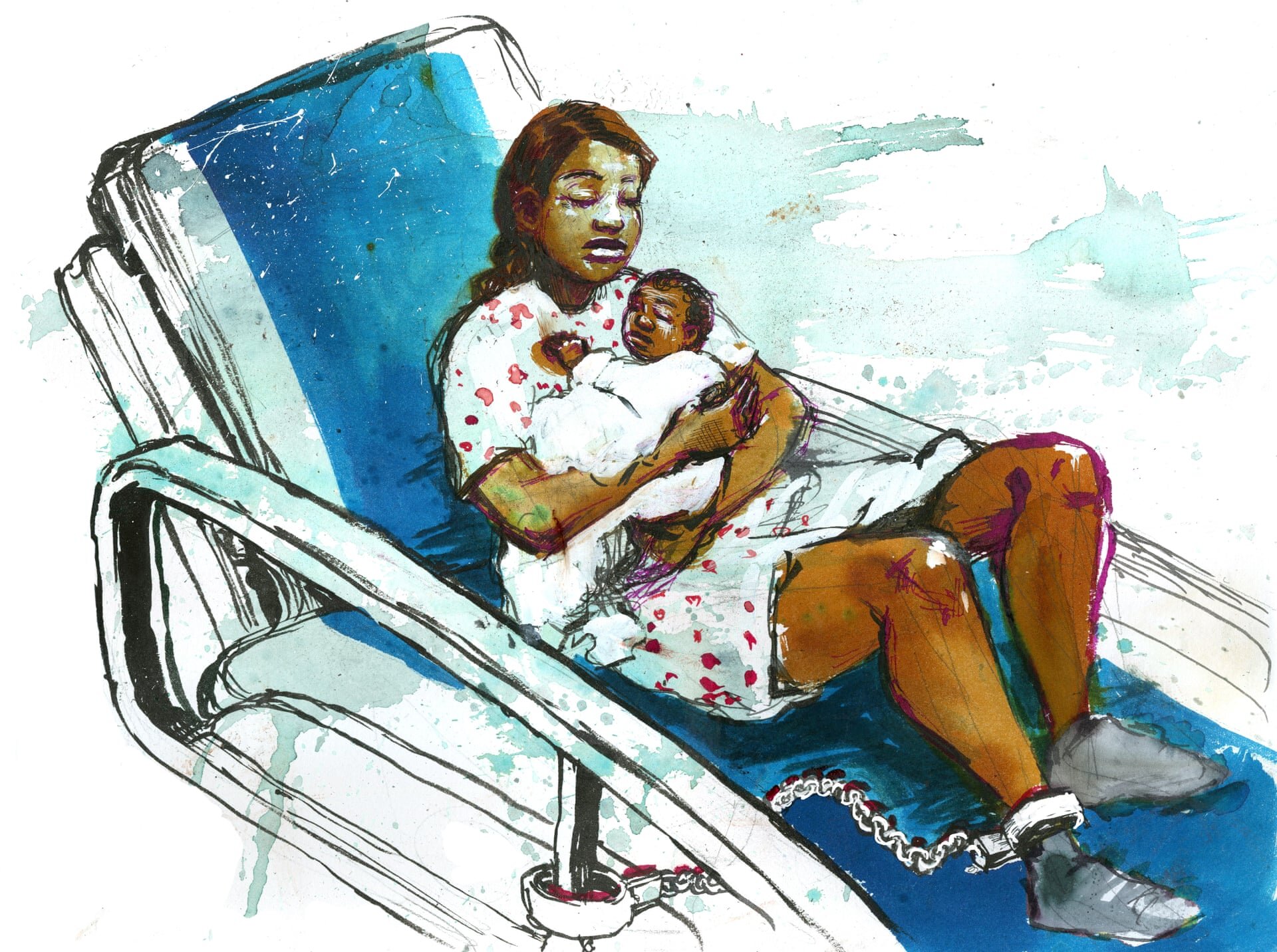 Currently, 23 states do not have laws against shackling of incarcerated pregnant women. Illustration by Molly Crabapple
Families

Pregnant and Shackled: Why Inmates Are Still Giving Birth Cuffed and Bound

Seven months pregnant, hands cuffed and feet bound, Sophia Casias shuffled across the floor at the Bexar county adult detention center in San Antonio, Texas, on March 2017. A guard at stood in front of her, holding the chain connected to Casias’s handcuffs.

Casias couldn’t keep her balance though and crumpled on to the wet cement floor. She sobbed and felt as if she couldn’t breathe. She would later realize that she had felt the same way when multiple family members sexually assaulted her as a child.

In her third trimester, Casias, who was jailed for shoplifting – a crime she says she committed to feed her heroin addiction – recounted that after she fell “a female guard grabbed me by the hair and was making me get up. She was screaming: ‘Bitch, get up.’ Then she said, ‘That is what happens when you are a fucking junkie. You shouldn’t be using drugs or you wouldn’t be in here.’”

The jail put Casias in chains a year and a half before the passage of the First Step Act in December 2018, a federal law that prohibits some of the most punitive measures against prisoners, including shackling of pregnant women.

But the recently enacted federal legislation fails to protect women in state prisons and county jails – a population that accounts for 85% of incarcerated women in America, according to a 2018 report by the Prison Policy Initiative.

This means thousands of pregnant inmates remain at the mercy of guards who can choose exactly how to control their every movement – as well as the movement of their unborn children.

“We dehumanize this group of women to such an extent that we don’t see how wrong this is – just how unnecessary and cruel it is,” says Lorie Goshin, associate professor at Hunter-Bellevue School of Nursing in New York and the lead investigator of a recent study about the treatment of incarcerated pregnant women.

Seventy-four percent of respondents in the 2019 study had cared for incarcerated pregnant or postpartum women. Of those women, 61% of the time, the reason given for shackling was not because the prisoners posed a risk to others, or a flight risk, but simply because “there was a rule or protocol” supporting shackling.

Currently, 23 states, says Lauren Kuhlik, Equal Justice Works fellow at the ACLU’s National Prison Project, do not have laws against shackling of incarcerated pregnant women, despite a 2010 United Nations rule that “instruments of restraint shall never be used … during labour, during birth and immediately after birth”.

Meanwhile, many prison employees lack understanding of an inmate’s legal rights. Not-for-profits try to fill the gap by distributing pamphlets to inmates and in support groups, explaining anti-shackling laws. 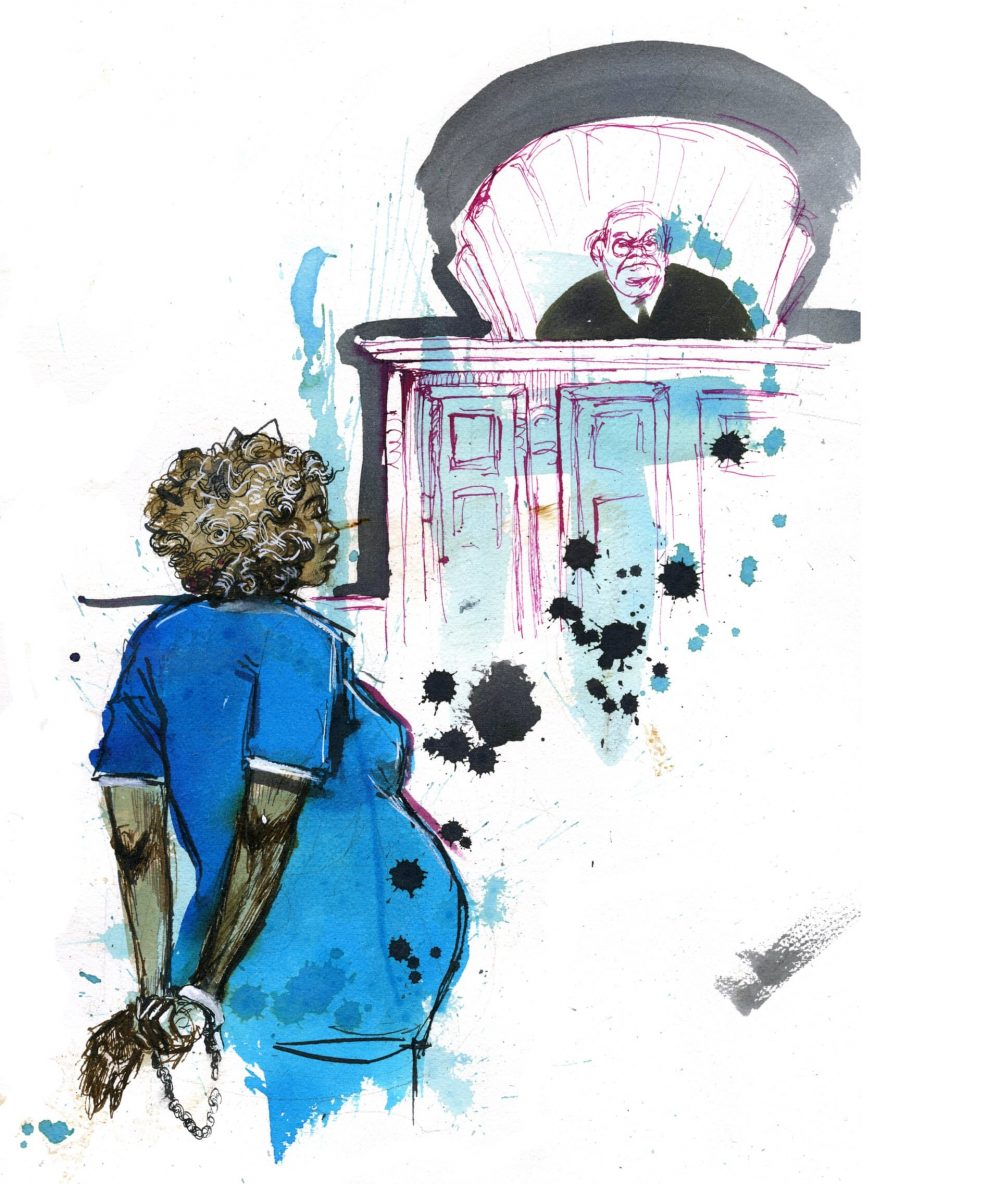 To convolute matters more, the federal government does not require prisons or jails to collect data on pregnancy and childbirth among female inmates. A bill introduced in September 2018 would have required such data collection. However, no action was taken on the bill.

Even the definition of shackling varies. Some states, such as Maryland and New York, ban all restraints immediately before and after birth, though there are exceptions in extraordinary circumstances. Other states, such as Ohio, allow pregnant women to be handcuffed in the front of their bodies, as opposed to behind their bodies, which is thought to be more destabilizing.

Then there is the delineation between shackling during pregnancy, active delivery and postpartum. Individual state laws are filled with nuances. As of 2017, Rhode Island is the only state that has what is called “a private right of action”, an enforcement mechanism allowing the illegally shackled woman to sue for monetary compensation.

The one constant: the acute psychological trauma that shackling inflicts.

“Women who get locked up, tend on average to have suffered many more childhood traumas, says Terry Kupers, MD, a psychiatrist and the author of the book Solitary: The Inside Story of Supermax Isolation and How We Can Abolish It. He implores prison staffs “to be very careful that we do not re-traumatize them. Because re-traumatization makes conditions like post-traumatic stress disorder much worse.”

Amy Ard, executive director of Motherhood Beyond Bars, a not-for-profit in Georgia, worries that the trauma of shackling takes a toll on the self-image of new mothers. Inevitably, this question looms in the minds of the women Ard works with: if I am someone who needs to be chained, how can I expect to also see myself as someone capable of protecting my child?

Harriette Davis, 64, once an inmate at the California Institute for Women in Corona, is now an anti-shackling advocate and remembers well the trauma of being handcuffed to a hospital bed before giving birth to her daughter 36 years ago. The attending doctor told the guard to remove the shackles, Davis says, so that Davis could move freely, helping her baby travel more easily down the birth canal.

In the final hour before her daughter was born, the guard finally removed the restraints.

Davis bursts into tears as she speaks by telephone from her home in Berkeley, California. “It’s inhuman and it’s not necessary and it’s emotionally and mentally unhealthy,” she says.

Davis, a black woman imprisoned for voluntary manslaughter of her abuser, says the shackling brought up the historical enslavement of her people, as well as continued injustices against them.

The United States incarcerates more people than any other country in the world. Women have become the fastest-growing gender group within that population, where black women are almost twice as likely to be incarcerated as white women, according to a 2019 report based on data from 2017 from the Sentencing Project, a research and advocacy group focusing on racial disparities in crime and punishment.

Advocates for prisoners point to some modest successes in their efforts to change punitive state and local laws. On 1 October, an anti-shackling law for pregnant women took effect in Georgia, House Bill 345, preventing shackling from the second semester through six weeks postpartum. That bill’s passage came just months after Danielle Edwards stood before a judge in Walton county, Georgia, shackled, pregnant and powerless.

Edwards, who was jailed for possession of methamphetamines and has one prior arrest for drug possession, says her addiction was an attempt to numb the longstanding pain of her grandfather’s death when she was five, and then a year after that, the sexual assault committed against her, and then the abusive relationship she found herself embroiled in as an adult. Edwards says she briefly beat back the addiction. But then her grandfather’s wife died and “I jumped right back into the drugs,” she says.

In the county jail, Edwards, 32, says another inmate threatened her and Edwards was put in 22-hour isolation cell. When she was taken to and from court hearings and doctors’ appointments, she was shackled, including leg irons and handcuffs. To prevent the metal around her ankles from cutting into her skin, Edwards wore two pairs of socks. Still, the shackling terrified her.

“It’s all very confining, uncomfortable and cold,” she says. “And it’s scary because when your feet have that limited mobility – you don’t know if you are going to misstep and fall on your stomach.”

She says that when she stood in her navy blue jumpsuit in front of the judge, she was eight and a half months pregnant. He looked over her charge and a sinking feeling overtook her, Edwards says. She pleaded with him to send her to rehab instead of prison. That way, she thought, she could keep her baby after the birth.

“And I’m standing there in shackles and once I asked him for that chance he said: ‘Do you actually think I am going to let you walk out of this courtroom? Absolutely not.’”

Lori Teresa Yearwood is a contributing editor at the Economic Hardship Reporting Project. Her work has appeared in The Washington Post, Slate, CNBC, The San Francisco Chronicle and The American Prospect, as well as other publications.