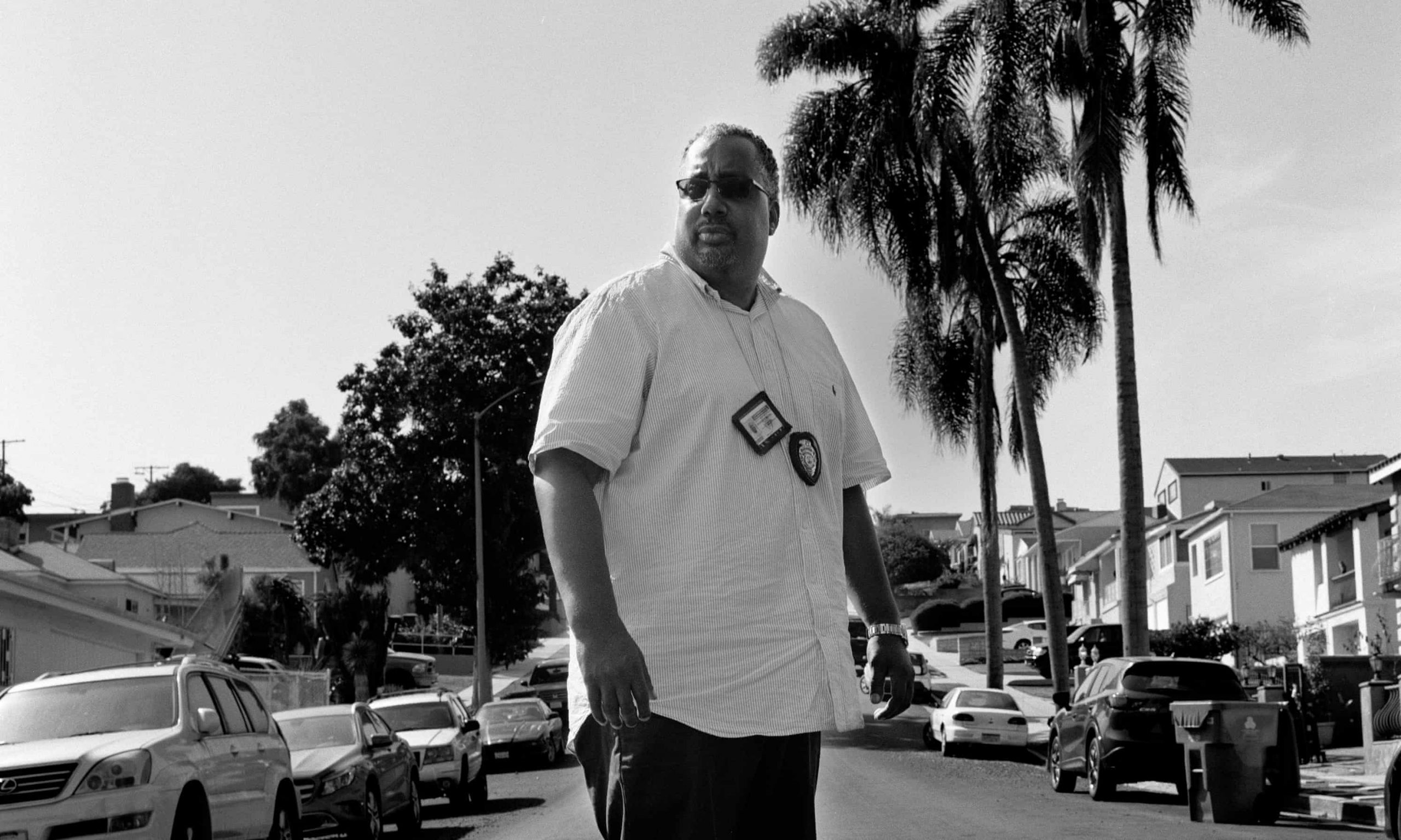 Officer Booker Waugh in the South Central neighborhood where he has lived all his life. Photo by Joseph Rodriguez
Criminal Justice

‘I don’t get an extra check for locking you up’: a week with an LA probation officer

Text by Lauren Lee White and photos by Joseph Rodriguez

On a Tuesday morning in October, Los Angeles deputy probation officer Booker Waugh made his way down a nearly sheer hillside, just a few feet from the entrance to the 10 freeway heading east.

Waugh, 48, was conducting a field visit to one of his probationers, a man named Joshua Bey. Bey lives in the affluent neighborhood of Cheviot Hills – not in a stately colonial house but in an orange tent, pitched between the freeway and a retaining wall, buffeted by old window blinds and a blanket decorated with kittens.

Hidden from the cars racing by below and the $2m homes above, Bey’s world is invisible unless you know where to look. 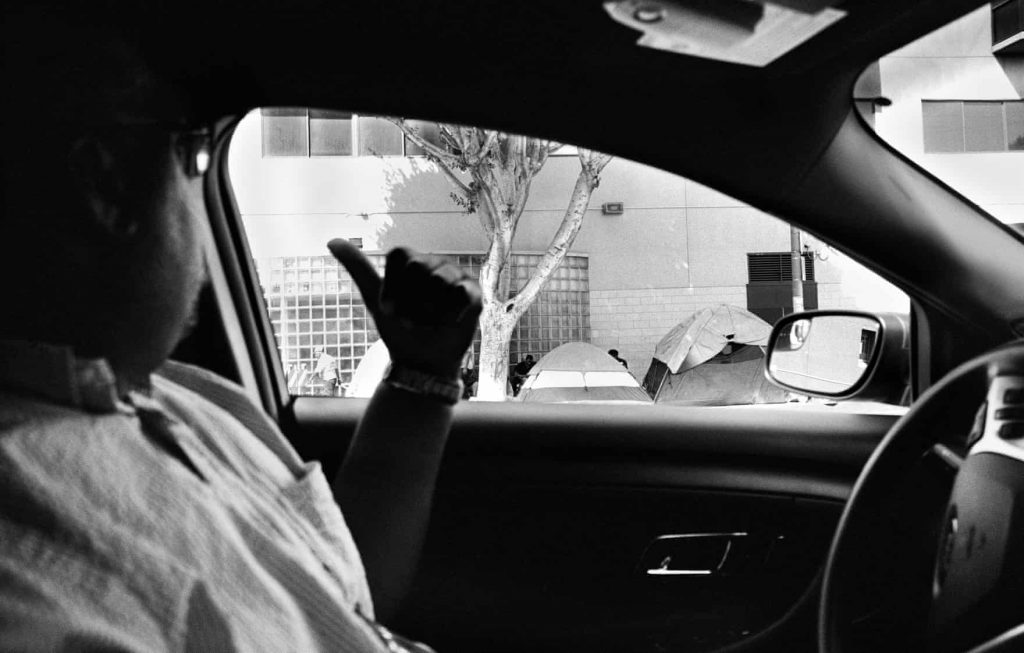 Booker Waugh does. Waugh is an officer with the Los Angeles county probation department, the largest agency of its kind in the nation. It oversees more than 35,000 adults under “community supervision”, meaning probation or parole.

Twenty of Waugh’s 38 clients are homeless. “We do this every day,” Waugh says about the challenges of his work. “You can’t let hopelessness get the best of you.”

More than 4.5 million people in the US were under community supervision in 2016, the last year for which the justice department has released data. That’s twice as many people as the number of people incarcerated, and a 239% increase since 1980, according to a study from the Pew Charitable Trusts.

There isn’t enough data on probation to determine the cause of this explosive growth with certainty, but we do know that the increase in probation has far outpaced any increase in crime. That suggests that departments have become more liberal with their use of probation. In the past few years, those liberal policies have been challenged by activists, scholars, and a remarkable number of top brass probation officials who aim to revamp what they view as a bloated, ineffective system.

But within individual departments, there are many probation officers like Waugh: drawn to the work because they want to help people who are struggling, and who see the job as equal parts social work and law enforcement.

Waugh, who has lived in south-central Los Angeles his entire life except for a stint attending the University of Hawaii, is a 15-year veteran of the probation department. Like most officers, he started his career in the county juvenile facilities.

“I don’t get an extra check for locking your ass up,” Waugh says he tells new clients. “I’m here to work with you, I’m here to help you. The less work I have to do the better.” 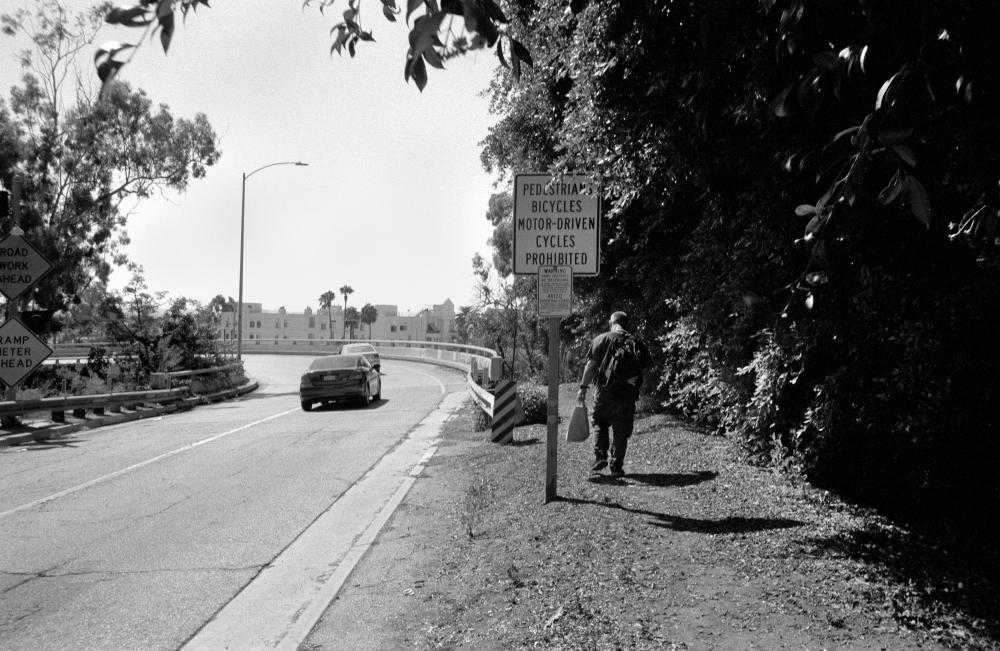 Waugh pays a visit to Joshua Bey’s encampment near the 10 freeway. 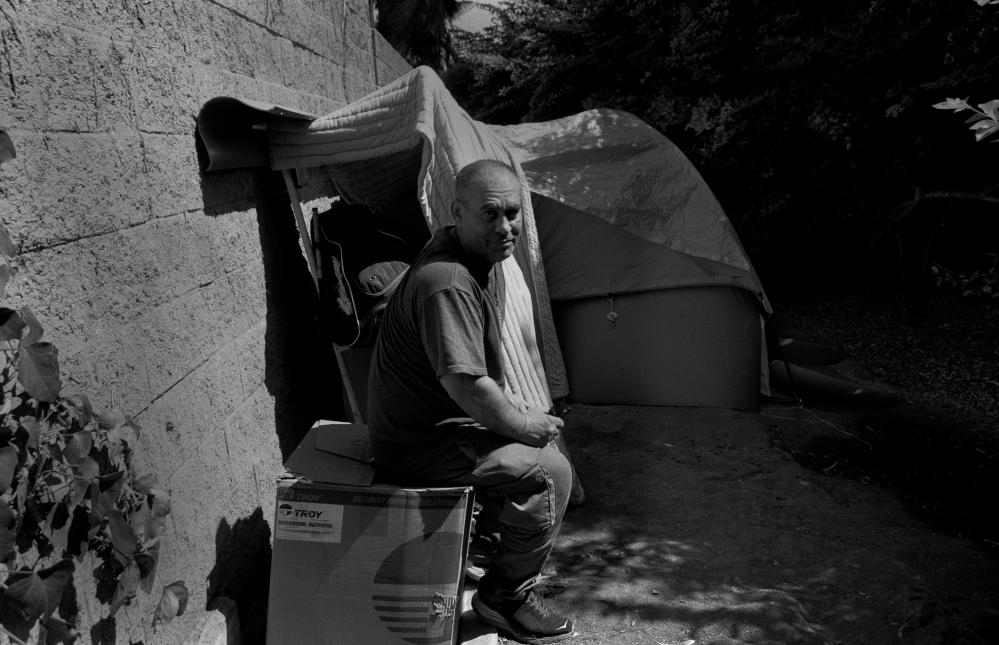 Joshua Bey in his tent, which is hidden between a hedge and a retaining wall.

On days when he goes into the field, Waugh sets out in the white Ford Taurus provided by the department, the radio tuned to a ’90s hip hop station. He visits clients in their home, shelter, tent or place of work, if they have one, and tries to get a sense of how the client is navigating re-entry from lockup. Are they employed? Sober? Lucid? He asks them if they need anything he can help provide, from facilitating a ride to mental health services to providing train fare.

At a shelter in Santa Monica, Waugh meets a client of three months, Earl Love.

Love’s hands tremble from Parkinson’s disease and, like a significant amount of probationers in Los Angeles county, he has been diagnosed with a mental health condition. Waugh visits him once a month, and has connected Love to a telecare medical team so he doesn’t have to travel to get support.

Love was incarcerated for most of his 46 years, he says. “I’ve been in the struggle all my life.” 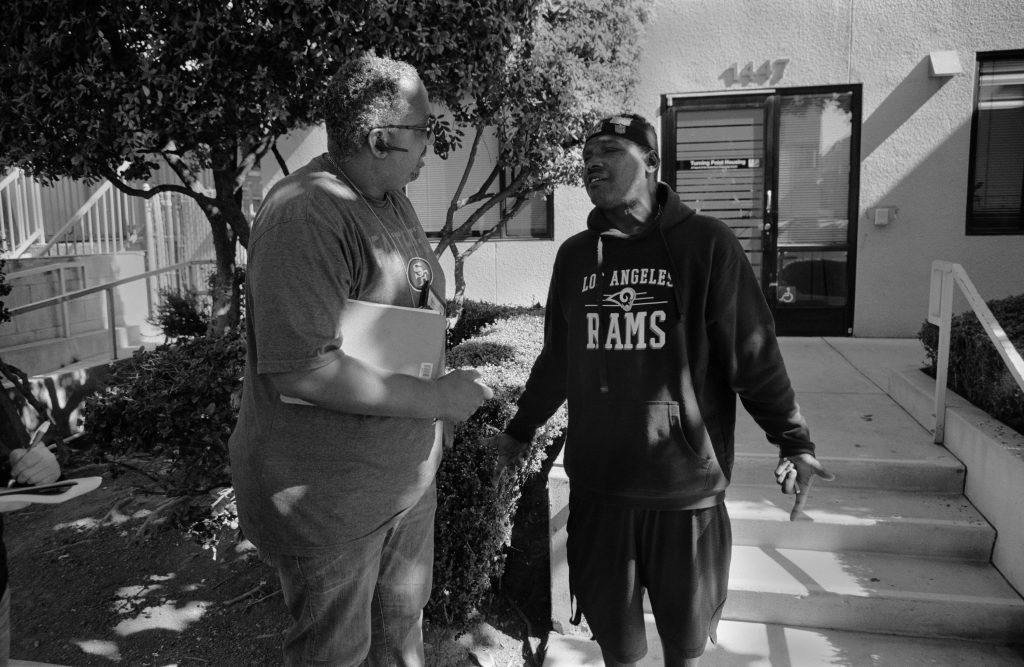 Waugh visits Earl Love, 46, a client at a Santa Monica homeless shelter who has been diagnosed with a mental health condition.

Later in the day, Waugh’s off to “the jungle”, the south-central Los Angeles neighborhood named after both its foliage and what Waugh calls its “antics”.

He’s visiting 55-year-old Derek Williams. Williams joined a gang in the late 1970s, but says he’s done with that lifestyle. “I don’t carry guns anymore. I hear a car backfire,” he mimics being startled. “I’m shell-shocked.”

Williams says his probation has gone smoothly because he is unencumbered by mental health struggles and has been able to comply with probation rules, which are strict. Requirements vary. All probationers have to call in to a special phone line daily, report to their officers regularly, submit to drug tests when instructed and not carry weapons. Many must attend mental health or substance abuse classes. Some can’t be around gang members if they have an injunction, others can’t open a checking account if they were charged with fraud, still others can’t access the internet unsupervised if they were charged with sexually assaulting a minor.

Those rules are there to help probationers, Waugh says, a safeguard to keep them from doing the same things again and again. Probationers can choose whether to follow them or not, he says. Still, he concedes, the rules’ stringency can be a setup for failure; if work hours coincide with required mental health treatment, for example, a probationer who skips the appointment to keep a job may end up back in jail.

The rules also make finding work – challenging for those in re-entry under the best of circumstances – even more difficult. Probationers may be told to come in to the office for a “pop-up” urine test with next to no notice, and given a narrow window of time within which to complete the test, though Waugh says they try to accommodate clients’ schedules.

Even for a probationer who truly wants to play by the rules and finish probation, it’s not easy. “There are lots of barriers to being successful,” Brian Lovins, the former assistant director of Harris county community supervision and corrections department and an advocate for probation reform, points out. “People don’t operate individually, there’s a host of family and social systems that keep them pressured into where they are in the world.” 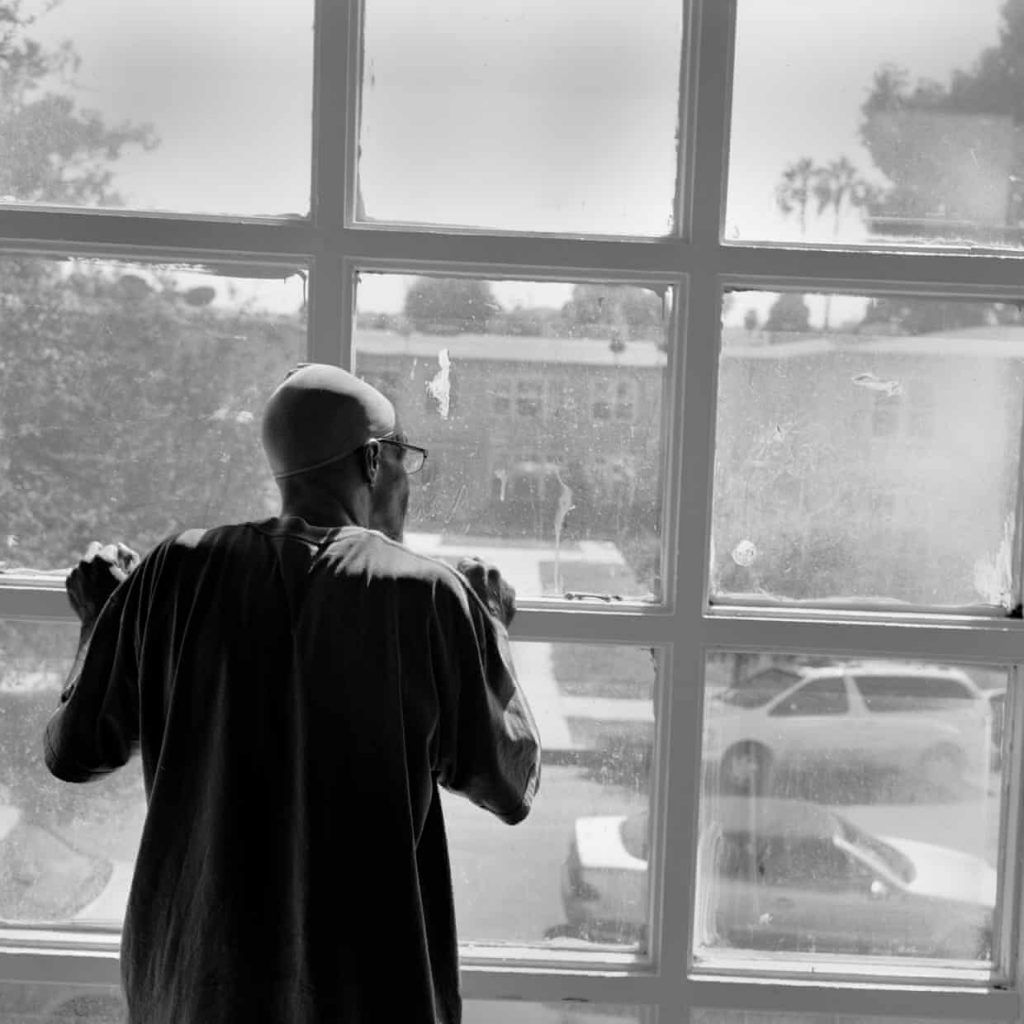 Derek Williams’ peers out of the window in his apartment building. 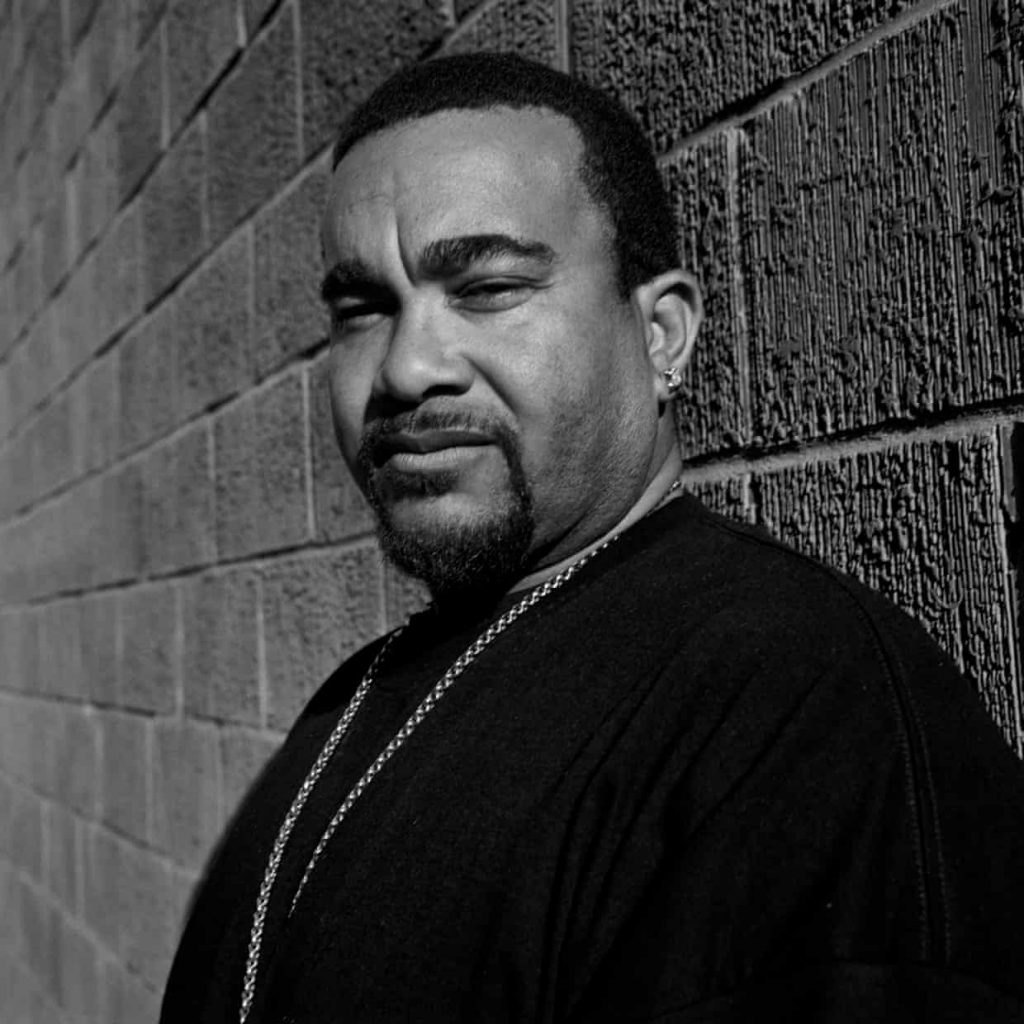 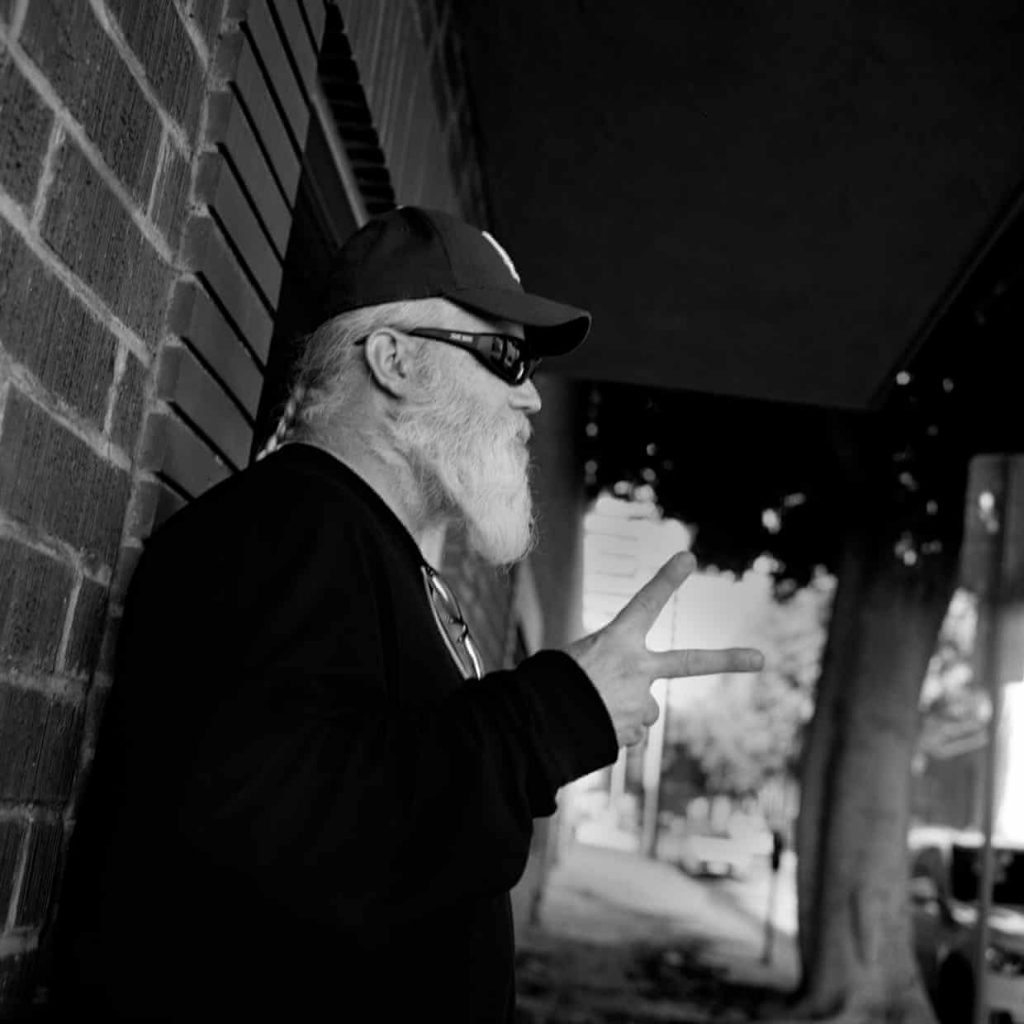 Jarrad Durke, a homeless US Navy veteran, is at the west LA office for his monthly check-in. 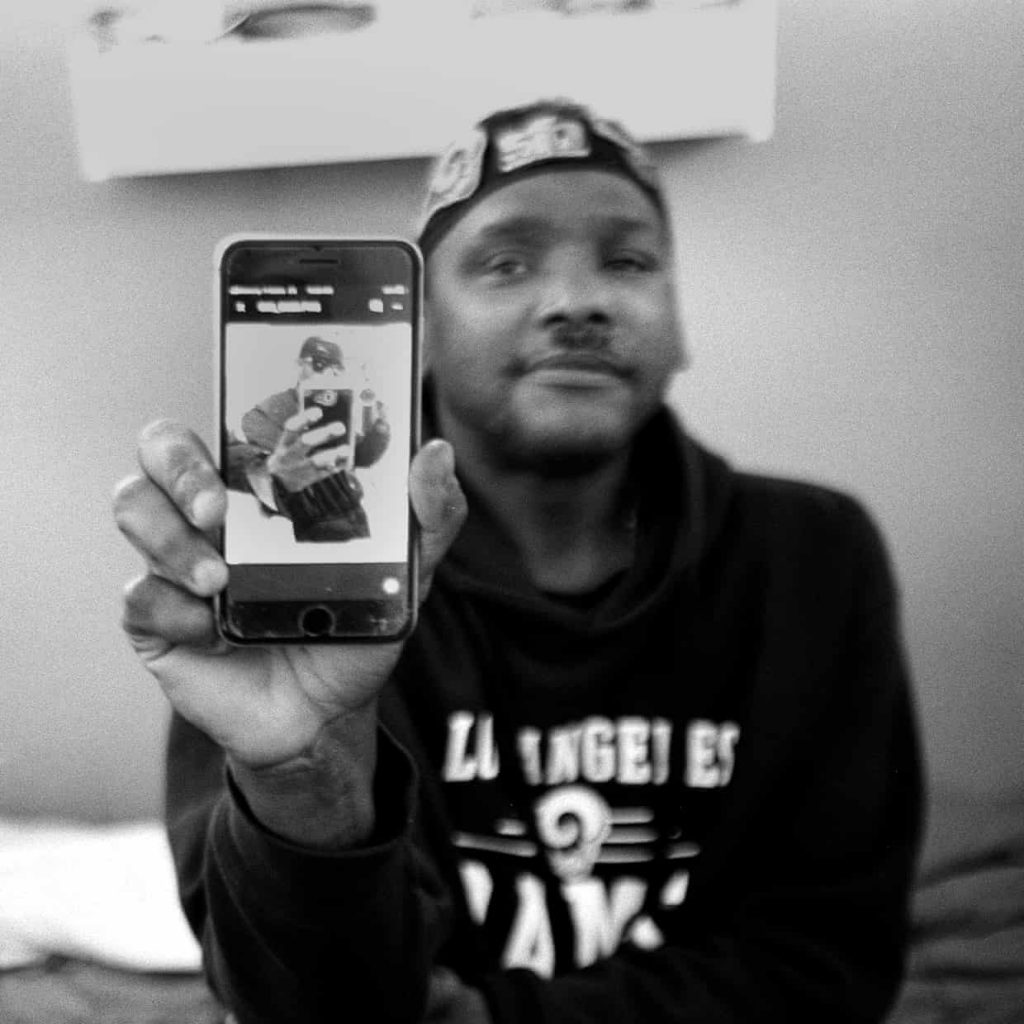 Earl Love shows off his photography.

Like most other probation officers in what Waugh calls “inner-city Los Angeles”, he currently has close to twice the number of clients he is supposed to manage. This means he gets less time than he’d like with clients, and he has to make some choices about where to direct his energy.

“You tend to drift toward the guys who want to help themselves versus the guys who keep getting arrested over and over,” Waugh says. “You have to decipher who wants my help and who is just here because they got put on probation out of jail.”

Today, however, he passes the time in his cubicle, surrounded by Lakers paraphernalia and a Colin Kaepernick action figure.

Waugh’s client Jeffrey Chenevert, 46, comes by for an office visit. He’s been working with Waugh for two and a half months and has failed two drug tests. Chenevert says his medications are affecting the test results.

Waugh tells him to bring in the medications at his next visit so he can determine whether that’s the case. “But if you mess up again,” he warns, “I’ll send the results in and you’ll be locked up again.” 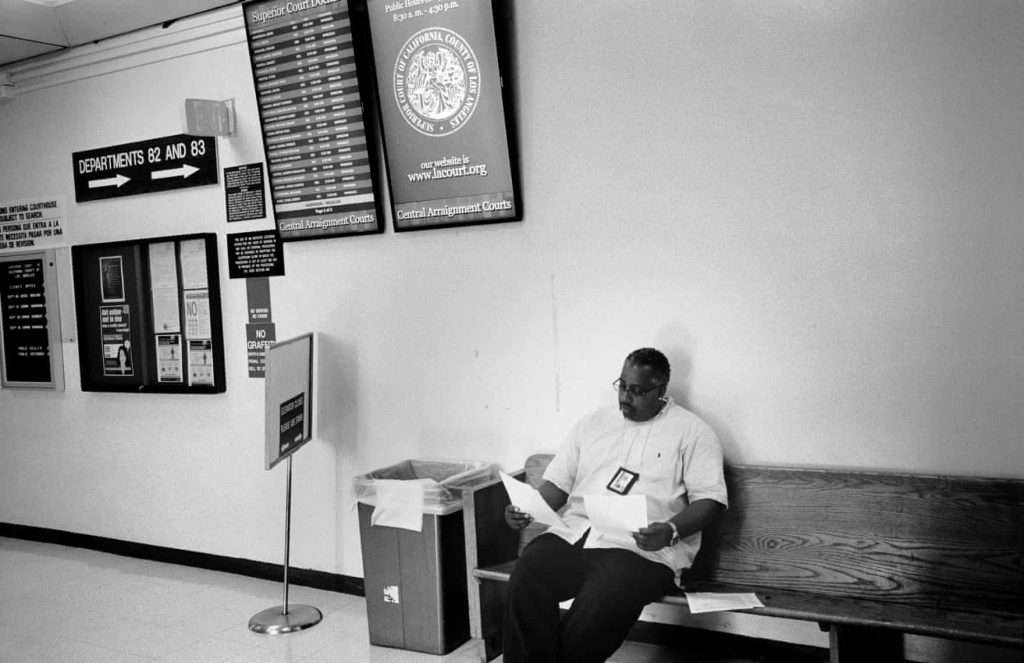 Waugh waits in the corridor at the central arraignment court in downtown Los Angeles.

Because this is Los Angeles, Waugh spends a lot of time in his car. He drives from his west Los Angeles office to the central arraignment court downtown, where his client Keion Anderson is appearing before a judge on a charge of assault with a deadly weapon.

Arrested 20 days earlier, Anderson stands silently in a plexiglass enclosure, craning his head downward to speak through a small opening in the wall when called upon to answer a question. Waugh is there to speak on Anderson’s behalf, telling the judge that prior to the arrest Anderson had been reporting consistently. The judge rules that Anderson should be released soon and must report to Waugh’s office within 48 hours.

Waugh makes his way back to the west side, passing through the vast Skid Row area. The day is bright, sunny and warm. Men and women sitting in lawn chairs line the sidewalks, the “Twice as Nice” ice cream truck has carnival music blasting through its speakers.

Waugh parks and strolls down the middle of Crocker Street, as tents, carts and stacks of possessions don’t leave enough room on the sidewalk for pedestrians. A former client, Donald Smith, 64, spots Waugh and shouts gleefully. Smith, a veteran originally from Alabama, was Waugh’s client for two years, through last spring. He soon begs off, confessing that he’s high on meth and doesn’t want Waugh to see him like this.

“I’mma call you when I’m sober,” he tells Waugh. “I love you with all my heart.”

He walks away. Waugh stands still for a moment, moved by the encounter. He’s glad that seeing him gave Smith a moment of reckoning. “Just from that, being embarrassed, that might straighten him out.”

Whether or not Waugh’s actions can really affect the course of Smith’s life is debatable. Still, Waugh is on the front lines of the system, and it’s up to him to keep faith enough to carry on with the work. 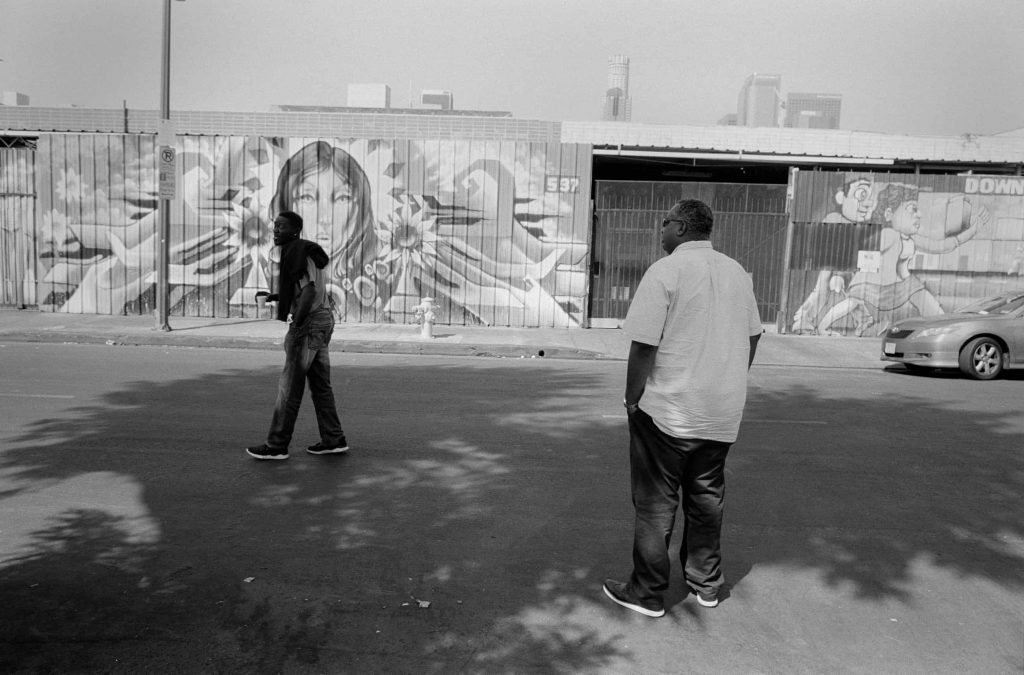 Walking through the Skid Row area of LA, Waugh runs into a former client.

Joseph Rodriguez is a documentary photographer born and raised in Brooklyn, New York. 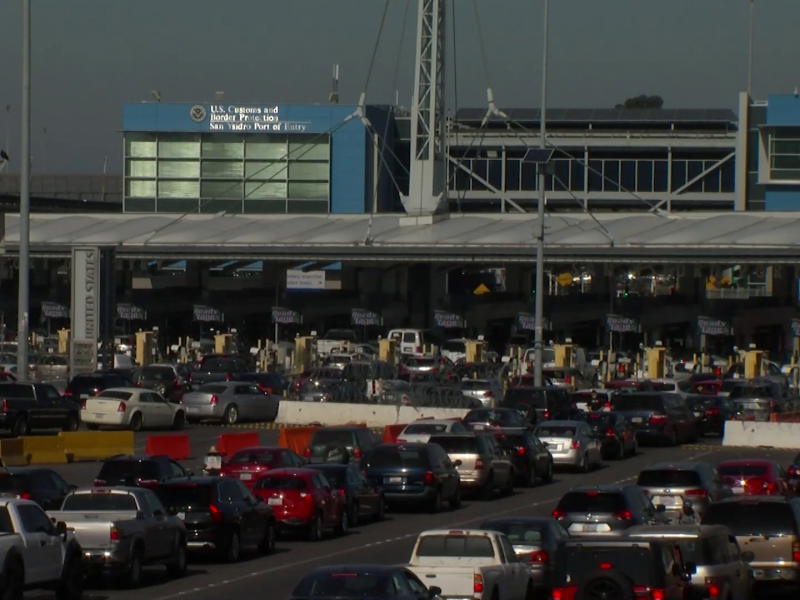