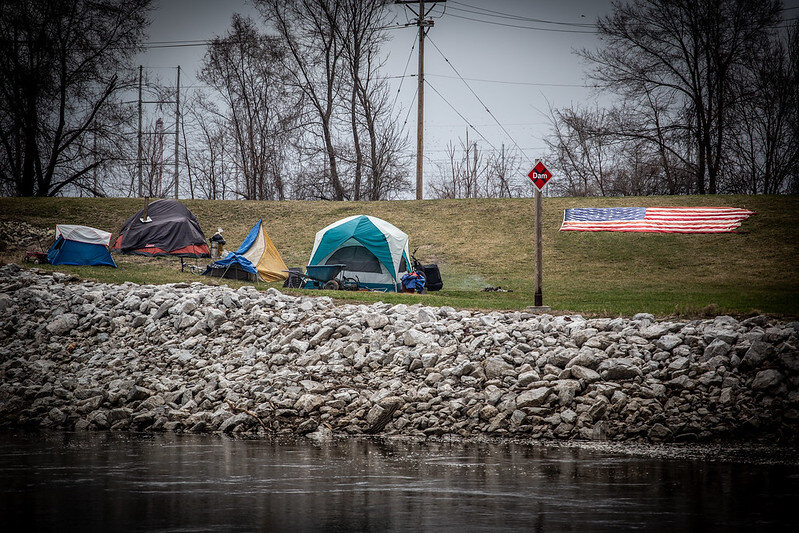 A homeless camp along the Raccoon River on the edge of downtown Des Moines displays a U.S. flag on the embankment. Photo by Phil Roeder
Business

Sylvester Miller, a 50-year-old with expressive brown eyes, is an auto technician at a manufacturing plant in Illinois. He was hired at 40 hours a week as a temporary service worker. Now, though, under the COVID-19 shutdown, Miller has been told to shelter in place at home—without pay— until further notice.

Problem is, Miller doesn’t have a home in which to seek refuge from the life-threatening virus. He lives in a transitional shelter for homeless men, called the Breakthrough, in Chicago’s East Garfield Park neighborhood, in a dormitory that sleeps an average of 30 other “testosterone-filled men prone to fighting,” he said, in beds uncomfortably close to each other.

Don’t get him wrong, Miller says. He’s supremely grateful for his rent-free bed and for the dining hall where he eats his complimentary meals with the others. But in this pandemic, it’s far from the luxury of having his own place. For one thing, he can’t ever self-isolate—the very thing so many Americans are complaining about having to do. And even though he has his own face mask that he got at work, he is vulnerable to the hygiene standards of the people with whom he must cohabitate.

“There was a guy who was dope sick and he threw up on my bed last week,” Miller said. “I had to take everything off my bed and wash it and then I had to clean up my area.”

Across the country, the working homeless—a population that the Metropolitan Washington Council of Governments estimated makes up 22 percent of homeless single adults and 25 percent of adults in homeless families—find themselves in versions of the same predicament during the COVID-19 crisis: There is no “home” from which to work remotely, let alone to seek refuge.

In a series of interviews with Slate that included telephone conversations and photographs shared by the interviewees, working homeless people from New York to Miami to Chicago to Salt Lake City talked at length about how they are attempting to cope with the pandemic. Their generally low-paying jobs put them at prolonged exposure to the coronavirus and their crowded communal living arrangements—accommodations ranging from tent encampments to the streets—put them at relentless risk for COVID-19 infection, a virus that thrives on human proximity and vulnerability.

“As we know, if you are healthy and have a healthy immune system, you may be exposed to it and you might not develop a serious illness,” said Bobby Watts, chief executive officer of the National Health Care for the Homeless Council in Nashville. “But because of homelessness, people are much more likely to have poorer nutrition and chronic sleep deprivation and therefore weaker immune systems.”

In Salt Lake City, Greg Young, general manager of transitional services for the Church of Jesus Christ of Latter-day Saints, offers triage services to an impoverished population that includes refugees, immigrants, and people coming out of incarceration. Some 40 to 60 of those people each week are working homeless folks, Young estimates.

Sequestered inside the safety of his own home after falling ill with what he feared was COVID-19—his attempt to get tested for the virus was denied, so he may never know his official diagnosis—Young said he has been talking to his clients via a phone recently installed for them outside his work building, now closed. Recently, Young counseled a woman who works as a gas station cashier and lives in a densely populated tent encampment alongside the Jordan River.

“I told her: ‘Do you realize what is going on? You need to stay in one place.’ ”

He knew the request was at odds with the conditions of the woman’s daily life, which keep her traversing the city to connect with the people who can give her the resources that she needs. She still needed to get back and forth from the food pantries for which she had been given vouchers for free groceries, to keep appointments with case managers trying to help her attain better paying employment, and to visit apartment houses where she needed to put her name on waiting lists for low-income housing.

“I hear so many people complaining about having to be quarantined in their homes,” Young said, “and these people are out in the elements being told that they cannot intermingle with others or go into big crowds and yet that is exactly what they need to do to find what they need to survive.”

That same bind is glaringly obvious in Oakland Park, Florida, where 55-year-old John Scammon said the only way he was able to create a job for himself during this pandemic was to step directly into the commotion of a 24-hour gas station.

Every day, along the stretch of Prospect Road, Scammon, a stocky man with a gray beard and tattooed arms, pumps gas and opens the front door to the station’s convenience store for those who don’t want to put themselves in possible contact with COVID-19 by touching the handles themselves.

Scammon’s voice echoed against the walls of the gas station restroom where he’d gone to talk on a friend’s phone.

“The coronavirus thing can’t mess with me, ma’am,” he said. “I drink a lot of beer and smoke a lot of pot. It will run from my system.”

Scammon says the gas station doesn’t pay him and “I never ask nobody for nothin’.” But the customers generally tip him between $40 and $50 a day. He loves the dignity of making his own money, 10 percent of which he tithes to his church, the Solid Rock Ministry, down the street from the gas station: “Every day, I put the money in the door between the deadbolt and the door frame, ma’am.”

“John is a very sensitive human being and he loves God,” Delaney said. “He is not lazy and he is not crazy. He is a homeless man who has an addiction problem and is down on his luck. He is excited to work and makes his contributions to the church. What else is there to say? God has got to bless him.”

Meanwhile, the pastor provides Scammon with new shoes, warm meals after Tuesday night Bible study meetings, gloves, and hand sanitizer. Scammon says he is appreciative of the protective measures but points out that, for all the sanitary measures, he often sleeps next to a dumpster.

In New York City, there are two things that Michael Anatole, a 55-year-old, college-educated homeless man living at the New York City Rescue Mission, wants people to know: First, homelessness can happen to anyone. He graduated from Pace University in 1985 with a bachelor’s degree in management information systems, he says. Now he makes $45,000 a year working for the city gathering essential data for its computer systems. The average cost of a studio rental in New York City is $1,889 per month, according to a 2019 article from Smart Asset.

Anatole, a serious-looking man with an eloquent way of expressing himself, has been living at the New York City Rescue Mission since November, when he says his landlord locked him out of the room he was renting because Anatole owed approximately $1,000 in back rent. Though he said he doesn’t want to go into the personal details about what sparked his homelessness, he did say that he was depressed and that the depression played into a spate of absenteeism from work, causing loss of pay. These days, Anatole pays the Rescue Mission 20 percent of his income to stay at the shelter, allowing him to save money to move into a studio in one of the city’s outer boroughs, hopefully by June.

But that all depends on the infection rates, death tolls, and economic devastation due to the coronavirus, he points out. Like so many other Americans, Anatole is worried about the stability of his job.

“The mayor has gone on record saying city agencies are going to have to make reductions due to the current economic conditions,” Anatole said.

Which brings Anatole to his second point.

He feels vulnerable, he says—every second of every day.

In his best attempt to protect himself, Anatole eats alone, purposefully staggering his meal times so that he can stay away from the shelter’s other men, who don’t always cover their mouths when they sneeze and cough, Anatole has noticed. He uses liberal amounts of hand sanitizer and Clorox wipes, which he buys at a local CVS. Every time he uses one of the shared restrooms, he wipes it down with the disinfectant before and after he uses the facilities.

And each day, as an essential worker, he gets on the bus and keeps going to work. He wears gloves during his three-stop commute and doesn’t touch his face or stand close to anybody.

Lori Teresa Yearwood is a trauma-informed, freelance journalist who works as a contributing editor for the Economic Hardship Reporting Project. Her articles have appeared in the Washington Post, CNBC, the San Francisco Chronicle, and the American Prospect, among others.